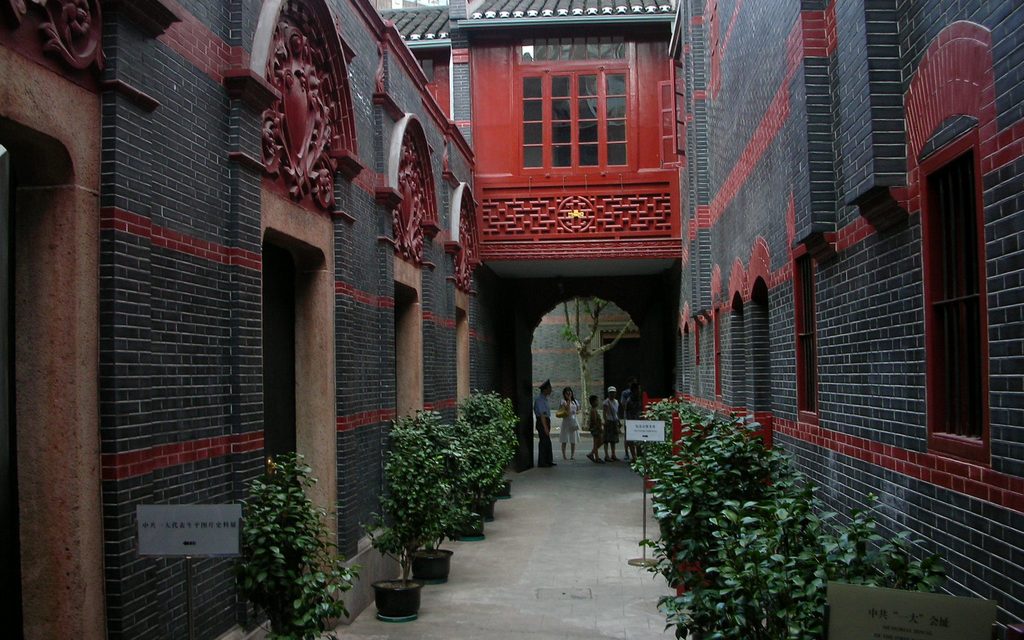 The site of the First National Congress of the Communist Party of China. Image available at Wikimedia Commons under CC license.

In a report yesterday, CMP noted the release by the Central Office of the CCP of a propaganda blueprint for the promotion of the 100th anniversary of the Party this year. The “Notice,” which was reported on the front page of the People’s Daily, defines the key propaganda themes that will likely dominate the Chinese media in 2021.

Below is our brief analysis of six key points gleaned from the list of 80 slogans.

There are a total of 80 entries, each ending with an exclamation point. The slogans toward the end of the list appear to intensify in terms of emotional charge.

Only 4 of the 80 slogans mention Xi Jinping. Those phrases are:

“Adhering to Marxism-Leninism, Mao Zedong Thought, Deng Xiaoping Theory, the important idea of the “Three Represents,” the Scientific View of Development and Xi Jinping Thought on Socialism With Chinese Characteristics for the New Era as the guide!” (坚持以马克思列宁主义、毛泽东思想、邓小平理论、“三个代表”重要思想、科学发展观、习近平新时代中国特色社会主义思想为指导!)

“Xi Jinping Thought on Socialism With Chinese Characteristics for the New Era is the guide of action in the struggle toward realizing the great rejuvenation of the Chinese people!”( 习近平新时代中国特色社会主义思想是全党全国人民为实现中华民族伟大复兴而奋斗的行动指南！)

“Strengthening the ‘Four Consciousnesses,’ remaining firm in the ‘Four Confidences,’ and achieving the ‘Two Protections’!’” (增强“四个意识”、坚定“四个自信”、做到“两个维护”!)

“Uniting closely around the Central Committee of the CCP with Comrade Xi Jinping as the core, seizing new victories in the comprehensive building of a modern socialist nation!” (紧密团结在以习近平同志为核心的党中央周围，夺取全面建设社会主义现代化国家新胜利！)

The first two phrases above include Xi Jinping’s so-called “banner term” (旗帜语), the phrase that is meant to encompass his ideas and legacy. One question to continue watching is whether or not this lengthy phrase will be formally shortened in the coming months within the CCP discourse, making it “Xi Jinping Thought” (习近平思想).

But there are a number of other slogans attributed to Xi and closely associated with him, including these two phrases about sustainable development:

“Not relaxing in our insistence on the green mountains, placing our feet solidly on the ground and working hard!” (咬定青山不放松，脚踏实地加油干！)

In a previous article, CMP dug a bit deeper into the second phrase above, which despite characterization as a Xi invention in state media propaganda was not originated by Xi.

Additionally there is one phrase along these lines that seems to have been chosen because the 100th anniversary of the CCP falls in the Year of the Ox: “carrying forward the spirit of serving the people as the ox calf, of innovation and development as the pioneering ox, and ardent struggle as the old yellow ox” (发扬为民服务孺子牛、创新发展拓荒牛、艰苦奋斗老黄牛的精神).

There is strong emphasis on “unity” in many of the phrases on the list of 80. The word “unity” itself appears 6 times, with phrases mentioning unity among various ethnicities and unity around the CCP Central Committee with Xi Jinping as the core. There is also strong mention of the notion of a “New Era,” which appears 5 times, of “socialism with Chinese characteristics,” which appears 15 times, and “the people” (人民), which appears 37 times.

The propaganda slogans include a number of references to the international situation, with indirect reference to the United States. For example:

“Making overall strategic planning for the great rejuvenation of the Chinese nation and great changes such as the world has not seen in a century!” (统筹中华民族伟大复兴战略全局和世界百年未有之大变局!)

“No person and no force can stop the march of the Chinese people toward better lives!” (任何人任何势力都不能阻挡中国人民实现更加美好生活的前进步伐!)

Interestingly, there are no references among the slogans to “Belt and Road” or to a “community of common destiny for mankind,” both key aspects of so-called “Xi Jinping Thought on Diplomacy” (not mentioned either). However, there is mention of a “Chinese national community” (中华民族共同体), which appears in the phrase: “Firmly casting a consciousness of the Chinese national community, promoting the common unity and struggle of all ethnic groups, and common prosperity and development!” (铸牢中华民族共同体意识，促进各民族共同团结奋斗、共同繁荣发展!”).

The three phrases at the tail end of the propaganda slogan list are a shout-out to 14 categories of people. They include: workers, farmers, intellectuals, the People’s Liberation Army, the compatriots from Hong Kong, Macao and Taiwan, and people from various countries who are friendly with the Chinese people. For example, the following slogans:

“We offer tribute to the vast workers, farmers, intellectuals, various democratic parties, various people’s groups, patriots from all walks of life, to the commanders of the People’s Liberation Army, to the officers and soldiers of the People’s Armed Police, to public security officers!” (向全国广大工人、农民、知识分子，向各民主党派、各人民团体、各界爱国人士，向人民解放军指战员、武警部队官兵、公安民警，致以崇高的敬意!)

“To all the people and friends of all countries who live in friendship with the Chinese people and care for and support the cause of Chinese revolution, construction and reform, we extend our heartfelt gratitude!” (向一切同中国人民友好相处，关心和支持中国革命、建设、改革事业的各国人民和朋友，致以衷心的谢意!)