Source: NYT (4/2/21)
A Chinese ‘Auntie’ Went on a Solo Road Trip. Now, She’s a Feminist Icon.
Tired of housework and an unhappy marriage, a 56-year-old woman has been on a six-month jaunt across China that has challenged deep-rooted gender norms.
By Joy Dong and Vivian Wang 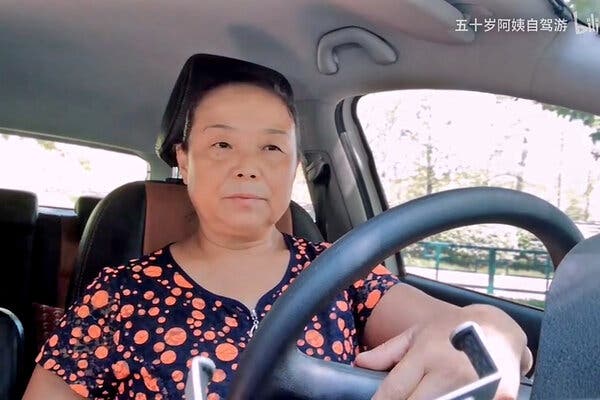 “Why do I want to take a road trip?” asked Su Min, a 56-year-old retiree from Henan Province in central China. “Life at home is truly too upsetting.”

She spends each night alone, curled up in a four-and-a-half by eight-foot rooftop tent, balanced on stilts above her car. She often eats her meals in parking lots. She has seen her daughter and grandchildren only once in the past six months, and her husband not at all.

Su Min, a 56-year-old retiree from Henan Province in central China, has never been happier.

“I’ve been a wife, a mother and a grandmother,” Ms. Su said. “I came out this time to find myself.”

After fulfilling her family’s expectations of dutiful Chinese womanhood, Ms. Su is embracing a new identity: fearless road-tripper and internet sensation. For six months, she has been on a solo drive across China, documenting her journey for more than 1.35 million followers across several social media platforms.

Her main appeal is not the scenic vistas she captures, though those are plentiful. It is the intimate revelations she mixes in with them, about her abusive marriage, dissatisfaction with domestic life and newfound freedom. Her blunt but vulnerable demeanor has made Ms. Su — a former factory worker with a high school education — an accidental feminist icon of a sort rarely seen in China.

Older women send her messages about how painfully familiar her story feels, and greet her at each destination bearing fruit and home-cooked meals. For younger women, she is a font of advice about marriage and child-rearing. “I wish my mother could be like Auntie Su and live for herself, instead of being trapped and locked in by life,” read a comment on one of her videos.

Her unexpected popularity speaks to the collision of two major forces in Chinese society: the rapid spread of the internet, and a flourishing awareness of gender equality in a country where traditional gender roles are still deeply rooted, especially among older generations.

“Before, I thought I was the only person in the world who wasn’t happy,” Ms. Su said in an interview from inside her beige tent. She was leaving tropical Hainan, China’s southernmost province, headed for Guilin, a city famed for its lush hills, about 500 miles away.

Only after sharing her videos online, she said, “did I realize there were so many people like me.”

Before last fall, Ms. Su had rarely traveled. But she had long been enamored with the idea of driving. Growing up in Tibet, she sometimes missed the school bus home and had to walk 12 miles through the mountains, she said. Each time a truck passed by, she imagined sitting behind the wheel, safe and comfortable. But cars were rare, and having one seemed impossible. 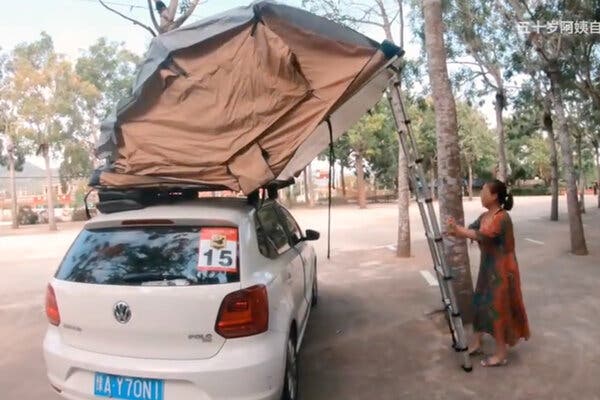 Ms. Su spends each night alone, curled up in a four-and-a-half by eight-foot rooftop tent, balanced like a treehouse on stilts above her car.

At 18, she moved to Henan and worked in a fertilizer factory. Five years later, she married her husband. They had met only a few times — not uncommon at the time — but she thought marriage might be a way out of the endless chores she shouldered at home.

Instead, she said, she found herself laden with even more housework, as well as verbal and physical abuse. Her husband would disappear for long stretches and then hit her if she asked where he had been, she said; once, he beat her with a broom.

Still, Ms. Su said, she never considered leaving, worried about a social stigma that is still pervasive in much of China.

She resigned herself to her life at home. Her daughter gave birth to twins in 2017, and Ms. Su was in charge of watching them — a task that she was happy to do, but that kept her tied to her home. Though age had cooled her husband’s temper, they barely spoke. When they did, they argued.

She sought solace in novels about time-travel and romantic Korean soap operas but still felt deeply lonely. During especially heated arguments with her husband, she would faint, she said. A doctor eventually told her she had depression.

Then, in late 2019, she came across a video online of someone introducing their camping gear while on a solo road trip. She remembered her childhood dream of driving — the freedom and comfort it had represented.

Over the following months, she devoured every video she could find about road trips. She took copious notes: which apps they used to find campsites, which tricks they had for saving money. (Showers at public bathhouses, she learned, could be bought in bulk).

Soon, she made up her mind: Once her grandsons entered preschool, she would embark on a trip of her own. She had bought a small white Volkswagen hatchback several years earlier, with her savings and a monthly pension of around $300.

Her family was resistant. Ms. Su reassured her daughter that she would be safe. She ignored her husband, who she said mocked her.

On Sep. 24, she fixed her tent to the top of the car, packed a mini-fridge and rice cooker, and set off from her home in the city of Zhengzhou.

She posted video updates as she drove, and in October, one of them went viral on Douyin, the Chinese TikTok. In it, she described how oppressed she had felt by housework and her husband.

“Why do I want to take a road trip?” she sighed. “Life at home is truly too upsetting.”

Millions watched the video, sharing it with hashtags like “runaway wife.”

Ms. Su continued across the country, visiting historical Xi’an, mountainous Sichuan and the old town of Lijiang — covering more than 8,500 miles so far. She saved on highway tolls by taking country routes. At night, she unfolded her tent atop her car like an accordion, feeling safer up high. Before setting out again each morning, she draped her wet towel on a clothesline strung across the back seat.

In her videos, she marveled at her newfound freedom. She could drive as fast as she wanted, brake as hard as she liked. At each stop, she made new friends, she said. Wrapping dumplings on camera in a Hainan parking lot in February, she laughed when tourists passing by asked who was traveling with her.

“I love eating hot peppers, but my family doesn’t like them, so I had to make myself not eat peppers,” she said in an interview. “Now after coming out, I can eat peppers every day.”

She has sometimes encountered hostility. Once, she said, a man asked how she could air her family’s private affairs and said he would beat her if they ever met in person.

She replied, “Good thing I haven’t met you.”

Ms. Su’s daughter, Du Xiaoyang, who visited her in Hainan last month, said her mother was a new person.

“Anything she wants to do, she just does, whereas before she seemed afraid of everything,” Ms. Du said.

In March, Net-a-Porter, the luxury shopping website, even featured Ms. Su in an advertisement for International Women’s Day. 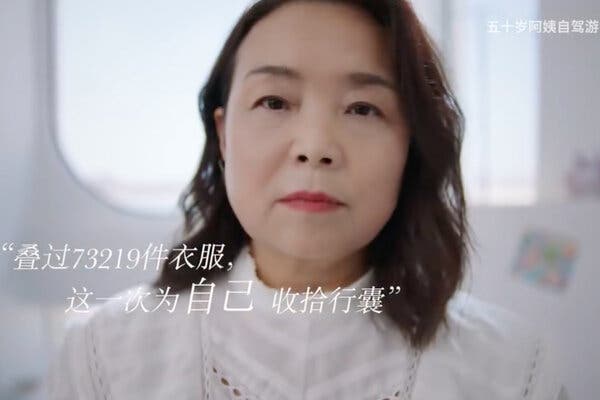 Still, Ms. Su blushes when asked about her new fame. She also says she is not yet qualified to claim the mantle of feminist. “It took me so many years to realize that I had to live for myself.”

She paused: “It’s something I’m waking up to, not something that I just am.”

There are limits to what she is willing to change. Though she is determined to move out if her husband continues to treat her badly, she says she doesn’t want a divorce, knowing that her daughter would feel obliged to care for him if she left.

But she tries not to dwell upon that eventual homecoming. First, she plans to cover all of China. That could take a few years.

“Now that I’ve finally come out, now that I want to leave behind that life, I need time to let it melt away,” she said. “There are many things that, as time passes, may have an outcome you never imagined.”

Vivian Wang is a China correspondent. Previously, she covered New York State politics for the metro desk. She was raised in Chicago and graduated from Yale University. @vwang3