Source: NYT (3/31/21)
Hong Kong Court Convicts Democracy Leaders Over Protest March
阅读简体中文版 | 閱讀繁體中文版
The defendants, including the media tycoon Jimmy Lai and the barristers Martin Lee and Margaret Ng, were some of the city’s most prominent activists.
By Austin Ramzy 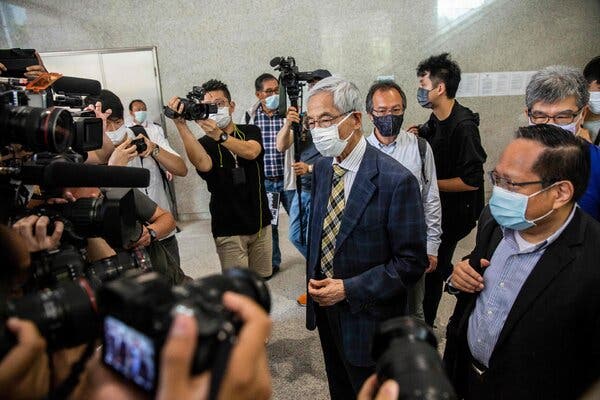 HONG KONG — Seven of Hong Kong’s veteran pro-democracy leaders were found guilty on Thursday of unauthorized assembly, a verdict seen by their supporters as a severe assault on the freedom of speech and other civil liberties that once were core to the city’s identity.

Martin Lee, an 82-year-old barrister known as the “father of democracy” in Hong Kong; Jimmy Lai, 73, a media tycoon and founder of the staunchly pro-democracy Apple Daily newspaper; and Margaret Ng, 73, a respected barrister and columnist, along with four others, were convicted of participating in and organizing an unauthorized march in 2019.

They each face up to five years in prison, and sentences will be handed down on April 16. A severe penalty would be seen by critics of the government as an attempt to muzzle some of the most prominent and internationally recognized figures in Hong Kong’s democracy movement. It would also send a strong message about how the courts may rule in several other trials this year on similar charges of illegal assembly.

Before the hearing, some of the defendants rallied outside the court, holding a banner that read, “Oppose Political Persecution; Protest Political Suppression.” Inside the courtroom, supporters seated in the gallery cheered them on, shouting: “Keep up your spirits!”

Hong Kong’s authorities have overseen an expansive crackdown on the pro-democracy movement since the city was engulfed by antigovernment protests in 2019. More than 2,400 people have been charged as the authorities sought to quash the movement, which had posed the greatest challenge to Beijing’s rule in decades.

Beijing has sought to depict several of the opposition figures as subversive elements working with hostile foreign forces to undermine Chinese sovereignty. Critics of this view say the ruling Communist Party is only deflecting the true democratic aspirations of the Hong Kong people.

Mr. Lee, Mr. Lai and Albert Ho, a lawyer and former lawmaker who was also convicted, have been denounced in Chinese state media as being part of a “Gang of Four” who stirred unrest in 2019, an accusation at odds with the largely leaderless movement in the streets. 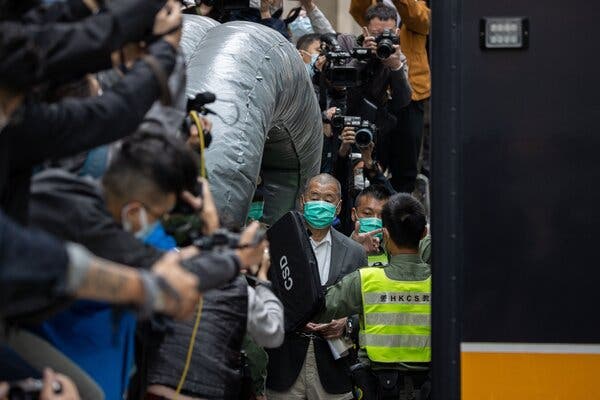 The Hong Kong media mogul Jimmy Lai outside the Court of Final Appeal in Hong Kong, in February. Credit…Jerome Favre/EPA, via Shutterstock

Human rights advocates were sharply critical of the convictions, labeling them as part of an effort to undermine the long-running campaign for democracy in Hong Kong.

“This trial was also about the long history, legacy and contributions of the elder statesmen and women of the movement,” said Samuel Chu, the managing director of the Washington-based Hong Kong Democracy Council. “It is about discrediting their lifetime contributions to Hong Kong, to the movement, to workers, to grass-roots, to individuals and their professions.”

The case centered on a rally on Aug. 18, 2019, when hundreds of thousands of people gathered in an antigovernment protest.

That gathering had received police approval. But what followed did not. The defendants were accused of leading protesters out of Victoria Park on Hong Kong Island, beginning a march that led toward the core business district. While there was no violence and minimal disorder, prosecutors argued that the march violated Hong Kong’s public order ordinance.

Their lawyers argued that leading protesters out of the park, which had filled with many more people than it could handle, was necessary for public safety. They also said that imprisoning them over a peaceful march was a heavy-handed application of the law.

“Of course we are very disappointed with the verdict, because what we have done is only exercising our constitutional right,” one defendant, the labor leader Lee Cheuk-yan, said after the hearing. “But it’s a badge of honor for us that we are convicted for walking together with the people of Hong Kong for democracy and freedom.”

The protests that summer were focused at first on a proposal to allow extraditions to mainland China but expanded to include demands for direct elections and an investigation into the use of force by the police.

The prosecution of the city’s pro-democracy leaders over a peaceful protest has drawn an international outcry. David Perry, a prominent British lawyer who was hired to lead the prosecution, dropped the case after coming under sharp criticism at home. Dominic Raab, the British foreign secretary, had said that Mr. Perry was “pretty mercenary” and was giving the Chinese government a public relations win. 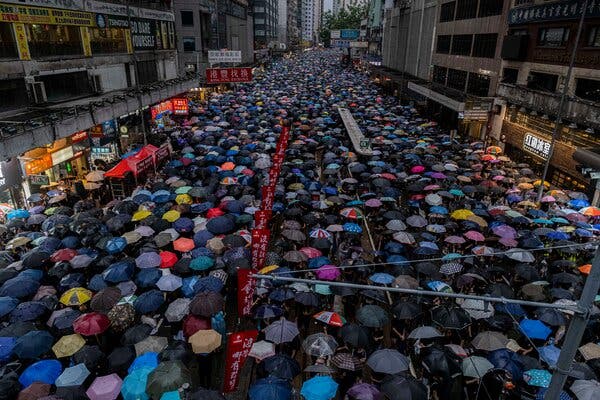 Marchers packed the streets in an antigovernment protest in Hong Kong on Aug. 18, 2019. Credit…Lam Yik Fei for The New York Times

The State Department, in an annual report on Hong Kong issued Wednesday, said that the Hong Kong government “did not respect” the right to free assembly provided under local law, and that by imposing a national security law last year, China had “dramatically undermined rights and freedoms in Hong Kong.”

The trial took 20 days, twice as long as had been scheduled. The others who were convicted Thursday were the former lawmakers Cyd Ho and Leung Kwok-hung.

The authorities have also used a sweeping new national security law to quash protests and cripple the opposition movement. Forty-seven pro-democracy politicians and activists have been charged with subversion under that law for participating in an election primary that prosecutors say was part of a plan to subvert the government.

Mr. Lai, the media tycoon, has been charged in a separate national security case on accusations of lobbying for American sanctions against Hong Kong and Chinese officials. 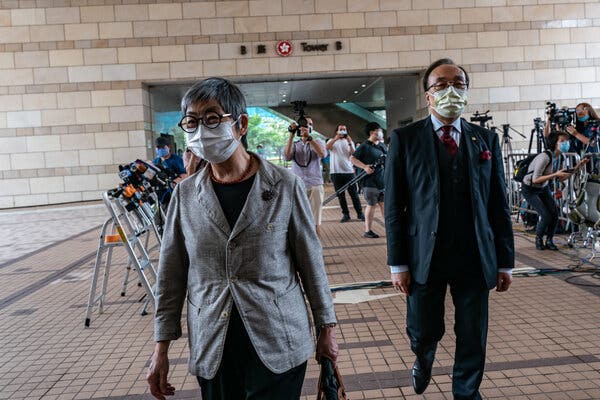 The lawyer Margaret Ng in May. She was among those convicted on Thursday. Credit…Anthony Kwan/Getty Images

Austin Ramzy is a Hong Kong reporter, focusing on coverage of the city and also of regional and breaking news. He previously covered major events around Asia from Taipei and Beijing. @austinramzy