Source: The Guardian (3/24/21)
China’s rural revolution: the architects rescuing its villages from oblivion
By Oliver Wainwright 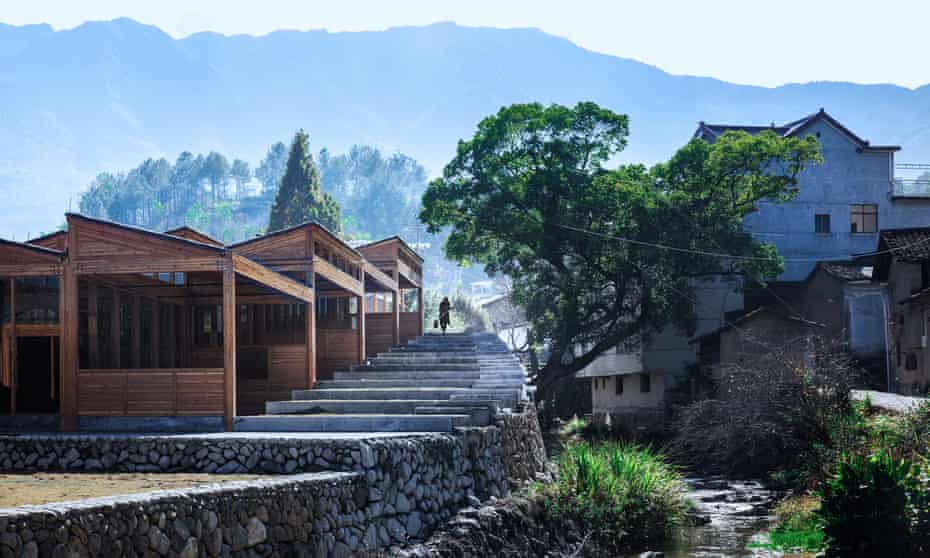 After 20 years of frantic city-building, rustic China is in a death spiral. Now architects are helping to reverse the exodus – with inspirational tofu factories, rice wine distilleries and lotus tea plants

In the remote Chinese village of Caizhai, a series of wooden pavilions step down a slope next to a babbling brook, their pitched tiled roofs echoing the rocky peaks of the mountains behind. Through big picture windows, day-trippers look inside, watching big barrels of soya make the journey from bean to tofu, passing through different rooms for soaking, grinding, pressing and frying, in a mesmerising parade of beancurd production.

Caizhai has always been known as a centre of tofu. But, before this facility was built in 2018, families would produce small batches in their home workshops. They struggled to make ends meet, as the conditions didn’t meet the food safety standards for the tofu to be sold in supermarkets, while the younger generation saw little incentive to stick around in the countryside and join ailing family businesses.

Now, however, with a newly formed village co-operative running this purpose-built factory, they are processing 100kg of soybeans a day, supplying nearby schools and workers’ canteens, and selling the improved product – for almost double the previous price – to retailers in the cities. Around 30 younger villagers, who had been lured away by metropolitan life, have returned to Caizhai to join the production team, and visitors have increased 20-fold. They are drawn by an increasingly widespread nostalgia for the countryside, to see traditional tofu-making in action and get a taste of village life, creating demand for further cafes, guesthouses and related businesses nearby. 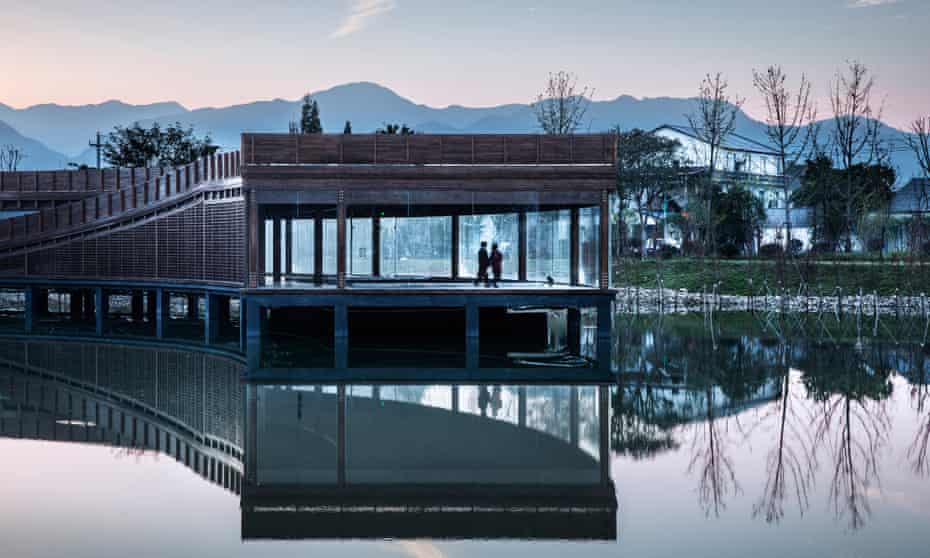 “We think of it as a kind of architectural acupuncture strategy,” says Xu Tiantian, the Beijing-based founder of DnA, the architecture practice behind the tofu factory and several other such projects across rural Songyang county in China’s eastern Zhejiang province. “In each case, we have tried to make something that restores the villagers’ pride in their local identity, as well as bringing in visitors and creating a local economic network.”

Over the last seven years, she has been working with county leaders to build an impressive constellation of new facilities around the region, from a brown sugar factory and a camellia oil workshop, to a rice wine distillery and pottery production plant, along with community centres and museums. The projects have now been brought together in a handsome new book, which reads like the work of several practices over several decades, such is the dizzying speed of change in China.

From a ring of bamboo trees tied together and pulled inwards to create an outdoor domed theatre, to a cave-like museum of Hakka culture made from rugged stone walls, the elegant collection of structures are all finely tuned to their setting. The projects mostly use simple local materials and traditional building techniques, updated to create a contemporary vernacular – oozing a seductive rustic chic that helps to attract a growing crowd of cultured urbanites in search of a rural restorative. But it was an uphill struggle at first. 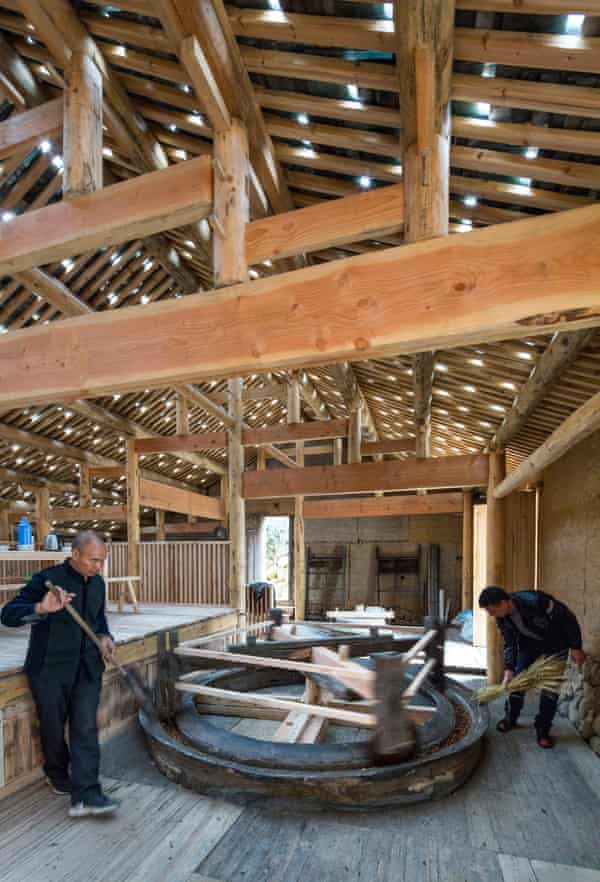 “It was difficult to persuade some villagers about the value of using traditional methods, particularly in the more remote areas,” says Xu. “Everyone wanted something modern and fancy, like they had seen in the big cities. Nobody believed in the old rammed-earth houses or bamboo structures any more.”

Gradually, she convinced them that careful repair and low-key intervention was better than bulldozing and then importing the ersatz glitz of the city. One of her first projects was restoring a cluster of rammed-earth houses in Pingtain village, which had been abandoned for decades, converting them into a community centre, with an indigo dye workshop and an exhibition space for agricultural equipment.

On seeing the results, previously sceptical villagers were inspired to renovate their own buildings in a similar way, some setting up home-stay businesses. Xu’s restoration of an old stone bridge between two villages included the installation of a simple wooden canopy and a grove of trees planted in the middle, transforming the route into a new social space for markets and events. For a new rice wine distillery in Shantou village, she built an enigmatic complex of black concrete vaults and perforated brick walls, echoing the form of historic wine cellars, once again arranged with a visitor route weaving between the production spaces. A forthcoming pottery factory will produce bottles for the wine, as well as packaging for the region’s other products, helping to build a self-sustaining, co-operatively owned, rural economy across the county.

“Songyang is an exemplar of what has become quite a widespread phenomenon,” says Shanghai-based design critic Aric Chen, currently researching a book about modern rural architecture in China. “The last decade has seen a huge number of projects focused on eco-tourism and agri-tourism. It used to be about building boutique hotels, but the strategies have become much more sophisticated.”

The state-led “preservation” of historic villages often used to entail wholesale demolition and reconstruction. Villagers were displaced, and their homes were transformed into restaurants and hotels to cater for coach-loads of domestic tourists, bussed in from the big cities for a glimpse of “the past”. Unesco-listed towns and villages became Disneyfied cadavers of their former selves, their earthen walls “upgraded” with concrete and steel.

The Songyang approach is much more subtle. The interventions stem from specific local industries in each village, and the projects are led by local unions, with funding coming from provincial and county-level subsidies, as well as the villagers themselves. Xu’s strategic acupuncture acts as a catalyst for communities to build a future on their own terms, while also helping to close the yawning rural-urban divide. “We’re trying to provide a bridge between the villages and the city,” says Xu. “Since we began, over 600 people have returned to Songyang to start new businesses, bringing their knowledge from the cities.”

The fate of the Chinese countryside has been under the spotlight in recent years, ever since president Xi Jinping declared the new national priority of “comprehensive rural revitalisation”. The past two decades of frantic city-building have led to “rural hollowing”, with almost 200 villages wiped off the map each day since 2000. Grandparents and babies were left behind by working-age adults flocking to the cities. The focus is now on creating incentives for a return. Ever keen to follow in Chairman Mao’s footsteps, Xi has also urged everyone – from teachers to artists and film-makers – to live among the rural masses, in order to “form a correct view”. Meanwhile, the Communist Youth League has promised to dispatch more than 10 million students to the countryside by 2022, to “spread civilisation”. 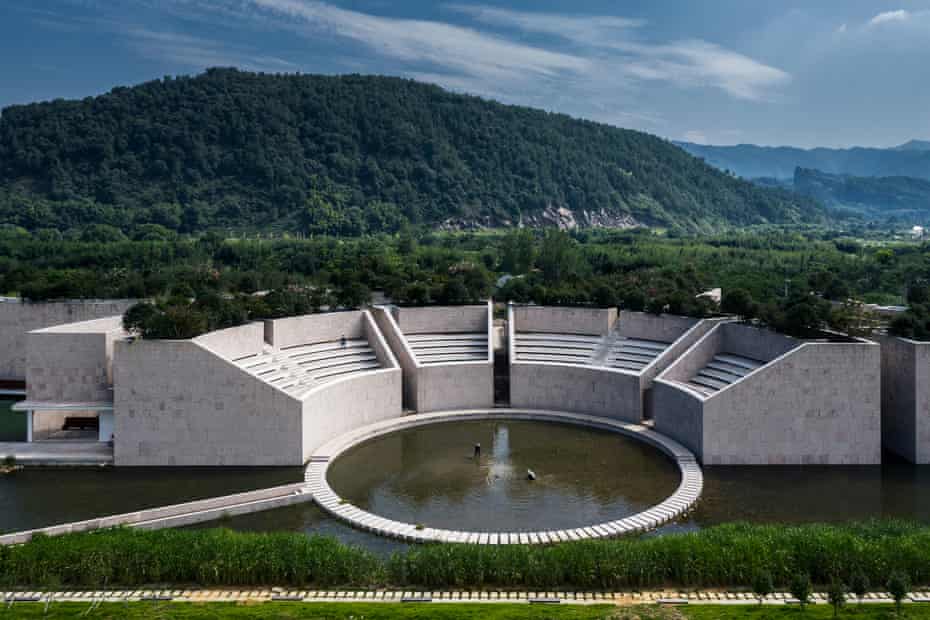 In parallel with state-sponsored initiatives, there has been a growing romantic longing for the rural homeland – known as xiangchou – among city-dwellers facing the pressures of urban life, with rising pollution and food safety concerns. Young tourists generally now prefer rustic retreats to the big resorts, while livestreaming from pastoral idylls has become a big business. Li Ziqi, a 30-year-old influencer from Sichuan province, has made millions from her personal food brand, promoted with videos of her foraging for wild herbs and pursuing traditional crafts, such as woodworking and natural dyeing. Her YouTube channel that has racked up more than 2bn views and she’s not alone. Since mid-2019, more than 100,000 livestreamers have tuned in from rural farms to shift goods on Alibaba, the giant online marketplace.

It is a form of cottagecore that has intoxicated the architecture world, too, with younger practices increasingly keen to ditch the city for the fields. “It’s a matter of opportunity,” says Chen. “A lot of resources are being channelled into the countryside, and the smaller scale of projects make them easier for younger designers to get.” But, deeper than that, he thinks it aligns with longstanding questions about what contemporary Chinese architecture is, in a context where there were no private practices until the 1990s.

“After an era of foreign architects using China as their playground,” he says, “we’re seeing a new generation of Chinese architects defining their own approach – often using vernacular techniques in a new way – and inspired by the processional principles of traditional Chinese garden design and landscape painting, creating a ‘social picturesque’.”

With a large public housing project and a silk-farming workshop under way, the Songyang effect is keeping Xu and her team in hot demand. “We’ve received proposals from all over China,” she says. “We’re now working on a lotus tea factory in Guizhou and another rice wine factory in Shaanxi.” With around 940,000 villages across the country, there’s going to be plenty to keep architects occupied for a while yet.

The Songyang Story is published by Park Books. Xu Tiantian is giving a talk at RIBA on 11 May as part of its Architecture Anew series. Details here.