Source: The Guardian (3/9/21)
China’s appetite for meat fades as vegan revolution takes hold
Concerns over carbon emissions and food crises are fuelling a move away from meat consumption as a symbol of wealth
By Crystal Reid 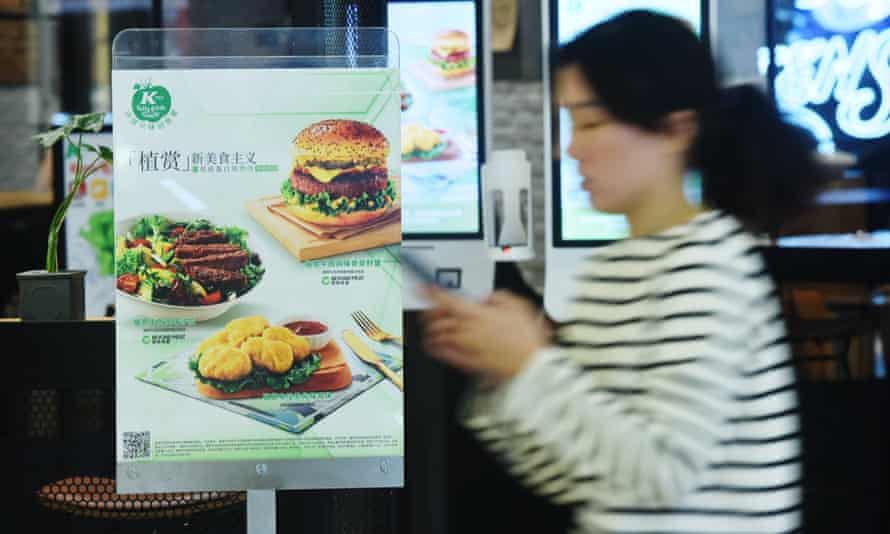 An advertisement for plant-based products at a KFC store in Hangzhou. International and domestic chains are expanding their range of meat alternatives. Photograph: VCG/Getty Images

The window of a KFC in the eastern Chinese city of Hangzhou hosts the image of a familiar mound of golden nuggets. But this overflowing bucket sporting Colonel Sanders’ smiling face is slightly different. The bucket is green and the nuggets within it are completely meat free.

Over the last couple of years, after many years of rising meat consumption by China’s expanding middle classes for whom eating pork every day was a luxurious sign of new financial comforts, the green shoots of a vegan meat revolution have begun to sprout. Although China still consumes 28% of the world’s meat, including half of all pork, and boasts a meat market valued at $86bn (£62bn), plant-based meat substitutes are slowing carving out a place for themselves among a new generation of consumers increasingly alarmed by food crises such as coronavirus and African swine fever.

China’s most cosmopolitan cities are now home to social media groups, websites and communities dedicated to meat-free lifestyles. VegeRadar, for example, has compiled comprehensive maps of vegetarian and vegan restaurants all across China. According to a report by the Good Food Institute, China’s plant-based meat market was estimated at 6.1bn yuan (£675m) in 2018 and projected to grow between 20 and 25% annually.

Yun Fanwei, a 25-year-old student from Shanghai, is one of a new breed of vegetarians hungry for more options. “I buy some of these fake meat products and a lot of them are pretty good. They don’t necessarily taste like meat, but it makes a nice change from tofu,” she said.

Eating meat has been closely connected with the growing affluence of China. In the 1960s, the average Chinese person consumed 5kg of meat a year. This had shot up to 20kg by the time of former leader Deng Xiaoping’s “reform and opening” of the late 1970s, and to 48kg by 2015. 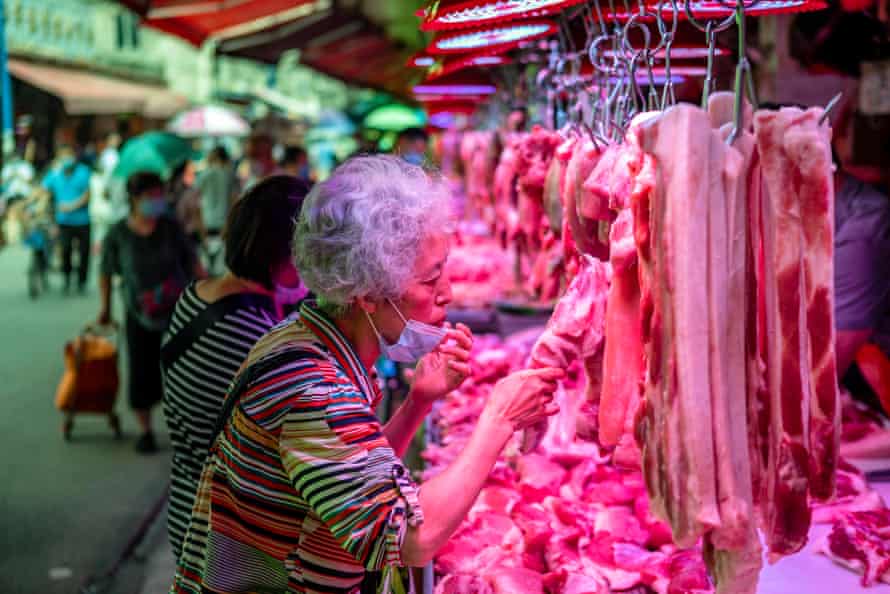 A woman smells meat before buying it at Xihua farmer’s market in Guangzhou, Guangdong province, China. After the coronavirus outbreak China brought in new regulations on the trade and consumption of wild animals. Photograph: Alex Plavevski/EPA

But in 2016, as part of its pledge to bring down carbon emissions, the Chinese government outlined a plan to cut the country’s meat intake by 50%. It was a radical move, and so far very few other governments around the world have included meat consumption in their carbon-reduction plans.

The new guidelines, which called on citizens to consume just 40-75g of meat a day, were promoted with a series of public information adverts featuring the actor Arnold Schwarzenegger and director James Cameron. Since then there have been few other concrete steps taken, other than the president, Xi Jinping, last August launching a “clean plate campaign” aimed at reducing the “shocking and distressing” 40% of food that goes straight from Chinese dinner tables into the bin. Some commentators speculated that asking Chinese citizens to reduce their meat consumption was felt to be particularly unpopular.

But alternative proteins are seen as a possible route forwards. Last year at the annual “two sessions” parliament, Sun Baoguo, a member of the Chinese People’s Political Consultative Conference, called for more investment in and regulation and promotion of artificial meat.

Some of the biggest international chains operating in China have been quick to bet on the growth of alternative meats. KFC is now selling vegan chicken nuggets, Burger King is offering an Impossible Whopper, and Starbucks is serving Beyond Meat pastas, salads and wraps.

But domestic companies are setting up shop too, betting that state backing will come soon, not least because the government may see alternative proteins as a way to let citizens continue to have the “luxury” of meat while also moving towards its carbon-reduction goals. That optimism has led to several Chinese competitors entering the market alongside international powerhouses such as Cargill, Unilever and Nestlé, as well as the vegan meat poster-children Impossible and Beyond. 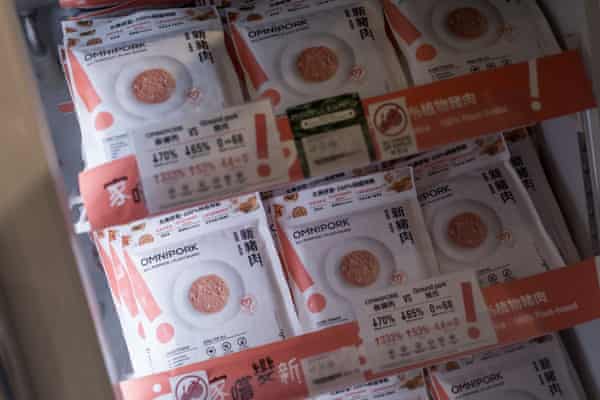 OmniFoods, which launched in Hong Kong in 2018, is one of a band of regional startups jostling for market share, having recently opened a multi-brand vegan shop and restaurant in Shanghai and secured its signature product, OmniPork, in McDonald’s in Hong Kong and Aldi, White Castle and Starbucks on the mainland. The company, which plans to operate in 13 countries this year, also just completed its UK soft launch for Veganuary, during which OmniPork was turned into everything from scotch eggs to Korean bibimbap at participating restaurants.

The OmniFoods founder, David Yeung, hopes the opening of a China-based factory next year will help bring down the price of his products. Plant-based proteins currently cost much more than their meat counterparts, a major barrier when it comes to getting China’s notoriously thrifty shoppers to make the switch. “Obviously minimising logistics and middle parties and creating economies of scale will have a big impact on the value chain. As we cut these expenses in China, we foresee a significant price drop,” Yeung said.

Shanghai-based Z-Rou produces a plant-based mince substitute which is already in the canteens of some of China’s top international schools, hospitals and businesses. Its CEO, Franklin Yao, is targeting opinion leaders and middle-class consumers who can afford to make conscious choices. “They would even be willing to pay more as they know they’re getting a healthier product that’s helping ensure the future of the planet their children are inheriting. That’s priceless.” 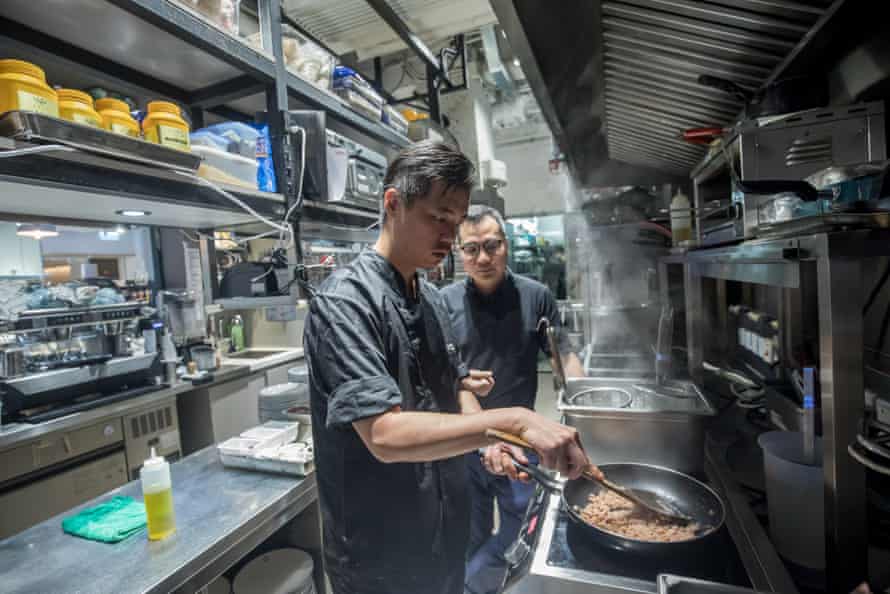 Other China players include Zhenmeat, which makes plant-based beef, pork and crayfish, and Starfield, whose seaweed-based mince alternative has been turned into dishes at some of China’s leading restaurant chains.

Yao admits the industry is still very small in China but he thinks meat-free substitutes will become mainstream very soon. “Chinese consumers are actively looking for more sustainable products. While the link between meat and the environment is still weak among the majority of the population, the interest is there and China learns fast.”

But weaning people off meat may prove harder than some of these companies would like to think. “I’ve tried a vegetarian braised pork dish before but it’s not the same as real meat,” said 64-year-old retiree Bao Gege. “The taste, texture and nutritional values are not comparable. I wouldn’t try it again, even if it was cheaper than meat.”