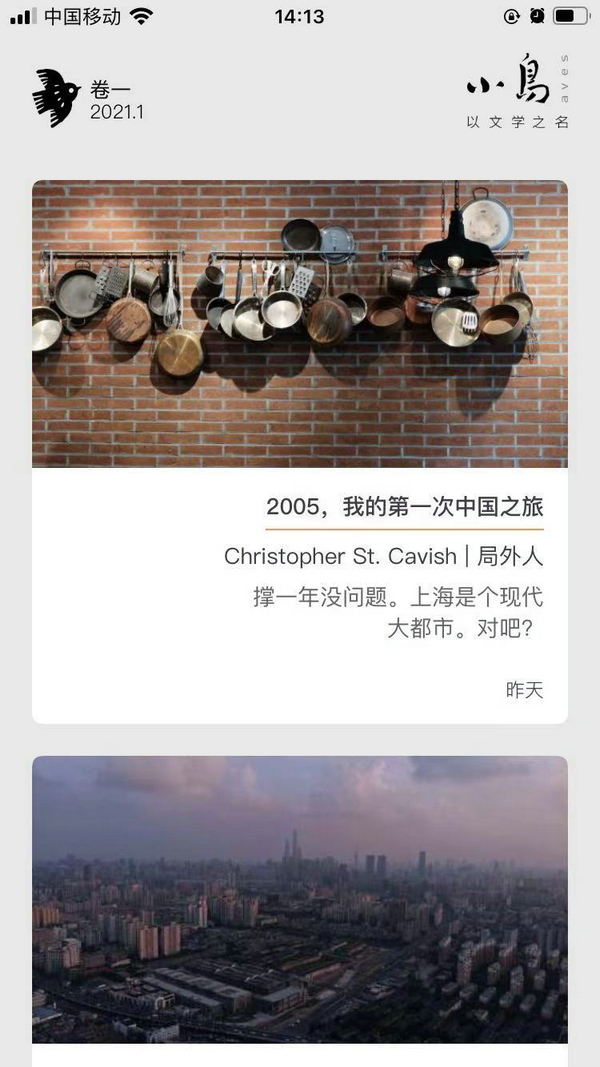 A screenshot of the Xiao Niao Aves app, which was launched in December under the slogan “in the name of literature”, displays the basic information of one of the available articles. CHINA DAILY

As digital reading and social media in China become more dominant in daily life, fewer people are reading books. This trend has been worsened by the COVID-19 pandemic. Retail book sales dropped by 5.08 percent in 2020, the first fall in two decades. Moreover, at the start of this year, at least 17 newspapers around the country announced their demise.

At such a time, the launch of a literature app Xiao Niao (“little bird”) Aves seems both timely and risky. The design is simple and neat. Its logo is a flying bird in paper-cutting style, with the slogan “in the name of literature”.

The articles are divided into five categories－fiction, nonfiction, archive, column and poetry. Each article is presented with a picture, and basic information; title, author’s name, the section it belongs to, a short sentence that provides a glimpse into the article and the publishing date, one article following another. Users can roll directly down to see them all.

There are also different sections run by different editors or writers, such as Story Archipelago that carries the latest Western short stories edited by Peng Lun, Novelists that publish fictional works edited by Li Jingrui, and Going to the Best University That I Know, a series of essays created by journalist and writer Yang Xiao.

One can read a part of the articles but will have to pay 12 yuan ($1.85) each to read the first three pieces. The price for access to a whole year’s articles is 588 yuan, which many consider quite expensive. Comparatively, classic literary magazines are much cheaper. China’s top literature bimonthly Harvest charges 180 yuan for a year’s subscription, and now is offering 50 percent discount on online shopping platforms.

However, Yang Ying, Xiao Niao Aves’ editor-in-chief, says subscription levels during the first month after the app was launched in December are better than expected.

“I actually don’t know whether we have a promising future, but the reader base of simplified Chinese language is large enough, so even if one out of 10,000 readers is willing to pay for serious literature, the outlook for us is optimistic,” she says.

The introduction to Xiao Niao Aves states that the aim of this app is to “introduce good writers to good readers”.

There are universal standards about “good writers”, just like what has been discussed in the essays by Italian writer Italo Calvino or American literary critic George Steiner, Yang says.

“Good writers should be able to stand the test of time. In the internet age, seemingly every one can write online. Because publishing has become so easy, it is not as valued as it once was. Especially in the time of multimedia. If we still want to emphasize the power of literature, we must think about whether literature has adapted itself to such a change, and how we can attract new readers with new value,” she says.

“In terms of imagination or narration, among other perspectives, should literature follow the old styles, or we can find new methods to attract readers’ attention back to text, which is a question that we can explore. As a result, ‘good writers’ or ‘good readers’ refer to people who are interested in such an exploration,” Yang says.

“It’s not only something that you can read on to kill time, or you can’t even talk about with your relatives during Spring Festival, but something that can reflect the reality, including the past, the present and the future,” she says.

“If we can do it well, readers will realize that Xiao Niao Aves has mirrored the world broadly.”