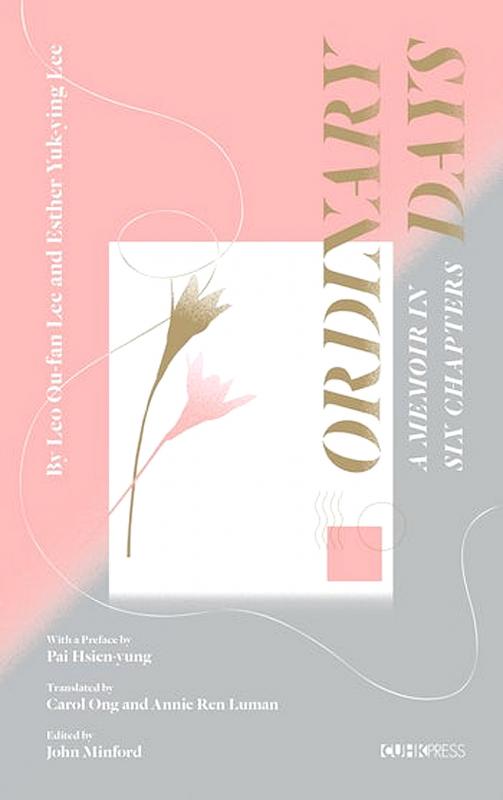 Leo Ou-fan Lee (李歐梵) is a professor emeritus at Hong Kong’s Chinese University, and Ordinary Days: A Memoir in Six Chapters is a record of his second, and current, marriage, written in conjunction with his wife Esther Yuk-ying Lee (李玉瑩). Both had been married before, and Leo was almost 60 when he finally married Esther in 2000.

The spirit of Taiwan is everywhere in this book. It’s essentially a series of reminiscences about their marriage by the two authors, but Leo, though born in China, studied at the National Taiwan University (NTU). His father lived in Taiwan and Leo returned to Taipei (one of many return visits) for his father’s funeral.

The book consciously echoes the 18th century memoir, Shen Fu’s (沈復) Six Records of a Floating Life (浮生六記, of which only 4 chapters survive). Another influence is Eileen Chang (張愛玲). Her famous tale Love in a Fallen City (傾城之戀) is re-used in this book as the title of Chapter 4.

And then there is a preface by Kenneth Pai (白先勇), one of Taiwan’s most celebrated writers and the author of Taipei People (1971) and Crystal Boys (1983). Here Pai recalls his time at NTU, which he entered in 1957 to study English literature in the Foreign Literature department. Every time Leo returns to Taiwan he meets Pai and they walk through the streets (of Ximending, for instance) noting how much has changed. Leo considered, and still considers, Taipei to be “such a cultured city,” as impressive for its food as for the availability of classical CDs and DVDs.

Pai observed that the Tianyuan Farmhouse Cafe used to be the crucial meeting place for NTU literary graduates who would gather there and talk about Jean-Paul Sartre, Albert Camus and Existentialism. Among these alumni were Wai-lim Yip (葉維廉), translator of T.S. Eliot’s The Waste Land, and the experimental novelist Wang Wen-hsing (王文興).

This book is translated by Carol Ong and Annie Ren. Carol Ong was born in Taiwan.

The book’s editor is the New Zealander John Minford who relates in an introduction that, in a 2018 conference in New Zealand entitled Dreaming of the Manchus, one of the participants was “one of Taiwan’s leading collectors and art connoisseurs.” Taiwan appears specifically in Chapter 5, The Joys of Travel, which is about Shanghai, Taipei and Singapore.

Here, in contrast to cultural Taipei, Leo values Singapore for its colonial ambiance, such as the Raffles Hotel where Joseph Conrad, Somerset Maugham and Graham Greene used to stay. As for Shanghai, he considers the city in the 1930s to be a legend, with its modern incarnation by contrast relatively disappointing. Pai told him it was like a former beauty, a middle-aged woman who had gone down in the world.

Leo’s PhD was on the May the Fourth writers, in particular Xu Zhimo (徐志摩), though his ideal as a writer remains Oscar Wilde, especially his autobiographical De Profundis. In Chapter 3 of this new book he quotes from a long “letter” he wrote to his late father (who was a Catholic; Leo is agnostic) in heaven, mostly concerning his failed first marriage. He hadn’t had the courage to tell his father, who died in 1995, about this in real life.

Leo has previously written a novel, The Confessions of Fan Liuyuan, where, he says, he had a first try at describing his amorous feelings via a fictitious character. By contrast, Esther had never written anything for publication before. Leo finished the novel in Taiwan where the editor of the literary supplement of the United Daily News told him that if it was of novel length he would run it as a serial. This is what happened, and the novel was eventually published in Taiwan in 1998.

Chapter 4 of this new book is about Hong Kong. It opens with a quotation from Mahler — Richard Strauss and Mahler had always been Leo’s favorite composers. Esther preferred Cantonese opera.

The chapter begins in 1970 when Leo first saw the city. Many of his friends there had become Marxists, following the pro-Cultural Revolution riots there three years earlier, but Leo, coming from the US, found himself more of an internationalist. The more Hong Kong became Westernized, he writes, the more he liked it.

His thoughts became even more complex at the handover of Hong Kong to China in 1997. Hong Kong was promised it would be allowed to follow its own path, half Eastern, half Western. In addition, Leo was beginning to see his way to his second marriage. Esther was born in Canton, but also felt that in her heart she was a Hong Konger.

The final chapter is about Esther’s experience with depression, including three suicide attempts. This chapter, including Esther’s Depression Diary, would be very useful for anyone suffering from this distressing condition. Importantly, it contains a list of anti-depression activities. Leo, by contrast, was diabetic.

In 2001 they flew from the US, where they had both been working, back to Hong Kong, stopping over in Taipei where they consulted a qigong master who remains un-named. His main advice was that they should both eat more.

With its mixture of literary references from different cultures and personal reminiscence, plus the different writing styles of its two authors, this is a fascinating book. Interested readers can find out more about it, or buy it, by going, not to amazon.com, but to amazon.co.uk.