Last month, CMP reported on the firestorm surrounding well-known blogger and amateur scientist Zhao Shengye (赵盛烨), who in a post to his more than three million social media followers appeared to advocate a Chinese policy of earth-wide destruction should the Trump administration be “bent on fighting against China.” Posts expressing extreme nationalism on Chinese social media are often afforded great latitude from censors, but Zhao’s violent advocacy of global destruction to spite the US was too much for many Chinese, and after Zhao was widely criticized the post was finally taken down.

In a rare case of public backlash having consequences for extreme nationalist views online, the China Computer Federation (CCF) issued a notice on September 24 saying it had revoked Zhao Shengye’s membership in the organization after his “extreme comments” on his official WeChat account had had a “huge negative impact” on the organization. The CCF said in its notice that it had received numerous official complaints from other members. 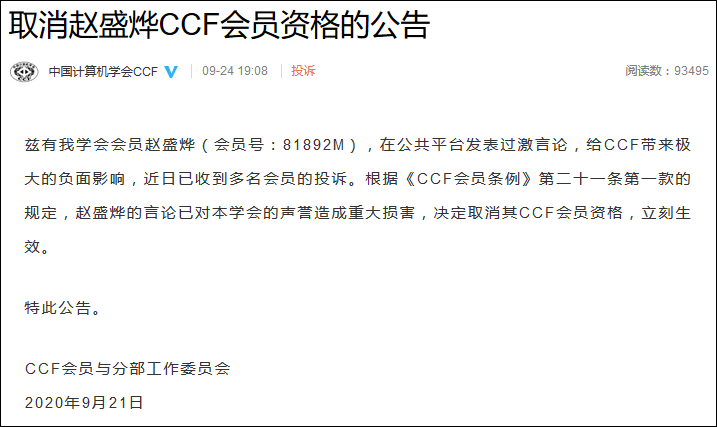 According to Article 21 of the CCF Constitution, which was cited as justifying revocation of Zhao’s membership status, members can be disciplined for “words and deeds violating the constitution of the federation or other regulations and causing significant damage to the interests or reputation of the federation.”

Calling itself the “leading organization on computing technology and applications in China,” the CCF currently claims a paid professional membership of more than 55,000 nationwide. The federation receives no government funding and is nominally independent. Its umbrella organization, however, is the China Association for Science and Technology, a so-called “mass organization” (人民团体) under the leadership of the CCP’s United Front Work Department (UFWD).

The CCF was originally founded in 1962 as the “Computer Expert Committee of the Chinese Institute of Electronics” (中国电子学会计算机专业委员会), but the committee was forced to cease its activities at the outset of the Cultural Revolution in 1966. Related activities were restarted in January 1979, following the start of the reform and opening policy, and the group was renamed the “Computer Federation of the Chinese Institute of Electronics.” Finally, in March 1985, the group’s re-constitution as the China Computer Federation was approved by the China Association for Science and Technology.