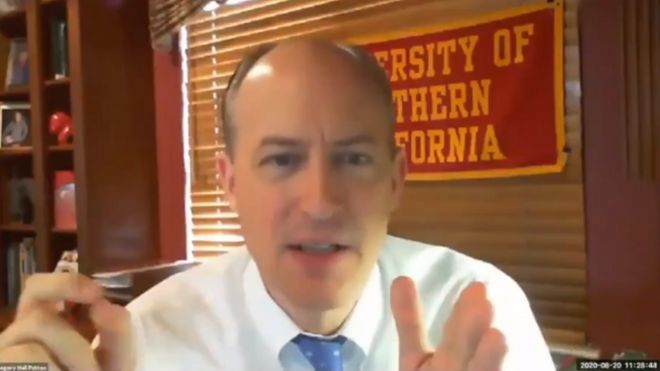 A US university investigation into one of its professors has ignited a debate over the use of a seemingly innocuous Chinese word.

Professor Greg Patton at the University of Southern California (USC) was telling students in a communications lecture last month about filler, or pause words, such as ‘err’, ‘umm’ or ‘you know’ in English.

Footage of his lecture, which has now gone viral, shows Prof Patton saying: “In China, the common pause word is ‘that, that, that’. So in China, it might be na-ge, na-ge, na-ge.”

Enunciated, na-ge sounds like the N-word, which led several of the professor’s students to complain to the university. Responding to the complaint, the dean of the university, Geoffrey Garrett, told students that Prof Patton would no longer be teaching the course.

“It is simply unacceptable for the faculty to use words in class that can marginalize, hurt and harm the psychological safety of our students,” he said.

The university says that Prof Patton “volunteered to step away” from his role amid the investigation into complaints made against him.

News of the spat reached China, where many posted on social media saying they thought his punishment discriminated against speakers of the Chinese language.

In Chinese the word “na-ge” (那个) is a common filler phrase that people use when they’re hesitating or trying to find the right word. It literally translates to the word “that”.

But there have been many documented incidents of the word being used innocuously and leading to misunderstandings, and even violence.

In July 2016, a fight broke out on the subway in the city of Southern Guangzhou, after a black man heard a Chinese man saying na-ge and mistook it for the N-word.

More recently, in April this year, Taiwanese news website UDN reported that two men nearly came to blows on the island outside a restaurant over the same misunderstanding.

Even Chinese basketball star Yao Ming has spoken of how the word brought him “some trouble” while playing in the US for the National Basketball Association (NBA).

CC Chen, a student at the USC, defended Prof Patton, arguing that it was “clearly an academic lecture on communication” and the professor was “describing a universal mistake commonly made in communication”.

“For him to be censored simply because a Chinese word sounds like an English pejorative term is a mistake and is not appropriate, especially given the educational setting,” she said. “It also dismisses the fact that Chinese is a real language and has its own pronunciations that have no relation to English.”

More than 11,000 people have now signed a Change.org petition calling for Prof Patton to be re-instated. And in China there are discussions taking place over whether the university acted too abruptly.

On the popular Sina Weibo microblog, more than 1,000 posts have used the hashtag  #USProfessorSuspendedForUsingNaGe, with many viewing the move as a suppression of Chinese speech.

One post called the incident a “contemporary version of the literary inquisition” – referring to the persecution of intellectuals during China’s imperial era.

“Is it now forbidden to speak Chinese in the United States?” asked one Sina Weibo user.

In recent months, many in China have expressed solidarity with the Black Lives Matter movement in the US. President Trump has been accused of stoking racist sentiment towards China over the Covid-19 pandemic by referring to the coronavirus as the “China virus”, “Wuhan virus”, and even “Kung Flu”.

His language has been regularly cited by Chinese media as an example of xenophobic attitudes towards the Chinese people. 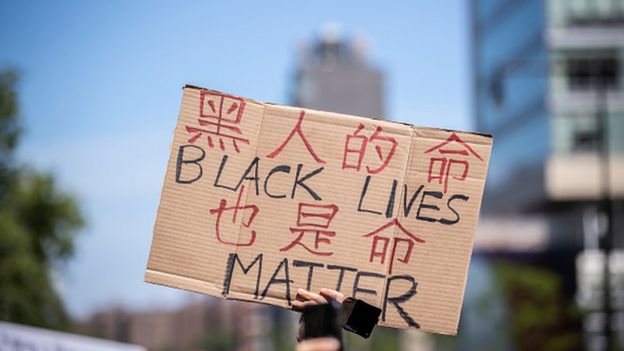 Some Chinese posters on Sina Weibo argued that USC, in suspending Prof Patton, had chosen “political correctness” over genuine change. Others raised a note of optimism that the story would raise awareness of differences rather than marginalise them.

Many were of the view that shared discrimination in recent months meant that Asian and black communities should work to understand each other rather than fight against one another.

“There should be respect for differences,” wrote one Weibo user.

Back in the US, USC staff and students reacted to the decision to suspend Prof Patton.

“There’s no language superior to the other,” Chengyan Wu, Co-President of USC Chinese Student and Scholar Association, told the university’s student news organisation.

“Restating the rights of one minority group should not be at the expense of violating the other,” he said. “We have the right to use our own language.”