Source: NYT (8/31/20)
Curbs on Mongolian Language Teaching Prompt Large Protests in China
阅读简体中文版| 閱讀繁體中文版
“Mongolian is our mother language,” the students shouted. Rights activists say the demonstrations are the biggest in the northern region since 2011.
By Amy Qin 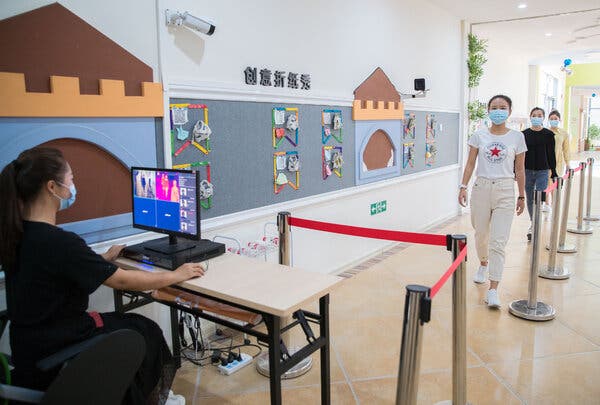 Checking temperatures at a school in Inner Mongolia, an autonomous region in northern China where Beijing is seeking to reduce the teaching of Mongolian in favor of Chinese. Credit…Costfoto/Barcroft Media, via Getty Images

Thousands of ethnic Mongolians in northern China have gathered outside schools to protest a new policy that would reduce the teaching of their language in favor of Chinese, according to rights groups, a rare display of mass discontent in the border region.

The demonstrations, which began late last week, are focused on an education policy announced this summer, which calls for Chinese to gradually replace Mongolian as the language of instruction in three subjects in elementary and middle schools around the Inner Mongolia region.

For many ethnic Mongolians, who see their language as one of the last surviving markers of their distinct cultural identity, the policy was a step too far.

“We Mongolians are a great race as well,” Dagula, a 39-year-old mother of two, said in a telephone interview from her home in Xilinhot, a city in Inner Mongolia. “If we accept teaching in Chinese, our Mongolian language will really die out.”

Images of the protests shared on social media sites showed crowds of parents and students amassing peacefully outside schools, singing and shouting slogans as the authorities looked on. In one video, a woman was shown flipping through the pages of a textbook, decrying the absence of Mongolian language. In another, students in blue and white uniforms shouted, “Mongolian is our mother language! We are Mongolian until death!” Photographs of petitions filled with signatures and studded with red fingerprints also ricocheted around the internet. By Monday afternoon, many of the posts had disappeared from Chinese social media sites, presumably scrubbed by online censors.

Under the new policy, classes would also rely on Chinese textbooks compiled and approved by the government, part of a broader government effort in recent years to standardize curriculum in schools. While the new policy states that the Mongolian language would still be taught to students, the role of Mongolian as a language of instruction would effectively be diminished in many schools.

The Inner Mongolia regional education bureau sought on Monday morning to reassure parents by issuing a statement vowing to limit the changes to only the three subjects: language and literature, politics, and history. In all other subjects, the bureau said, the textbooks, medium of instruction and hours devoted to teaching Mongolian and Korean, another minority language in the region, would remain unchanged.

“The existing bilingual education system has not changed,” the bureau said.

Still, Dagula, who like many Mongolians goes by only one name, said Monday afternoon that she would join other parents who planned to protest the policy by not sending their children to school when it reopens this week. She said that she had come to this decision despite exhortations from the local authorities, who recently called and knocked on doors to urge parents to send their children back to school. 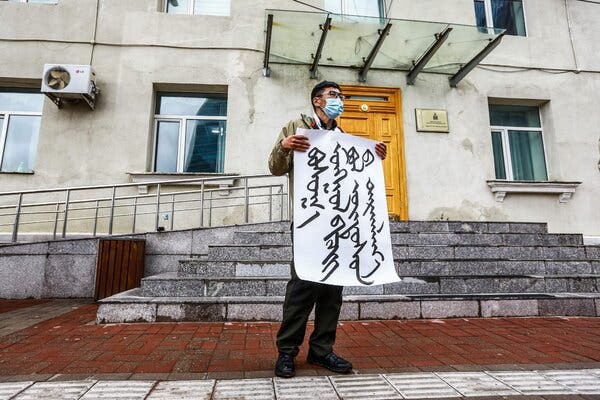 “When you turn on the television, it’s all Chinese — even the cartoons are in Chinese,” she said. “We don’t need to worry about our children not learning Chinese.”

For decades, China’s ruling Communist Party maintained policies intended to keep ethnic minorities, especially Tibetans and Uighurs, under political control while giving them a degree of autonomy to preserve their own languages and cultures.

But since Xi Jinping became the Communist Party leader in 2012, the party has increased its efforts to assimilate many ethnic minorities into the culture of the ethnic Han, who make up more than 91 percent of the country’s population.

The authorities say such policies help ethnic minorities by making it easier for them to integrate into the Han mainstream. Some ethnic minority parents have welcomed Chinese language instruction, believing it would better equip their children to compete for coveted spots at Chinese universities and jobs in the Chinese economy.

But the new policies have also stirred anxiety and fears, with some arguing that the measures will quickly erase their own native cultures and identities.

Activists say that the recent demonstrations are the largest in Inner Mongolia since 2011, when the killings of two ethnic Mongolians by Han drivers sparked protests across the vast borderland.

“Our way of life has already been wiped out,” said Enghebatu Togochog, director of the Southern Mongolian Human Rights Information Center, an exile group based in New York. “So what is left is just Mongolian language — it is the only symbol left of Mongolian identity. That’s why Mongolians are rising up and protesting these policies.”

Mr. Togochog said several protesters were beaten up and taken away by the authorities.

Resisting government policies on education and language — areas the authorities consider politically sensitive — can be risky. In 2018, Tashi Wangchuk, a Tibetan businessman who campaigned to preserve his native language, was sentenced to five years in prison after a contentious prosecution based on interviews that he gave to The New York Times.

The party has also pushed a greater emphasis on the Chinese language in the predominantly Muslim region of Xinjiang, in far western China. Education has been just one part of a sweeping crackdown in the region in recent years, in which as many as one million ethnic Uighurs and members of other Muslim minorities have been detained in internment camps. Across schools in Xinjiang, Chinese is replacing Uighur, a Turkic language, as the main language of instruction. Most elementary and middle school students are now taught in Chinese, up from 38 percent three years ago. 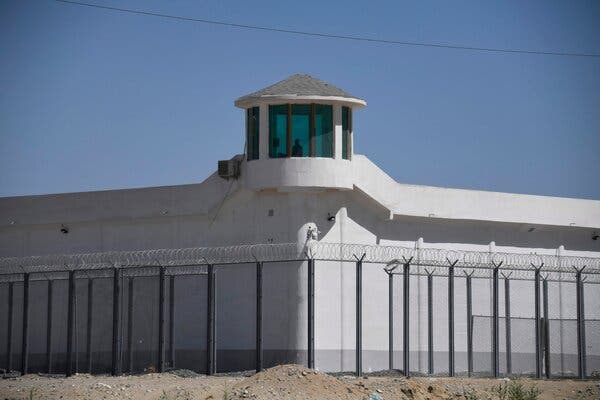 A watchtower on a facility near what is believed to be a re-education camp for Muslim minorities outside Hotan, Xinjiang. Credit…Greg Baker/Agence France-Presse — Getty Images

Inner Mongolia has experienced less of the violent ethnic strife that has convulsed Xinjiang and Tibet in the past decade or so. The region, which borders the independent nation of Mongolia and is twice the size of California, was seen to have been largely pacified over many decades of Han migration, intermarriage and repression.

Still, resentment of Chinese rule in the region has grown in recent years over the ecological damage wrought by a mining boom and economic growth that disproportionately benefited the Han, as well as the rapid dismantling of the Mongolian pastoral tradition.

Bateer, 44, a herdsman in the Xilingol Prefecture of Inner Mongolia, said in a telephone interview that he feared that, under the new education policy, future generations of Mongolians would forget their culture and their grasslands heritage. His daughter had already graduated from school, but he said he planned to continue protesting until the policy was reversed.

“This is about our entire ethnic group,” he said. “How could I not go?”