The Chinese academics’ “Carl Schmitt moment” discussed in this article is not the only parallel and similarity between Hitler’s 1930s Germany and today’s ultranationalist and imperialist China. For one thing, now as then, many who fled did so because they could see their own once-decent colleagues willingly duped by the Party. It’s fundamentally the same “seductive lure of authoritarianism” discussed in the same newspaper by Anne Applebaum–Magnus Fiskesjö, nf42@cornell.edu

Source: NYT (8/2/20)
‘Clean Up This Mess’: The Chinese Thinkers Behind Xi’s Hard Line
阅读简体中文版 | 閱讀繁體中文版
Chinese academics have been honing the Communist Party’s authoritarian response in Hong Kong, rejecting the liberal ideas of their youth.
By Chris Buckley 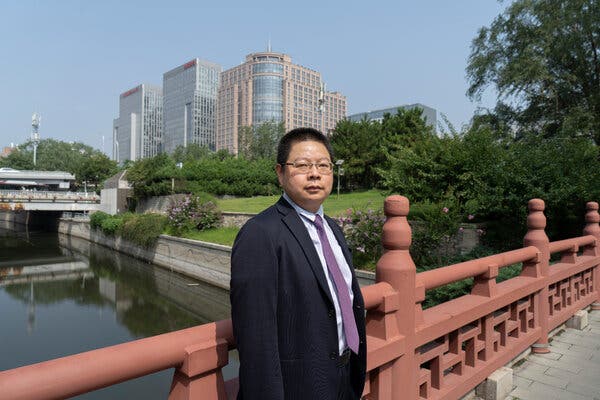 HONG KONG — When Tian Feilong first arrived in Hong Kong as demands for free elections were on the rise, he said he felt sympathetic toward a society that seemed to reflect the liberal political ideas he had studied as a graduate student in Beijing.

Then, as the calls escalated into protests across Hong Kong in 2014, he increasingly embraced Chinese warnings that freedom could go too far, threatening national unity. He became an ardent critic of the demonstrations, and six years later he is a staunch defender of the sweeping national security law that China has imposed on the former British colony.

Mr. Tian has joined a tide of Chinese scholars who have turned against Western-inspired ideas that once flowed in China’s universities, instead promoting the proudly authoritarian worldview ascendant under Xi Jinping, the Communist Party leader. This cadre of Chinese intellectuals serve as champions, even official advisers, defending and honing the party’s hardening policies, including the rollout of the security law in Hong Kong.

“Back when I was weak, I had to totally play by your rules. Now I’m strong and have confidence, so why can’t I lay down my own rules and values and ideas?” Mr. Tian, 37, said in an interview, explaining the prevailing outlook in China. Witnessing the tumult as a visiting scholar in Hong Kong in 2014, Mr. Tian said, he “rethought the relationship between individual freedom and state authority.”

“Hong Kong is, after all, China’s Hong Kong,” he said. “It’s up to the Communist Party to clean up this mess.”

While China’s Communist Party has long nurtured legions of academics to defend its agenda, these authoritarian thinkers stand out for their unabashed, often flashily erudite advocacy of one-party rule and assertive sovereignty, and their turn against the liberal ideas that many of them once embraced.

They portray themselves as fortifying China for an era of deepening ideological rivalry. They describe the United States as a dangerous, overreaching shambles, even more so in the wake of the coronavirus pandemic. They oppose constitutional fetters on Communist Party control, arguing that Western-inspired ideas of the rule of law are a dangerous mirage that could hobble the party.

They argue that China must reclaim its status as a world power, even as a new kind of benign empire displacing the United States. They extol Mr. Xi as a historic leader, guiding China through a momentous transformation.

A number of these scholars, sometimes called “statists,” have worked on policy toward Hong Kong, the sole territory under Chinese rule that has been a stubborn enclave for pro-democracy defiance of Beijing. Their proposals have fed into China’s increasingly uncompromising line, including the security law, which has swiftly curbed protests and political debate.

“We ignore these voices at our own risk,” said Timothy Cheek, a historian at the University of British Columbia who helps run Reading the China Dream, a website that translates works by Chinese thinkers. “They give voice to a stream of Chinese political thought that is probably more influential than liberal thought.”

As well as earnestly citing Mr. Xi’s speeches, these academics draw on ancient Chinese thinkers who counseled stern rulership, along with Western critics of liberal political traditions. Traditional Marxism is rarely cited; they are proponents of order, not revolution.

Many of them make respectful nods in their papers to Carl Schmitt, the German legal theorist who supplied rightist leaders in the 1930s and the emerging Nazi regime with arguments for extreme executive power in times of crisis, Ryan Mitchell, an assistant professor of law at the Chinese University of Hong Kong, documented in a recent paper.

“They’ve provided the reasoning and justification,” Fu Hualing, a professor of law at the University of Hong Kong, said of China’s new authoritarian scholars. “In a way, it’s the Carl Schmitt moment here.”

China’s ideological landscape was more varied a decade ago, when Mr. Tian was a graduate student at Peking University, a traditionally more liberal campus. Censorship was lighter, and universities tolerated guarded discussion of liberal ideas in classrooms.

Many scholars, including Mr. Tian’s dissertation adviser, Zhang Qianfan, argued that Hong Kong, with its robust judicial independence, could inspire similar steps in mainland China. “I had also been nurtured by liberal scholars.” Mr. Tian said.

Such ideas have gone into sharp retreat since Mr. Xi took power in 2012. He began a drive to discredit ideas like universal human rights, separation of powers and other liberal concepts.

Dissenting academics are maligned in the party-run news media and risk professional ruin. Xu Zhangrun, a law professor at Tsinghua University in Beijing, was detained in July and dismissed from his job after writing a stream of essays condemning the party’s direction under Mr. Xi. 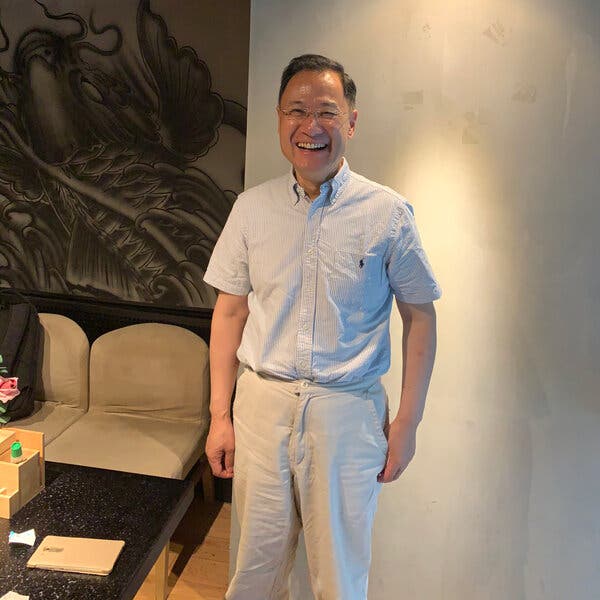 Xu Zhangrun, a law professor at Tsinghua University, was detained by the police in Beijing in July and lost his job. Credit…The New York Times

The education authorities generously fund pro-party scholars for topics such as how to introduce security laws in Hong Kong. Chinese and foreign foundations that once supported less orthodox Chinese scholars have retrenched because of tightening official restrictions.

More than fear and career rewards have driven this resurgence of authoritarian ideas in China. The global financial crisis of 2007, and the United States’ floundering response to the coronavirus pandemic, have reinforced Chinese views that liberal democracies are decaying, while China has prospered, defying predictions of the collapse of one-party rule.

“China is actually also following a path that the United States took, seizing opportunities, developing outward, creating a new world,” Mr. Tian said. “There is even a fervent hope that we’ll overtake the West in another 30 years.”

China’s authoritarian academics have proposed policies to assimilate ethnic minorities thoroughly. They have defended Mr. Xi’s abolition of a term limit on the presidency, opening the way for him to stay in power indefinitely. They have argued that Chinese-style “rule by law” is inseparable from rule by the Communist Party. And more recently they have served as intellectual warriors in Beijing’s efforts to subdue protest in Hong Kong.

“For them, law becomes a weapon, but it’s law that’s subordinated to politics,” said Sebastian Veg, a professor at the School of Advanced Studies in Social Sciences in Paris who has studied the rise of China’s statist thinkers. “We’ve seen that at work in China, and now it seems to me we’re seeing it come to Hong Kong.”

Under the legal framework that defined Hong Kong’s semi-autonomy after its return to China in 1997, many in the territory assumed that it would mostly manage its own affairs for decades. Many believed that Hong Kong lawmakers and leaders would be left to develop national security legislation, which was required by that framework.

But Mr. Xi’s government has pushed back, demanding greater influence. The authoritarian scholars, familiar with both Mr. Xi’s agenda and Hong Kong law, have distilled those demands into elaborate legal arguments.

Several Beijing law professors earlier served as advisers to the Chinese government’s office in Hong Kong, including Jiang Shigong and Chen Duanhong, both of Peking University. They declined to be interviewed. 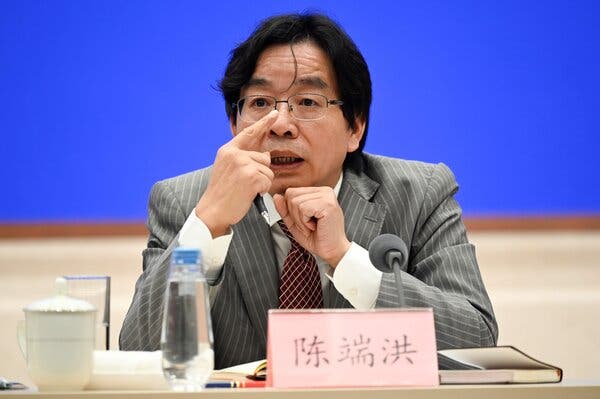 “The survival of the state comes first,” over individual rights, wrote Chen Duanhong, professor of law at Peking University, who served as an adviser to the Chinese government’s office in Hong Kong. Credit…Wang Zhao/Agence France-Presse — Getty Images

“I don’t think they’re necessarily setting the party line, but they’re helping to shape it, finding clever ways to put into words and laws what the party is trying to do,” said Mr. Mitchell, of the Chinese University of Hong Kong. “This is all happening through legislation, so their ideas matter.”

A Chinese government paper in 2014, which Professor Jiang is widely credited with helping write, asserted that Beijing had “comprehensive jurisdiction” over Hong Kong, dismissing the idea that China should stay hands off. The framework that defined Hong Kong’s status was written in the 1980s, when China was still weak and under the sway of foreign liberal ideas, he later said.

“They treat Hong Kong as if it were part of the West, and they treat the West as if it were the entire world.” Professor Jiang recently said of Hong Kong’s protesters. “China’s rise has not, as some imagined, drawn Hong Kong society to trust the central authorities.”

After protesters occupied Hong Kong streets in 2014, he and other scholars pressed the case that China had the power to impose national security legislation there, rejecting the idea that such legislation should be left in the hands of the reluctant Hong Kong authorities.

“The survival of the state comes first, and constitutional law must serve this fundamental objective,” Professor Chen, the Peking University academic, wrote in 2018, citing Mr. Schmitt, the authoritarian German jurist, to make the case for a security law in Hong Kong.

“When the state is in dire peril,” Professor Chen wrote, leaders could set aside the usual constitutional norms, “in particular provisions for civic rights, and take all necessary measures.”

Professor Chen submitted an internal study to the party’s policymakers on introducing security legislation for Hong Kong, according to a Peking University report in 2018, over a year before the party publicly announced plans for such a law.

Since China’s legislature passed the security law in late June, he, Mr. Tian and allied Chinese scholars have energetically defended it in dozens of articles, interviews and news conferences. Chinese intellectuals, Mr. Tian suggested, will next confront worsening relations with the United States.

“We have to choose what side we’re on, including us scholars, right?” he said. “Sorry, the goal now is not Westernization; it’s the great rejuvenation of the Chinese nation.”