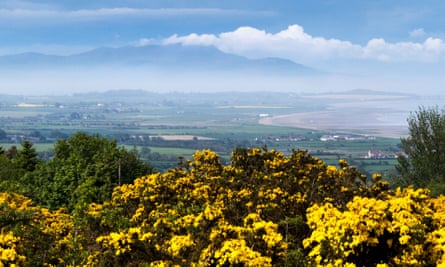 A Hong Kong property tycoon wants to build a city in Ireland to host 50,000 emigrants from the semi-autonomous city.

Ivan Ko, the founder of the Victoria Harbour Group (VHG), an international charter city investment company, hopes to find a 50 sq km site between Dublin and Belfast to create a new city, named Nextpolis, from scratch.

Ko has pitched the plan, which would include schools that teach in Cantonese, to Irish officials, arguing it would fit the government’s stated desire to develop regions outside the capital.

Of six locations under consideration the favourite is a site between Drogheda and Dundalk, near the border with Northern Ireland and within striking distance of Dublin airport.

“We like Ireland,” Ko told the Guardian on Tuesday. “Corporate taxes are very low. You have a very strong manufacturing and biomedical companies. Major tech giants have European headquarters there. Overall we think Ireland is very good.”

A department of foreign affairs spokesperson in Dublin confirmed there had been talks with Ko but appeared to pour cold water on the idea. “Following an initial approach in December 2019, the department had limited contact with the individuals involved to provide helpful and realistic guidance about Ireland. Since providing this guidance there has been no further action taken by the department in this matter,” they said.

He drastically scaled that down after feedback from Ireland and other potential hosts, he told the Guardian. “We found out that replicating the Hong Kong model was not suitable, as if we were imposing something, and that Hong Kong people would be seen as segregated from the rest of the population. So we changed to another model.”

The new version will follow the host’s political system, said Ko. “We don’t have a separate border or our own country – just a new city to let Hong Kong people live together and at the same time integrate with local businesses so we can maximise the benefits to both sides.”

Ko said he hoped to lead a delegation to Ireland later this year, if pandemic restrictions ease, to meet local people and inspect potential sites.

Attractions included Ireland’s low population density and Brexit creating opportunities for its financial services sector, Ko said. He added he was considering additional countries, which he declined to name.

Paddy Malone, a spokesperson for Dundalk’s chamber of commerce, said the M1 corridor region between Dublin and Belfast could host such a city. “We would be ideally located to facilitate this in that we have the infrastructure in place to cope with an expansion.”

Settlers from Hong Kong would enjoy fast broadband, access to three airports and seven universities and be able to commute from Northern Ireland should they prefer to live in the UK, he said. “If it’s going to be accommodated in Ireland we are the prime location.”

China’s recent imposition of national security laws in the region has prompted many Hongkongers to consider leaving. The British government has promised to provide assistance and relocation.

n a Charter Cities Institute podcast Ko compared any such migration to those who sailed on the Mayflower to America in 1620. “We are in pursuit of freedom and democracy, which is a little bit similar to the pilgrims and the puritans who left Europe in pursuit of religious freedom.”