Source: NYT (7/6/20)
Seized by the Police, an Outspoken Chinese Professor Sees Fears Come True
阅读简体中文版 | 閱讀繁體中文版
Xu Zhangrun, who has long taught law at the prestigious Tsinghua University, is one of the few academics in China who have harshly criticized the ruling Communist Party.
By Chris Buckley 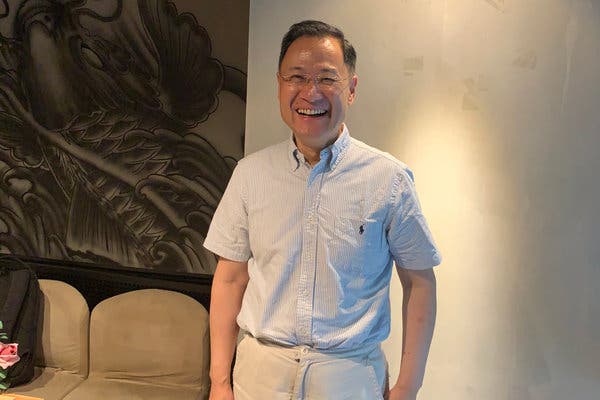 Xu Zhangrun, a law professor in China who was detained by the police in Beijing on Monday. Credit…The New York Times

The Chinese law professor had stored a few pairs of underwear and a toothbrush in a small bag, close at hand for the day when the police detained him for his unsparing criticism of the Communist Party under Xi Jinping.

That day appears to have arrived.

On Monday morning, the police showed up in force at the home of the scholar, Xu Zhangrun, in northern Beijing and took him away, according to three friends. He was detained on an accusation of consorting with prostitutes, according to Geng Xiaonan, a friend who said she had spoken to the scholar’s wife and students.

“It’s just the kind of vile slander that they use against someone they want to silence,” said Ms. Geng, a businesswoman involved in film and publishing.

“He foresaw this day,” she said. “He kept some clothes in a bag hanging inside his front door, so he wouldn’t have to go without a change when they took him away.”

Professor Xu, 57, is one of the few prominent Chinese academics who have dared to speak out against the ruling party as Mr. Xi has tightened controls on universities. He came to wider prominence after publishing an essay in 2018 that, without naming Mr. Xi, condemned his government for stifling even the narrow space for debate that the party had previously tolerated.

Now Professor Xu may join the growing list of critics of the party who have been imprisoned, unless the authorities decide that staining him with a lesser criminal charge — such as soliciting prostitution — is enough and let him go soon. The authorities have used similar charges in the past in what appeared to be attempts to discredit government critics.

“The old saying from the Song dynasty goes ‘If you want to accuse someone of a crime, there’ll always be an excuse’,” Geremie R. Barmé, an Australian Sinologist in New Zealand who has translated many of Professor Xu’s essays, said by telephone.

Over two years ago, Mr. Barmé said, Professor Xu mentioned the risk that “they would try and get him on soliciting prostitutes,” and he took care to avoid being set up for the crime.

The Beijing police did not respond to faxed questions and phone calls about Professor Xu’s detention and whereabouts; nor did the law school at Tsinghua University, where he has long taught.

In addition to Ms. Geng, the news of his detention was corroborated by two close friends in Beijing who spoke on the condition of anonymity, citing worries that they would also be detained. Other friends who had tried to call him throughout the day said that he did not respond to messages and that his phone was off.

Professor Xu’s detention is the latest example of the Chinese government’s expansive efforts to quash dissent. Since Mr. Xi came to power, the party has mounted an intense campaign in universities and among publishers to discredit and silence liberal ideas, such as constitutional checks on party power and an unfettered civil society.

In April, the Communist Party authorities confirmed that Ren Zhiqiang, a real estate tycoon in Beijing who once hobnobbed with party leaders, was under investigation after writing a bold online essay that derided Mr. Xi as a power-hungry “clown.”

Xu Zhiyong, a law academic turned activist who was previously imprisoned after organizing a campaign for civic rights, was detained again earlier this year after attending a gathering of rights activists and issuing a blistering denunciation of Mr. Xi’s handling of the coronavirus outbreak. The two Mr. Xus are not related.

“Professor Xu’s arrest this morning is yet another reminder — as if more were needed — of how easily and willingly the Chinese authorities abuse the law to target those who express views they don’t want people to read or hear,” said Joshua Rosenzweig, the head of Amnesty International’s China team. “One of the biggest concerns has to be that the police will charge him with national security charges.”

Professor Xu’s recent political writings have been censored and banned in mainland China, although they circulate surreptitiously on the internet. But he has published several books in Hong Kong, including two collections of essays last year.

“He avoids entirely the wooden language of Chinese officialdom,” Mr. Barmé said. “He writes using a language of profound classical resonance that also refers to some of the greatest Western writers.”

Professor Xu has taught at Tsinghua University — a prestigious school in Beijing that was attended by Mr. Xi and other Communist Party leaders — for over 20 years after completing a doctorate at the University of Melbourne in Australia. For many years, he researched criminology and Chinese legal thought, without attracting the ire of the authorities.

He first drew widespread attention and scorn from defenders of the party for an essay in 2018 that denounced Mr. Xi’s increasingly hard-line politics. He then unleashed a burst of essays that, using barbed, elegant Chinese, condemned and ridiculed the swelling dominance of the party under Mr. Xi.

“People nationwide, including the entire bureaucratic elite, feel once more lost in uncertainty about the direction of the country and about their own personal security,” Professor Xu wrote in his essay from 2018.

Tsinghua banned him from teaching and conducting research in 2019, but he kept writing despite warnings from university officials and the threat of additional punishment. This year, he issued essays blasting the Chinese government for delays and deception in the first months of the coronavirus epidemic, which began in Wuhan, a city in central China.

“The coronavirus epidemic has revealed the rotten core of Chinese governance,” Professor Xu wrote in February, according to a translation by Mr. Barmé.

In that essay and a later one, Professor Xu said he understood the risks he faced for continuing to speak out.

“I can all too easily predict that I will be subjected to new punishments,” he wrote in May. “Indeed, this may well even be the last thing I write.”