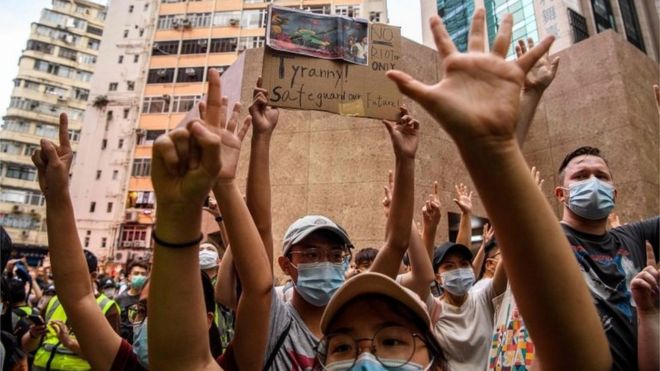 There have been protests against the new law in Hong Kong, despite fears of stiff punishments. AFP

Books by pro-democracy figures have been removed from public libraries in Hong Kong in the wake of a controversial new security law. The works will be reviewed to see if they violate the new law, the authority which runs the libraries said.

The legislation targets secession, subversion and terrorism with punishments of up to life in prison. Opponents say it erodes the territory’s freedoms as a semi-autonomous region of China. Beijing rejects this.

Hong Kong’s sovereignty was handed back to China by Britain in 1997 and certain rights were supposed to be guaranteed for at least 50 years under the “one country, two systems” agreement.

Since the security law came into effect on Tuesday, several leading pro-democracy activists have stepped down from their roles. One of them – one-time student leader and local legislator Nathan Law – has fled the territory.

At least nine books have become unavailable or marked as “under review”, according to the South China Morning Post newspaper. They include books authored or co-authored by Joshua Wong, a prominent pro-democracy activist, and pro-democracy politician Tanya Chan.

On Saturday, Mr Wong tweeted that the new law “imposes a mainland-style censorship regime” on Hong Kong, calling it “one step away from … actual book banning”.

Beijing has dismissed criticism of the law, saying it is necessary to stop the type of mass pro-democracy protests seen in Hong Kong during much of 2019, which at times exploded into very violent clashes between protesters and police.

It has rejected complaints by the UK and other Western nations that it is in breach of guarantees it made to protect Hong Kong’s unique freedoms as interference in its internal affairs.

Hong Kong was promised certain political freedoms for 50 years after the handover. It was guaranteed rights such as freedom of speech, freedom of assembly and an independent judicial system.

To many Hong Kong residents, the national security law represents a premature end to those freedoms.

Supporters say the law will help to restore order after a year of protest. But critics say it is being used to criminalise opposition to Beijing.

The removal of political books from public libraries would have been unimaginable just a week ago. In today’s Hong Kong, business owners remove messages of support for the protest movement from their premises, fearful that they could be interpreted as attempts at inciting subversion.

So far, 10 people have been arrested for allegedly violating the new law. But fear and uncertainty are widespread. Protesters now call for demonstrators to hold up blank placards at marches. They fear that their words could lead to life imprisonment.

What is the security law?

The law is wide-ranging, and gives Beijing powers to shape life in Hong Kong that it has never had before. The law makes inciting hatred of China’s central government and Hong Kong’s regional government offences.

It also allows for closed-door trials, wire-tapping of suspects and the potential for suspects to be tried on the Chinese mainland.

Many residents worry the new law means the end of the “one country, two systems” principle

Acts including damaging public transport facilities – which often happened during the 2019 protests – can be considered terrorism.

There are also concerns over online freedom as internet providers might have to hand over data if requested by police.