Source: NYT (6/2/20)
As Protests Engulf the United States, China Revels in the Unrest
Chinese officials and state media are seizing on the moment to tout Beijing’s authoritarian system and condemn American hypocrisy — a narrative that ignores many of their own issues.
By Javier Hernandez 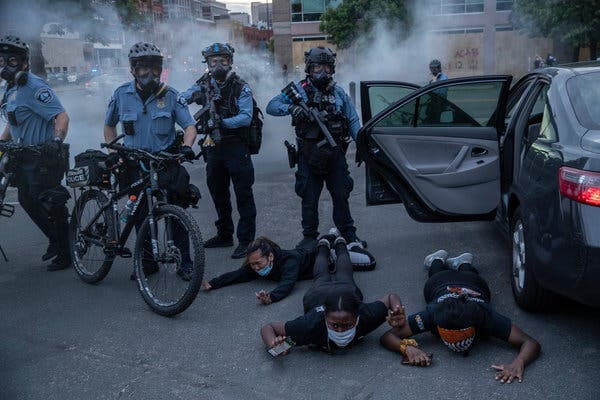 Protesters being detained by the police in Minneapolis on Sunday. Credit…Victor J. Blue for The New York Times

The cartoon shows the Statue of Liberty cracking into pieces, a police officer breaking through its copper robe. A man’s head lies on the ground in front of the White House, its facade splattered with blood.

“Beneath human rights,” says the title of the cartoon, which was published by People’s Daily, the Chinese Communist Party’s flagship newspaper, and circulated widely on social media sites this week. As protests over police violence engulf hundreds of cities in the United States, China is reveling in the moment, seizing on the unrest to tout the strength of its authoritarian system and to portray the turmoil as yet another sign of American hypocrisy and decline. It is a narrative that conveniently ignores many of the country’s own problems, including its history of ethnic discrimination, its record on human rights and its efforts to suppress protests in Hong Kong.

Chinese officials are trolling their American counterparts with protest slogans like “Black lives matter” and “I can’t breathe.” The state-run media is featuring stories about the “double standards” of the United States for supporting the Hong Kong demonstrators. Prominent Chinese commentators are arguing that American-style democracy is a sham, pointing to the country’s bungled response to the coronavirus pandemic and ongoing racial tensions.

“This situation in the U.S. will make more Chinese people support the Chinese government in its efforts to denounce and counter America,” Song Guoyou, a scholar at Fudan University in Shanghai, said in an interview. “The moral ground of the United States is indeed greatly weakened.”

The propaganda push is the latest skirmish in a longstanding power struggle between China and the United States, with tensions between the two countries at their lowest point in decades.

President Trump has accused Beijing of covering up the coronavirus outbreak that began in the Chinese city of Wuhan, saying China should be held responsible for deaths in the United States and around the world. He has also threatened to punish China for moving to adopt a broad new security law in Hong Kong by curtailing the city’s special relationship with the United States.

Now, the protests in the United States are giving Mr. Xi and the Communist Party’s propagandists a natural line of counter attack.

Chinese social media sites are rife with video clips of tense standoffs between the police and protesters in the aftermath of the death last week of George Floyd, after he was pinned to the ground by a white Minneapolis police officer who has since been charged with murder. Television shows feature videos of National Guard troops patrolling city streets, as broadcasters describe the long history of discrimination against minorities in the United States. Social media sites are portraying America as unruly and chaotic: “This is not Syria, this is the U.S.!” read a caption on one popular site.

Global Times, a nationalistic newspaper controlled by the party, called on the American government to “stand with the Minnesota people.” Its editor, in a tweet, pointedly called out Secretary of State Mike Pompeo, who had said “we stand by the people of Hong Kong” in his condemnation of Beijing’s move to impose national security rules. “The violent protests in the streets of urban America are further discrediting the U.S. in the eyes of ordinary Chinese,” said Susan Shirk, chair of the U.C. San Diego 21st Century China Center. “The propaganda depicts American politicians as hypocrites living in glass houses while throwing stones at China.”

Ms. Shirk said that as the reputation of the United States suffers in China fewer people might be willing to voice support for American ideals, such as free markets and civil liberties.

“Even without the propaganda, Chinese people nowadays find little to admire in the U.S.,” she said. “As the U.S. model is tarnished, the voice of Chinese liberals is silenced.”

While Chinese officials have gleefully joined the global chorus of criticism aimed at the United States, the unrest has put them in an awkward position.

China’s government has long maintained strict limits on free speech and activism, and the authorities often resort to aggressive tactics to quash unrest. The police in Hong Kong, where the government is backed by Beijing, have been accused of using excessive force as it has sought to rein in antigovernment protests that have convulsed the semiautonomous territory over the past year. 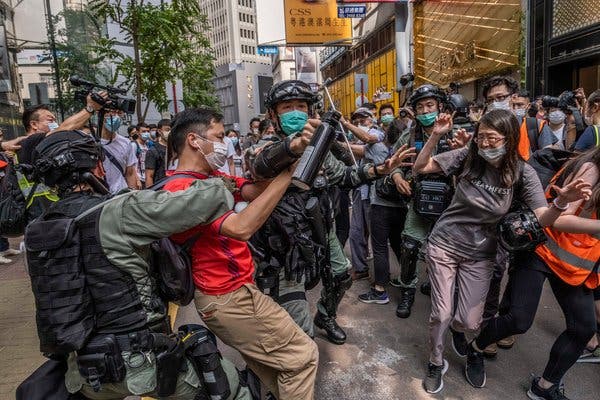 The police in Hong Kong have been accused of using excessive force to rein in protesters. Credit…Lam Yik Fei for The New York Times

With the comparisons to Hong Kong unmistakable, many mainland commentators have stopped short of endorsing the tactics used by American protesters, instead denouncing racism in the United States in general terms and rehashing protest slogans.

“The chronic racial wound in the United States is now smarting again,” said a recent report by Xinhua, the state-run news agency.

The Chinese government, in its first official statement on Mr. Trump’s move against Beijing’s national security rules, directly called out the United States for hypocrisy. A spokesman for China’s foreign ministry, Zhao Lijian, noted on Monday how American officials have portrayed protesters in their own country as “thugs” but glorified Hong Kong protesters as “heroes.”

Chinese officials, wading into the complex racial politics of the United States, have sometimes struggled with striking the right note.

A spokeswoman for the Chinese foreign ministry, Hua Chunying, was widely praised in China recently when she wrote “I can’t breathe” in response to a critical Twitter post by an American official.

But she had less success with a post on Monday, when she wrote “All lives matter,” apparently unaware she was embracing a slogan that has been used in the United States to criticize the #BlackLivesMatter movement.

Chinese officials have used the protests to revive favorite propaganda themes, including the idea that the United States acts as a bully on the world stage, meddling in the affairs of other countries. Hong Kong has been a particular point of contention, with many news outlets in China pairing images of burning buildings and flags in American cities alongside comments last year by Nancy Pelosi, the speaker of the House, praising demonstrations in Hong Kong. Ms. Pelosi said the city’s protests were a “beautiful sight to behold.” The editor in chief of Global Times, Hu Xijin, said that the attacks were to be expected given the intense criticism of China by American officials over the past year.

“It’s a kind of vengeful feeling, which I think is human nature,” he said in an interview. “Americans shouldn’t be unhappy about it.”

Mr. Hu said the unrest in the United States, as well as the failures in the country’s response to the coronavirus pandemic, had strengthened confidence among many Chinese in Beijing’s political system.

“It has made them believe that the government of this country really cares about people’s lives and well-being,” he said. “They see how the U.S. government and capital despise the lives and interests of vulnerable and marginalized groups.”

Nationalism has been in full force in recent days on the Chinese internet, with many people taking to Weibo, a popular microblogging platform, to denounce the “arrogance” of the United States and Mr. Trump. Hashtags about the American protests, including the decision to deploy the National Guard in some cities, are among the most popular topics on the site.

Some worry that the propaganda campaign may further inflame tensions between the two countries. He Weifang, an outspoken law professor in Beijing, said that even some critics of the government are becoming more sympathetic to the official line.

“Any Chinese with a brain,” he said, “would not simply look at it as China being so successful and the U.S. being a failure.”

But, he added, “with the terrible compression of space for free speech, many people’s heads are gradually broken.”