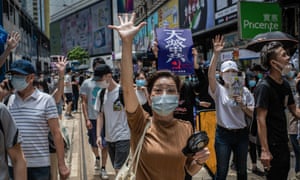 Taiwan will provide the people of Hong Kong with “necessary assistance”, President Tsai Ing-wen has said, after a resurgence in protests in the Chinese-ruled territory against newly proposed national security legislation from Beijing.

Taiwan has become a refuge for a small but growing number of pro-democracy protesters fleeing Hong Kong, which has been convulsed since last year by protests.

Hong Kong police fired tear gas and water cannon to disperse thousands of people who rallied on Sunday to protest against Beijing’s plan to impose national security laws on the city.

Writing on her Facebook page late on Sunday, Tsai said the proposed legislation was a serious threat to Hong Kong’s freedoms and judicial independence.

Bullets and repression are not the way to deal with the aspirations of Hong Kong’s people for freedom and democracy, she added.

“In face of the changing situation, the international community has proactively stretched out a helping hand to Hong Kong’s people,” Tsai wrote.

Taiwan will “even more proactively perfect and forge ahead with relevant support work, and provide Hong Kong’s people with necessary assistance,’” she wrote.

Taiwan has no law on refugees that could be applied to Hong Kong protesters who seek asylum on the island. Its laws do promise, though, to help Hong Kong citizens whose safety and liberty are threatened for political reasons.

The Hong Kong protests have won widespread sympathy in Taiwan, and the support for the protesters by Tsai and her administration have worsened already poor ties between Taipei and Beijing.

Hong Kong officials have said they support the looming legislation. On Monday, Hong Kong’s security chief said “terrorism” was growing in the city, as government departments rallied behind Beijing’s plans to introduce the national security laws.

“Terrorism is growing in the city and activities which harm national security, such as ‘Hong Kong independence’, become more rampant,” Secretary for Security John Lee said in a statement.

“In just a few months, Hong Kong has changed from one of the safest cities in the world to a city shrouded in the shadow of violence,” he said.

Hong Kong’s former chief executive Tung Chee-hwa said the plan was the “best cure” for his city’s recent instability while the acting head of the immigration department said it supported Beijing decision and would “strictly control immigration” to prevent any activities that “endanger national security”.

The decision has continued to invite criticism within Hong Kong. The Hong Kong Bar Association said the legislation by China’s National People’s Congress would violate the territory’s de-facto constitution, which explicitly states that Hong Kong enact its own national security law.

“This is unprecedented. The public must be allowed the opportunity to properly consider and debate about proposed laws which affect their personal rights and obligations,” it said in a statement.

Chinese officials on Monday sought to reassure the public, while also threatening “to hit back at any possible sanctions from Washington. Chinese foreign ministry spokesman Zhao Lijian told reporters that Beijing would take “countermeasures” against any US attempt to harm the country’s national security.

Xie Feng, commissioner of China’s ministry of foreign affairs in Hong Kong said that some of the protest activities last year were “terrorist in nature”. Noting that that the law will only affect a small number of residents, he said there is “absolutely no need to panic.”

Officials in Beijing and Hong Kong have bristled at the growing international condemnation of the move to impose national security laws and accused those supported the protesters of foreign interference. Hong Kong China has accused supporters of Taiwan independence of colluding with the protesters.

China believes Tsai to be a “separatist” bent on declaring the island’s formal independence. Tsai says Taiwan is already an independent country called the Republic of China, its official name.

Reuters contributed to this report