All images are reproduced with permission, courtesy of the artist, Zhang Xiaogang and Pace Gallery.

Zhang Xiaogang, born in China in 1958, grew up during the Cultural Revolution and was among the first generation of artists to emerge from the newly reopened art schools after the death of Mao. He is today revered in China, and recognized internationally as one of China’s leading artists. He shows with Pace Gallery worldwide, but he lives and works in Beijing.

In late February, Zhang emailed me to say that he and his wife Jiajia “have been self-isolated at home for a month … during this special period. China is experiencing a double disaster – the challenge of disease and humanity.” Six weeks later (in April), he sent me a photo of a new self-portrait. In it, he sits on a brown sofa, eyes closed in contemplation, with a bell jar over his head. It is a poetic and poignant image that goes straight to my own sense of living in this moment of global infection. I don’t speak Chinese and Zhang doesn’t speak English. But this painting articulates a complicated set of feelings which we all understand. 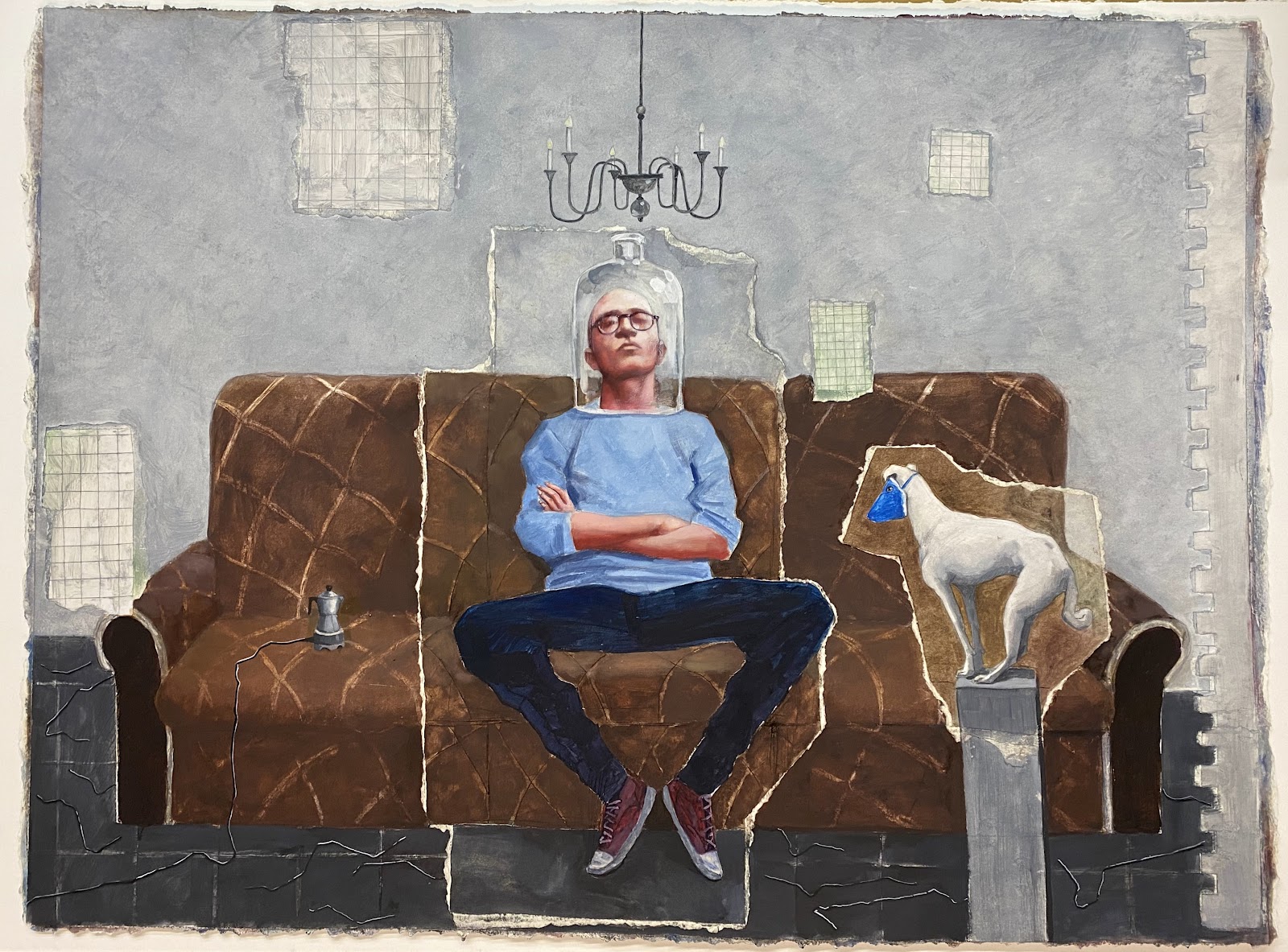 For Sylvia Plath, the bell jar provided a metaphor for psychic isolation and depression. That metaphor is not absent here, but Zhang takes it further into a meditation on an existential anxiety that is enfolded into the metaphysics of time and space in memory. He gives us pause to think about how we come to understand ourselves in the specificity of our moment and place. We see through the glass of the bell jar and yet it sets the head apart, like a specimen in a vacuum. The head seems disembodied by thought, separate from reality. This is the way I feel about being in the midst of this pandemic – here and yet somehow not here, as if my body exists in another reality. The figure is in the room with us, yet it exists within the edges of a carefully-torn fragment of paper, glued onto the surface. Leaving the ragged edge, the artist gives us a disjunctive sensation of the figure (and ourselves), simultaneously in the room and not.

Zhang’s studio assistants rescued the little dog from the streets. Now she feels for him, standing on a pedestal wearing a mask, like the masks we all wear now. But this mask covers her entire face and she peers out piteously through tiny eye holes towards her master. She is trapped in her own collage bubble, all the more distanced from him, but projecting her love, seeking a connection in this strangely disconnected time. The dog conveys what Zhang described as “the feeling of helplessness”; she embodies our apprehensiveness, balanced precariously on a perch barely big enough for her feet.

The ripped scraps of paper on which Zhang painted the figure, the dog, and the grids (some are pasted on and others dug into the paper) create both spatial and temporal disjunctures. “These people and objects come from different spaces,” he wrote me, “that makes the picture form an absurd contradiction that splits and overlaps.” Zhang complicates the continuity of reality itself into slightly discordant layers, just enough to elicit a general feeling of instability. At the right edge he painted what seems like the torn edge of a page ripped from a notebook, shifting the illusion of the picture space yet again.

In his 2018 exhibition at Pace Gallery in New York, Zhang showed a composition of three thermos bottles, painted on three sheets of paper, overlapping, with the center sheet lifted slightly higher. The shift emphasizes the separateness of the sheets. He painted two of the bottles over the two borders where the sheets overlap and then randomly dropped short strands of wire on the surface and painted over them to create a relief that defines yet a third spatial plane. His interest in the way that the two bottles simultaneously occupy the continuous space of the picture as well as the separate spaces of the individual sheets of paper, suggests an unsettling uncertainty of space and time. 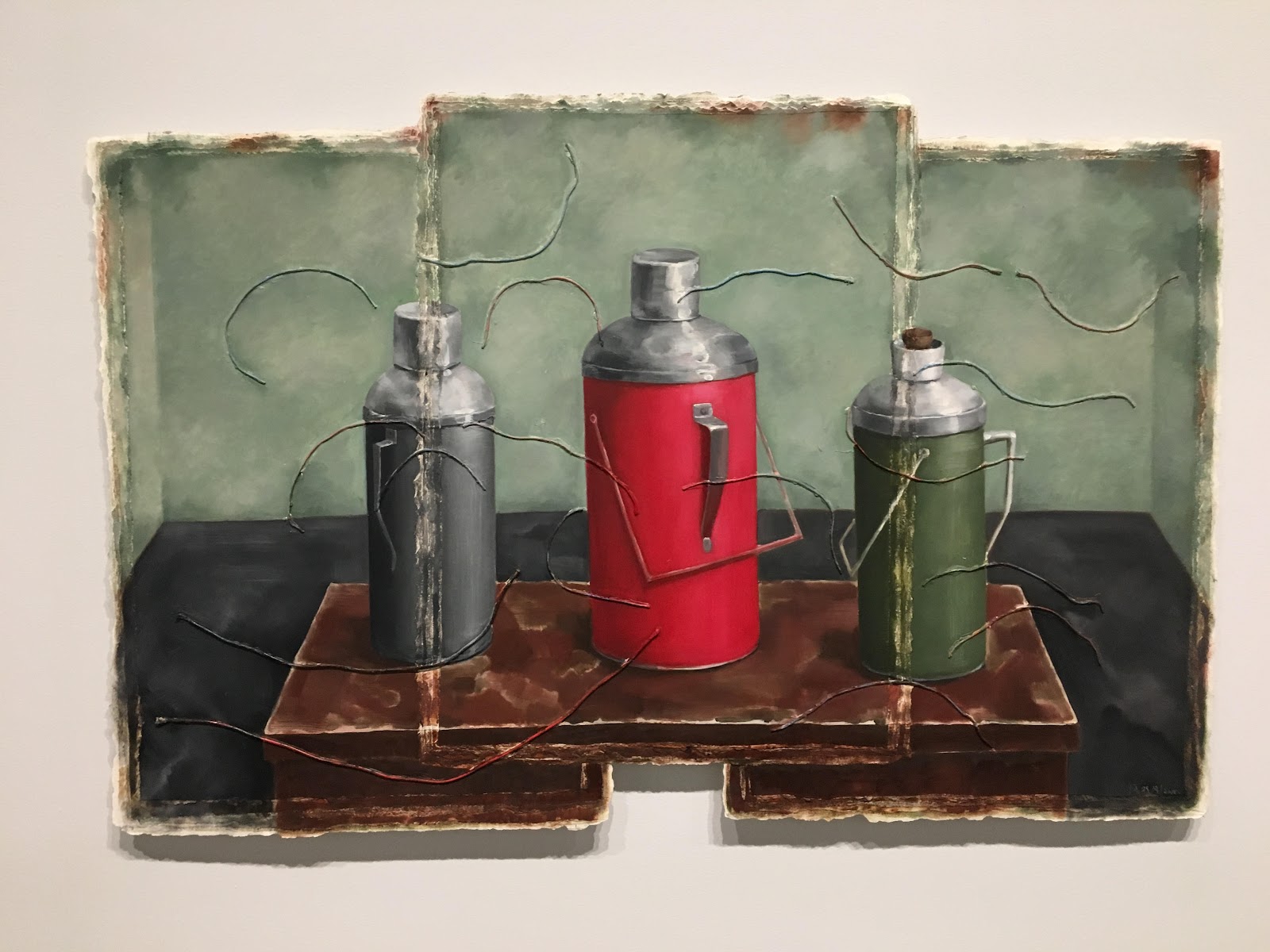 Zhang also used collage in this way for the several life-size figure compositions in his 2018 exhibition – figures that float unanchored in their fractured space and time. One of these is a small self-portrait that reappears in the background of the large Stage: Castle, which Zhang completed in February 2020. The spatial disjunctures in the still untitled self-portrait painted in April have a precedent here in the dream-like contextual jumps among the preternaturally specific, and yet enigmatic images. Stage: Castle consists of three canvases abutted into a continuous landscape painted in gray. In dramatic contrast, a bright yellow building stretches horizontally across the center. Zhang described this as “a typical building in the fifties to sixties of China, but finally, I kept the right part and then changed the left part into a building that comes from the countryside during the 1990s of China. Now, in my opinion, the strange building looks like an absurd castle when I juxtapose two buildings from different periods. To highlight the stage effect of the whole painting, I added screen-like elements to both edges.”

Stage: Castle evolved in the studio over the course of a decade and it has elements that go back to earlier phases of Zhang’s work in ways that reveal his deep preoccupation with the shifting relations of memory, present reality, and psychic truth. It evokes a dream state related to the strangeness of living with the social distancing we are all enacting during this pandemic. The little rescue dog appears here with a young girl’s body, dressed in a neat pullover and skirt. She huddles shoulder to shoulder with a girl in a white dress (a stand-in for the artist that we’ve seen many times before, with big round glasses like his, and a sensitively focused gaze, looking straight at the viewer). They sit together on a dinner plate. A blindfolded man rides a wooden horse to the left and above him is an old Chinese postal box in a distinctly different landscape, pasted on in an oval patch that breaks the continuity of time and space like the collaged elements in the untitled self-portrait with the bell jar.

Zhang’s subjects percolate and then evolve, gathering a private symbolism that doesn’t quite translate into words. “They all seem to be possessed by some spirit,” and they show us how we process events in a continual flow from the immediate, to memory and subjectivity. Symbolic objects embody layered meanings that seem to move in and around in this charged mental space, in limbo between the real and the imagined in memory. They express, he said, “some of my inner feelings during this period” of the global pandemic, a “split, contradictory, absurd and even terrifying inner experience that constantly strikes me in reality.”

This play between the real and the imagined in the symbolic space of memory is already present in Zhang’s ghost drawings of 1984, made at the beginning of his career. He drew these sixteen pencil drawings in his mid-twenties when drinking and depression sent him to the hospital for nearly two months; in them, he imagined wrinkled bed sheets as apparitions. They are “all about death, disease, and despair, the significance of existence,” he told my students in 2007. In these compositions, the imaginary and the real flow into one another.  He takes a subject like The Ghost between Black and White No.5 People Picking Up Prescriptions from a scene of daily life in the hospital and transforms it through the lens of his depression and anxiety. The figures disintegrate almost into formlessness, describing their fleeting hold on being with a unique lucidity that defines Zhang’s distinctive voice for the first time. 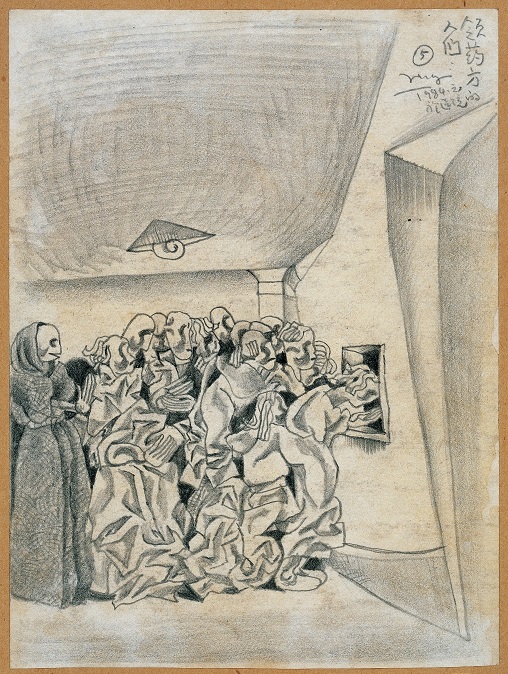 The Ghost between Black and White No.5 People Picking Up Prescriptions, Zhang Xiaogang (1984)

The catalogue of surrealist dream images develops through the later 1980s in Zhang’s paintings and then from 1993 to 2000 he made his famous Bloodline – Big Family paintings. Bloodline – Big Family (2000) features a family in Mao suits. In this series the fine red veins connect important things and people. Electrical wires, rhyming with the bloodlines, also appear in them and we still find them in the 2020 Stage: Castle. One wire ends with a two pronged plug, traveling back to the disembodied saluting arm, under the floating self-portrait figure, behind the girl and the dog, to the collage fragment at the left; another ends in a small electronic device, and a third trails across the middle background. 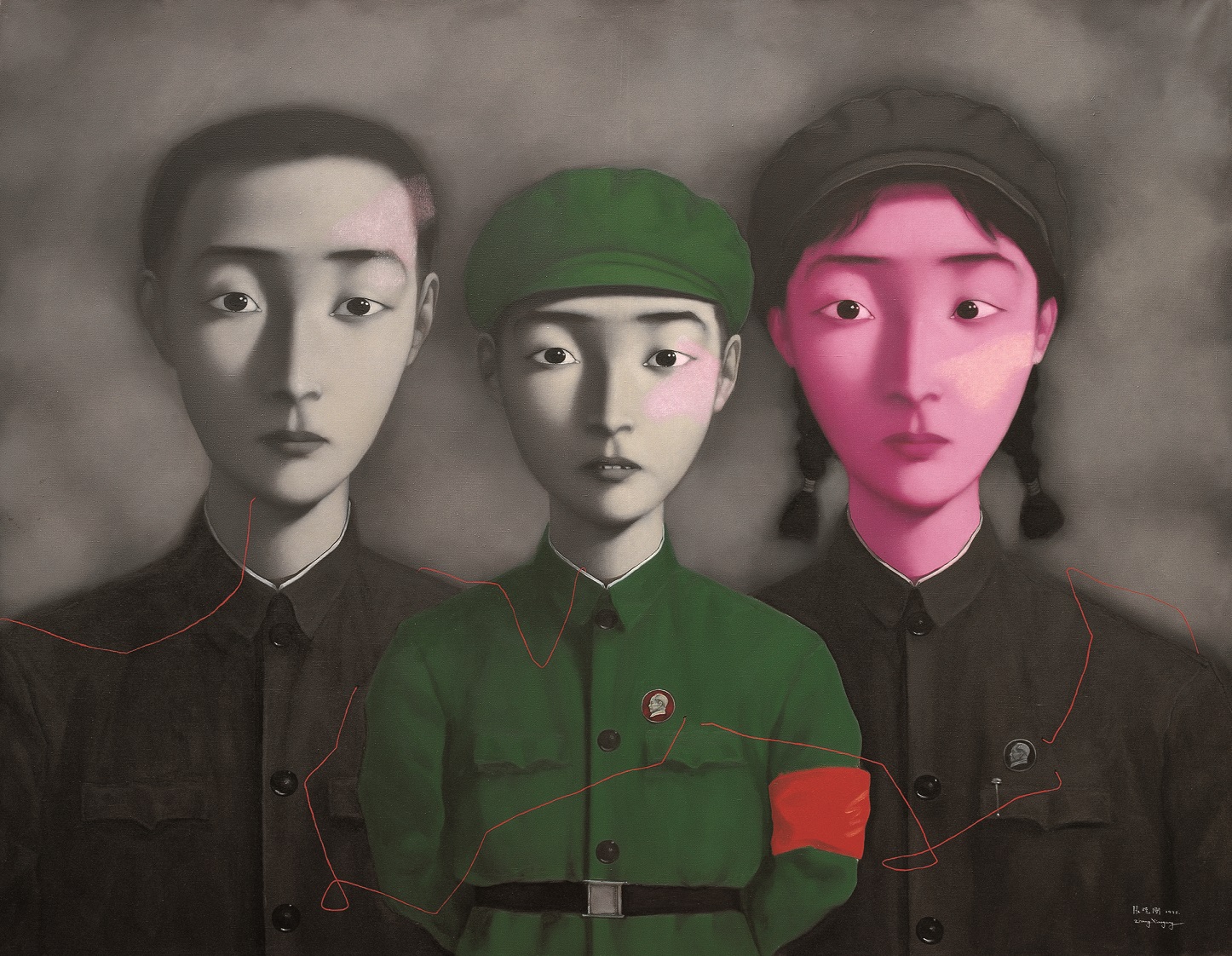 In a series called “Amnesia and Memory” produced in the early 2000s, Zhang created small paintings of these dream objects – an inkwell, a light bulb, a pen and paper, two feet (one shorn and one not); in the same series he also painted large, seemingly quite different canvases, filled edge to edge with faces, mysterious as though we are hallucinating them.

These works explicitly examine the evanescent relations of images in the mind. In 2005 and 2006 Zhang began painting and writing over photographic images, and in 2009 he painted on mirrors that literally incorporate the perpetually changing reality of the room they (and we) are in. Then, in a 2016 show, Zhang dug deeply into a collection of symbolic images, many of them with childhood resonances, like the subjects in Stage: Castle. 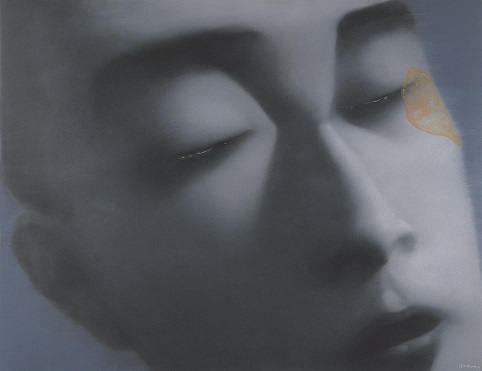 “I’m gradually trying to approach and express some of my inner feelings during this period [of the global pandemic],” Xiaogang recently wrote to me, “What I feel may come from some kind of split, contradictory, absurd and even terrifying inner experience that constantly strikes me in reality. It is also a long-term continuous understanding and cognition of painting.”Zhang belongs to the first generation of great artists to emerge after the Cultural Revolution. The incomprehensibility of the global tragedy that now engulfs us has resonances with that national trauma in China in the persistent undercurrent of dread as we go about the trivialities of our daily lives. At the same time we also see “simple kindnesses and pure affections” as he phrased it, that deeply move us. I live on the other side of the planet from Zhang Xiaogang and when we meet, we speak with a translator and a flurry of gestures, except across the language of his paintings. Those paintings capture this moment and integrate it into our own time, space, and memory. They need no translation.