Source: China File (5/15/20)
‘A Letter to My Friend under Quarantine in Wuhan’: A Roundup of China’s Best Photojournalism
By Ye Ming, Yan Cong, Beimeng Fu In this edition of Depth of Field, we highlight Chinese visual storytellers’ coverage of COVID-19 inside China. Some of these storytellers were on the ground documenting the experience of residents and medical workers in Wuhan, the city where the virus first emerged. Other storytellers were not able to travel to the outbreak’s epicenter because of Wuhan’s lockdown, which lasted from January 23 to April 8. But they found creative ways to cover the news from afar: photographing life under quarantine in other cities, stitching together social media footage, using publicly available information to explain the supply chain of medical masks. Their stories, told from diverse perspectives, depict pain, strength, and sacrifice amid the outbreak, and they leave us with lingering questions about what China—and the world—will look like, when they emerge from the crisis. 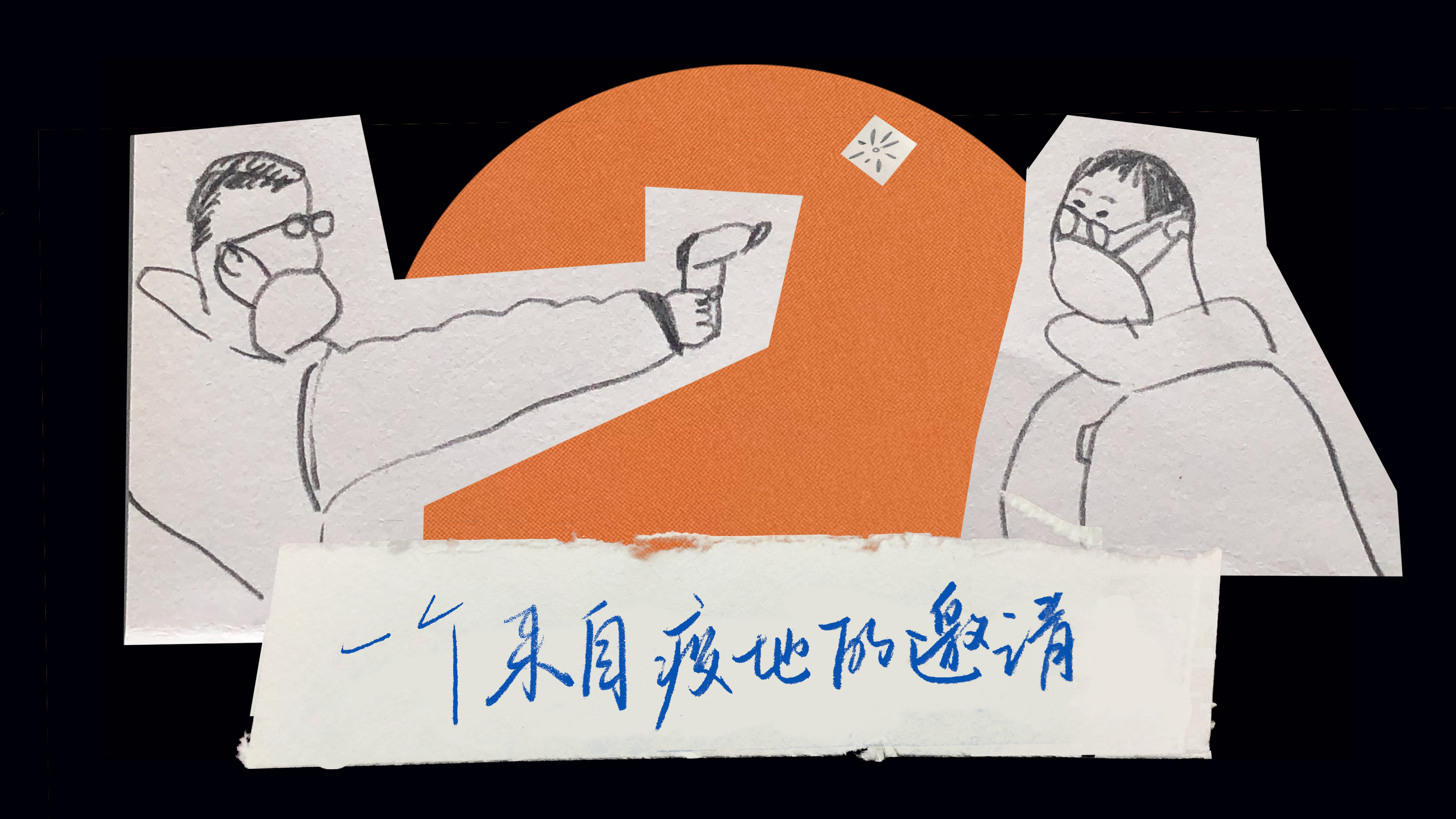 Documentary filmmaker Guo Ronghui published what she called a “video letter” to a friend under lockdown in Wuhan. Guo reads aloud from Chinese translations of Giovanni Boccaccio’s Decameron, Albert Camus’ The Plague, and Gabriel García Márquez’s Love in the Time of Cholera, over a montage of footage she collected from the Internet—men ice-swimming in protective masks, neighbors sharing drinks through their windows, as well as less tranquil scenes of street scuffles, temperature checkpoints, and barricaded doors. The film also lingers on footage of a lone pig running along a highway, apparently in complete solitude and freedom. Widely shared on social media, many of these surreal images have become memes whose origins are hard to track, yet together they constitute a shared memorial of fear and resilience. 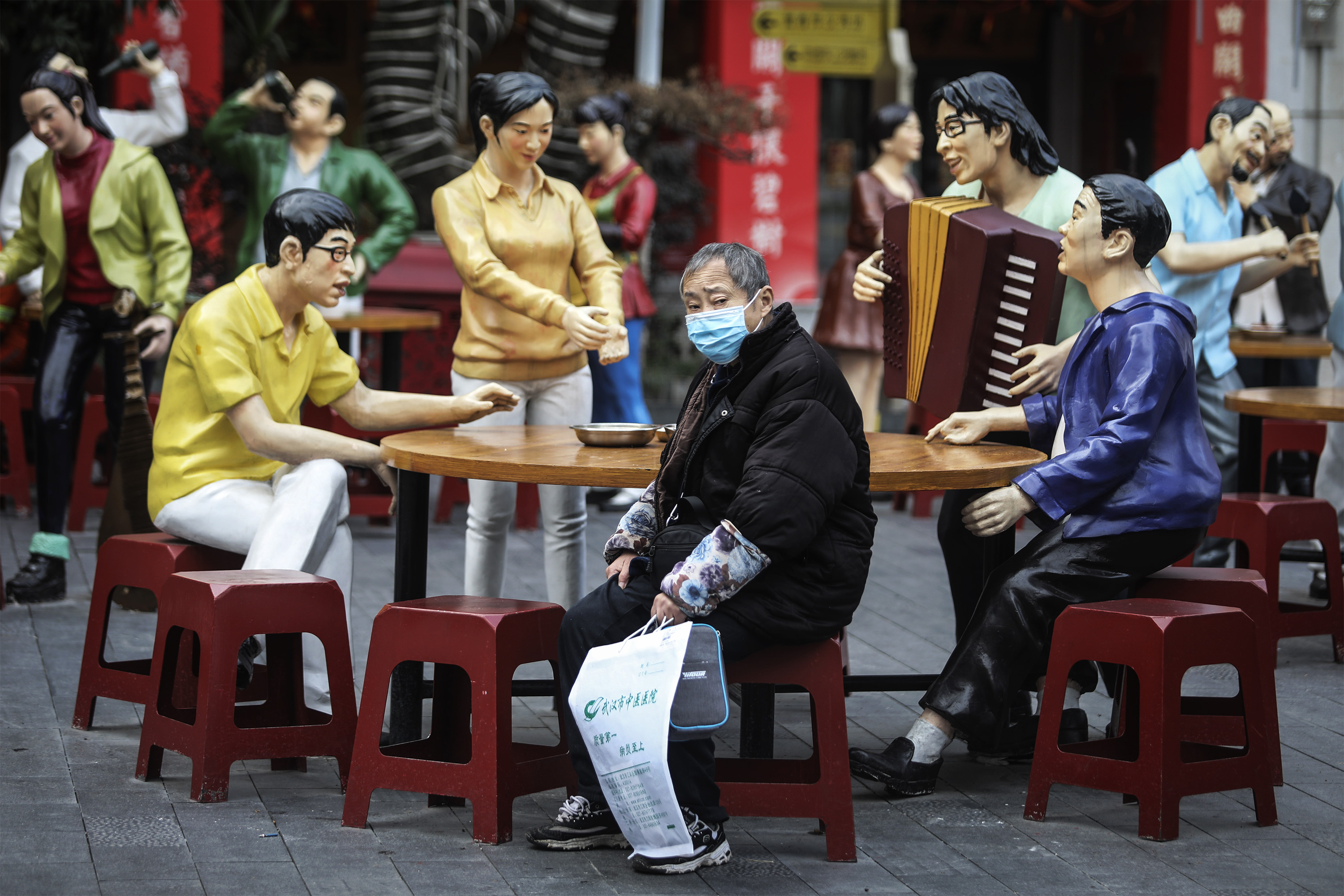 This gallery offers a glimpse of the transformation of Wuhan, hinting at the city’s irrepressible vitality even under lockdown. The two photographers, Wu Wei and Ke Hao, capture both the changed activities and the moods of a wide swath of the city’s populace: deliverymen unloading boxes of cabbage, masked women exercising outdoors, exhausted medical workers, and even patients in various stages of their encounter with the virus. In the photo above, an elderly woman rests on a stool near Jiqing Street, which bustled with food stalls selling local specialities before the pandemic hit. Her hand clutches a bag containing a CT scan. Around her, plastic sculptures assemble in a cruel reminder of how the city might have looked before the outbreak. 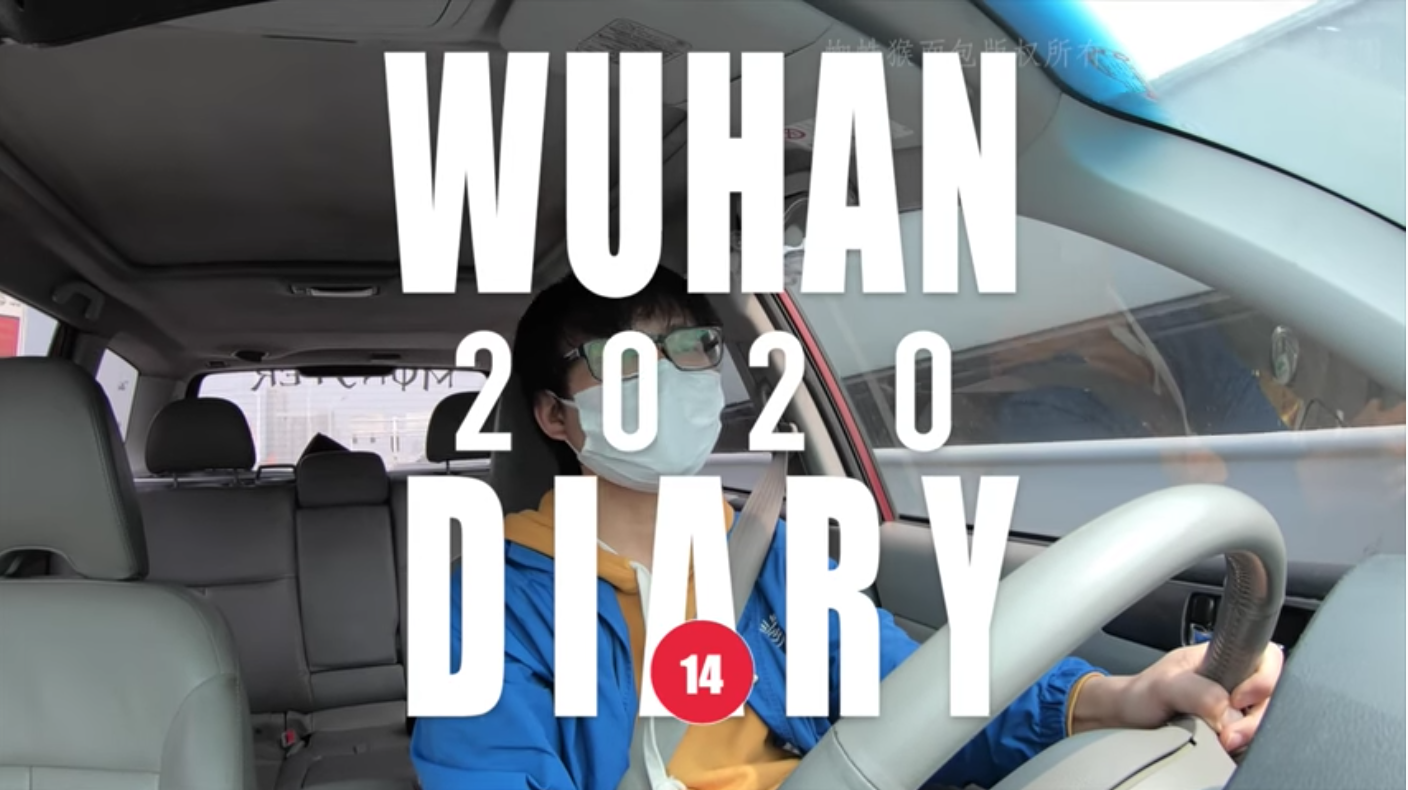 During the two months of lockdown in Wuhan, the outside world had limited reliable information about conditions on the ground there, as reporters, especially those from international media, struggled to gain access to the city. Many locally-based videographers and vloggers filled the void with personal video diaries. Among them is the whimsically-named vlogger “Spider Monkey Bread” (“蜘蛛猴面包”), who now has almost 5 million followers on Weibo and 23,000 followers on YouTube. His 20 video diaries show him driving around the empty city, telling stories about volunteers, medical workers, and ordinary people, while sometimes delivering medicine, driving people to the hospital, or handing out masks. In one heartbreaking scene, he captures a woman weeping in the street over the death of her father. In another, he talks to a group of migrant workers who lost their jobs and workplace dormitories during the shutdown, but were unable to leave the city because of travel restrictions and thus resorted to camping out in an underpass. 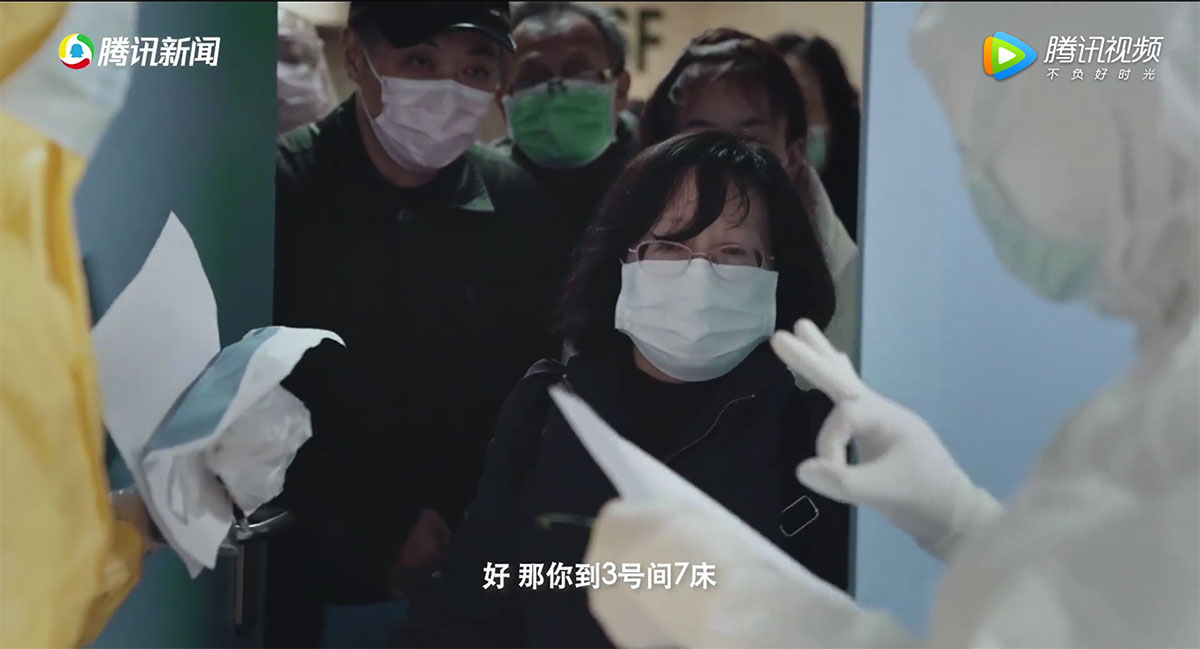 This 33-minute documentary by Chen Weixi for Esquire China presents the perspective of a team of medical workers from Nanjing, a government dispatch to the Guanggu branch of Wuhan’s Tongji Hospital on February 9 to treat COVID-19 patients. 17 medical teams from six provinces set up wards at Guanggu, adding 850 beds to the hospital’s capacity. Nearly as soon as the Nanjing team arrived, desperate patients were pounding on the door of their new ward, begging to be admitted. Over the course of several days, beginning on the day of the team’s arrival, Chen embedded himself in the hospital alongside these medical workers as they treated patients suffering from COVID-19. Despite the chaos and urgency of the situation, Chen shows how medical workers cared for patients beyond their medical needs, spending time comforting a disoriented elderly man with dementia, consoling a patient whose mother had died from the virus, and helping an elderly couple in separate wards see each other, even if only on screen. The video humanizes the patients and caregivers battling a merciless war.

(Note: This video is only licensed to be viewed within China.)
Watch the video…

A Grandmother Fortifies Herself against COVID-19 | iFeng 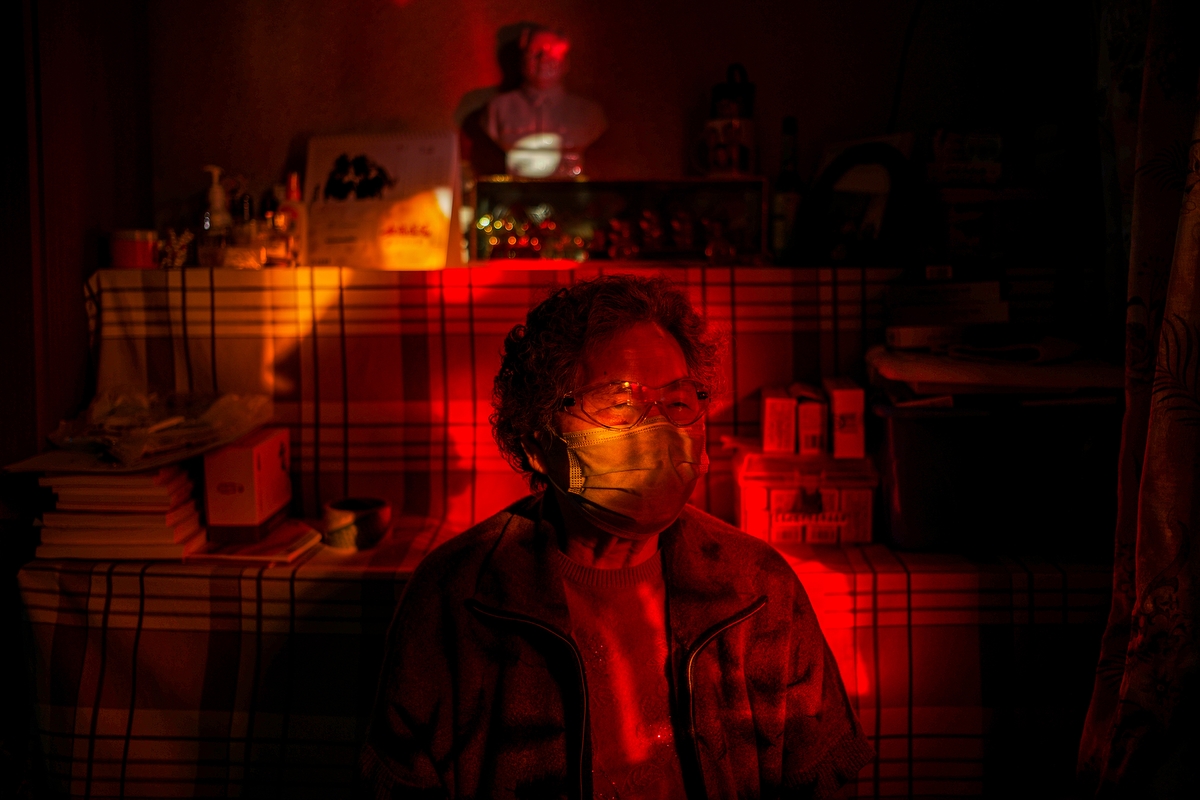 Photographer Pang Hai went to visit his grandmother in Beijing before Chinese New Year on January 23 and decided to stay with her for the initial period of the coronavirus outbreak. He witnessed and documented an unusual Chinese New Year; his grandmother had asked the rest of the family to stay away. Visual coverage of COVID-19 has mostly focused on medics and empty streets, but this photo story—its moody images saturated with warm color—shows us what it’s like to take on a personal battle against the virus as an 81-year-old. Pang’s grandmother used a variety of wellness devices to boost her immune system, she stocked up on food and essentials days before other people started hoarding, and she learned how to video-chat with family and debunk misinformation using an iPad.

Why Can’t You Buy a Mask? | PaperClip 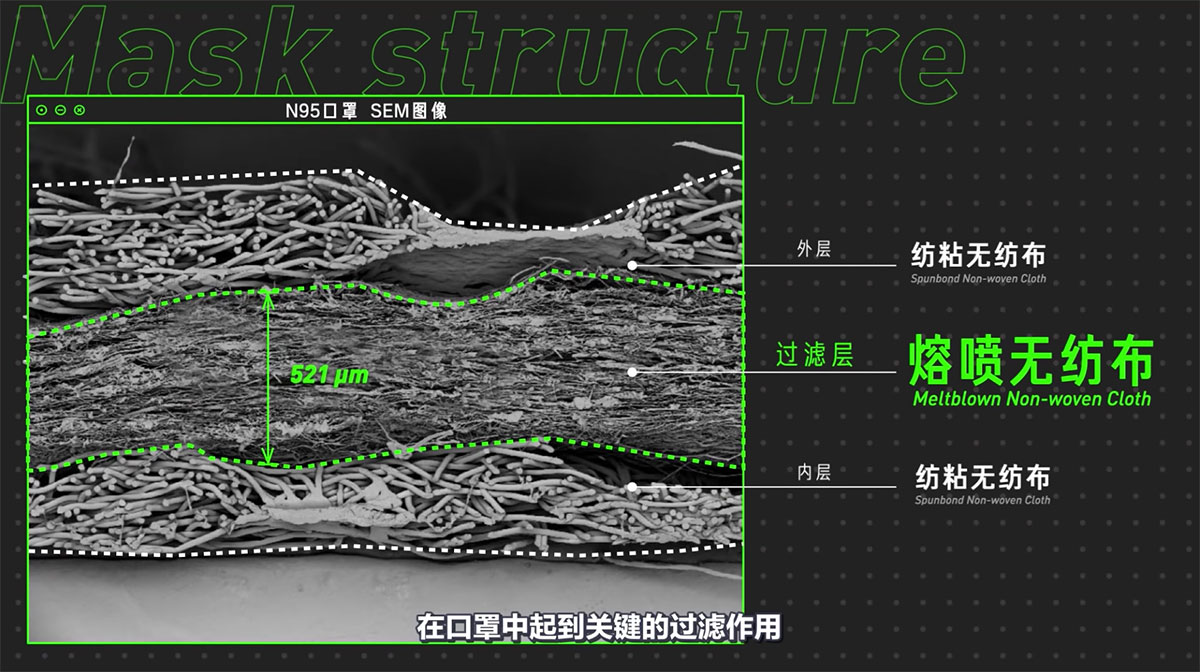 Shortly after the outbreak of COVID-19 started, China’s supply of medical facemasks quickly began to dry up. In 2019, producing about 10 million per day, Chinese manufacturers accounted for half of the global supply of masks. Yet, there was a national shortage during the initial period of the outbreak in late January and February as demand skyrocketed. Between January 24 and February 11, China imported 730 million masks. Since then, the government has dramatically expanded production capacity, increasing production to 116 million per day by the end of February. This video, released on February 29, explains the production stream of facemasks in China in the weeks following the Lunar New Year holiday, explaining the shortages, price hikes, and ramping up of manufacturing of one of the most sought-after safety devices in this crisis. 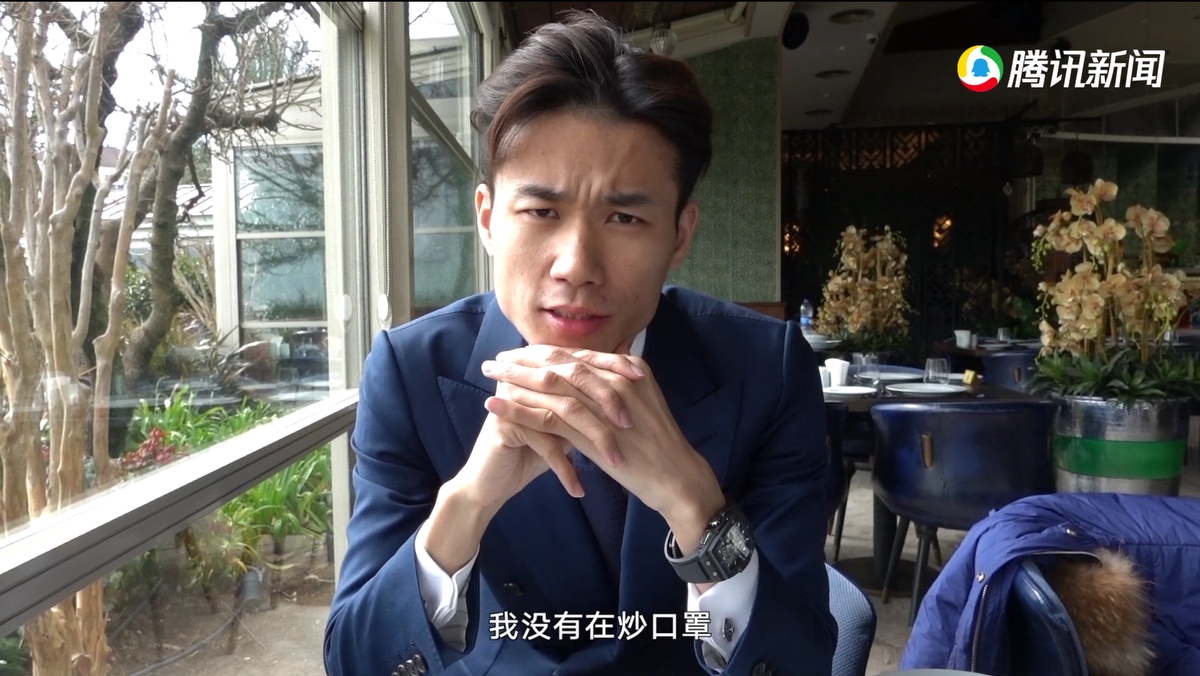 In April, the documentary “Mask Hunter” captivated Chinese netizens, attracting millions of views. From March 5 to 18, the filmmaker, Wu Dong (who goes by Hua Zong in the video), followed Lin Dong, a 30-year-old Chinese businessman from Guangdong province, as he went to Turkey to try to procure the raw materials necessary for the production of medical-grade face masks, and commission factories to produce the masks. Wu details Lin’s ostentatious and risky business endeavors. A rotating group of local suppliers flock to the five-star hotel where Lin was staying, all claiming to have the product he wanted: melt-blown fabric, a critical layer for producing medical-grade masks. Other times, Lin is seen flying on private jets to meet clients, and cutting deals with the help of a Turkish arms dealer who had jumped into mask-trading for its high profit margin (“100-300 percent, more than arms and drugs,” Lin says in the video). The filmmaker frequently confronts Lin about whether he is profiteering from a pandemic, but does not reach a conclusion. After the documentary was released, Lin garnered many fans—some were attracted by his good looks and sharp outfits, while others praised him as a businessman of conscience after seeing him reject low-quality products.

Coming Home to China During the Pandemic | iFeng 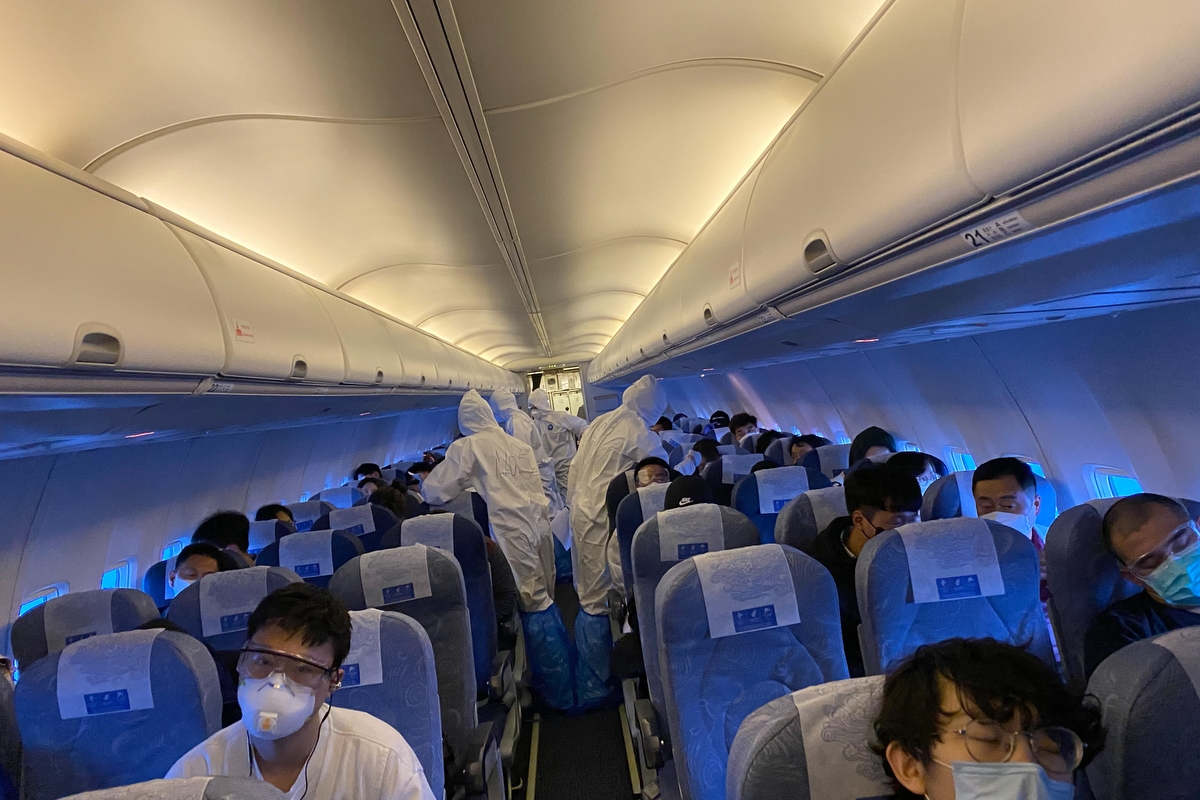 International travel amid the pandemic is stressful and expensive. And yet since mid-March, hundreds of thousands of Chinese citizens living abroad have returned to China, braving a dwindling number of international flights, expensive flight tickets, and tighter travel and transit restrictions across the globe. Depth of Field’s Yan Cong made one such journey, flying from New York to her home in Beijing in late March. Her original itinerary included a connecting flight in Hong Kong, but had to be changed after Hong Kong’s government banned transit travelers, 48 hours before her flight. She paid $2,600 for a new flight via Seoul. In this firsthand account, she documents her journey from a hotel room in Queens, through an empty JFK airport, to a COVID-19 test upon her arrival in Dalian, and finally to a quarantine hotel in Beijing.

Portraits of Wuhan | The Paper 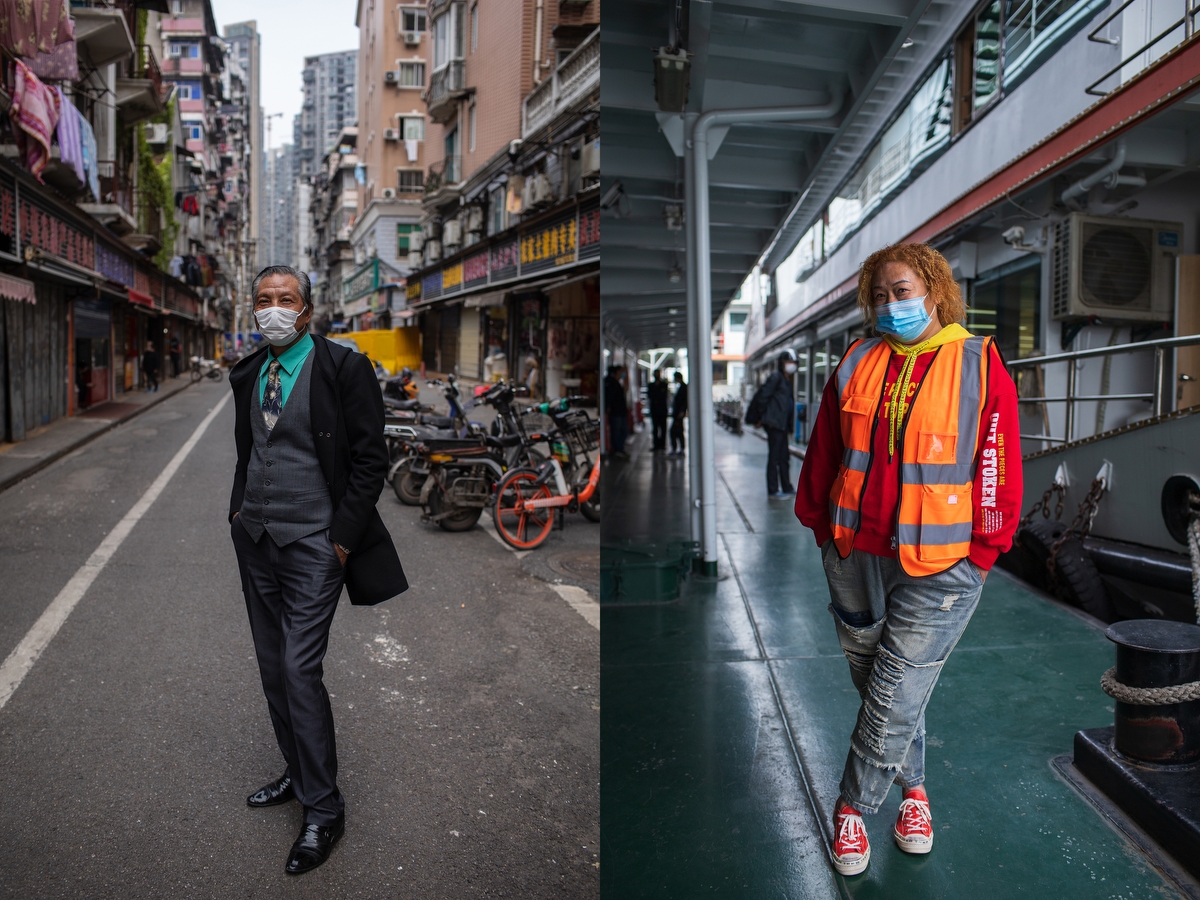 A man with salt-and-pepper hair in a three-piece suit, a woman in a full-body protective suit wearing a cross-body purse and a big shopping bag on her shoulder, a barber donned with a DIY back-facing breathing tube for work. These are people photographed by Zhong Ruijun in the streets of Wuhan in early April, around the time the city reopened. Zhong has extensive experience photographing celebrities, but he thinks people who are not trained to pose for photos reveal more of themselves in front of his camera. He was intrigued by the eye-catching style and surreal elements in them, but refrained to describe them as fashion; it seemed inappropriate in the time of a crisis, when some choices are aesthetic while others are purely practical. This body of work becomes “Wuhan Faces.” “The masks hide their faces, but cannot hide the light in their eyes. These faces are the portraits of life in Wuhan right now,” Zhong wrote.