Source: NYT (4/14/20)
She Kept a Diary of China’s Epidemic. Now She Faces a Political Storm.
阅读简体中文版 | 閱讀繁體中文版
“If authors have any responsibilities in the face of disaster, the greatest of them is to bear witness.” Here are excerpts from the author Fang Fang’s controversial chronicle of life and death in Wuhan. 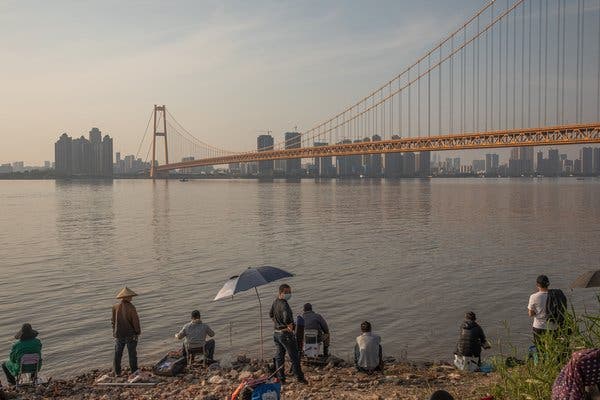 Fishing by the Yangtze River in Wuhan, China, on Monday. Credit…Roman Pilipey/EPA, via Shutterstock

As Wuhan was engulfed by the coronavirus, the Chinese author Fang Fang worked late into the night, writing a daily chronicle of life and death in her home city that gave rise to a global pandemic.

Her online diary, though sometimes censored, became vital reading for tens of millions of Chinese readers — a plain-spoken, spontaneous view into Wuhan residents’ fears, frustrations and hopes during their 11 weeks under lockdown in their homes.

Her account has recently drawn bitter condemnation from zealous Chinese nationalists who have called plans to publish a translation in English an effort to malign the government and undermine the heroic image of Wuhan.

Fang Fang, who uses her pen name rather than her birth name, Wang Fang, said that she did not want to be cast as either a cheerleader for the government, or as a reflexively embittered critic. She called herself a witness, highlighting the bravery of doctors, street cleaners and neighbors helping neighbors, while vowing to hold to account officials who let the virus spread.

“If authors have any responsibilities in the face of disaster, the greatest of them is to bear witness,” she said in an interview. “I’ve always cared about how the weak survive great upheavals. The individuals who are left out — they’ve always been my chief concern.”

Below are some translated excerpts from her diary, which she started on Jan. 25, two days after the lockdown in Wuhan began. Some passages have been condensed for space. 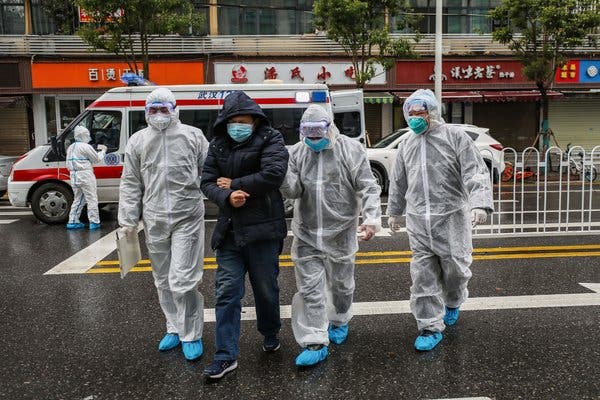 A patient being brought to a hospital in Wuhan on Jan. 26. Credit…Agence France-Presse — Getty Images

Born in 1955 in Nanjing, Fang Fang moved to the city when she was 2 years old, and has lived there for most of her life. Almost immediately, her diary drew interest from people across China eager for news from Wuhan, where residents and experts believed that the numbers of cases were much higher than official statistics said.

Thank you all for your concern and sympathy. The people of Wuhan are still at a critical time. They have moved past their initial terror, helplessness, anxiety and stress, and are much calmer and steadier. But still they need to be comforted and cheered on by everyone. As things stand, most Wuhan people are no longer paralyzed by shock. My initial idea had been to start from Dec. 31, recounting my journey from feeling alarmed to breathing easier. But that would have taken too long to write, so I’ll stick to putting down my latest impressions in real time, slowly compiling a “diary of a closed city.”

There was more bad news. My daughter told me yesterday that a friend’s father, who already had liver cancer, came down with a suspected case of infection and was taken to hospital. But nobody was on hand to save him and he died in three hours. That happened two or three days ago. Over the phone, she sounded very broken up. 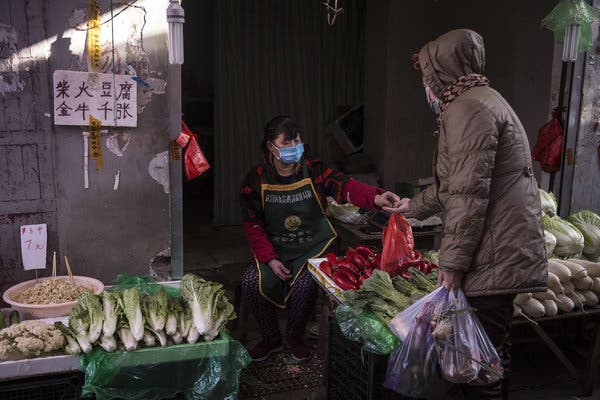 Fang Fang also used her diaries to give a flavor of life in Wuhan, a sprawling, riverside city that last year hosted the Military World Games, bringing together athletes from armed forces across the globe.

During the Military World Games, housing along the main streets was festooned with lights, each side twinkling in turn. Back then it felt like way too much for eyes and minds; it got on your nerves. Now driving down the chilly, deserted streets, those vibrant, flashing lights feel kind of comforting. Truly, that was then, and this is now.

The little supermarkets are still open, and vegetable sellers are still on the streetside. I bought some vegetables on the curb and picked up eggs and milk from a supermarket. It took stops at three supermarkets before I tracked down one with eggs. I asked if they were worried about becoming infected by staying open now. Their answer was matter-of-fact — we have to get through this, and so do you. True, they have to go on living and so do we, that’s the way it is. I often admire these working people. Sometimes a brief chat with them leaves me feeling mysteriously calmed. It was like that in those days and nights when Wuhan was gripped by the worst panic, and cold with wind and rain. On nearly every deserted, rain-swept street, a cleaning worker still meticulously swept away. Seeing them, I felt ashamed about feeling so tense, and all of a sudden I would calm down. 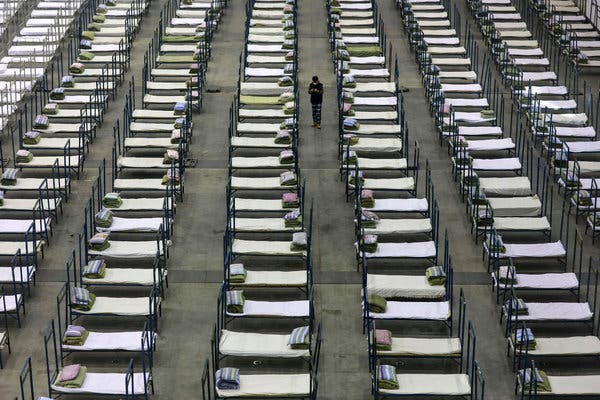 A convention center converted into a temporary hospital in Wuhan on Feb. 4. Credit…Chinatopix, via Associated Press

Fang Fang cites the lessons of the SARS epidemic of 2003, and blames the spread of the new coronavirus on officials intoxicated with political rhetoric who ignored pressing practical issues. “It’s true in life, especially in China, that too many people don’t grasp common sense, and they like to replace it with political formulas,” she said in an interview.

The enemy isn’t just the virus. We’re also our own enemies or accomplices in crime. It’s being said that many people are only now waking up, startled to grasp that it’s meaningless to yell empty slogans day in and day out about how amazing our country is, to grasp the total ineptitude of those officials who spend their days in political study and bloviating, and can’t get a real job done.

This lesson should have counted as profoundly searing. Still, although we experienced 2003, that was quickly forgotten. Now add to that the year 2020. Will we also forget it? The devil is always on our trail, and if we’re not on our guard, he’ll add another date until we wake up in torment. The question is: Do we want to wake up?

Feb. 7: “Tonight people in Wuhan want to turn their lights off at the moment when Li Wenliang died”
13,603 infections, 545 deaths in Wuhan 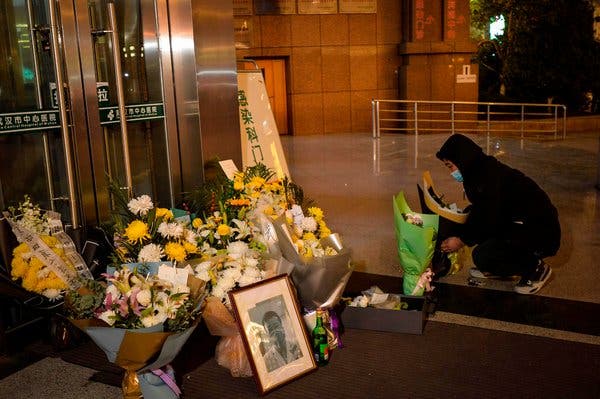 Sometimes Fang Fang’s entries dwelled on the big events, such as the death of Li Wenliang, the doctor who ignited nationwide mourning. Dr. Li tried to sound a warning in December but was officially reprimanded for “spreading rumors.” He died of the coronavirus.

Yesterday Li Wenliang died. I’m distraught. As soon it happened, my circle of friends said that night all of Wuhan was weeping for him. Who could have guessed that people across the whole of China were weeping for him! The flood of tears became a mighty wave on the internet! That night, Li Wenliang was ferried into another world on all the tears shed for him.

At midday shouts went out in Wuhan: We’ll be the ones to care for Li Wenliang’s family and children. The response was overwhelming. Tonight people in Wuhan want to turn their lights off at the moment when Li Wenliang died a night before and shine a ray of light into the sky using flashlights or cellphones while making a whistling noise. Li Wenliang was himself this ray of light in the heavy, dark night. 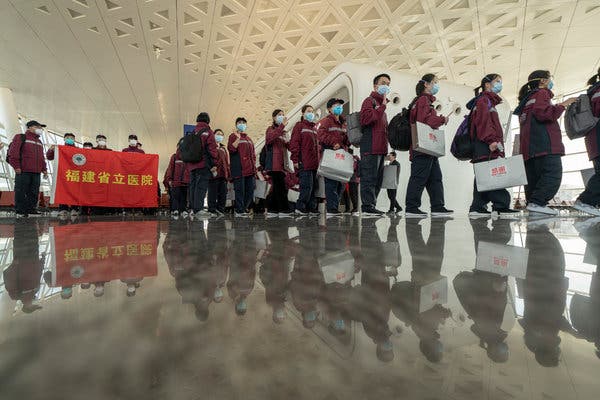 By March, the diary had attracted growing controversy and even conspiracy theories from ardently pro-party voices who accused her of maligning the government and pandering to foreign critics of China. Her reply to a reader who said he was a 16-year-old student was widely circulated as a counterattack to those critics.

Child, you said you’re 16. When I was 16 it was 1971 and back then if someone had told me that the “Cultural Revolution is a calamity” I would surely have taken him on till his head was covered in blood. I wouldn’t have listened, even if he tried to reason with me for three days and nights on end. That’s because from age 11 I’d been taught “the Cultural Revolution is of course good,” and by 16 I’d been taught that way for five years. Three days and three nights would never have been enough to win me over. By the same token, I can’t possibly overcome your disbelief.

But let me tell you, child, sooner or later your disbelief will be answered. That answer will have to come from you. In 10 years, maybe 20, there’ll come a day when you’ll think, wow, how childish and despicable I was back then. Because by then you may have become an entirely different you. Of course, if you take the path that those ultra-leftists want to lead you down, perhaps you’ll never get your own answer. 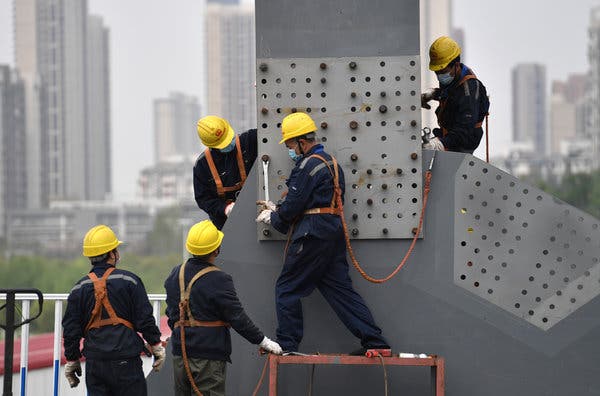 A photo released by the state-owned China Daily showed construction on a bridge in Wuhan on March 24. Credit…China Daily, via Reuters

China announced that Wuhan would end a nearly two-month lockdown in coming weeks, while the epidemic was exploding in the United States. Fang Fang’s diaries also came to an end.

Today will be the last entry, but that doesn’t mean I’ll stop writing. My Weibo will remain my platform, and I’ll give my views there just as before. Nor will I give up pressing for accountability. Many people have left messages saying that no officials will be held accountable, that there’s no hope in sight for that. As for whether they will ultimately be held responsible, I don’t know. But no matter what officials might think, as Wuhan residents locked in our homes for more than two months, as witnesses to the tragic times of this city, we have a responsibility and duty to seek justice for those who died wrongfully.

If anyone imagines that I’ll lightly set aside my pen, that will never happen. One word after another, I will inscribe them onto history’s pillar of infamy.