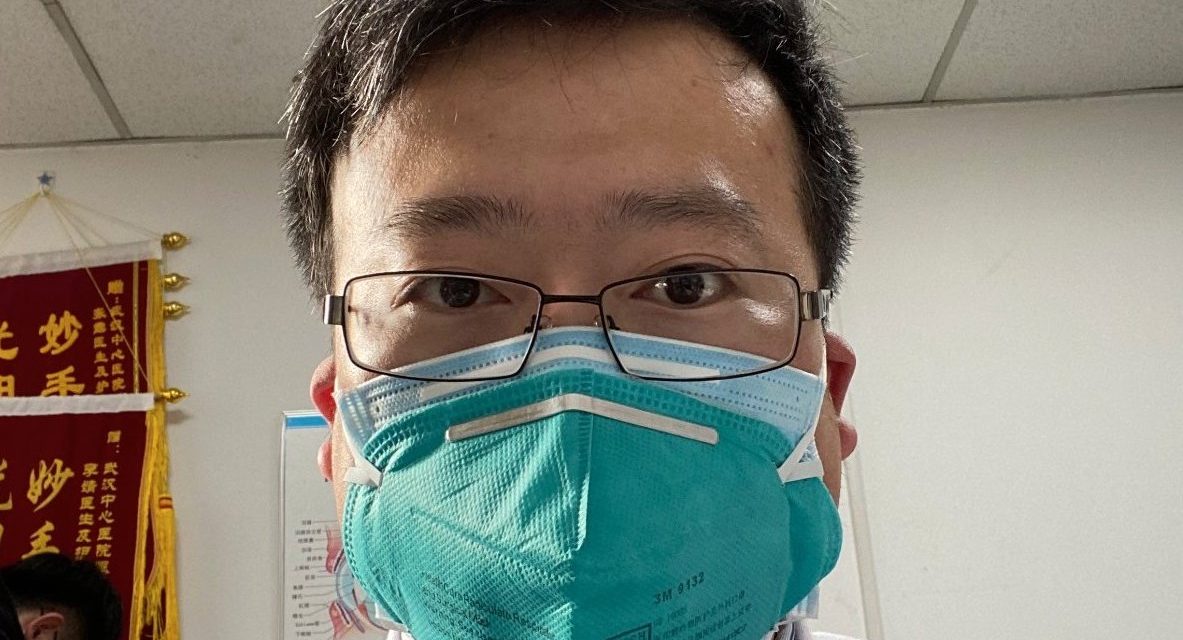 Dated January 3, 2020, this letter of reprimand signed by Li Wenliang acknowledges to Wuhan police that his sharing of information through WeChat on December 30, 2019, about a SARS-like illness originating at the Huanan Wholesale Seafood Market in Wuhan was “illegal.”

China’s anti-corruption agency has announced the results of its investigation into the summoning and formal reprimand by the Wuhan Public Security Bureau of Li Wenliang, the 34-year-old Wuhan doctor who tried to warn colleagues in December about the deadly coronavirus outbreak in his city. The investigation was a response to Dr. Li’s death from the coronavirus on February 7, which prompted a wave of public anger and turned Li into a symbol for many of personal and professional courage in the face of a callous and unaccountable system.

The message from China’s leadership today: Li Wenliang belongs to the Chinese Communist Party, and any attempt to portray him as a folk hero or oppositional figure is unacceptable.

Dated January 3, 2020, this letter of reprimand signed by Li Wenliang acknowledges to Wuhan police that his sharing of information through WeChat on December 30, 2019, about a SARS-like illness originating at the Huanan Wholesale Seafood Market in Wuhan was “illegal.”

The notice released today by China’s National Supervisory Commission consists almost entirely in a sequential recounting of events already generally known, including Li’s post to WeChat, his questioning by local police at the substation on Zhongnan Road (中南路派出所), and his subsequent contraction of the coronavirus and death.

The notice ends with a brief note about the conduct of police that urges further action at the discretion of local authorities: “Concerning the issuing of an improper letter of reprimand by the Zhongnan Road Substation [of the PSB] and irregular law enforcement procedures, the investigation team has already advised that Wuhan municipal supervisory authorities in Hubei province carry out supervision and correct this matter, urging public security organs to revoke the letter of reprimand and hold the relevant personnel accountable, promptly announcing the results to the public.”

While the release acknowledges here that the actions of local police were “irregular” and “improper,” it avoids addressing this core question further.

Perhaps more significant than the release of the investigation findings is a separate news release from the official Xinhua News Agency that includes a Q&A with the National Supervisory Commission on its findings. That release takes on a far more antagonistic tone, portraying the so-called “Li Wenliang incident” in early February as an attempt by “hostile forces” to undermine the Party’s leadership.

The Q&A release clearly seeks to emphasize Dr. Li’s status as both a member of the Chinese Communist Party and as one among many medical professionals who have sacrificed in the midst of a Party-led effort to control the epidemic. Responding to the question of what “social role” was played by Li Wenliang’s posting of information to colleagues through WeChat in late December, the National Supervisory Commission states:

Colleagues told [the team] that Li Wenliang was a cheerful person who enjoyed helping others, and a member of the Chinese Communist Party. [He was] a responsible and hardworking doctor. He also said while under treatment in the hospital that, “After I recover I want to return quickly to the front lines, continuing to see patients.” [He] demonstrated dedication as a medical professional. In sharing and releasing relevant information, Li Wenliang’s idea was to warn his classmates and colleagues to take preventive measures, and after the information was forwarded, it aroused attention from society and objectively served to promote attention to the epidemic and strengthen prevention and control. On March 4, 2020, the National Health Commission and other departments decided to commend Dr. Li Wenliang as one of a number of advanced individuals (先进个人) in the national health and health system for the prevention and control of the coronavirus epidemic. This is a recognition and affirmation of Dr. Li Wenliang’s work.

After a general statement about the immense sacrifices made by healthcare professionals since the epidemic began, the report notes blandly: “Dr. Li Wenliang is one member of the medical team who fought heroically and made contributions and sacrifices in the epidemic control effort.”

The most important message comes at the end of the Xinhua release:

It should be recognized that certain hostile forces, in order to attack the Chinese Communist Party and the Chinese government, gave Dr. Li Wenliang the label of an anti-system “hero” and “awakener” (觉醒者). This is entirely against the facts. Li Wenliang is a Communist Party member, not a so-called “anti-institutional figure” (反体制人物), and those forces with ulterior motives who wish to fan the fires, deceive people and stir up emotions in society are doomed to fail.

“Hostile forces” is a phrase frequently invoked by the Chinese Communist Party to paint internal social forces, including unwanted criticism of the government, as a plot by often unspecified enemies.

In this case, the act of claiming Li Wenliang as the Party’s own is reminiscent of the leadership’s treatment of the centenary of the birth of pro-reform CCP leader Hu Yaobang (胡耀邦) in 2015, which avoided mention of Hu’s reform credentials. Internal propaganda instructions at the time emphasized the need to stay closely to the notion of “the Party’s Yaobang” (党的耀邦).