Source: SCMP (2/10/20)
A new strain of resistance? How the coronavirus crisis is changing Hong Kong’s protest movement
Hard-core activists back off but contagion helping to maintain momentum of city’s anti-government movement. Mass strikes threat as new unions emerge ready to wreak havoc during this crisis, or the next.
By Natalie Wong and Tony Cheung 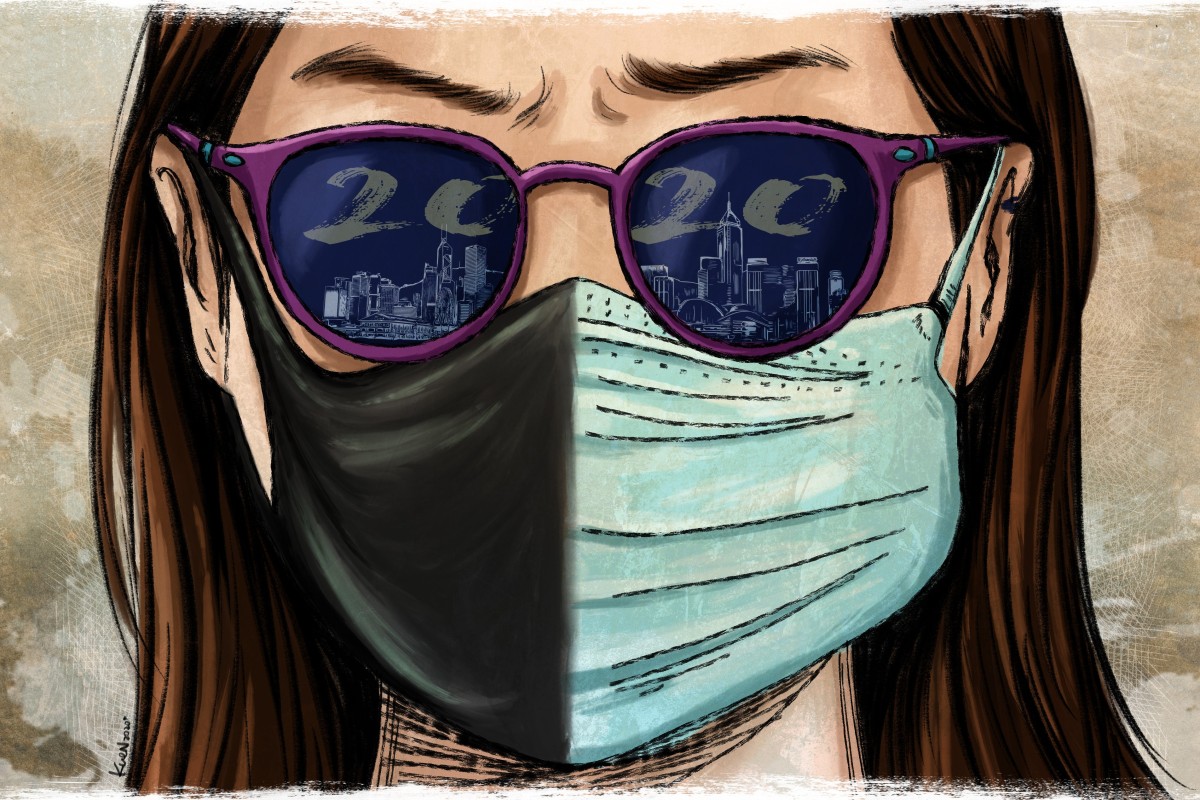 When about 9,000 medical workers went on strike for five days early this month, it signalled not only their dissatisfaction with the Hong Kong government’s handling of the new coronavirus outbreak, but also a change in the city’s protest movement.

After more than eight months of anti-government street marches, violence and vandalism, with riot police responding by firing tear gas and other crowd-dispersal weapons, the health crisis led to protests being called off.

New police tactics since the new year, with officers intervening earlier at demonstrations to end violence and arrest protesters, also had the effect of keeping protesters away. Residents protest against a proposal to use the Heritage Lodge in Lai Chi Kok as a quarantine site. Photo: Felix Wong

But declining crowd sizes at protests were no indication that the social unrest was over, said Eric Lai Yan-ho, deputy convenor of the Civil Human Rights Front that organised seven mass rallies between last June and January 1 this year, including four which it said drew more than a million participants.

“Street protests are just a part of the movement,” he said.

The arrival of the coronavirus crisis provided the anti-government camp with an opportunity to revitalise its resistance, offering a glimpse of the shape of protests to come.

The front joined forces with pro-democracy lawmakers and district councillors to stage a citywide signature campaign slamming the government’s failure to control the spread of the new coronavirus. 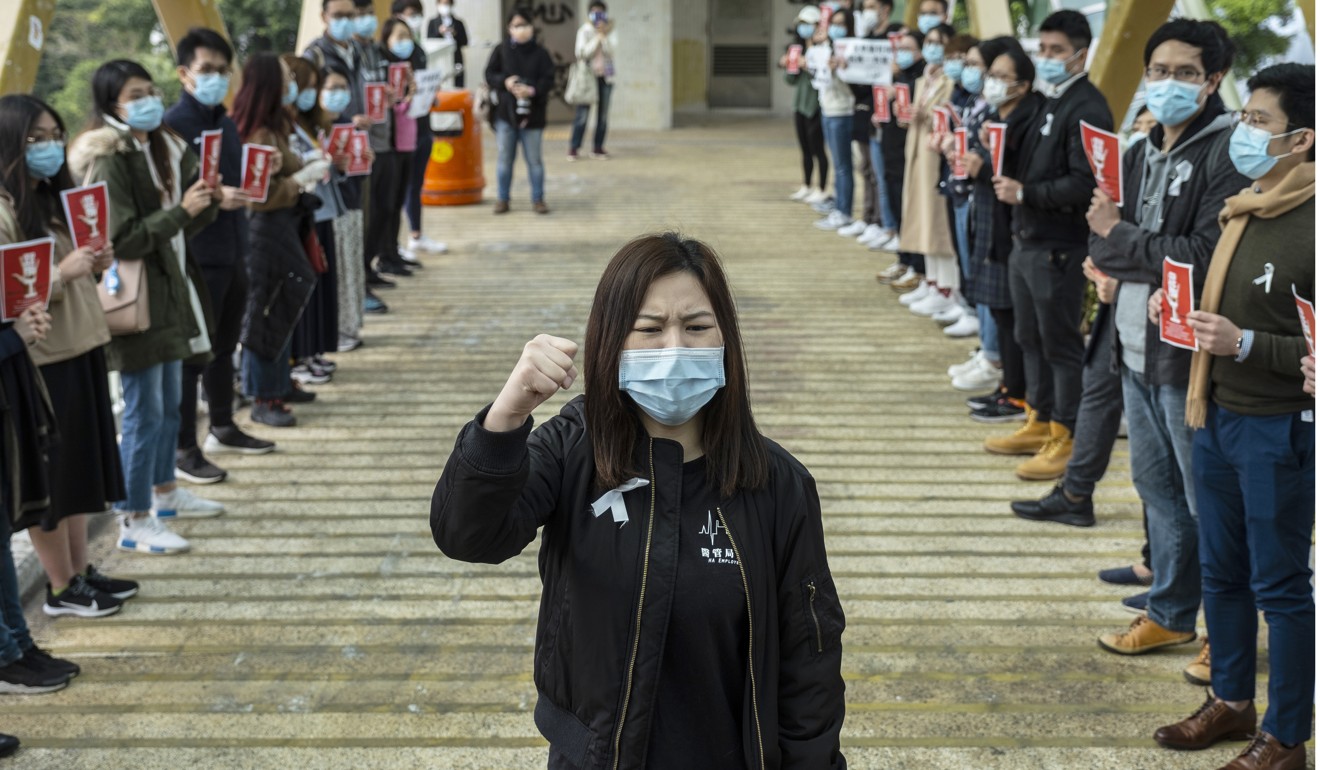 Then came Hong Kong’s largest ever medical workers’ strike, demanding that the city close its borders completely to travellers from the mainland.

It was organised by the new Hospital Authority Employees Alliance, which said its membership soared from 300 in December to more than 18,000 in less than two months of mobilisation.

Its members represent 22.5 per cent of the 80,000-strong workforce in the statutory body that manages all public hospitals and clinics in the city, the second-largest employer after the government.

The medical sector has established unions such as the Hong Kong Public Doctors’ Association and the Association of Hong Kong Nursing Staff, but before the alliance was set up, a large number of health care workers, including allied health workers and clerical support staff, were not unionised.

The alliance is one of several new unions to emerge from the social unrest. The Labour Department confirmed that 27 unions were formed in a month this year as of last Thursday, compared with 23 in the whole of 2019 and 13 in 2018.

Some of the new unions represent workers not previously covered by any registered unions, such as the Bartenders and Mixologists Union, Testing and Certification Union and Event Professionals Union.

Some expect to attract significant numbers because of the size of their employers, including the Union for New Civil Servants, a union for MTR workers called Railway Power, and the Hong Kong Financial Industry Employees General Union.

These were among about 50 new unions and pro-democracy groups who openly supported the medical workers’ strike.

Chris Chan King-chi, associate professor in sociology at Chinese University (CUHK), said the alliance’s high membership and the range of medical workers it represented gave it significant collective power to pressure the government.

A scholar of unionism and former labour organiser, he said previous significant strikes, including one by iron workers in 2007 and another by dock workers in 2013, involved no more than 1,000 union members.

The high number of medical workers who went on strike reflected their unhappiness with the government, as well as a sense of despair accumulated through the months of protests last year, he added.

A survey conducted by the Hong Kong Public Opinion Research Institute in late January showed that 75 per cent of respondents were not satisfied with the government’s response to the virus outbreak and 80 per cent supported a total shutdown of the border to travellers from the mainland.

“The strike, backed by people from all walks of life, has opened new dimensions in the labour movement and has a far-reaching impact for labour resistance in future,” Chan said.

With this, he added, the government and large institutions had been put on notice to expect more long-term and organised forms of confrontation with their workers.

Missing from the front line

Hong Kong’s long season of unrest was triggered by the government’s now-withdrawn extradition bill which would have seen fugitives returned to mainland China as well as other jurisdictions.

Opposition to the bill began as early as last March with peaceful protests, but as Chief Executive Carrie Lam Cheng Yuet-ngor proved determined to push it through, large-scale protests erupted in June.

Although the hugely unpopular bill was finally withdrawn in September, the protest movement morphed into a wider anti-government and anti-mainland campaign, with demands for an inquiry into alleged police brutality, amnesty for protesters who had been arrested, and universal suffrage, among others.

Observers have noted that in the weeks following the sweeping victory of pan-democratic candidates at last November’s district council elections, protest crowds have shrunk, with lunchtime protests attracting mere dozens compared with the hundreds who gathered daily in Central earlier.

Protest fatigue might be one explanation for the smaller crowds, according to political scientist Ma Ngok of CUHK.

But he noted that Hong Kong’s new police chief had changed the way the force responded, especially to violence, and thought this might have discouraged people from joining protests.

“The police strategy now is to make peaceful marchers bear high risks even at police-approved protests,” he said.

When some protesters vandalised a branch of HSBC bank in Wan Chai, police acted swiftly, asking the organisers to end the march. More than 400 people were arrested, the highest number in a single day since June.

Four days later, at a Sheung Shui protest organised by the Democratic Party, about 100 people were detained. Then, on January 19, police halted a gathering at Chater Garden and fired tear gas to disperse the crowds soon after skirmishes broke out between protesters and officers.

As of January 23, police have arrested 7,165 people, and more than 500 have been charged with rioting.

Just a few weeks ago, regular frontline protester Alan (not his real name) was feeling disheartened by the dwindling numbers at anti-government marches.

The 32-year-old freelance cook was masked, dressed in black and wearing a helmet when he took part in the January 1 march which ended with riot police firing tear gas to disperse the crowd in Wan Chai.

He recalled that as he ran down the main street to snuff out tear gas canisters, the sea of protesters clapped and moved aside, creating a path for him.

Then he realised there was no one else in full protest gear confronting police. “People encouraged me to enter the battlefield, but my comrades at the front line were gone,” Alan said.

Morale among his small group of frontline protesters sank to its lowest, he said, and he stopped going to protests.

Since Hong Kong reported its first two cases of coronavirus infection on January 22, many planned gatherings and marches were called off and there have been only a few spontaneous protests and acts of vandalism.

On January 31, Alan returned to the street, and was at the Prince Edward MTR station to mark five months since police officers stormed the station, sparking rumours that three protesters died – an allegation the force and government have strenuously denied.

The crowd was smaller than at past protests but he was struck by the fact that everyone present – demonstrators as well as residents and bystanders – was wearing a surgical mask.

“Previously, we risked arrest for wearing a mask,” he said, referring to last October’s ban on the use of face coverings at protests. “Now, how ridiculous it is that police fear us if we don’t wear a mask and cough at them.”

He never felt safer from the risk of arrest, he said.

‘They will be back’

The question is what happens after the ongoing health crisis ends – will street protests be a thing of the past, or will new forms of anti-government resistance proliferate?

A joint study by scholars from three universities has found that the solidarity between protest radicals remains strong enough to keep the movement going, at least for the foreseeable future.

Cheng said that since early November, the number of posts on LIHKG Forum, a Reddit-like platform protesters used to discuss plans and pro-democracy events, fell significantly compared with June last year. Big data analysts had earlier also reported a sharp decline in protest-related online activities over the past two months.

He said protesters now tended to coordinate among themselves through private channels and chat groups, such as the encrypted messaging application Telegram and Firechat, which ensure confidentiality.

The study also showed that unlike 2014’s Occupy movement, which ended with deep divisions between protesters, a large number of peaceful demonstrators remained firmly behind the radicals in the current protests.

The scholars’ analysis of 18,000 questionnaires collected at protest sites from June to early January showed a high level of solidarity among protesters, with respondents strongly agreeing that “the peaceful faction and militant faction are in the same boat” and that “it is understandable for protesters to take radical action when the government acts in disregard of people’s opinions”.

Cheng warned that a political powder keg would remain in Hong Kong society if root problems remained unsolved and the anger of the people lingered.

“They will be back on the streets again. It need not be related to police brutality, the extradition bill or virus control measures, but any controversial policy might spark a public outcry,” he said, noting that city leader Carrie Lam’s support rating has plummeted from 64 points when she took office in 2017 to just 21 points in mid January – the lowest score for any chief executive.

University of Hong Kong social sciences professor Paul Yip Siu-fai said the government’s failure to grasp a golden opportunity to rebuild trust with the people during the virus crisis had instead helped the protest movement.

“The government’s recent performance has accelerated the pro-democracy campaign to progress to a new stage – from street protests to everyday protests,” he said.

The pro-democracy camp is already mobilising eligible voters to register for the Legislative Council elections in September.

“If police further escalate their use of force against protesters, resistance by people from all walks of life will persist in more diversified forms and the pro-Beijing camp may suffer another defeat in the coming elections for the legislature,” he said.

Lau, who is vice-chairman of the Chinese Association of Hong Kong and Macau Studies, is also sceptical over the virus crisis boosting the anti-government movement.

“The opposition continues to create issues in the health crisis to spread anti-mainland sentiments, but this tactic cannot be sustained in the long run,” he said. “People will eventually know who sacrificed professionalism in the medical workers’ strike for political goals.”

Protester Alan, for one, is not ready to give up the fight.

“Retreating from street battles doesn’t mean withdrawing from the war,” he said, adding that the protest mantra “Be water” was not merely a call to hit and run.

“We know it’s a long fight. It’s about flexibility and adaptability. We’ll observe, reform and fight back until the government heeds our demands,” he said.