Source: Global Times (12/22/19)
Exhibition on ‘Dream of the Red Chamber’ kicks off in Beijing 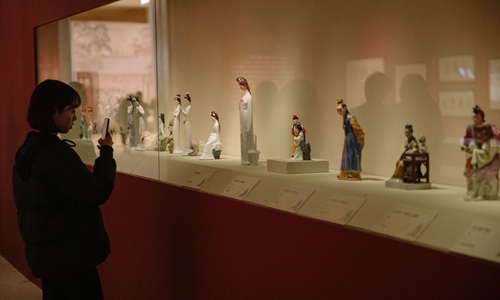 A visitor explores the Cultural Exhibition of Dream of the Red Chamber at the National Museum of China in Beijing on Friday. Photo: Li Hao/GT

Some have described it as the Chinese Gone with the Wind, while others have called it China’s answer to War and Peace. No matter how it is described, Dream of the Red Chamber is unanimously regarded as one of the four great classic novels of Chinese literature.

Nearly 600 related items are currently on display at the National Museum of China (NMC) to showcase the charm of this beloved classic.

A look through history

First published in 1791, Qing Dynasty (1644-1911) writer Cao Xueqin’s Dream of the Red Chamber depicts the decline of an aristocratic family.

“This is a world-class classic that deserves timeless reflection and appreciation,” said Hu Deping, director of The Cao Xueqin Society, at the opening ceremony of the exhibition on Friday.

The three-month-long Cultural Exhibition of Dream of the Red Chamber is the largest-scale exhibition on the book ever held at the museum so far. Through various items such as paintings, different editions and translated versions of the book, the exhibition introduces how the book came about, its significant status in Chinese culture and its far-reaching influence around the world.

The exhibition includes some highly valuable pieces such as a handwritten copy of the novel by Feng Qiyong, a renowned Chinese scholar famous for his contributions to Redology, the study of Dream of the Red Chamber.

Additionally, the painting Daguanyuan is also on display. One of the NMC’s most valuable collections, this is the first time the painting has been put on public display.

Daguanyuan, which literally means grand view garden, is the large landscaped garden built within Rongguofu, the mansion that belonged to one of the aristocratic families in the book, and is a key setting for much of the book.

The work of an anonymous Qing Dynasty painter, the painting features 173 figures and is regarded as a valuable reference for the study of the classic work.

A taste of history

In addition to learning more about the stories in the literary classic through the hundreds of items on display, visitors can also try Dream of the Red Chamber desserts at the NMC cafe.

Inspired by eight main female characters, the desserts are shaped after different flowers and come in flavors such as date, chestnut, passion fruit and oolong tea. In Chinese these types of desserts are known as tang guozi.

“Tang guozi are not mooncakes, although they look similar,” Liao Fei, director of the NMC gastronomy center, told media at a press conference on December 12, noting that the museum hopes to bring back the skills and tradition of such baked goods by including it in the exhibition.

“Tang guozi is a traditional dessert paired with tea. It originated from the Tang Dynasty (618-907), thrived during the Song Dynasty (960-1279) and was later introduced to Japan,” said Liao.

The Los Angeles Times describes Dream of the Red Chamber as “an artfully nuanced look at domestic life in 18th century China, placed within a philosophical and spiritual context of Buddhism, Confucianism and Taoism.”

The intricacy of the masterpiece has drawn artists from different countries to interpret the work in various ways.

For instance, Argentinean artist Leandro Erlich held an exhibition titled The Confines of the Great Void in July at the The Central Academy of Fine Arts Art Museum in Beijing. The title was inspired by a chapter from the book.

“He was intrigued by the book, as many stories and traditional Chinese moral concepts from it were rather refreshing and foreign to Westerners like him,” said Zhang Zikang, curator of the museum.

However, the length of the book and the staggering number of difficult Chinese names can make it hard for non-Chinese readers to follow. The English versions published by Penguin Books during the 1970s and 1980s, boast 2,500 pages – twice as long as War and Peace.

With this in mind, the exhibition is the perfect opportunity for foreign visitors in the capital who do not have time to read it in its entirety to get a better understanding of this classic work.