Source: NYT (1/8/20)
At ‘Sacred’ Lake, Chinese Declare Love for Xi and Communist Party
Some come to seek an emotional lift, others to sing patriotic tunes. But they all raise a fist and say an oath, a rite meant to show China’s strength in the 21st century.
By Javier Hernandez 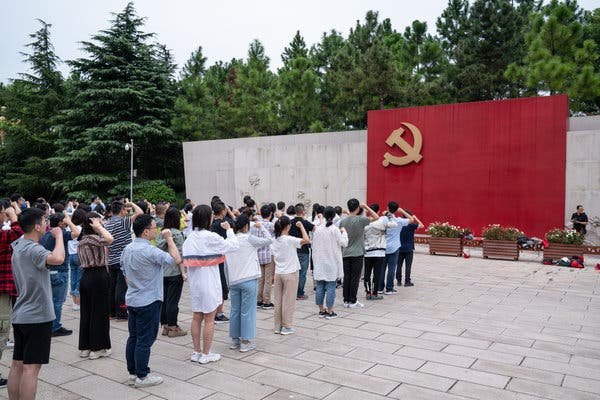 NANHU LAKE, China — He was anxious about China’s trade war with the United States. He was worried about the rise of pro-democracy activists in Hong Kong. So Liu Yuanrong, a lifelong member of the Chinese Communist Party, followed the advice of a friend: Go to the lake.

That would be Nanhu Lake, a cradle of Chinese communism in eastern China that in recent years has become a spiritual retreat for the party’s more than 90 million members.

There, near a forest of pine trees one recent day, Mr. Liu straightened his back, furrowed his brow and threw his fist triumphantly into the air.

“I vow to devote my life to defending communism,” said Mr. Liu, a 57-year-old electronics trader from southern China, reciting a party oath. “I vow to sacrifice everything for the party.”

Nanhu Lake, which played host to the Chinese Communist Party’s first congress nearly a century ago, has long been a staple of communist lore.

In the strongman era of President Xi Jinping, the lake has gained new prominence as a place for throngs of patriotic tourists — students, hospital workers and technology entrepreneurs among them — to declare their love for the party and Mr. Xi.

Thousands of people come to Nanhu Lake and its museum, Nanhu Revolutionary Memorial Hall, each day, according to a report from China’s news agency, a testament to swelling nationalism in China under Mr. Xi, whose visit to the lake two years ago inspired a wave of tourism. Last year, the lake had over a million visitors.

“We think this place is sacred,” said Yang Jinping, a stay-at-home mother. 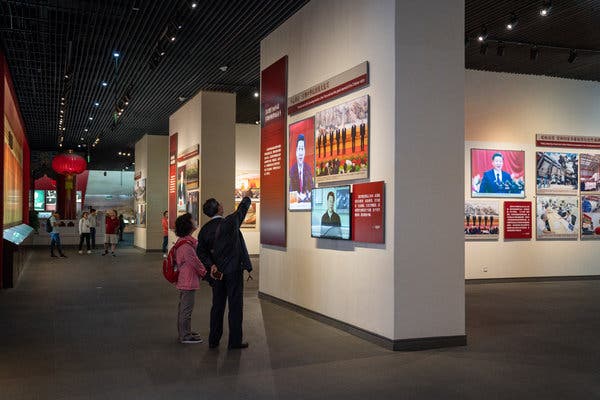 Visitors looking at an exhibition on Xi Jinping at the museum. Credit…Yan Cong for The New York Times

As China grapples with ongoing trade tensions with the United States and a slowing economy, many come to the lake in search of an emotional lift. They sing patriotic songs, recite Mr. Xi’s slogans about the “Chinese dream” and reminisce about revolutionary heroes.

“We want to show our gratitude to the party,” Mr. Liu said, “and to remember that China can only be strong with a strong party.”

The experience of the visit culminates at a 161-foot-long wall emblazoned with the party’s hammer-and-sickle flag, where visitors clench their fists and recite an oath of loyalty to the party, a communist ritual that has come back into fashion under Mr. Xi, who also serves as the party’s chairman.

In 1921, Mao Zedong and a small group of revolutionaries held the party’s first congress on a boat in the middle of the lake, after the police chased them out of Shanghai, about 60 miles northeast. Across China, the so-called “red boat” is well known.

At the museum at the lake, which started construction when Mr. Xi was the top party official here in Zhejiang Province, a selective retelling of party history is on display.

Inside, there are exhibitions about China’s “century of national humiliation” at the hands of foreign powers, the spread of Marxism in China and Mao’s founding of the People’s Republic in 1949.

A glittering display on the top floor is devoted to Mr. Xi, China’s most influential leader since Mao. His speeches play on loop and his slogans are plastered across the walls, including one that says, “Lead the great renewal of the Chinese nation.”

A gift shop sells Communist Party pins, commemorative coins and certificates of party membership. But the most prized souvenir is a photo by the so-called oath wall outside. 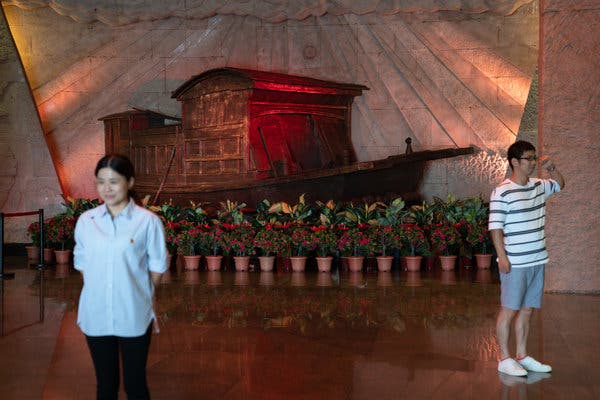 Taking photos by a model of the boat on which the first National Congress of the Chinese Communist Party was held. Credit…Yan Cong for The New York Times

Mr. Xi, who rose to power in 2012, has led a renewed interest in party history and a revival of its traditions, including the oath, part of his efforts to extend the party’s domination over daily life in China. Critics say Mr. Xi is bringing China back to the days of one-man rule and fueling a personality cult.

During a tour of revolutionary sites in 2017, Mr. Xi and the other six members of the Politburo Standing Committee, China’s highest decision-making body, visited a Shanghai memorial, where Mr. Xi led a recitation of a party oath before a giant flag. The Politburo members, standing solemnly, raised their fists in unison.

Then the leaders went to Nanhu Lake, where they visited a replica of the boat where Mao and the other founders of the party held their meeting. Mr. Xi, speaking after the visit, described the lake as one of the places where “the Chinese Communist Party’s dream set sail.”

“Our party was born here, our journey began here and our rule of the country all dates back to here,” Mr. Xi said.

Oath-taking ceremonies are now a popular activity for party members across the country. The ritual is performed outside cemeteries for revolutionary heroes, atop mountains once crossed by the Red Army and at schools that train party officials.

Most people recite the standard party oath, although there are also special versions for those serving in the military or members of the Communist Youth League.

Visitors to Nanhu Lake say that the gesture of the raised fist, long associated with leftist causes, conveys a sense of resilience and grit and is well suited to China’s rise as a superpower. They describe the ritual as a source of hope at a time when China is facing a series of challenges.

“It gives people strength,” said Li Donghao, a 22-year-old railway employee who was taking part in a patriotic education tour organized by his employer, a state-owned firm. He and a small group of colleagues, dressed in matching white shirts with red party pins, unfurled a red flag before the wall and said an oath. 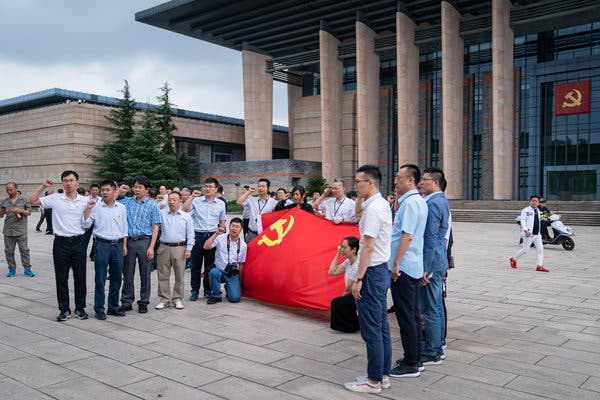 Posing with the Chinese Communist Party flag outside the museum. Credit…Yan Cong for The New York Times

Later, Mr. Li wrote a 1,400-character report about his trip for his bosses, saying it had taught him the true meaning of “red boat spirit,” a term used by Mr. Xi and other party leaders to encourage the masses to emulate the drive of the party’s founders.

Many visitors to the lake embrace the kind of uncompromising nationalism that Mr. Xi has promoted. They see the antigovernment protesters in Hong Kong as rioters; they fervently support China’s military buildup in the South China Sea; they believe the United States is trying to contain China’s rise.

At the lake, they find kindred spirits to chat about politics and to map out how China will win the trade war.

“We will surpass the United States,” said Jin Tianshao, 62, a retired teacher who sat outside the museum. “It’s not good to argue like this.”

For many visitors, Mr. Xi is the main draw.

Liu Yunlai, a 20-year-old university student, recently led two friends on a tour of museum and the oath wall, stopping to try on virtual reality glasses that showed the inside of the boats used during the 1921 party meeting. It was Mr. Liu’s second visit in the span of a few weeks, because, he said, he wanted to retrace Mr. Xi’s footsteps.

“I’m attracted by the spirit of the communists,” he added. “It’s like a faith. Others believe in Buddhism or Taoism. We believe in communism.”