Source: NYT (12/31/19)
Chinese Scientist Is Accused of Smuggling Lab Samples, Amid Crackdown on Research Theft
Zaosong Zheng, a promising cancer researcher, confessed that he had planned to take the stolen samples to Sun Yat-sen Memorial Hospital, and publish the results under his own name.
By Ellen Barry 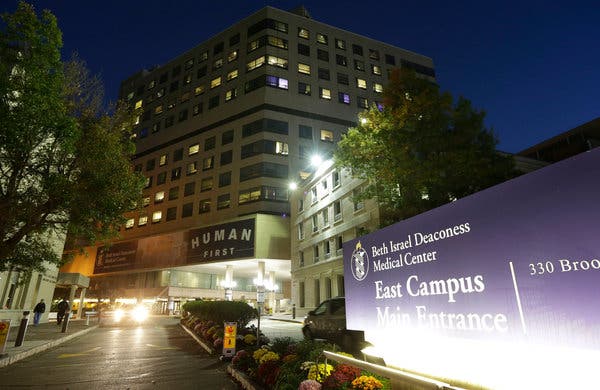 An entrance to Beth Israel Deaconess Medical Center, in Boston, in 2014. Zaosong Zheng was a cancer researcher there recently. Credit…Steven Senne/Associated Press

BOSTON — Zaosong Zheng was preparing to board Hainan Airlines Flight 482, nonstop from Boston to Beijing, when customs officers pulled him aside.

Inside his checked luggage, wrapped in a plastic bag and then inserted into a sock, the officers found what they were looking for: 21 vials of brown liquid — cancer cells — that the authorities say Mr. Zheng, 29, a cancer researcher, took from a laboratory at Beth Israel Deaconess Medical Center.

Under questioning, court documents say, Mr. Zheng acknowledged that he had stolen eight of the samples and had replicated 11 more based on a colleague’s research. When he returned to China, he said, he would take the samples to Sun Yat-sen Memorial Hospital and turbocharge his career by publishing the results in China, under his own name.

Mr. Zheng’s arrest on Dec. 10 signified an escalation in the F.B.I.’s efforts to root out scientists who, the authorities say, are stealing research from American laboratories. Federal prosecutors warn that he may be charged with transporting stolen goods or with the theft of trade secrets, a felony that brings a prison term of up to 10 years.

At a hearing on Monday, Magistrate Judge David Hennessy granted prosecutors’ wish to hold Mr. Zheng without bail, noting that the theft appeared to have the support of the Chinese government. Two other Chinese scientists who worked in the same lab as Mr. Zheng had successfully smuggled stolen biological material out of the country, prosecutors say.

Mr. Zheng’s case is the first to unfold in the laboratories clustered around Harvard University, but it is not likely to be the last. Federal officials are investigating hundreds of cases involving the potential theft of intellectual property by visiting scientists, nearly all of them Chinese nationals.

Christopher Wray, director of the F.B.I., described the researchers as “nontraditional collectors” of intelligence acting at the behest of the Chinese government, part of a collective effort to “steal their way up the economic ladder at our expense.”

“This is one of the few cases where there’s been stealing of physical material as well as the stealing of ideas,” he said. “It’s an escalation over most of what we’ve been seeing.”

Researchers of Chinese descent make up nearly half of the work force in American research laboratories, in part because American-born scientists are drawn to the private sector and less interested in academic careers, Dr. McKinney said. Among the 6,000 Chinese scientists who have received grants from the National Institutes of Health, around 180 are under investigation for possible violation of intellectual property law, he said.

Harvard University had sponsored Mr. Zheng’s visa starting on Sept. 4, 2018, according to Jason A. Newton, a spokesman for the university. The visa support ended when Mr. Zheng lost his job at Beth Israel Deaconess Medical Center, he said.

The hospital said in a statement that it was cooperating with the investigation. “Any efforts to compromise research undermine the hard work of our faculty and staff to advance patient care,” said Jennifer Kritz, the hospital’s director of communication.

A message left for Brendan O. Kelley, Mr. Zheng’s lawyer, was not returned.

Court records sketch out a cat-and-mouse game between Mr. Zheng and Kara Spice, the F.B.I. special agent assigned to the case. Customs and Border Protection agents had been warned that he was “a high risk for possibly exporting biological undeclared biological material,” and inspected his luggage in the airline’s bag room.

At first, Mr. Zheng deflected their interest in the 21 vials, telling the agents that they “were not important and had nothing to do with his research.” Then he offered another explanation, saying that they had been given to him by a friend and that he had no plans to do anything with them.

“Zheng could not explain why he was attempting to leave the United States with the vials concealed in a sock in his checked bag,” Ms. Spice’s statement says. Shortly thereafter, he confessed to stealing the material.

Mr. Zheng booked another flight to China the following day, but was detained by F.B.I. agents before he could board it, court documents say. Through a Mandarin interpreter, he waived his Miranda rights and told the agents he intended to use the samples for cancer research. At that point, he was arrested.

Agents learned more when they visited Mr. Zheng’s apartment, according to court documents. His former roommate, a fellow medical researcher named Jialin Li, told them that Mr. Zheng had packed all his possessions in preparation for his Dec. 9 flight, suggesting that he did not intend to return to the United States.

Mr. Li also told them that two other Chinese researchers, Lei Liu and Leina Mo, who had worked in the same laboratory at Beth Israel Deaconess Medical Center, had managed to smuggle biological material into China without getting caught, according to court documents.

Mr. Zheng’s theft “was not an isolated incident,” prosecutors stated in the motion to hold him without bail. “Rather, it appears to have been a coordinated crime, with likely involvement by the Chinese government, as two other Chinese nationals working in the same lab have also stolen biological materials and smuggled them out of the United States.”