Source: NYT (12/6/19)
Claims of China’s Meddling Roil Taiwan Ahead of Elections
A would-be Chinese defector named two Hong Kong executives as acting as a front for Chinese intelligence agencies. The authorities in Taiwan had started tracking them in 2016.
By Steven Lee Myers and Chris Horton 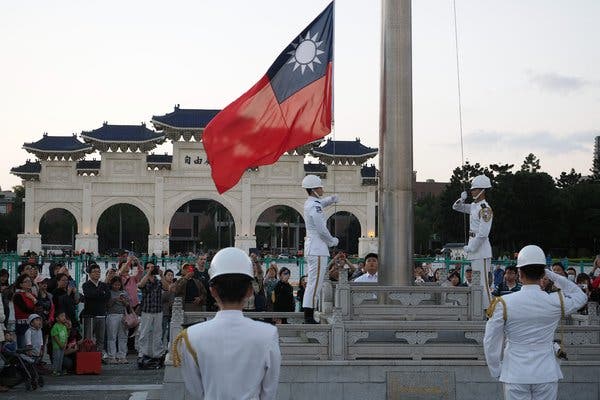 Soldiers at a flag-lowering ceremony at Liberty Square in Taipei, Taiwan’s capital, last month. The self-governing island will vote for a new president in January. Credit…Henry Lin/EPA, via Shutterstock

TAIPEI, Taiwan — In December 2016, Xiang Xin, a businessman based in Hong Kong, and his wife asked the government in Taiwan for permission to invest in real estate, as foreigners must do. After a four-month investigation, officials rejected their application.

“Their relationship with China’s People’s Liberation Army was extraordinarily close,” Chang Ming-pin, executive secretary of the commission at Taiwan’s Ministry of Economic Affairs that reviews foreign investments, said in an interview. “That complicated things.”

Now Mr. Xiang’s name has surfaced again in a possibly related intrigue. Last month, he was identified at the center of an extraordinary — if still largely unverified — tale of covert operations by China’s military intelligence agencies to undermine democracy in Taiwan.

A man claiming to work for a company owned by Mr. Xiang, Wang Liqiang, told the authorities in Australia in a 17-page appeal for political asylum that the couple served as a front for China’s covert efforts to manipulate the outcome of elections in Taiwan. He detailed a multipronged effort to finance pro-Beijing candidates, buy off voters and sow disinformation on television channels and on the internet.

The effort, Mr. Wang said, has intensified ahead of a presidential vote, scheduled for Jan. 11, that has taken shape as a stark choice between a closer relationship with China or a more forceful assertion of the island’s status as a self-governed democracy. 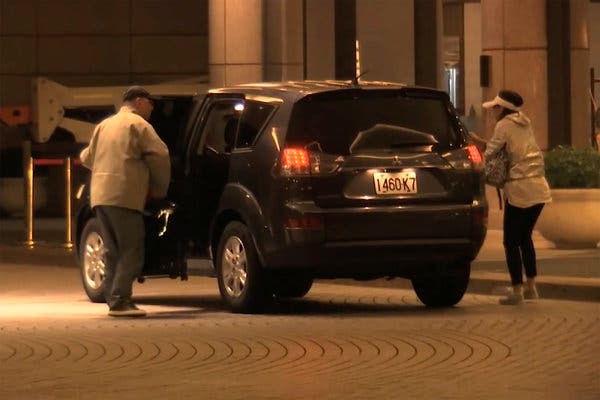 The allegations have punctuated longstanding fears of Chinese interference in Taiwan, which Beijing claims as an inviolable part of a greater China. China’s leader, Xi Jinping, has made no secret of the country’s ambitions to absorb Taiwan, warning this year that he would use force, if necessary, to prevent any move to formal independence.

Intelligence officials in Australia and the United States are now reviewing Mr. Wang’s claims, which have set off a new criminal inquiry in Taiwan into the couple’s activities.

Wang Ting-yu, the chairman of the Foreign Affairs and National Defense Committee of Taiwan’s legislature, said in an interview that the couple’s investment application in 2016 had raised a red flag for investigators, who began looking into their links to the Chinese military and defense companies. Since then, counterintelligence officials have tracked the couple’s visits to the island. They came as often as once a month, he said.

“We know their background, and they’re on a list,” he said. “Watching people like this developing their network is a traditional method for investigating this kind of case.”

Since the would-be defector Wang Liqiang’s claims surfaced in Australia, which is having its own debate about the extent of Chinese influence there, some analysts have raised doubts about the scope or significance of his possible role as an intelligence operative, citing his age and his background as a painter. China has said he is a convicted fraud.

But some of the allegations he detailed are at least plausible, according to officials and lawmakers in Taiwan, especially given China’s long history of trying to win hearts and minds on the island through investments and cultural exchanges, as well as through coercive and covert means. They include what appeared to be efforts by Mr. Xiang and his wife to invest in businesses in Taiwan despite their investment application being rejected in 2017.

The most fiercely disputed of Mr. Wang’s claims was that Mr. Xiang’s company helped funnel political donations to Han Kuo-yu, a populist who was unexpectedly elected mayor of a southern port city, Kaohsiung, in an election last year. A maverick within the main opposition party, the Kuomintang, Mr. Han is now challenging Taiwan’s incumbent president, Tsai Ing-wen.

Mr. Han has promised to improve relations with China, which is Taiwan’s biggest trading partner, and as mayor has traveled to Shenzhen, the southern Chinese technology hub, to drum up business and meet Beijing’s official in charge of Taiwan affairs. Mr. Han and his campaign aides have denied receiving any donations from China.

To critics, the allegations of China’s interference on Mr. Han’s behalf underline his coziness with the Communist Party in Beijing, which routinely denounces Ms. Tsai and her party, the Democratic Progressive Party. 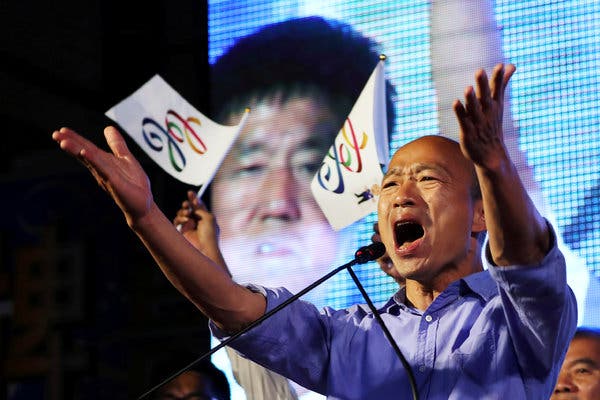 On the campaign trail, Ms. Tsai and other party candidates have denounced China’s interference and warned that under China’s terms for unification, Taiwan could end up like Hong Kong. There, protesters have for months been pushing back against Beijing’s efforts to chip away at the semiautonomous Chinese territory’s unique social and political freedoms.

“With Taiwan’s ballots we want to tell the world that we don’t want to be like Hong Kong,” Taiwan’s premier under Ms. Tsai, Su Tseng-chang, said at a campaign rally in New Taipei City this week. He warned that China’s terms for unification would mean surrendering Taiwan’s sovereignty.

“We want to be the masters of our own country,” he thundered, drawing rousing cheers from a crowd of several thousand Tsai supporters.

Mr. Xiang and his wife, who were in Taiwan when the appeal leaked, were detained by the authorities at the main international airport on Nov. 24 and ordered not to leave the island. It is not clear if they are cooperating with investigators. They could not be reached for comment.

Mr. Xiang, 54, is the owner or top director at more than a dozen different companies in Hong Kong. One of them cited in the would-be defector’s appeal, China Innovation Investment Limited, focuses on both private and public investments in military related to the “integration of military and civil sectors” including military joint ventures, according to company documents. 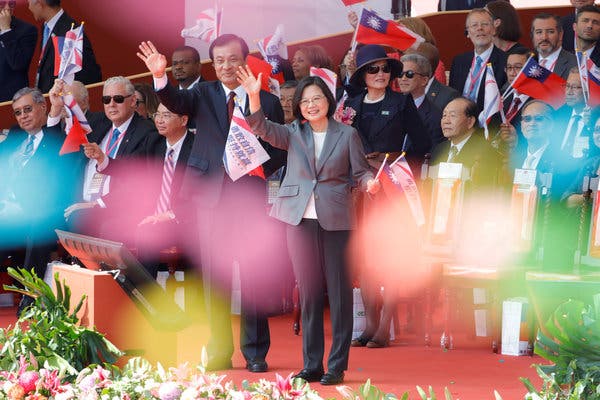 Taiwan’s president, Ms. Tsai, during National Day in Taipei in October. She rejects China’s claim that Taiwan is part of its territory. Credit…Eason Lam/Reuters

The company issued a statement denying the accusations raised in the asylum appeal. Mr. Xiang, in an email, claimed he did not know the would-be defector. But Wang Ting-yu, the lawmaker in Taiwan, said that investigators in fact had a photograph of the couple with their employee, Wang Liqiang, undercutting that denial. Taiwan’s investigative bureau declined to comment on the case.

Since the accusations emerged, the company, which is listed on the Hong Kong Stock Exchange but incorporated in the Cayman Islands, stopped responding to requests for comment as new details emerged. The company’s two independent directors resigned, according to a shareholder notice issued on Nov. 27.

Another company cited in the allegations is China Trends Holdings, which in 2010 signed a memorandum of understanding with a major Chinese defense manufacturer, China North Industries Group Corporation, or Norinco, Reuters reported last month.

The biography of Mr. Xiang’s wife, Gong Qing, includes positions at two institutions linked to the Communist government, including the National Scientific and Technology Information Center, a military intelligence organization that is part of the People’s Liberation Army.

Mr. Xiang and Ms. Gong, whose surname is also rendered as Kung, appear to have invested in real estate as well, despite having been denied approval for an investment in business. They might have done so using other names or proxies, according to officials and news reports. Business Today, a Taiwanese publication, reported last week that Ms. Gong bought three luxury apartments in Taipei’s Xinyi District, one for $2.6 million in February 2017 and two neighboring apartments for $6.6 million in July that same year.

A spokesman for one of the channels, CTi, said the accusations that the company received payments from China were absurd.

In his account, Mr. Wang said he had been assigned by Mr. Xiang and his wife to travel to Taiwan with a false passport to help “to manage the information on media and internet in Taiwan that are under their control.” His misgiving about the assignment, he claimed, prompted him to flee to Australia, where his wife had previously traveled with their child to study.

“The purpose of such actions was to make Taiwan lose its sovereignty,” he said, adding that if China succeeded in ruling the island, “Taiwan will eternally lose democracy.”