Source: SCMP (11/29/19)
Blue-collar photographer’s slice-of-life photos aboard China’s slow trains capture a side of country forgotten amid the fanfare over high-speed progress
China’s high-speed trains are a gleaming testament to its rise, but in the shadows is another world, one documented by a hotel worker with a second-hand Nikon. Qian Haifeng set out to see country on the cheap, and began photographing his fellow passengers. His images have won him national and international recognition
By Thomas Bird 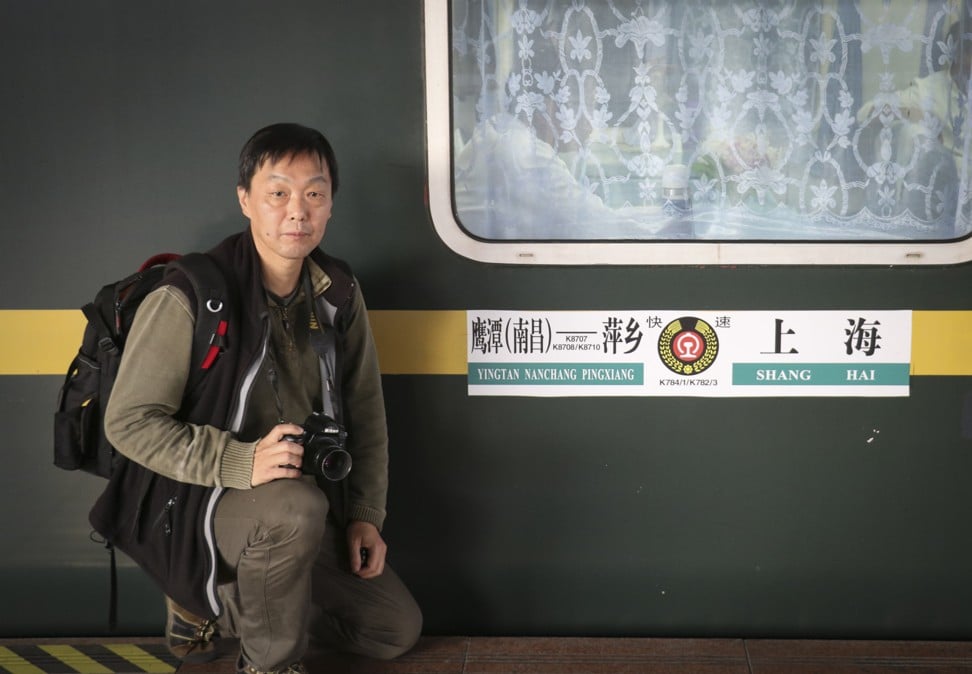 Edging the banks of mighty Lake Tai and bisected by the fabled Grand Canal, Wuxi in eastern China has been a favoured place of trade since antiquity. Wedged between economic heavyweights Suzhou and Changzhou in Jiangsu province, the manu­facturing hub has awoken from its post-socialist slumber and is now known more for software and solar panels than silk and rice.

The Wuxi Grand Hotel looms large over the city’s Binhu district, where, in a 20th-floor Japanese restaurant, appears the hotel’s long-serving electrician, Qian Haifeng. The 52-year-old is sporting brown worker over­­alls and big black boots. He is a little hard of hearing but a boyish energy projects the character of someone much younger.

“Sorry to bring you all the way up here,” Qian says in Mandarin lilted with the local Jiangnan dialect. “I usually eat in cheap noodle shops on the street but I’m not allowed to leave the hotel while on duty. At least up here you get a good view of Wuxi.”

He is right, and through the smog appear relics of several epochs: the Grand Canal, completed in the early seventh century, during the Sui dynasty; some soon-to-be-demolished Mao-era tenement blocks; and in distant Nanchang district, the glass totems of China’s economic rise, dominated by the Hyatt Regency hotel.

“The Grand Hotel was the tallest building in Wuxi when I came to work here in 1988,” says Qian. “It was a prestigi­ous place to work in the 1990s. I was trained on the job and my salary was 1,000 yuan when the average was just 400. In 1995, my daughter was born and I was rich enough to buy a camera, so I could photograph her growing up.”

The good times were not to last, however. In 2001, aged just 34, Qian was diagnosed with cancer of the nose and throat: “I had to undergo serious treatment and then, year after year, go back to the hospital for check-ups. I didn’t get the all-clear until 2006, and to this day, if I eat spicy food I have trouble swallowing.” As if to prove his point he period­i­cally rubs his nose with a serviette and coughs lightly.

The Wuxi Grand, Qian says, had been the first hotel in the city to accommodate foreigners, and had been granted a special licence to receive foreign television channels, such as the BBC, CNN and NHK. “I used to watch Japanese and British documentaries, so I had a good idea of the world. I wanted to go backpacking though I didn’t have much money. My salary had plateaued at 2,000 yuan a month and medical bills had been costly. So I decided to ride trains in third-class carriages and visit small, unknown places that haven’t been opened up to tourism.”

Qian says he only has to fulfil a quota of hours each month at the hotel. If he works several double shifts in a row, beginning in the early morning and finishing late at night, he can free up days or even weeks to go travelling: “I’d go anywhere. I’d sleep in youth hostels and on people’s sofas. The cheapest place I ever stayed was in Inner Mongolia, it cost five yuan a night.”

And he still had his camera.

In 2008, already an expert navigator of budget rail travel, Qian was struck with an epiphany when he saw Wang Fuchun’s famous photo series “Chinese on the Train” online: “This changed my whole approach. I thought to myself, ‘I can do that.’ I’d only photographed birds and mundane things before, then I remembered the documentaries I liked to watch in the hotel. They all told human stories.”

This was the same year China introduced its first high-speed railway service from Beijing to Tianjin, ushering in an era that Wang would go on to document.

“I went in the other direction,” says Qian, “treading the opposite path from the way the nation was supposedly heading, on the slow, obscure services, the cheap old trains without air conditioners – the ‘green trains’.”

Though Qian says his photography was initially intended to document his nomadism for his own pleasure, when he posted some images on local website Wuxi Citizen Journalism, his intimate, sympathetic portrayal of China’s poor migrant classes caught the eye of Tang Haowu, a Wuxi-born photographer. Tang “was well-known and had already had exhibitions overseas. He saw my work and recommend­ed me to Bao Kun [a prominent Beijing-based art critic and curator, who] was impressed and decided to exhibit my work at Lianzhou [one of China’s most prestigious contem­porary photography festivals, held each year in Guangdong province] in 2015. That year I won the [Punctum] grand prize”, says Qian. 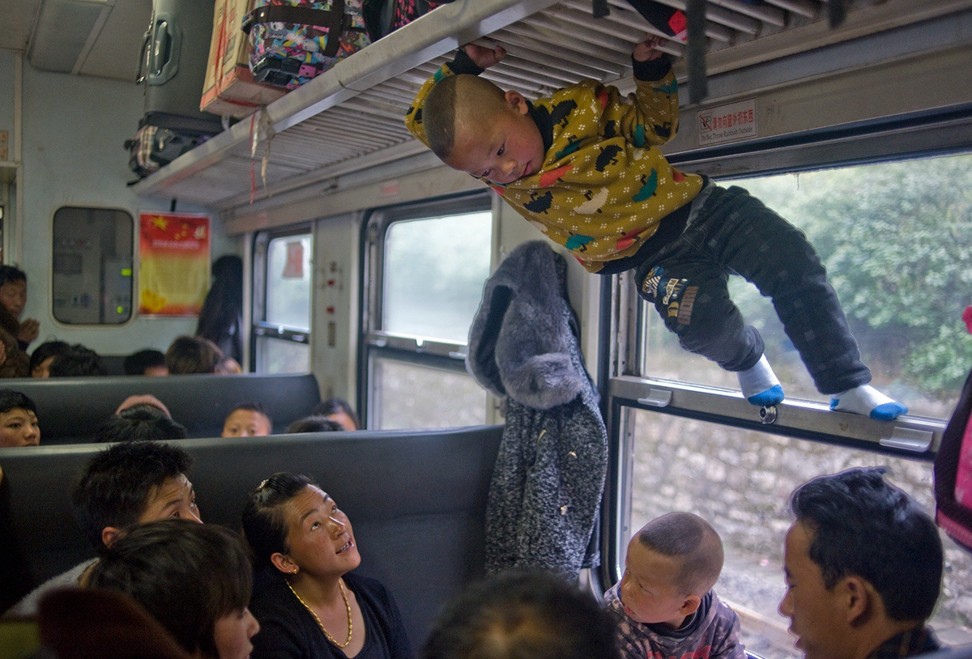 Train No 5620, from Puxiong to Chengdu, in Sichuan province, in February 2013. Photo: Qian Haifeng

The photography world was shocked at the creative depths exhibited by this blue-collar worker hailing from a city best known for manufacturing bike parts.

“Qian wasn’t part of any art circle, he did his photo­graphy for photography’s sake, because he liked trains and was interested in people,” says Bao, on the phone from Beijing. “He came across as a common, low-salary worker yet his images captured a realistic, serious and neglected side of China in an insightful way.

“The country was under­going a serious transformation at the time, and government posters were full of aeroplanes, high-speed trains and other icons of growth. Nobody really noticed the old green trains that freight the poor from first-tier cities to the countryside and back again. Many of the top photographers neglected the railway, believing Wang Fuchun had already done it all.”

Though high-speed trains connect Wuxi with Shanghai twice an hour, taking about 45 minutes, Qian has booked cheap seats aboard the K781, a less frequent and slower class of “green train” that takes almost two hours to reach its destination. Having negoti­ated Wuxi Railway Station’s security checks, he enters a large waiting room complete with all the commercial trappings of modern China, including a branch of Starbucks.

But China’s class-apartheid remains in the form of a separate waiting area, off to the side, where the green-train-travelling poor fondle knock-off mobile phones, or drag sacks bundled together with string. Many sit on the floor, on bamboo mats playing cards, as one might do beside a paddy field or construction site. 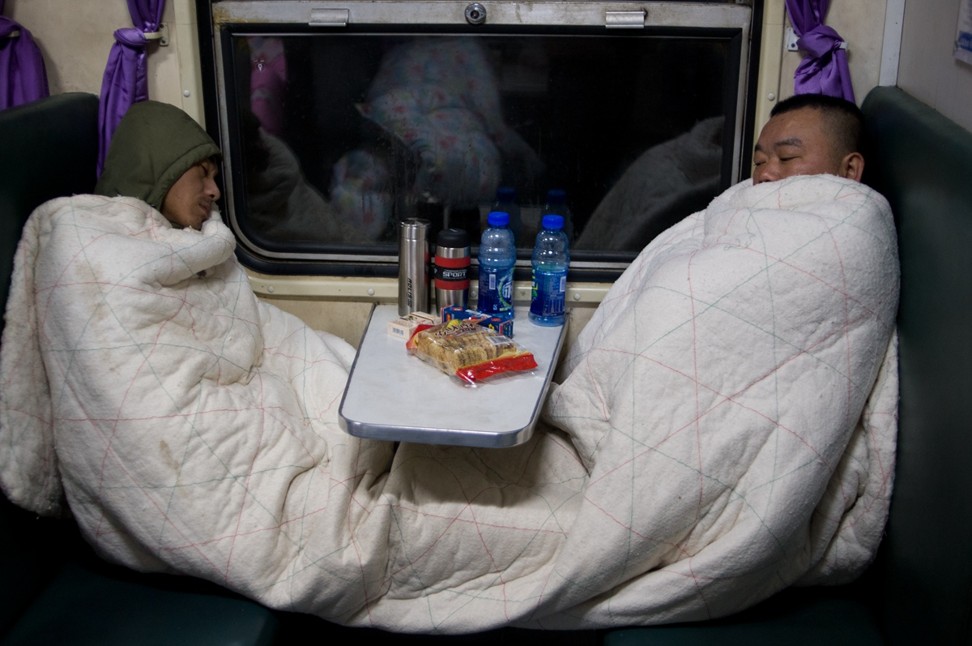 Train No 3256 from Shanghai to Chengdu, in February 2017. Migrant workers who travel home for Lunar New Year often carry their own quilts as there are no heaters in some green trains. Photo: Qian Haifeng

“The green trains are often delayed,” says Qian, boarding a train that should have arrived 10 minutes earlier, “but the high-speed train is expensive – business class from Wuxi to Shanghai costs 182.50 yuan [HK$203] whereas third class on the green train costs 19.50. On what I consider to be the real green trains – those without air conditioners or heaters that are put into service around Lunar New Year – the cost would be even lower, around nine yuan.”

The third-class-carriage tables are piled high with sunflower seeds and peanut shells. Some long-distance commuters are trying to sleep, heads propped awkwardly against window frames with a rolled towel or bunched-up T-shirt for a pillow.

Despite the air of lethargy permeating the train, Qian soon gets to work with street-photographer instincts, snapping at the seemingly mundane, searching for some­thing precious, initially hidden to the casual observer.

“You have to be friendly,” he says. “When I hold my Nikon people suspect me of being a journalist or an artist but I always say I’m just a lone traveller who couldn’t get a first- or second-class ticket. Chinese people are naturally shy, especially country folk, but once you connect with them they open up.”

He trains his camera on a sun-bronzed man in Mao-era green overalls, jiefang (liberation) trainers and a pair of sunglasses, circa 1988 Tom Cruise. Qian chats with him as if he were an old friend, and once put at ease, he begins to shoot, his knee on the dusty carriage floor, lens looking up on the kind of worker typically looked down upon by big-city denizens. 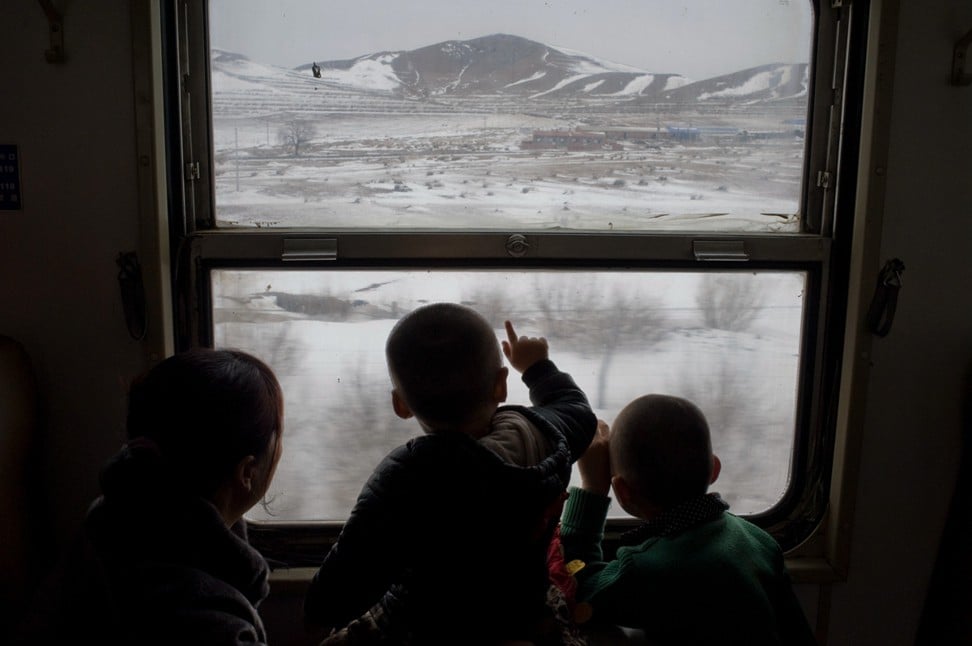 Train No 6859, which runs between Jining South and Zhelimu, in Inner Mongolia, in January 2015. Photo: Qian Haifeng

“I don’t use long lenses or flashy equipment,” says Qian. “It’s all about proximity. The photographers you see at festivals with telescopic lenses and fancy toys are not professionals, they’re almost certainly amateurs.

“I bought this Nikon D750 second-hand, it’s my fourth second-hand Nikon.” Qian runs his fingers over a scratched section of plastic on the camera’s body. “You can see I’ve dropped it a few times.”

Qian’s tenacity and devotion to his art has landed him in trouble on occasion. “The last time I was arrested was in the northeast,” he says. “I was taking a picture of a girl outside a train when three men approached, they said they were police officers and took me in for questioning. My equipment was checked and I was warned that I was in a sensitive border region. But mostly I manage to stay out of trouble.”

Since coming to prominence in 2015, Qian has attended international festivals and his work has been exhibited in France, Japan and elsewhere in China. This has given him broad exposure, not only to a paying audience but to many other Chinese photographers, some of whom have inspired him.

“I love Li Zhengde’s ‘The New Chinese’,” says Qian, “he also shoots people, although his focus is different from mine as he’s more concerned with consumerism. Tang Lingxiao documents his daughter growing up, which speaks to me because I have a daughter, too. Contrary to pretty family pictures, Tang shows all aspects of childhood, warts and all. Many young photographers who went to university are concerned with conceptual art these days but that’s not my cup of tea. They lack bravery and attitude. I’m interested in old hundred names [common people] and the places you’ve never heard of, that’s where you get a picture of China.”

Qian Haifeng’s “The Green Train” will be exhibited at the Lianzhou Foto Festival until April 5 and at the Galerie de L’Illet, Betton, France, from December 14 to February 23. 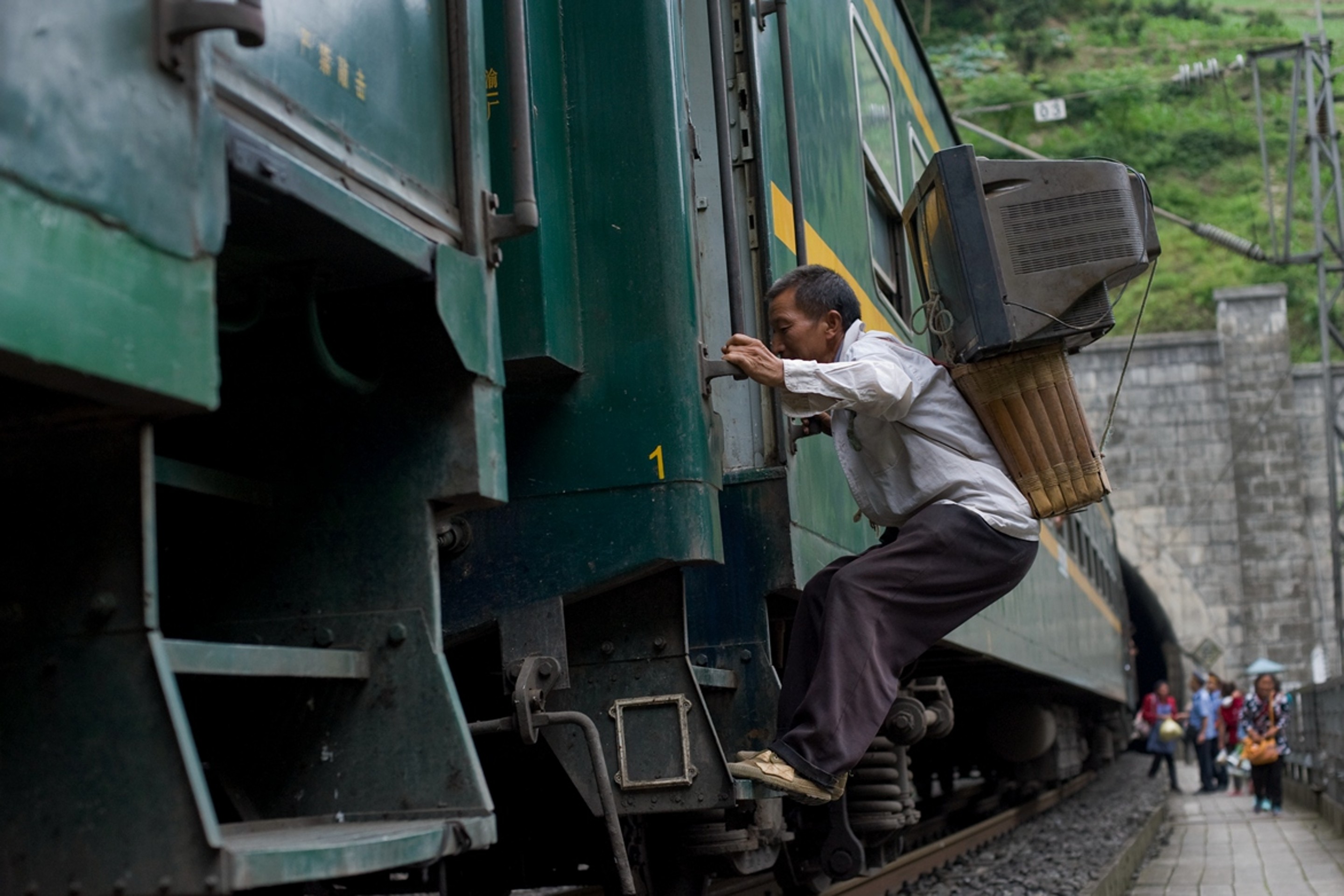 With a repaired television strapped to his back in Cangping station, a villager boards train No 5635, which runs between Neijiang, in Sichuan, and Zhaotong, in Yunnan province, in May 2015. Photo: Qian Haifeng 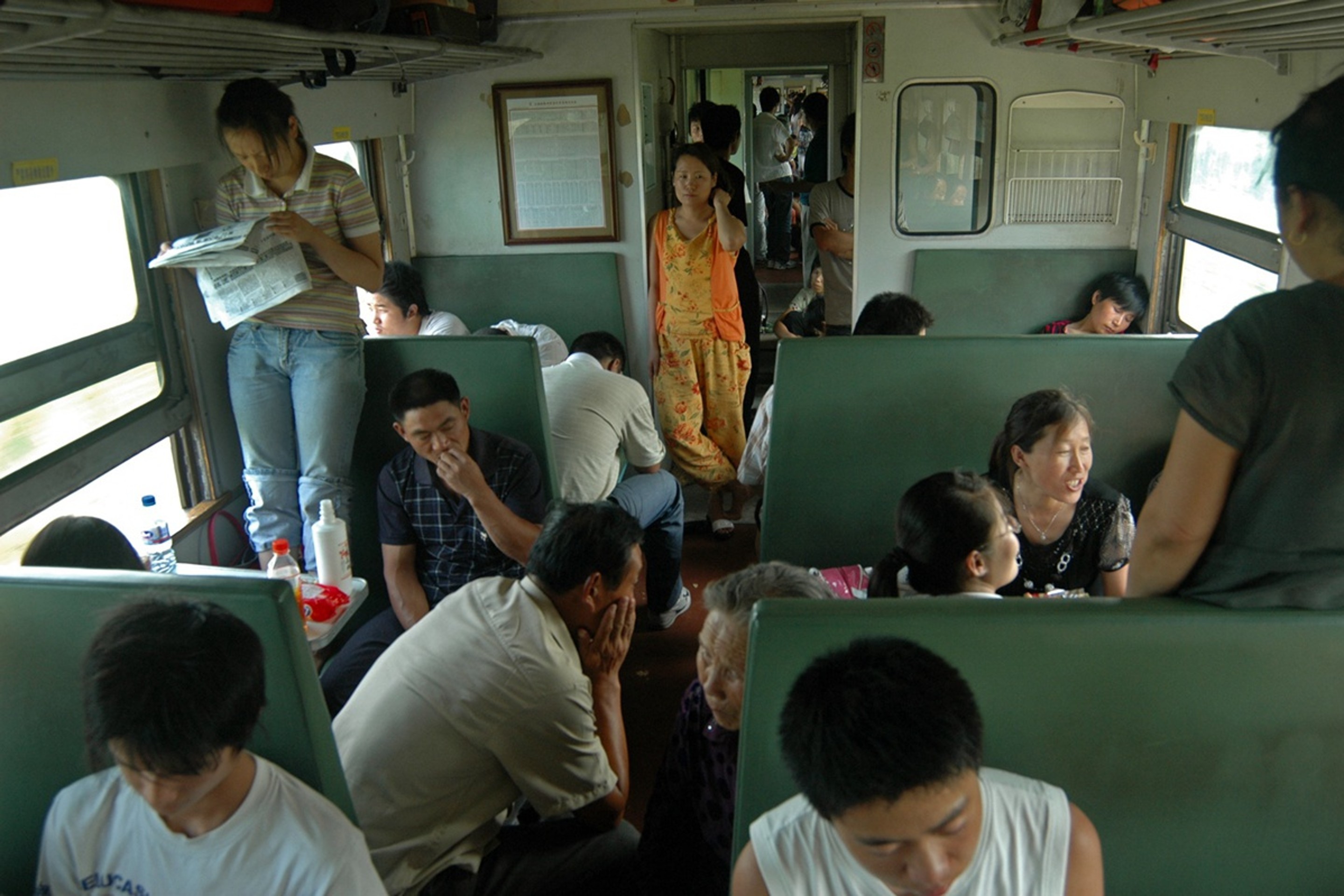 Passengers aboard train No 1470, from Xuzhou, in Jiangsu, to Harbin, Heilongjiang province, in July 2008. “This is the year I began to record the green trains. Ten days after I took this photo, high-speed rail began between Tianjin and Beijing,” says Qian Haifeng. Photo: Qian Haifeng 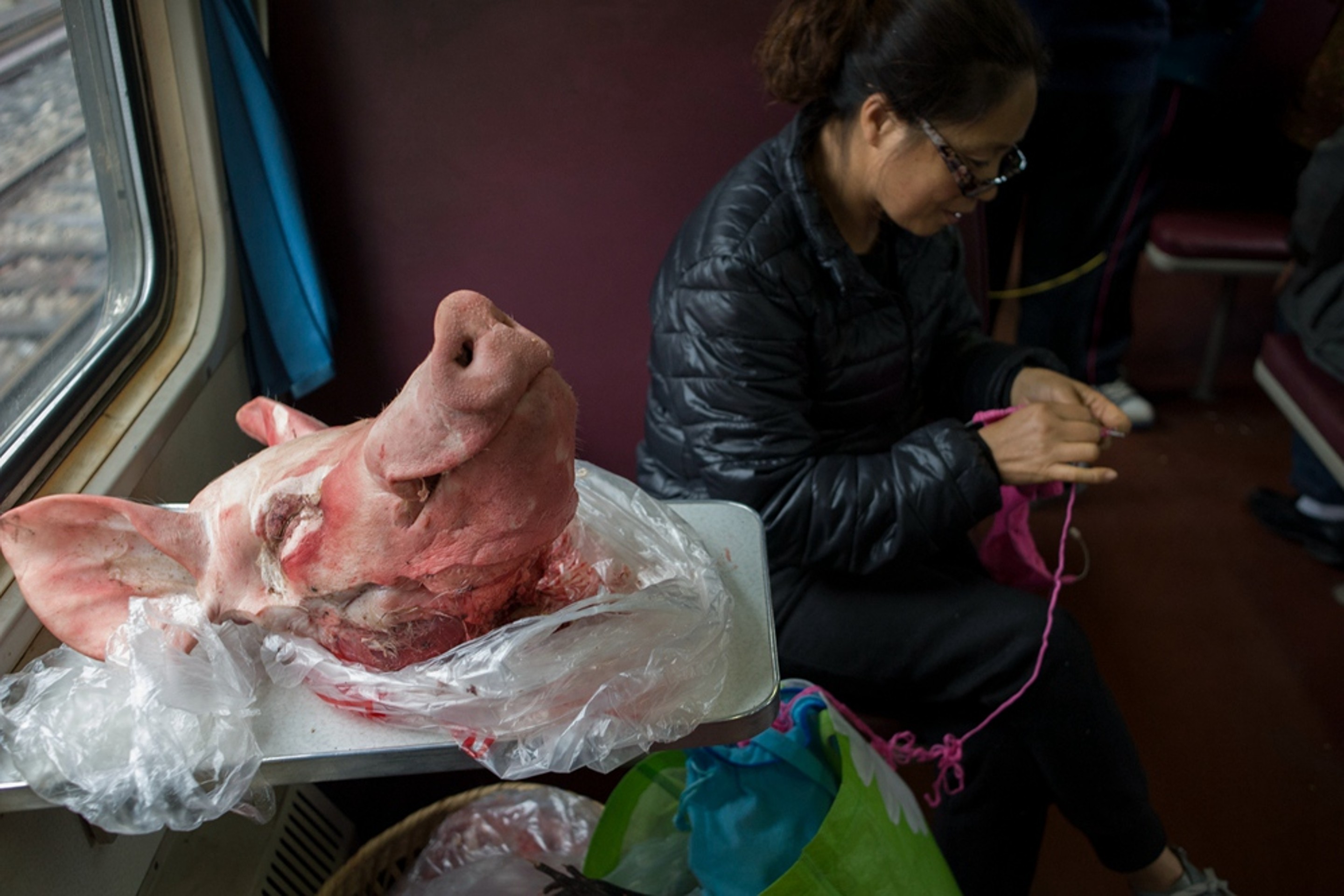 A passenger with a pig’s head on train No 5630, from Zunyi, in Guizhou province, to Chongqing, in November 2016. People from Chongqing take the green train to Guizhou’s mountainous areas to buy meat, which is cheaper there. Photo: Qian Haifeng Train No 6061 from Liupanshui, in Guizhou, to Kunming, in Yunnan, in February 2014. The conventional seating plan has been changed to facilitate the transport of vegetables. Photo: Qian Haifeng 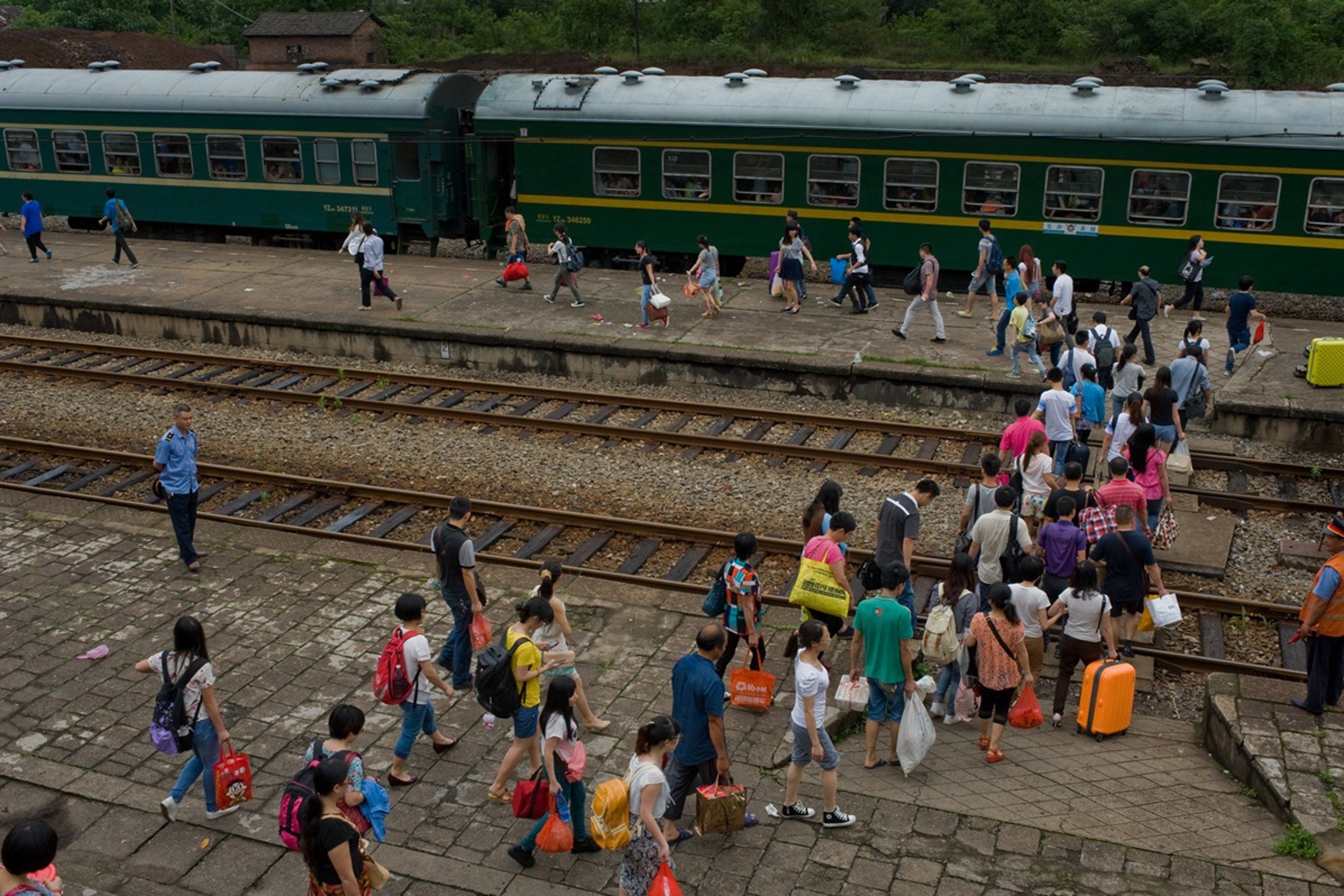 Passengers walk on the tracks to catch train No 2368, which runs from Chaling to Changsha, in Hunan province, in June 2014. Photo: Qian Haifeng 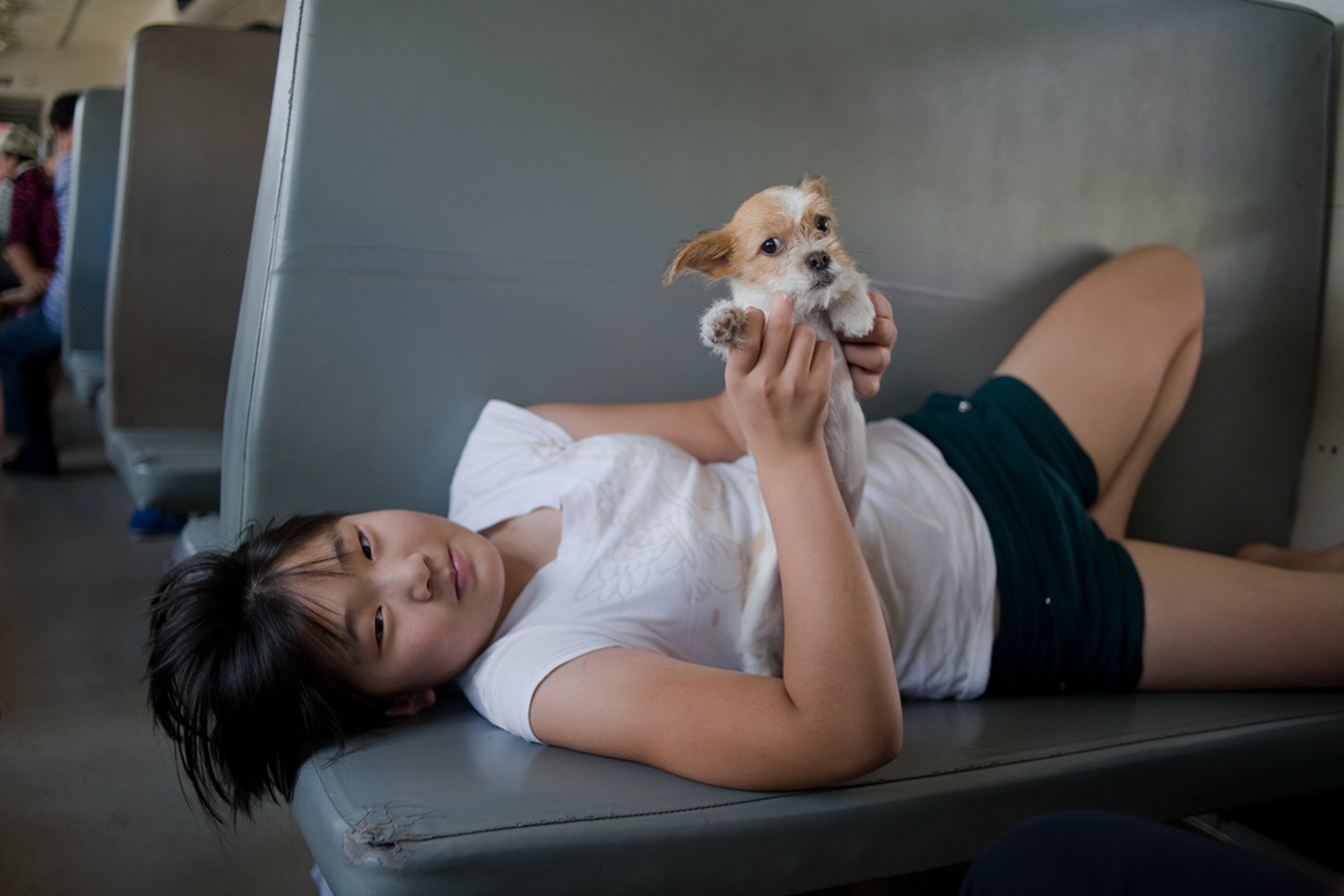 An ethnic Korean girl aboard train No 6345 from Dandong to Longjing, which travels along the border between China and North Korea, in August 2013. Photo: Qian Haifeng 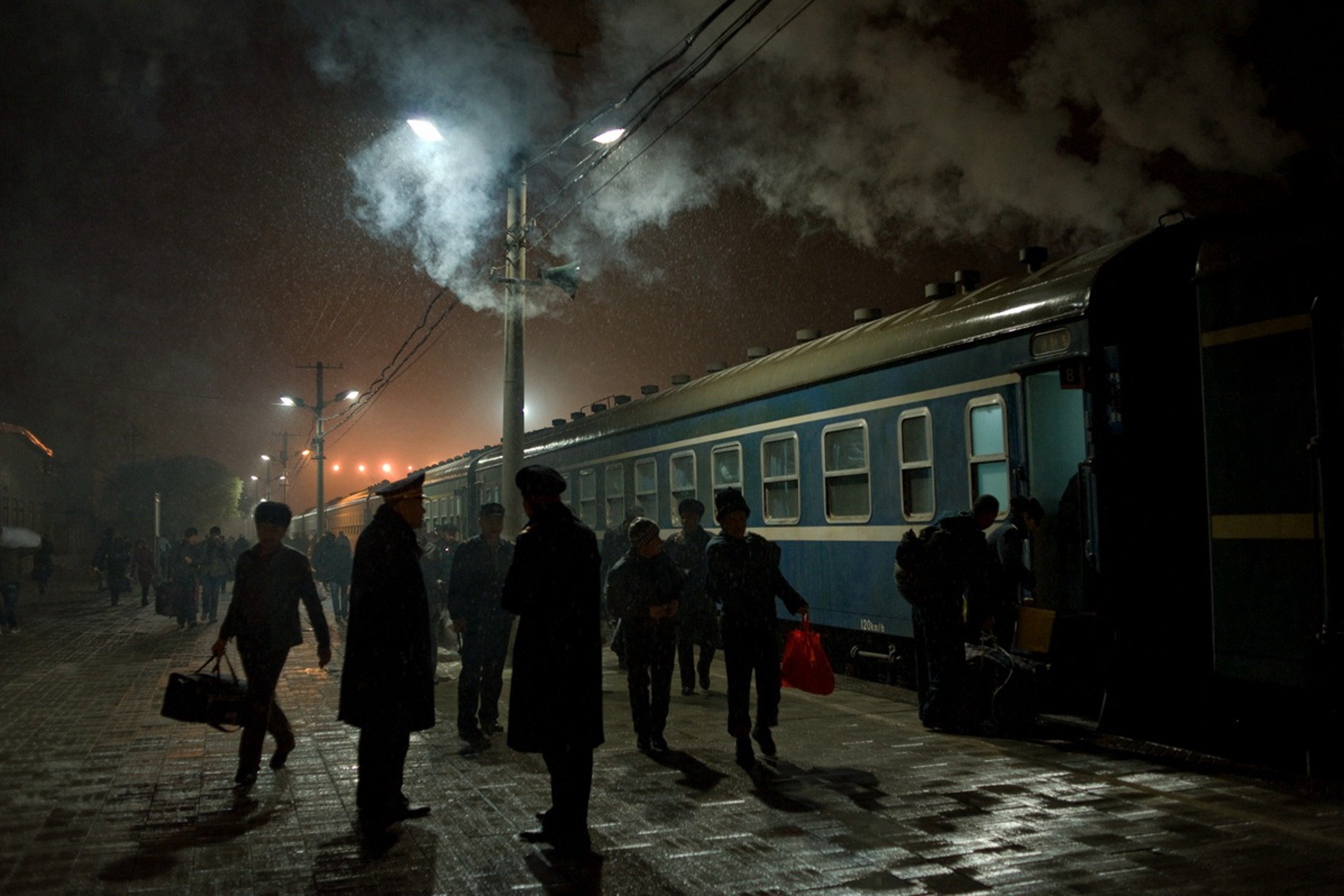 People board train No 7558 (Kashgar to Urumqi) at Kashgar railway station, in the Xinjiang Uygur autonomous region, in November 2013. Photo: Qian Haifeng