Source: NYT (11/23/19)
The Broken Promise of a Panda: How Prague’s Relations With Beijing Soured
When a new mayor of the Czech capital refused to toe the line on Taiwan, Beijing severed its sister-city relationship. Broader repercussions followed.
阅读简体中文版 | 閱讀繁體中文版
By Marc Santora 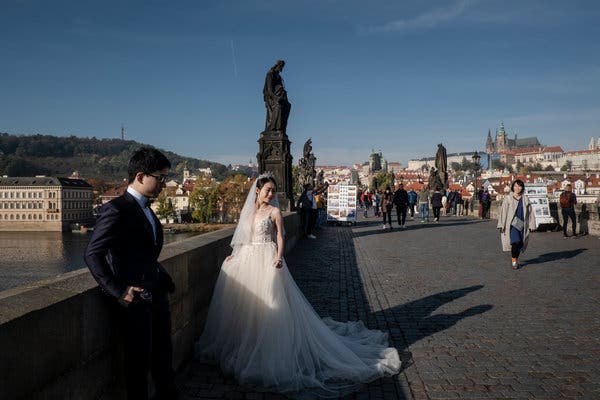 Chanji and Ding Cha, Shanghai natives who are studying in Europe, visited Prague for a wedding photo session and a few days in the city last month. China has threatened to reduce tourism to the city. Credit…Kasia Strek for The New York Times

PRAGUE — On the top floor of an opulent Art Deco building in the heart of old Prague, the new lord mayor was standing with a glass of sparkling wine in hand, greeting diplomats as they made their way into his official residence for a New Year’s gathering.

But when the Chinese ambassador reached Mayor Zdenek Hrib, the diplomat was not in a celebratory mood.

“He demanded that I kick out the representative of Taiwan,’’ Mr. Hrib recalled of the confrontation last January. “I said, ‘We do not kick out our guests.’”

As the line of people backed up, with other ambassadors urging the Chinese representative to move on, he grew more and more incensed until, finally, he stormed out.

For Mr. Hrib, who had been elected just two months earlier, it was the first skirmish in a diplomatic spat that would culminate with Beijing and Prague severing ties as “sister cities” and that today threatens lasting damage to relations between the Czech Republic and China.

At the root of the fight was the mayor’s refusal to line up behind Beijing’s “One China” policy, which insists that Taiwan is a part of China despite having its own democratically elected government.

But more broadly, the disagreement has illuminated the ways China uses its economic clout as it tries to get its way diplomatically and looks to secure a foothold in the European marketplace. 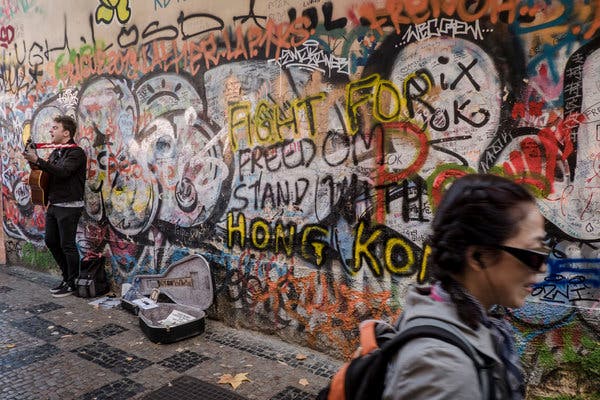 Messages in solidarity with the Hong Kong protests near Prague’s Lennon Wall, a 1980s-era forum for anti-Communist grievances that has been imitated in the semiautonomous Chinese territory. Credit…Kasia Strek for The New York Times

The Czech Republic is one of the smaller nations that Beijing has most aggressively courted.

The high point came in 2016, when China’s top leader, Xi Jinping, was welcomed for a state visit by the populist President Milos Zeman, who had declared that his country would be China’s “gateway to Europe.”

For the Czech Republic, closer ties with China came with promises of increased trade, investment and business deals. For Prague, the deal held the promise of more tourism, cultural exchanges and even a much-coveted panda for the city’s zoo.

Three years later, much of the investment has not materialized, there is greater concern about Chinese espionage than excitement about trade deals and there is no panda at the Prague Zoo.

“The honeymoon is over,” said Filip Jirous, an analyst at Sinopsis, a research group focused on China based at Charles University in Prague. “This is the sobering-up period.”

And Mr. Hrib is part of the hangover. A 38-year-old doctor, he became mayor running with the anti-establishment Pirate Party, which has become the third-largest force in the Czech Parliament in less than a decade.

The party has steadily gained power in part by challenging the eastward-looking foreign policy of Mr. Zeman and the transactional approach of Prime Minister Andrej Babis.

When he took office last November, Mr. Hrib promised to examine the wording of the city’s agreement with Beijing. 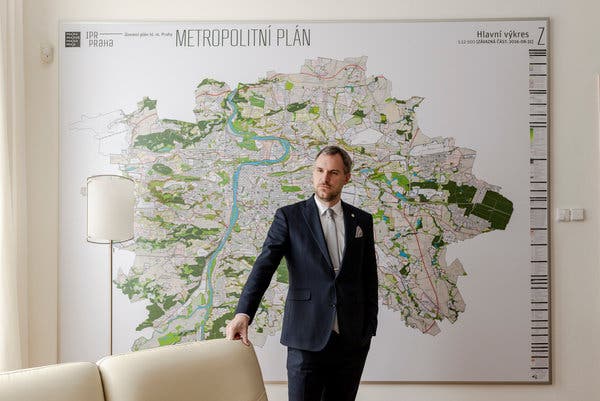 Mayor Zdenek Hrib said that a “One China” declaration in a sister-city agreement had “dragged Prague into foreign affairs.” Credit…Kasia Strek for The New York Times

“Some people say that we should not be involved in foreign affairs,” Mr. Hrib said. “But what we have done is get rid of this ‘One China’ declaration, which dragged Prague into foreign affairs.”

He said he had initially wanted to keep the agreement and just amend it by taking out the “One China” commitment.

But unlike the previous mayor, he was not willing to bend to what he thought unreasonable demands of the Chinese, and he invited a Taiwan representative to the New Year’s reception.

In March, Mr. Hrib traveled to Taiwan, where he had spent two months as a student, a visit that caused more ripples.

By the summer, with the mayor making it clear that he was going to bring the language in the agreement to a vote in the City Council, the issue blew up.

One was the Prague Philharmonic Orchestra, which had spent more than two years preparing a 14-city autumn tour of China.

If the orchestra wanted the show to go on, Chinese officials suggested, it should sign a document rejecting the mayor’s actions.

The group refused. The trip was canceled.

“The cancellation of the tour meant for the orchestra an economic loss of several million Czech crowns,” the orchestra’s director, Radim Otepka, said in a statement. “However, we consider as much more damaging the fact that culture has been subject to political pressure.”

Mr. Hrib said the overt pressure by China reminded many Czechs of the ways their former Communist rulers operated. The tensions have also strayed into more consequential arenas.

It recommended blocking Huawei from building the infrastructure of the fifth generation of wireless technology, known as 5G, in key sectors.

More recently, there have been concerns that China was trying to use its influence at academic institutions.

The company that has profited the most from close ties to China is a privately held financial and investment firm, PPF Group. Its founder, Petr Kellner, is the Czech Republic’s richest man.

The firm’s Home Credit division issued loans worth more than $15 billion to Chinese consumers this year alone, according to public records.

So when Home Credit announced that it wanted to sponsor a program at Charles University, the oldest institution of higher education in Central Europe, it had a condition: The university must agree not to do anything to hurt the company’s business around the world.

Students and professors recoiled, and faculty members threatened to quit. The plan was scrapped, and the school’s rector issued a public apology.

The Czech president, Mr. Zeman, has sought to limit the damage. He wrote a personal letter to Mr. Xi emphasizing “that the Czech Republic, its government, fully respects the policy of one China,” according to a summary provided by his office.

Chinese officials, for their part, have threatened to limit the number of tourists coming to the country — a prospect that does not have many people in the clogged historical center of the city concerned.

After sanctions were placed on Russia following its annexation of Crimea in 2014, the Chinese quickly supplanted them as the biggest spenders on Prague’s version of Fifth Avenue, Parizska Street, which is lined with stores like Prada, Tiffany & Company, and Hermès.

It is not the threat of fewer tourists that concerns officials, but rather, creating sustainable tourism that truly benefits local businesses.

“We are not exactly trying to get more people into Prague,” Barbora Hruba, a spokeswoman for the Prague tourism office, said.

At the zoo, where officials had unveiled a $9 million plan to create a panda pavilion on top of a hill overlooking the city, two polar bears were still swimming, and officials have turned their sights on a different animal.

“When I was little, I had this book with very nice black-and-white photos,” Mayor Hrib said. It illustrated a walk through the Prague Zoo.

“And the coolest animal there was the pangolin,” he said.

The creatures, which look like scaly anteaters, are the most trafficked nonhuman animals in the world. Taiwan has played a key role in saving them from extinction and is now home to what is probably the largest population of the creatures in captivity.

Mr. Hrib has spoken to the mayor of Taipei and is hopeful that where panda diplomacy failed, the promise of the pangolin will become reality.