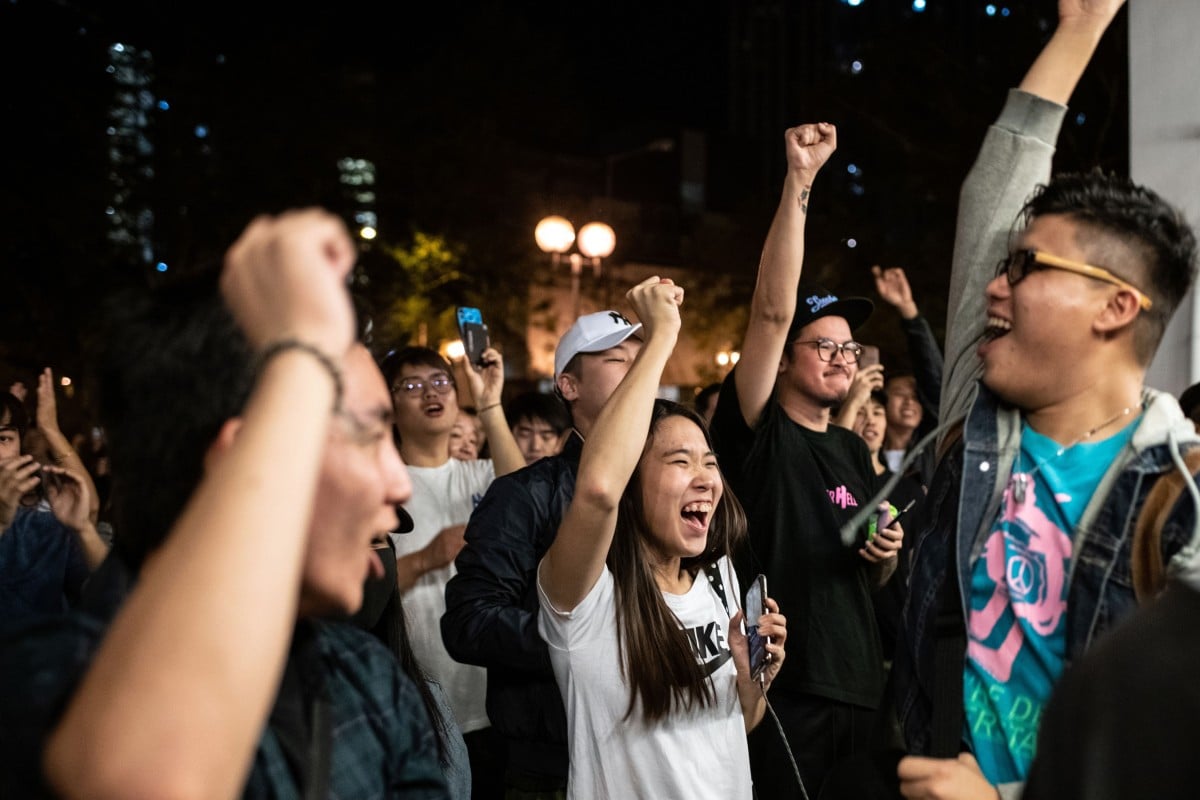 Pro-democracy supporters celebrate the defeat of Junius Ho Kwan-yiu, one of the most high-profile victims of Sunday’s vote. Photo: AFP

Mainland China on Monday tried to brush aside the landslide defeat for the pro-establishment camp in Hong Kong’s district council elections with news of the results being heavily censored.

State media preferred to focus on calls for law and order to be preserved and the accusation that Western countries had been instigating unrest.

Many official media outlets only ran brief reports on the vote, with state news agency Xinhua declining to report the results, in which the pro-democracy camp took control of 17 out of 18 councils.

“According to the announcement by the Electoral Affairs Commission, all 452 district councillors of 18 districts have been elected,” it said.

The report continued: “In the past five months, violent rioters who wanted to turn Hong Kong upside down have colluded with foreign forces … non-stop social unrest has seriously disrupted the election process, and some troublemakers have harassed individual patriotic candidates on the election day.

People’s Daily, the Communist Party’s mouthpiece, meanwhile said in a commentary published on its Weibo account that Sunday’s elections had been held under the “shadow of black terror” and praised the Hong Kong police for doing their best to ensure a “peaceful, safe and orderly” poll.

Speaking to reporters in Tokyo, Foreign Minister Wang Yi also played down the significance of the defeat and said the elections would not change the fact that Hong Kong was part of China.

“It’s not the final result yet. Let’s wait for the final result, OK? However, it is clear that no matter what happens, Hong Kong is a part of China and a Special Administrative Region of China,” Wang said on Monday morning before all the results had come in.

He also alluded to the charge that Western countries, especially the US, have been encouraging the anti-government protests, saying: “Any attempt to mess up Hong Kong, or even damage its prosperity and stability, will not succeed.”

Xinhua also published a commentary attacking US politicians for pushing the Hong Kong Human Rights and Democracy Act – which recently passed both houses of Congress.

The commentary warned that some American politicians were “playing with fire” and said their ploy was doomed to fail.

Two mainland academics specialising in US affairs argued that the election results would only serve to escalate tensions between Washington and Beijing over Hong Kong.

Zhu Feng, a professor of international relations at Nanjing University, said the congressional vote was a timely way for lawmakers in Washington to show support for the anti-government protesters.

“They will see it as another big victory for US human rights diplomacy,” Zhu said, referring to the increased profile given in Washington to issues such as Hong Kong and Xinjiang, where the Chinese authorities are accused of detaining a million Muslims in re-education camps. 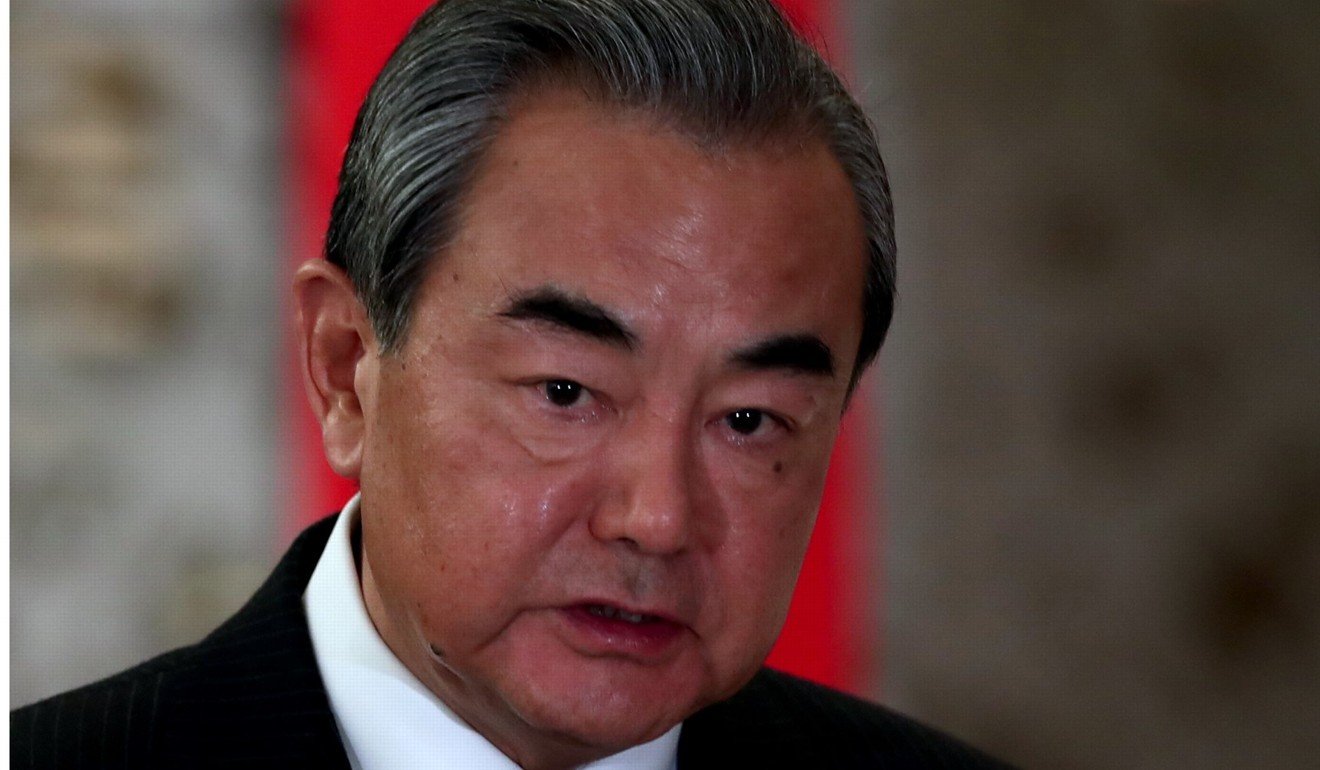 China’s Foreign Minister Wang Yi said the result would not change the fact that Hong Kong was part of China. Photo: AFP

Zhu also argued that the results would cause further “uncertainties” in US-China relations “as Washington appears keen to use democracy and human rights to attack China”.

Huang Jing, from Beijing Language and Culture University’s Institute of International and Regional Studies, said Washington was likely to step up its support for Hong Kong’s pro-democracy activists.

“Both sides will look attentively at the Hong Kong Legislative Council election next year as Hong Kong has apparently become a new flashpoint between the two countries,” Huang said.

However, both Zhu and Huang believed that the two sides would try to separate the issue from other thorny topics, such as the ongoing trade talks between the two sides.

Song Sio-chong, professor of the Centre for Basic Laws of Hong Kong and Macau at Shenzhen University, said Beijing was puzzled by the strong support for pro-democracy candidates.

“It appears that voters in Hong Kong cared less about the economy and livelihood issues and wanted to vent their anger at the government,” Song said.

“If this is true, then the future governance of Hong Kong could become difficult and there is not much that Beijing can do.”

But Song was not convinced that the result would have a major impact on next year’s Legislative Council Elections or the selection of future chief executives.

“Past Legco elections showed that the split between pro-Beijing and pro-democracy camps was usually about 40-60, and that was consistent with [Sunday’s results],” Song said.

The success of the opposition candidates could allow them greater influence over the selection of chief executives, who are picked by a panel.

But Song argued that even if the opposition filled all the seats reserved for council representatives on this panel, Beijing would still have a sufficient “buffer” to control the process.

It “failed to take advantage of [abundant] resources and public complaints about the chaos caused by the radicals”, Li said.

He said one of the main reasons for this failure was because the pro-government side “had no choice” but to support an extradition bill that would have allowed suspects to be sent to face trial in mainland China. The bill, which has now been withdrawn, triggered the first mass demonstrations over the summer.

Tian Feilong, a specialist in Hong Kong policy and a law professor with Beihang University in Beijing, also called the results a “big political lesson”, urging Beijing and the pro-establishment camp to carefully review their approach.

“The pro-establishment camp made little effort to drill deep into the specific circumstances of individual districts, and [as a result] they suffered defeats although by relatively small margins,” Tian said.

“In addition, the violence that happened during electioneering has also dampened the enthusiasm among individual pro-establishment candidates.”

Tian also warned urged Beijing and the pro-establishment camp: “If you don’t reflect and change [your strategy], then the defeat will happen again.”