Source: NYT (11/19/19)
Parents of Besieged Hong Kong Protesters Come to the Front Lines
The parents of young people under siege at a university emerged as a call for compromise.
By Tiffany May and Paul Mozur 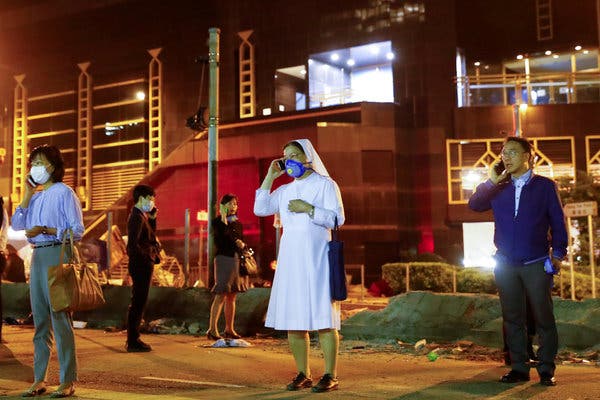 HONG KONG — One mother fell to her knees before riot police officers and begged for her daughter’s release. Another promised she would boil soup for a trapped son before he made a desperate escape across police lines. From a distance, a father got his first glimpse of his son in days — as the son was led away in handcuffs.

As the police siege of Hong Kong Polytechnic University trapped more than 1,000 pro-democracy protesters this week, another group entangled in the city’s crisis has turned conspicuously outspoken: their parents.

The voices of mothers and fathers, racked by fear and anger, emerged as a call for compromise in the standoff on the campus, where on Tuesday several dozen holdouts remained.

Many parents worried not only about the safety of students in Hong Kong’s increasingly violent protests, but also about the longer-term consequences for young adults whose lives could now be upended by abruptly truncated educations, criminal charges and prison.

At the same time, parents said their exposure to the police tactics — some have seen police beatings or been hit with nonlethal projectiles themselves in the mayhem —had made them more sympathetic to their children’s choices to defy and resist.

“If it were not for my daughter being inside, I would not have stood so close to the front,” said Sam Ho, a 43-year-old interior designer. His 17-year-old daughter told his wife that she had gone to the school, known as PolyU, to return books on Sunday. Soon after, her online communications cut off. Without telling her parents, she later joined a pro-peace prayer meeting on campus.

That day, the police blocked exits to the campus after protesters had set fire to a bridge, stopping traffic on a key tunnel nearby. The move effectively trapped the protesters, leaving them to fight it out or leave in handcuffs. It also drew demonstrators from across the city into violent confrontations with the police as they sought to rescue people from the standoff. 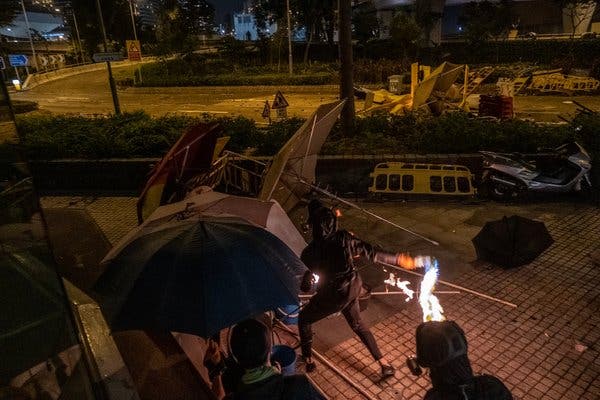 Being close to the action changed some parents’ thinking on the petrol bombs that protesters were throwing at the police. Credit…Lam Yik Fei for The New York Times

“Before, I wondered whether some things the protesters, or those who appeared to be protesters, did cross a line. But now I have a deeper understanding of why they had to use those tactics,” said Mr. Ho, adding that he had been most worried that the police would hit and kick his daughter. Video footage of a number of arrests outside the campus showed police officers beating detained students.

Mr. Ho was so distraught on the first night that he joined three parents in a wild rescue bid. The group scaled a high chain-link fence to get onto campus, but abandoned their attempt after one was shot by the police with a beanbag round and tumbled into the bushes.

Being close to the action changed Mr. Ho’s thinking on the petrol bombs that protesters were hurling toward riot officers. “The Molotov cocktails they throw are mainly to create a distance from the police,” he said.

Mr. Ho was one of a few hundred parents, many with students inside, who sat near police lines wearing masks and holding signs with messages like “Save the kids, don’t kill our children” and “They are children of God! Let them go!” Many said they had come out simply to be close to their children inside the campus, just hundreds of feet away.

At a news conference they held on Tuesday, the parents made pleas to the Hong Kong authorities, questioning the uncompromising language that has become standard in the city’s political impasse.

Several criticized the authorities for having labeled everyone on campus as rioters. For months, Hong Kong’s police and government, along with China’s state news media, have used the term “rioter” to describe protesters, whether peaceful or violent. 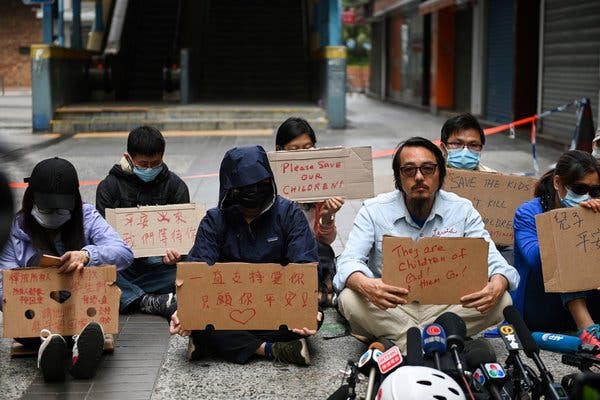 Parents held a news conference on Tuesday in which they made pleas to the Hong Kong authorities. Credit…Ye Aung Thu/Agence France-Presse — Getty Images

“Why should all the students inside be charged with rioting no matter what role they played? What kind of logic is this?” said Chu Chan, a 50-year-old warehouse worker. Her son had remained on campus because he feared a rioting charge that can carry a 10-year prison sentence. As of Tuesday afternoon, he was still on campus.

Ms. Chan said her son was studying to be a social worker and cared about others.

“When I heard he was inside PolyU, I began shivering,” she said. “I started to blame him, but then I remembered that he was probably feeling more helpless than me inside. I cannot condemn him.”

For the parents, potential incarceration of their children is just one concern. Food supplies ran low during the days-long deadlock, cellphone signals were intermittent and the water supply was eventually cut off.

On Sunday evening, the police warned that they could use live rounds against the protesters. Students inside said that food and supplies were inadequate and that they were without medical care after first-aid workers were arrested. During a police raid on Monday morning, explosions and shots boomed off buildings.

Then came the escape attempts. Some students glided down ropes off bridges and jumped onto the backs of waiting motorcycles. Others made futile charges through plumes of tear gas in an attempt to break through cordons of armed riot police officers. Dozens took to the sewers in a subterranean dash for freedom but turned back, sickened by the fetid dankness.

Rescuers said that at least 200 protesters in all had managed to escape. Around 70 were sent to the hospital for hypothermia and dizziness after their failed sewer gambit. 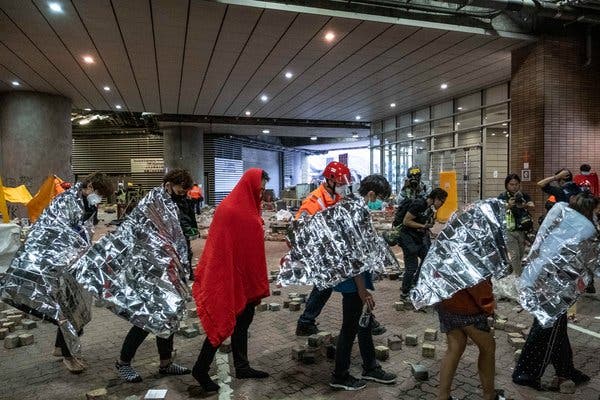 Protesters who tried to escape from the university through the sewers emerged sickened and still on campus. Credit…Lam Yik Fei for The New York Times

In total, the police said 1,100 had been arrested or registered among a group of secondary school students who were allowed to leave early Tuesday morning. Mr. Ho’s daughter was among that group.

Later Tuesday, a pro-democracy lawmaker, Ted Hui, led most of the remainder of the students peacefully off campus to be arrested. By evening, about 50 remained.

The parents’ fears struck a nerve for a movement that has made heavy use of family analogies. Volunteer drivers who speed protesters away from the police and ferry them around the city are often called “parents” and refer to their activities as “picking up the kids.” Family support networks, rarely evident during street clashes, keep protesters — many of whom are young students — supplied with food, water and even gas masks.

Eva Lau, a 51-year-old businesswoman, said that while she had attended peaceful marches, she disagreed with her 22-year-old son over his attendance at protests that descend into violence and vandalism. On Sunday evening, as fiery clashes between protesters and the police at PolyU escalated, her son said he wanted to attend the pro-peace prayer meeting at the school.

When she tried to dissuade him, she said, he told her that “if everyone thought like you, then no one would be left to protest anymore.”

A native of Hunan Province in mainland China who came to Hong Kong in the mid-1980s, Ms. Lau said that she was skeptical of both ends of the political spectrum in the city, but that she had come to favor the pro-democratic camp. 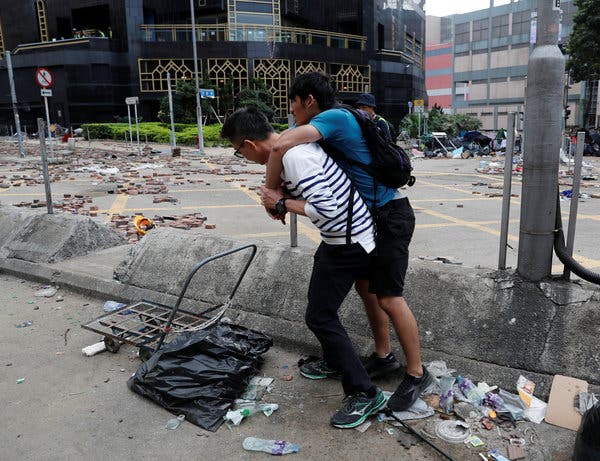 A man carried his son outside Hong Kong Polytechnic University as they waited for an ambulance. Credit…Adnan Abidi/Reuters

She also told of a recent encounter of her own with the police. As she walked past a street clash one night, officers shined their flashlights at her, an act that prompted her to yell at them, “I used to have a great deal of respect for you, but now I have firsthand reason not to.”

For her son, Ms. Lau said she hoped he would learn that there are better ways to fight injustice. Still, she said she had been thinking of rejoining the protests.

“I am against all violence, even from the kids,” she said. “But now I can see that they are being strategic in order to fight authoritarianism — and trying to resist the government.”