Source: SCMP (11/13/19)
High Court denies injunction sought by Chinese University student leader to bar Hong Kong police from campus after days of clashes with protesters
Jacky So files for temporary injunction after CUHK was the site of clashes between protesters and riot police that led to 119 people being injured. But court dismisses bid, with lawyer arguing that criminals could hide on campus if police did not have a warrant to enter
By Tony Cheung 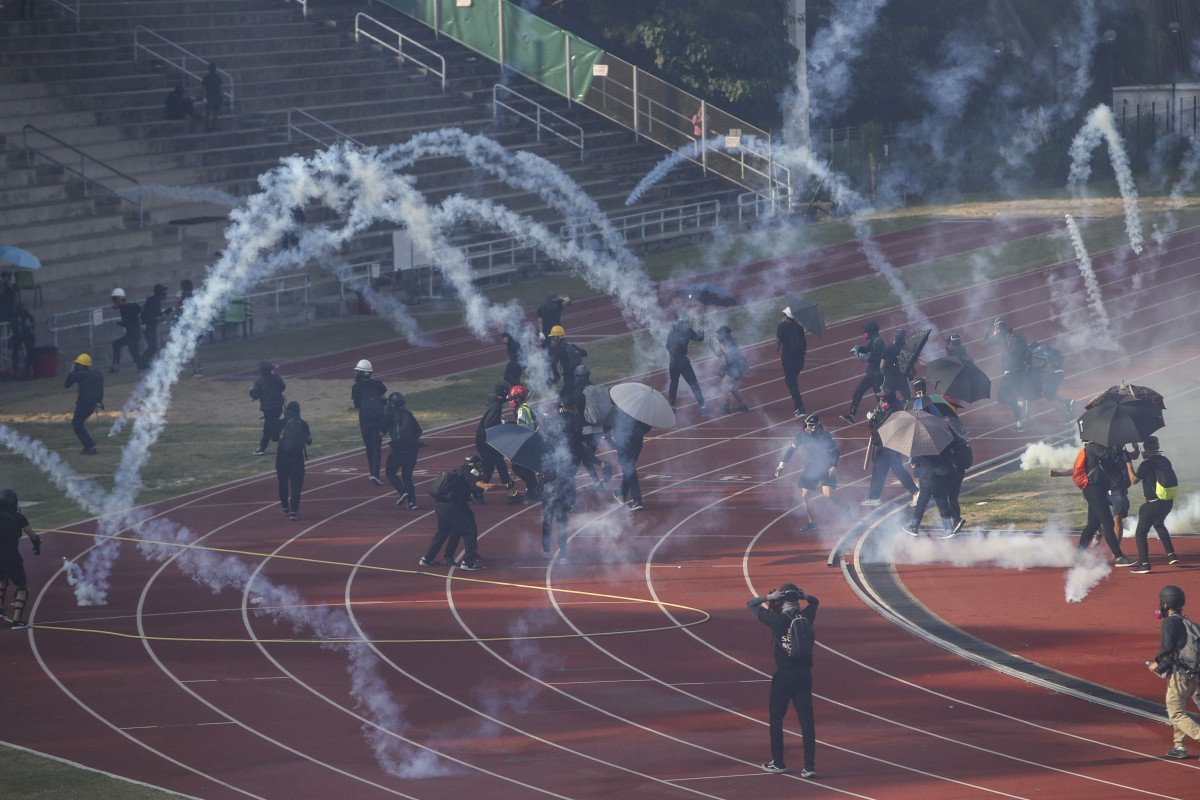 Clashes erupt on Tuesday between anti-government protesters and riot police on the campus of Chinese University. Photo: Winson Wong

A Hong Kong court has dismissed an urgent injunction application by a Chinese University student leader to bar unauthorised police from campus after the school became a battleground for anti-government protesters and the authorities.

Jacky So Tsun-fung, the CUHK student union president, filed an application on Wednesday for the temporary injunction to the High Court after his school was the site of a tense stand-off between protesters and riot police that started on Monday and led to 119 people being injured.

The court heard that protesters stalled public transport for two days by throwing objects from a No. 2 Bridge above a highway and the MTR East Rail line. Riot police arriving at the bridge were brought to a standstill by protesters who hurled petrol bombs at the officers.

Parties agreed that the bridge was a public space maintained by CUHK according to a government lease. It was disputed, however, whether areas beyond the bridge were also public areas that police could freely access.

In the ruling handed down after an urgent hearing on Wednesday evening, Mr Justice Wilson Chan Ka-shun said the applicant had failed to establish a serious issue to be tried.

He said during the clashes, the police had observed protesters blocking roads and railways as part of a strike movement “to paralyse Hong Kong in blatant disregard of life and safety of the public”.

Against this backdrop, he stressed that section 17(2) of the Public Order Ordinance empowered any police officer of or above the rank of inspector to “stop or disperse any gathering or procession whatsoever or wheresoever, if he reasonably believes that the same is likely to cause or lead to a breach of the peace”.

He also said the court had no reason to restrict the police’s exercise of force in a blanket manner.“An interim injunction order will become a significant hindrance against the fource’s law enforcement … which shall very much depend on the circumstances and developments at or in the vicinity of CUHK in a responsive manner,” he said in the judgment.

He ordered the applicant to bear the costs incurred by the police in the proceeding.

During the hearing, Audrey Eu Yuet-mee SC, representing So, told the judge that under the Police Force Ordinance, officers could enter the university – a private area – only if they had to arrest suspects or were granted access by either the school or the court via a search warrant. 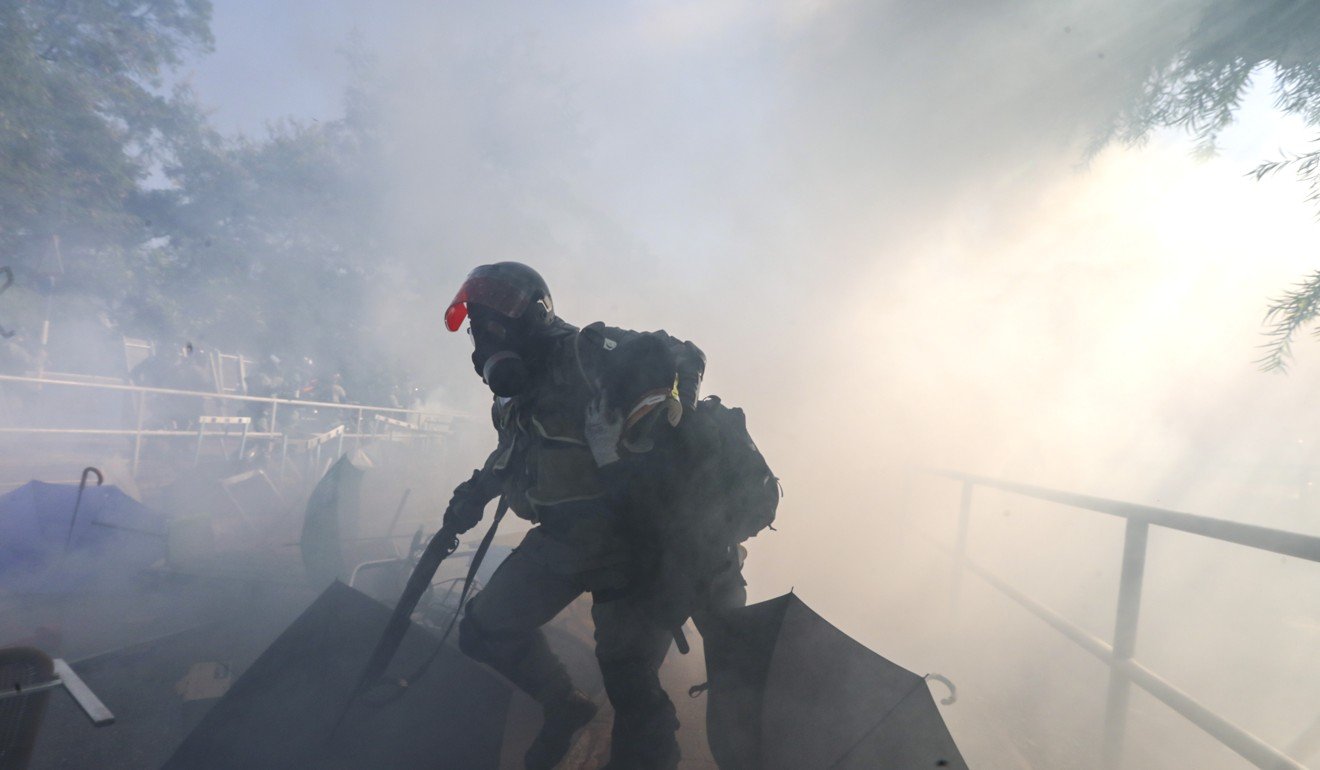 She argued that police did not satisfy either of these criteria when they crossed the bridge on multiple occasions during the conflict.

“We are asking you to hold the police to the rule of law,” she told the judge, adding that the court would be giving “the wrong signal” if it ruled in favour of the force.

Chan disputed the claim, saying that university grounds were public places as defined as places to which the general public has access. He also questioned Eu’s stance that police firing tear gas on campus was illegal, fearing it would amount to an undue hindrance of police operations if the court ruled in her client’s favour.

Eu stressed the campus was private property and that the police could not enter the university by saying they were operating “in the vicinity of a public place” or be allowed to fire tear gas in a private area.

Jenkin Suen SC, for the commissioner, said the university was a public place that all members of the public could enter.

He argued that protesters had adopted “very disproportionate” methods in an attempt to paralyse the city’s transport system, and that officers had entered the bridge only to ensure safety for the transport network.

He continued that if the court granted a temporary ban, it would be giving “some sort of blessing which would be misinterpreted” to the community, essentially a message that criminals could hide inside the campus if police did not have a warrant.

According to the court filing for judicial review, So asked the court to make it illegal for the Commissioner of Police to direct frontline officers to enter CUHK “without warrant or lawful justification” on four dates – October 6, November 7 and November 11 and 12.

He also challenged the commissioner’s decision to deploy special crowd-control measures, including tear gas, rubber bullets and other projectiles, within the school premises without legal justification.

The filing argued that the police actions were unconstitutional and amounted to an intrusion on private premises, a right protected by article 29 of the city’s Basic Law and article 14 of the Bill of Rights.

“The precincts of the CUHK is owned and controlled by CUHK. More importantly, it is the second home of many students of the CUHK, including the applicant,” the court filing said.

It said the police had no authority to stop or disperse any gathering on the CUHK campus because this power was only confined to stopping unauthorised public meetings under section 17 of the Public Order Ordinance.

Speaking outside the High Court, So said the police had endangered students on campus, adding that a police officer had set trees on fire after firing tear gas towards the hillside of the university.

He accused the police of entering the school without any reason and provoking students. He also said the school should have been more proactive in its response to the police presence.

“When Rocky Tuan Sung-chi, our school’s vice-chancellor, wanted to negotiate with the police, officers fired tear gas at him,” So said. “Apparently, the police have got so frenzied that they will use weapons against anyone without caring who they are.”

He added that CUHK students would use all methods to resist police brutality.

Tensions between protesters and police have intensified after the death of Chow Tsz-lok, 22, an undergraduate at the University of Science and Technology, who died after falling from a Tseung Kwan O car park on November 3 while protesters clashed with riot police in the vicinity.

The mishap was followed by escalated clashes on Monday, when a police officer shot a student protester with a live round in Sai Wan Ho and a man was set on fire in the residential town of Ma On Shan.