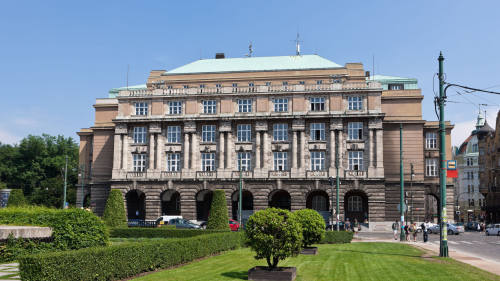 The controversy at the university comes as politicians, civil society groups and academics are pushing back against their country’s alignment with China © Alamy

Prague’s Charles University is being shaken by a scandal over secret Chinese payments to four of its faculty members, amid concerns that Beijing could use its ties with some Czech politicians to build influence in academia.

The university, one of the world’s oldest academic institutions, fired Milos Balaban, until recently head of the university’s Centre for Security Policy (SBP), and two other members of the social sciences faculty last week. The move came after the school discovered they had set up a private company under the name of SBP which was paid by the Chinese embassy for conferences co-organised by the university centre.

The payments, first revealed by Czech news outlet Aktualne, have triggered a university probe of several companies owned by Mr Balaban, Mirka Kortusová, a financial and project manager at the CSP, and Libor Stejskal and Jan Ludvík, two research fellows at the centre.

“In light of current findings, we can see how vulnerable universities are to foreign influence,” said faculty spokesman Jakub Riman. “We believe this is a broad risk and we aim to prevent anything like that from repeating in the future and getting to the bottom of it.”

The controversy comes as politicians, civil society groups and academics are pushing back against their country’s alignment with China since Milos Zeman, the president, visited Beijing in 2014 and reversed Prague’s longstanding policy of distance from China.

Beijing started seeking closer relations with central and eastern European countries in 2012. In the Czech Republic, those efforts fell on fertile ground: Mr Zeman declared that he hoped to make his country an “unsinkable aircraft carrier of Chinese investment expansion” in Europe.

“President Zeman promised big investment from China in the Czech Republic, but these did not materialise. If there were investments, they were not really investments in the sense of building new factories or offering new jobs, they were just acquisitions of [assets],” said Jiri Pehe, director of the New York University in Prague. He added that Mr Zeman’s policies “legitimised this approach in which the door to China remained completely open”.

The SBP case has fuelled questions as to whether the Chinese Communist party (CCP) could seek to influence academia on the back of close relations with politicians and business.

“In some western countries with a lot of immigrants, the CCP can rely on local Chinese communities to build influence. Here in central Europe, we don’t have that many Chinese, so they need to capture the local elites,” said Jakub Janda, director of the European Values Centre, a think-tank that focuses on Russian and Chinese influence operations. “Once they can influence the next generation of academics, they can secure the pro-CCP interpretation of everything.”

Anne-Marie Brady, an expert on Chinese influence operations at the University of Canterbury in New Zealand, said the CCP had long been “helping people who help them to make money”. But secret payments directly from a Chinese embassy are unusual.

In a letter to the Social Sciences faculty seen by the Financial Times, Mr Balaban confirmed that his SBP company received money from the Chinese embassy to finance conferences organised by the Czech-Chinese Centre of Charles University, which promotes bilateral academic and student exchange. In a report to the faculty senate also reviewed by the FT, faculty dean Alice Nemcova Tejkalova said SBP shareholders had remained silent about the Chinese funds throughout a university audit.

Mr Balaban is head of the Social Democratic party’s defence committee. While there is no evidence that he lobbied for China, the Czech domestic intelligence agency has in the past accused speakers at the Prague Security Conference, which he organises, of ignoring security risks posed by Russia and China.

Mr Ludvik, who is a shareholder but not an executive at the SBP company, said his contract at the university had not been terminated.

A spokesman for SBP said the company had commissioned a “comprehensive” assessment of its accounting by an external accountant that would form the basis of a forensic audit of its activities. He added that the group would address the conclusions of the audit in a press conference in the coming weeks.

Mr Stejskal rejected the allegation that the payments meant that either he or the Charles University were exposed to Chinese influence. Mr Balaban denied “any evident exposure to Chinese influence”. He declined to comment on the company SBP until the audit was completed.