Source: NYT (11/7/19)
Anger in Hong Kong After Student Dies From Fall Following Clash With Police
The death of the student, Chow Tsz-lok, ignited public fury after months of antigovernment demonstrations.
By Austin Ramzy and Ezra Cheung 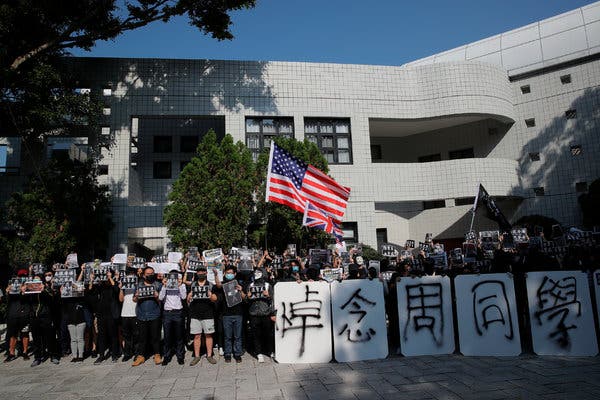 Protesters with placards that read “missing classmate Chow” gathered Friday outside the home of the president of the Hong Kong University of Science and Technology. Credit…Kin Cheung/Associated Press

HONG KONG — A Hong Kong student died on Friday after falling earlier this week from a parking garage where police officers clashed with protesters, a development that further escalated the public’s fury after months of antigovernment demonstrations.

Chow Tsz-lok, who was a student at the Hong Kong University of Science and Technology, sustained head and pelvis injuries when he fell one story early Monday morning. His death on Friday morning was confirmed by the city’s Hospital Authority.

Anger with the police has run high over the force’s widespread use of tear gas, pepper spray and batons on demonstrators during five months of protest. A key demand of the protest movement, which began over a now-withdrawn extradition bill, has been an independent investigation into the police’s use of force.

Thousands of people, including police officers, have been injured since the protests began in June, but despite the rising violence, no one has been killed in the clashes up until now. The police shot and wounded a demonstrator on Oct. 1 and another three days later in what they described as acts of self-defense.

In addition, several protesters have killed themselves this summer.

Wei Shyy, the president of the Hong Kong University of Science and Technology, asked for a moment of silence for Mr. Chow during a graduation ceremony Friday, and was seen wiping away tears before resuming the event.

The school’s student union held a moment of silence and a march on campus. Some demonstrators smashed a window and painted slogans on Mr. Shyy’s residence, calling on him to condemn the police. 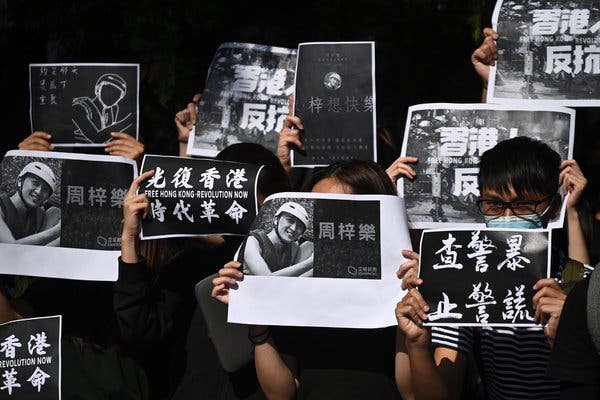 Others gathered for an impromptu memorial in the city’s Central district, where tempers flared after the arrival of police officers.

“Do you know you can’t wear masks at a rally?” a police commander said to a man in black, citing a ban on face masks that was enacted last month under an emergency powers law.

“This is a funeral, are you crazy?” another man was heard yelling back.

Memorial gatherings were held in the evening across the city, including at the parking garage in the Tseung Kwan O area where Mr. Chow fell. Violent protests later broke out, with protesters throwing bricks and a police officer firing a warning shot into the air in the Yau Ma Tei neighborhood.

The lawmaker Eddie Chu was arrested late Friday, and at least five other pro-democracy lawmakers were told by the police that they would be arrested in connection with scuffles in the legislature in May.

Those clashes were driven by anger over the now-withdrawn extradition bill that incited the protest movement, and the detention of the lawmakers added to the grievances of protesters on the streets.

Mr. Chow, 22, could be the first death as a direct result of the confrontations between the police and protesters. But what exactly led to his fall is still unclear.

Some protesters have speculated that tear gas or an effort to flee police officers were factors. But security camera video released Wednesday by the building owner did not show police officers or significant amounts of tear gas in the parking garage before Mr. Chow fell.Roger Tam, 21, a fourth-year H.K.U.S.T. science student, said he had been friends with Mr. Chow for the last three years, and they often spent time together playing video games like Grand Theft Auto. Mr. Chow played basketball and netball and was a “keen protester” who played close attention to the movement, Mr. Tam said. 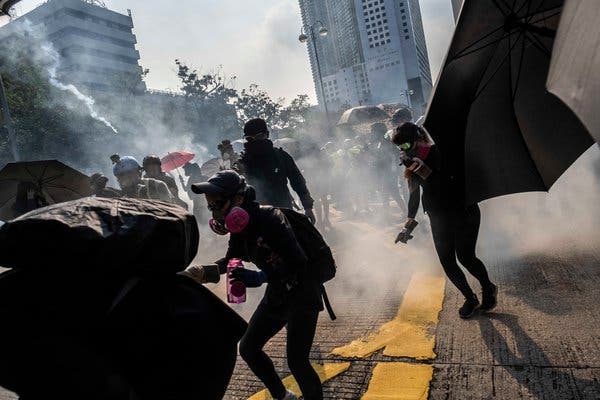 The news of Mr. Chow’s death brought a somber mood to the campus. Alvin Lee, 23, a H.K.U.S.T. student who graduated Friday, swapped his graduation gown for black clothes and a mask.

“We can’t possibly be in the mood to celebrate when such terrible things have happened to Hong Kong and when our schoolmate just died,” he said. “We want our school president to condemn the police and protect us, and we want justice for our dead schoolmate. Where is the truth?”

Carrie Lam, Hong Kong’s chief executive, said Tuesday that since the case of the student’s fall was still under investigation, she would not “haphazardly jump to conclusions.” She offered her “deepest sympathies” to him.

She also urged residents to stay away from the protests “in order to avoid unnecessary misunderstandings when the police are enforcing the law.”

Suzette Foo, a senior superintendent of the Hong Kong Police Force, said that the case will be handed over to the Coroner’s Court. She said the police were “heartbroken” at Mr. Chow’s death. “No one wants to see this tragedy happen,” she added.

She acknowledged on Friday that officers had been in the parking garage where Mr. Chow was found nearly an hour earlier than previously admitted. But it remained unclear what if any interactions he had with officers.

“The sole purpose was to disperse those protesters who had assembled, thrown hard objects and attacked the police in that area,” she said.

Video from i-Cable News, a Hong Kong broadcaster, showed the police firing rounds of tear gas up into an elevated parking garage from which protesters had thrown traffic cones down.

Ms. Foo said the point where the student fell was about 130 yards from where police officers fired tear gas that night. She did not deny the possibility that tear gas could have contributed to the incident, but said there was only a small amount in the air when rescuers responded.

She also denied that the police had interfered with emergency responders who were treating Mr. Chow or had barred an ambulance from reaching him.

An emergency responder, who spoke on condition of anonymity because of the sensitivity of the incident, said officers tried to make rescuers leave as they were treating the injured student. They also blocked an ambulance from approaching, the emergency responder said. Video of the scene showed that another ambulance eventually took Mr. Chow to a hospital.

Leung Kwok-lai, an assistant chief ambulance officer of the Fire Services Department, said Friday that the ambulance sent to aid Mr. Chow was blocked by buses and private vehicles, but that the ambulance “did not have any contact with the police on duty.”

In an email to students, Mr. Shyy, the university president, called for a “thorough and independent investigation” into Mr. Chow’s death. 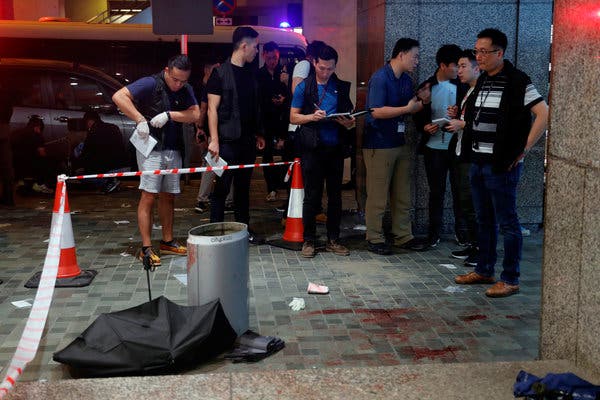 Police officers securing the scene where Andrew Chiu, a district council member, was attacked by another man who opposed the protests. Credit…Tyrone Siu/Reuters

“We demand clarifications from all parties — especially from the police, regarding the cause of the delay in those most critical moments that might have saved a young life,” he wrote. “We will be outraged if there is no acceptable explanation offered to us.”

At one mall in the Quarry Bay area of Hong Kong Island, a man apparently opposed to the protests slashed a man and a woman with a knife and bit off part of the ear of a district council member who attempted to restrain him. Bystanders beat the man before the police arrived.

Pro-democracy legislators said the district council member, Andrew Chiu, had surgery to reattach his ear on Monday. The man who was accused of attacking him was charged on Monday with assault causing actual body harm, the police said.

A man who attempted to stab Junius Ho, a pro-Beijing legislator, is being held on a charge of attempted murder, the police said Thursday.

Katherine Li and Elaine Yu contributed reporting. Austin Ramzy is a Hong Kong correspondent, focusing on coverage of the city and also of regional and breaking news. He previously covered major events around Asia from bases in Taiwan and in Beijing. @austinramzy