Source: NYT (10/23/19)
Overlooked No More: Sanmao, ‘Wandering Writer’ Who Found Her Voice in the Desert
阅读简体中文版 | 閱讀繁體中文版
Her book, “Stories of the Sahara,” has endured for generations of young Taiwanese and Chinese women yearning for independence from conservative social norms.
By Mike Ives and Katherine Li 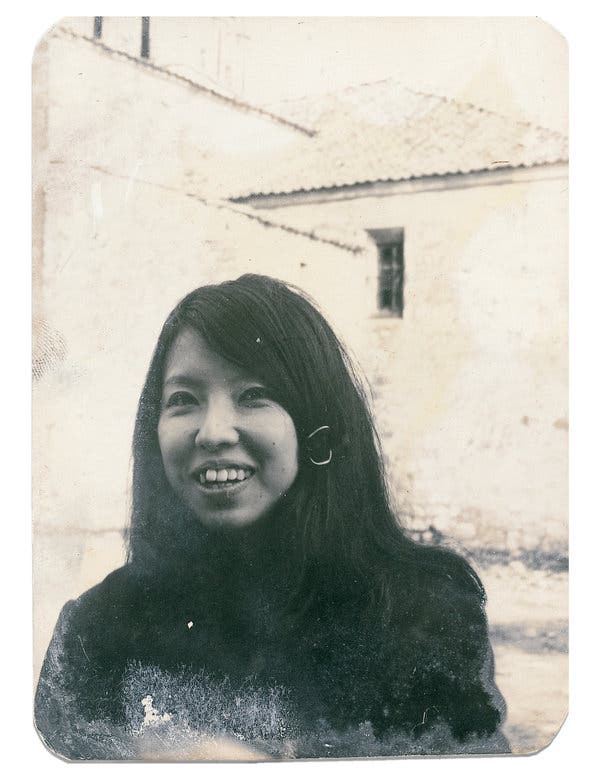 This article is part of Overlooked, a series of obituaries about remarkable people whose deaths, beginning in 1851, went unreported in The Times.

In the early 1970s, the Taiwanese writer Sanmao saw an article about the Sahara Desert in National Geographic magazine and told her friends that she wanted to travel there and cross it.

They assumed she was joking, but she would eventually go on that journey and write that the vast Sahara was her “dream lover.”

“I looked around at the boundless sand across which the wind wailed, the sky high above, the landscape majestic and calm,” she wrote in a seminal 1976 essay collection, “Stories of the Sahara,” of arriving for the first time at a windswept airport in the Western Saharan city of El Aaiún.

“It was dusk,” she continued. “The setting sun stained the desert the red of fresh blood, a sorrowful beauty. The temperature felt like early winter. I’d expected a scorching sun, but instead found a swathe of poetic desolation.”

It was one of many adventures she would have, and the books of essays and poetry she went on to write would endure among generations of young women in Taiwan and China who viewed her self-assured prose and intrepid excursions as glorious transgressions of local conservative social norms.

Sanmao died in 1991 after publishing more than a dozen books of essays and poetry, but she has not been forgotten. An account that publishes lines from her books on Weibo, a Twitter-like Chinese social media platform, has more than a million followers.

“The fact that she’s been able to endure this long in the Chinese literary imagination is something else,” said Fu, the assistant dean for global initiatives at the Parsons School of Design in New York.

One reason may be that her writing style resonates with a current generation that is accustomed to self-promotion and oversharing on Twitter and Instagram.

“Although ubiquitous in the contemporary age of social media and commercialized feminism, Sanmao’s unabashed self-aggrandizement and position of gung-ho empowerment was ahead of its time,” Sharlene Teo, a Singaporean novelist who lives in Britain, wrote in the introduction of the English edition of “Stories of the Sahara.”

At the same time, Teo wrote, her soaring self-confidence is frequently undercut by descriptions of her isolation, melancholy and “world weariness.”

The essays, which were originally published contemporaneously in a Taiwanese newspaper, paint a portrait of the native Sahrawis, a nomadic people who have lived in the desert for generations. The Sahrawis fought a decades-long armed resistance against the countries — Spain until the mid-1970s and then Morocco that administered the Western Sahara, a territory that stretches from Algeria and Mauritania in the east to the Atlantic coast in the west.

Sanmao became immersed in Sahrawi communities, and sometimes trained a critical eye on some of their customs. She reacted in horror, for example, to a traditional wedding ceremony in which the goal was to take a young bride’s virginity violently.

“That the ceremony had to conclude in such a way was deplorable and ridiculous,” she wrote in an essay called “Child Bride.” “I got up and strode out without saying goodbye to anyone.” 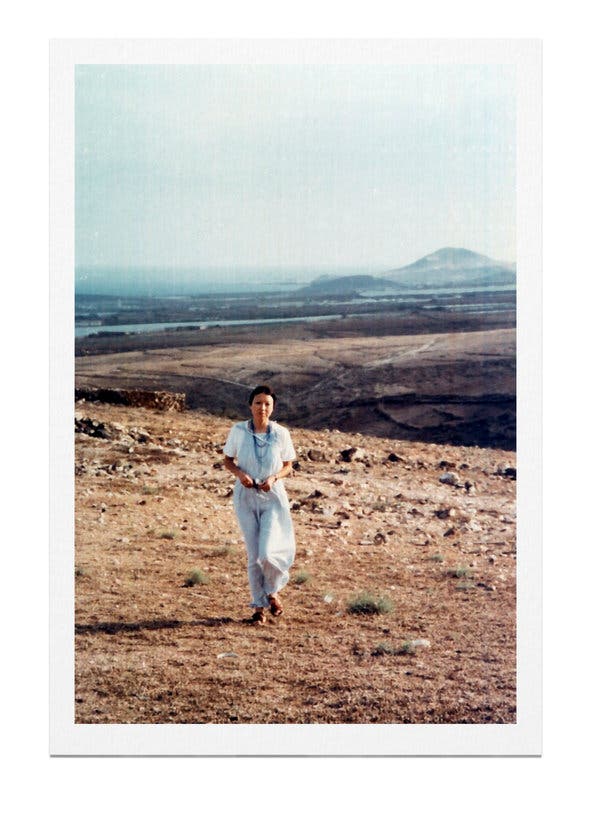 Sanmao on one of her many excursions. She often wrote of her life as a bohemian expatriate. Credit…Huang Chen Tien Hsin, Chen Sheng and Chen Chieh through Crown Publishing Company Ltd.

Other essays document Sanmao’s life as a bohemian expatriate. On her wedding day, for example, she treats her outfit as an afterthought as she throws on sandals and a hemp dress and pins a sprig of cilantro to her hat. Then she and her fiancé walk for nearly 40 minutes through the desert to a courthouse for the ceremony.

Her prose, which oscillates between memoir and fiction, has a laconic elegance that echoes the Beat poets. It can also be breezy, a remarkable quality at a time when her homeland, Taiwan, was under martial law in an era known as the “White Terror,” in which many opponents of the government were imprisoned or executed.

“She established a different and exotic place, a castle in the sand, for readers to enjoy,” said Carole Ho, a professor of literature at the Chinese University of Hong Kong. “At a time when materialistic enjoyments were pretty limited in Taiwan, she yearned for something different, and showed younger girls that it’s O.K. to be unique.”

Sanmao, who wrote under a pen name and sometimes went by Echo Chan, was born Chen Ping on March 26, 1943, during World War II, into a well-educated Christian family in Chongqing, a city in southwest China. Her father, Chen Siqing, was a lawyer, and her mother, Miao Jinlan, was a homemaker.

After the war, the family moved east to Nanjing, and shortly before Communist revolutionary forces triumphed in 1949, they fled to Taiwan.

Sanmao was a restless student who spent much of her time reading Chinese and Western literature, including “Gone With The Wind” and “The Count of Monte Cristo.”

One day in school, she wrote an essay about wanting to be a garbage collector so that she could roam the streets and find discarded treasures. When her teacher called the idea nonsense and made her start again, she doubled down — by writing that she wanted to be a Popsicle vendor.

After studying philosophy at Taiwan’s Chinese Culture University,Sanmao moved to Spain in 1967, later studied in Germany and worked briefly in the law library of the University of Illinois.

She met her future husband, José María Quero, when she was 24 and he was 16 and they lived in the same neighborhood.

She had studied philosophy, languages, literature,” Carmen Quero, José’s sister, told the Spanish newspaper El País in 2016 about meeting her. “We were fascinated by her. He fell in love with her at first sight.” 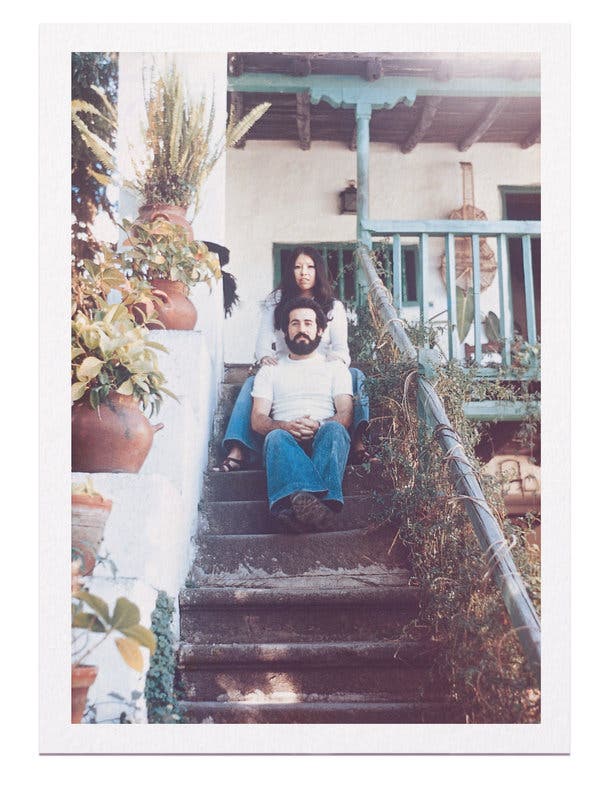 Sanmao with her husband, José María Quero. They met when she was 24 and he was 16. Credit…Huang Chen Tien Hsin, Chen Sheng and Chen Chieh through Crown Publishing Company Ltd.

They married in 1974 and settled in Spain’s Canary Islands, where Sanmao wrote the lyrics to “The Olive Tree,” a song popularized by the Taiwanese singer Chyi Yu:

Do not ask me where I’m from
My hometown is far away
Why do I wander around
Wandering afar, wandering

In 1979, the year the song was released, María Quero, a scuba diver and underwater engineer, died in a diving accident. Sanmao returned heartbroken to Taiwan in 1981.

“She gave love and passion to everyone, but José took away an important part of her,” Lucy Hsueh, a Taiwanese painter and one of her closest friends, said in a phone interview.

Sanmao spent part of the next decade teaching creative writing, becoming affectionately known as the “wandering writer.” Among other places, she traveled in Central and South America on a six-month travel writing assignment from United Daily News, the Taiwanese newspaper that had published her essays from the Sahara.

Sanmao returned to her birthplace on the Chinese mainland in April 1989. The trip inspired her to write the screenplay for “Red Dust,” a 1990 film about a love story set in Japanese-occupied Shanghai.

Sanmao died in a Taiwanese hospital on Jan. 4, 1991. She was 47. The death was ruled a suicide and prompted an outpouring of grief in Taiwan.

Some speculated that her heartbreak over losing her husband had been too much to bear.

“Her extra 12 years after José passed away were for her parents,” said Hsueh. “Perhaps she left us to attend a reunion she had long promised to attend.”

Sanmao had once written of doing just that. “Jose, you promised to wait for me on the other side,” she wrote in “The Immortal Bird,” a 1981 essay about her own mortality. “As long as I have your word, I have something to look forward to.”

Crown, Sanmao’s longtime publisher, released her collected works in 2010. More recently, the Canary Islands and the Western Sahara have become popular destinations for Chinese tourists. Some Chinese websites offer directions to the Saharan church where Sanmao was married, and to a nearby hotel called the San Mao Sahara.

One of her last books, “My Treasures,” is a collection of 86 short essays that celebrate clothing, jewelry, hand-decorated bowls and other objects that she had purchased during her travels.

In one essay, Sanmao pauses to analyze her own wardrobe, and lands on a metaphor.

“The jeans I was wearing were bought in Shilin, my boots were from Spain, my bag was from Costa Rica, and my jacket was from Paris,” she writes. “An international smorgasbord; and you could say they all united harmoniously and peacefully — and that’s exactly me.”