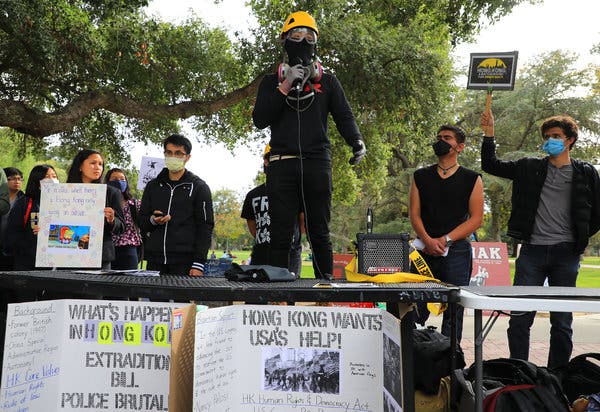 A student who attended protests in Hong Kong spoke at the University of California, Davis, this month. The conflict is spilling onto campuses across the U.S., highlighting rising tensions between students. Credit: Jim Wilson/The New York Times

For much of the year, Frances Hui followed the Hong Kong demonstrations from her dorm room at Emerson College, feeling guilty that she was safe in Boston while clashes grew increasingly violent for her fellow Hong Kongers.

But when she protested on campus in support of the movement this month, she did not expect to fear for her own well-being.

Students from mainland China, she said, confronted her with expletives and lewd gestures. Earlier, a classmate posted an op-ed she had written, titled “I Am From Hong Kong, Not China,” along with a Facebook comment: “Whomever opposes my greatest China, no matter how far they are, must be executed.”

As the protests in Hong Kong enter their 21st week, the conflict is spilling onto campuses across the United States and highlighting rising tensions between Hong Kong-born students and their classmates from mainland China. College officials face the challenging task of supporting free expression without alienating the largest demographic of international students on American campuses.

Schools in the United States have yet to report physical attacks, like one at the University of Queensland in Australia this summer. But solidarity protests and lectures have devolved into shouting matches. Pro-Hong Kong “Lennon walls,” covered with sticky notes and artwork, have been vandalized. And private conversations on and off campus have been painful and awkward.

At the University of California, Davis, students collecting signatures for a petition supporting a pro-Hong Kong congressional bill were confronted by classmates who grabbed their Hong Kong flag, broke the pole and threw it into the trash. Students also asked university administrators to cancel a rally organized by the Hong Kong group.

During family weekend this month at Brown University, an alumnus and a student confronted a professor at his lecture on the protests, accusing him of bias toward the Communist Party of China and suggesting that he was bankrolled by Chinese political groups.

At Emerson, Ms. Hui said an administrator had reached out to make sure she felt safe. But when she requested a public statement condemning the threats against her, none came.

“I understand that the school doesn’t want to take a political stance,” Ms. Hui said. “But you certainly shouldn’t stand for students who make threatening statements and hateful comments.”

Lee Pelton, president of Emerson College, said the university had contacted all the students involved to ensure Ms. Hui’s security. But he warned that school administrators needed to have “global competency” or risk the kind of firestorm that enveloped the National Basketball Association this month over a pro-Hong Kong tweet from an executive.

Students from Hong Kong say the values of the movement seem straightforward and ripe for campus support in the United States: democracy, freedom of expression, the right to protest. But given the sizable mainland Chinese populations at American universities — along with accusations that the protesters have incited violence and lawlessness — the question of how schools should address the issue has been anything but simple.

Of the 1.1 million international students in the United States, one-third come from China, according to the Institute of International Education. In the 2017-18 school year, over 360,000 were from the mainland and 7,000 from Hong Kong. International students typically pay full tuition, serving as a critical source of funds for universities: They contributed more than $30 billion to the American economy in the 2014-15 school year.

Joy Ming King, a senior at Wesleyan University, spoke last month as part of a panel on the protests, sharing his experience marching in Hong Kong this summer. More than 100 students packed the room. Days later, he read in Wesleyan’s campus newspaper that the university was exploring the opening of a satellite campus in China, in partnership with a Chinese corporation and a theater academy. The leader of the venture would be a Chinese Communist Party secretary.

“I came back to campus and found out my university’s administration is proposing to partner with the regime that my friends and family are being terrorized by,” said Mr. King, who later organized a rally opposing the project.

Michael Roth, president of Wesleyan and author of “Safe Enough Spaces,” said that “there isn’t just one student view about events in Hong Kong” and that he had met with students in recent weeks to discuss the protests and proposed campus.

While he shared many of the students’ concerns about the satellite campus, he said, he believed that the partnership could help political ties. “As our government’s relations with the Chinese government have deteriorated,” he said, “education is a crucial arena in which American institutions can engage with the citizens of this important country.”

But on Thursday, Mr. Roth sent an email notifying students that after a visit to Beijing and Taiwan this month he would not move forward with the project given concerns about academic freedom and “implications for our home campus.”

Some students from the mainland are sympathetic to the pro-democracy advocacy of their classmates. Kevin Zou, a senior at Princeton from Beijing, said he had recently met a classmate from Hong Kong at a party, and a friend had asked them both about the movement. Unsure what to say, Mr. Zou nervously said, “My people are oppressing your people.”

Sensing his classmate’s discomfort, Mr. Zou quickly dropped the subject. “It was sort of an awkward moment, and I could tell he wasn’t stoked on talking about it,” he said.

Mr. Zou said he longed for more nuanced conversations on campus about the protests, and worried that some Americans were backing the demonstrations only out of “militantly anti-China” sentiments. His own support came from a sense of pride seeing a historic pro-democracy movement led by people his own age.

“As an Asian kid in my 20s, it’s really cool to see what the protesters are doing,” Mr. Zou said. “It’s like the dead seriousness of authoritarianism countered by the subversive, goofball energy of these kids.”

Other mainland Chinese students do not share Mr. Zou’s sympathies. Rongcong Xu, an engineering graduate student at the University of Michigan, said his American classmates praised the pro-democracy movement without addressing its violent tactics. At a discussion group this month, he listened to his friends from Hong Kong share a rosy portrait of the movement and minimize the damage it has caused.

“They destroy the subway and threaten the lives of innocent citizens,” Mr. Xu said. “They throw rocks and set fires. The media in the United States hides the violence from most American citizens.”

As Mr. Xu’s family in China decided to stop making visits to Hong Kong because of reports of attacks on Chinese national tourists, he watched his classmates in Ann Arbor, Mich., sign petitions and attend events in support of the movement. He wondered, like other mainland students, whether the Hong Kong protesters were receiving support from the American government.

While both sides of the debate have been outspoken on campus, taking to campus quads and newspapers to share their views, mainlanders and Hong Kongers said they were more reluctant to bring the discussions home to their parents. The protests, they said, were taboo topics there. To Mr. Zou, that generational divide mirrored the political tensions at stake.

“It’s like the mainland is the conventional Asian parent who thinks everything must be controlled and dictated by the parent’s rules,” Mr. Zou said. “Hong Kong is like the rebellious punk kid who ran away from home.

“Now Hong Kong has matured and it’s this nightmare scenario for a mature adult state to be forced to live with its parents.”