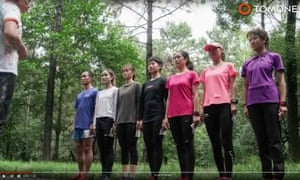 A Chinese orienteering team has been disqualified for cheating at the Military World Games in China.

Chinese runners in the middle-distance competition on Sunday initially came first, second, and fourth among the women and second among the men.

However, it was soon discovered that the runners had received illegal assistance from spectators and used markings and small paths prepared in the terrain that only their team was aware of, the International Orienteering Federation (IOF), whose rules govern the competition, said.

Competitors are meant to use only a map and compass to complete the course. IOF officials investigated the results after protests from rivals including Russia, Switzerland, France, Poland and Austria, and a jury decided to void the Chinese team’s results and ban them from other races. Organisers rejected an appeal from the Chinese athletes.

It is an embarrassing episode for China, which was hosting the sporting event for the first time. China built an athlete’s village for the 10-day event in Wuhan, and the country’s president, Xi Jinping, attended the opening ceremony.

Observers saw the event, which is held every four years for military athletes from around the world, as part of an effort to build closer ties between the People’s Liberation Army and other armies and bolster the Chinese military’s profile.

News of the disqualification was not widely reported in Chinese media on Thursday, in contrast to reports this week celebrating the team’s wins.