Source: NYT (10/11/19)
China’s Political Correctness: One Country, No Arguments
阅读简体中文版 | 閱讀繁體中文版
The Communist Party has spent decades preparing the people to defend a united homeland. Hong Kong’s protests show it has paid off.
By Li Yuan 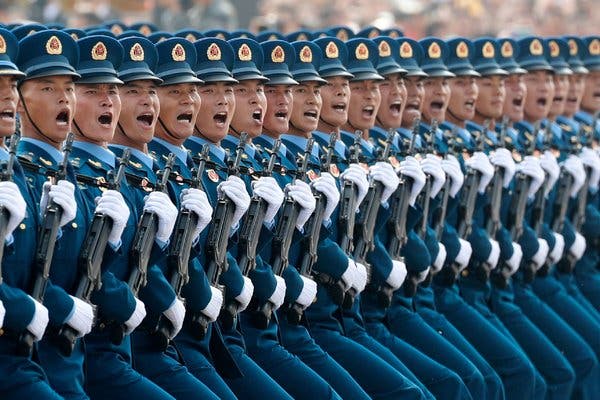 A military parade honoring the 70th anniversary of the founding of the People’s Republic of China was held in Beijing in October.CreditCreditWu Hong/EPA, via Shutterstock

Hong Kong’s protests have disrupted Yang Yang’s family life. Though the 29-year-old lives in mainland China, he was inspired by the demonstrations to write a song about freedom and upload it to the internet. When censors deleted it, he complained to his family.

They weren’t sympathetic. “How can you support Hong Kong separatists?” they asked. “How can you be anti-China?” His mother threatened to disown him. Before Mr. Yang left on a trip to Japan in August, his father said he hoped his son would die there.

Hong Kong’s protests have inflamed tensions in the semiautonomous Chinese city, but passions in the mainland have been just as heated — and, seemingly, almost exclusively against the demonstrators.

A pro-protest tweet by a Houston Rockets executive, Daryl Morey, ignited a firestorm of anger against the N.B.A., demonstrating the depth of feeling. Joe Tsai, the only N.B.A. owner of Chinese descent, said all of China — yes, more than one billion people — felt the same way.

“The one thing that is terribly misunderstood, and often ignored, by the western press and those critical of China is that 1.4 billion Chinese citizens stand united when it comes to the territorial integrity of China and the country’s sovereignty over her homeland,” he wrote. “This issue is non-negotiable.” 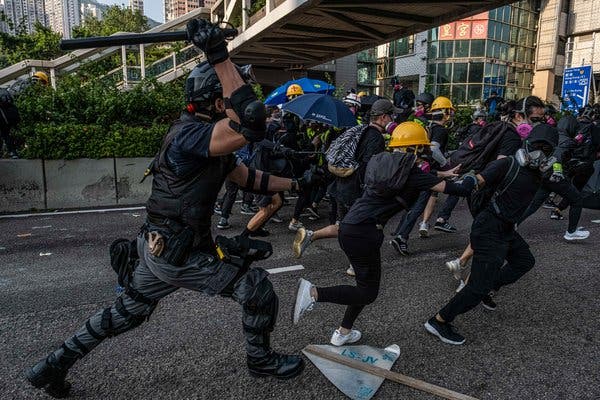 For Westerners, this is strange language. You don’t hear about the common feelings of 300 million Americans or 60 million Brits, especially in the era of Donald Trump and Brexit.

Yet, in China, there is some truth to it. Of course, it’s a vast country brimming with opinions. But the Communist Party has spent decades preparing the Chinese people for a moment like this. The stir over Hong Kong shows, in dramatic fashion, how successful it has been, and how the world could be shaped by it.

“As soon as the Communist Party pushes the patriotism button, Chinese will rise up like zombies to unite against the foreign forces, be it Japan or N.B.A.,” said Mr. Yang, the singer-songwriter. “They don’t always know why they’re against those things. In fact, many Chinese like Japan and the N.B.A.”

Until Thursday, when China’s internet minders dialed down the passions, the Chinese online world was filled with denunciations of the protests. Some Chinese people have even scaled the Great Firewall, China’s highly effective online censorship system, to post anti-protest messages on services like Facebook and Instagram that their own government doesn’t want them to see.

Their comments reflect a narrative that China’s top-down education system delivers from a young age. A united China, a country with a common purpose, can stand strong against outsiders, according to this narrative. A divided China could slip backward, losing decades of progress and plunging the country back into chaos.

Any Chinese person who has gone to elementary school or watched television news can explain the tale of China’s 100 years of humiliation. Starting with the Opium Wars in the 19th century, foreign powers bullied a weak and backward China into turning Hong Kong and Macau into European colonies. Students must memorize the unequal treaties the Qing dynasty signed during that period.

There’s even a name for it: “national humiliation education.”

This narrative glosses over a lot of history, including the cruelty of Mao’s revolution, the starving of millions during Mao’s Great Leap Forward and the madness of his decade-long Cultural Revolution. When it does include the 1989 crackdown on protesters in Tiananmen Square, the protest and its aftermath is mentioned in one sentence and portrayed vaguely as a political incident.

These lessons and propaganda sound crude, but they work. For years, I regarded Chris Patten, the last Hong Kong governor under the British rule, as “a sinner condemned by history.” That’s what state media called him, especially after he approved spending heavily to build Hong Kong’s new airport, leading to accusations of waste. Today, I regularly use that airport, a marvel of modern transportation, as do millions of others.

Of course, my friends and I watched with great pride Hong Kong’s handover ceremony from Britain to China in 1997. Territorial integrity achieved!

At the graduate school of journalism at Columbia University in 2002, one American student told me about his trip to Tibet. I was so incensed by his remarks that I blurted out, “Tibet is part of China!” 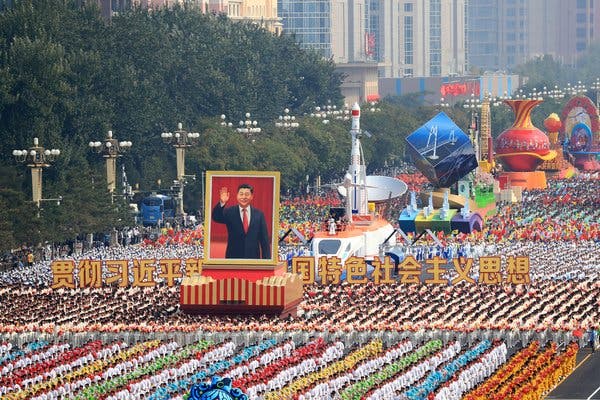 China commemorated the 70th anniversary of the founding of the People’s Republic of China in October with a grand military parade and mass pageant. Credit: How Hwee Young/EPA, via Shutterstock

For Westerners, perhaps one way to understand would be to read “Educated,” a memoir by Tara Westover about escaping her survivalist Mormon family in the mountains of Idaho. It has nothing to do with China. But her struggle to unlearn what her parents taught her felt familiar to me after I left China and began to learn its history on my own.

The rise of the internet and China’s opening were supposed to widen views there. Instead, the party is narrowing them more. Education officials over the past two years have been increasingly enforcing a widely ignored 2004 effort to make education even more Chinese focused.

In some middle school history books, the Cultural Revolution is described as “a detour in the Communist Party’s expedition,” rather than as a mistake. Some universities have replaced textbooks by Western academics such as Milton Friedman and N. Gregory Mankiw with books written under a program called “Marxist theory research and building project.”

Textbook publishers have cut back on essays by Lu Xun, a writerknown for his acerbic criticism of the nationalist government in the 1920s and 1930s. They were once a mainstay of school texts, but some Chinese people have used his articles to criticize current events. One, about how Chinese people should welcome criticism from foreigners, was posted on the social media platform Weibo this past week after the N.B.A. debacle, then was pulled down.

Already, China has become more effective at delivering its message to its people. Slogans that I learned without much conviction more than 30 years ago — like “Without the Communist Party, there would be no China” — are making a comeback. 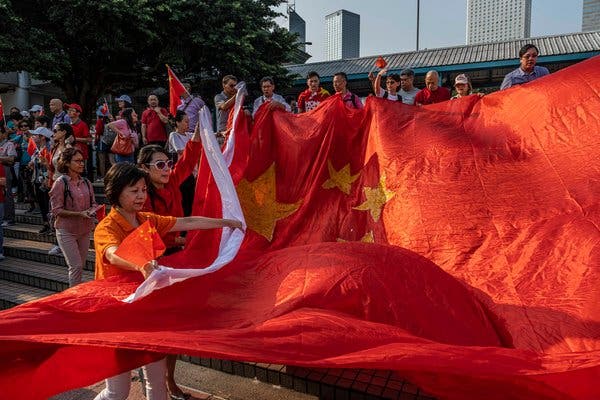 These lessons might seem removed from the situation in Hong Kong, where the protesters are mainly Chinese, not foreigners. But state media has portrayed the protests as foreign driven, sometimes identifying Western bystanders and journalists — including one working for The New York Times — as American instigators.

State media also portrays the protests as a push for Hong Kong independence from China, a direct effort to tap into those feelings of territorial integrity. That thought has echoed. Mr. Tsai, the N.B.A. owner, called the protests “a separatist movement.”

But only a fringe group of protesters support full independence from the mainland. The five core demands of the protesters don’t include it. It’s an important distinction, one that Mr. Tsai’s newspaper — The South China Morning Post, owned by Alibaba, the Chinese e-commerce giant where Mr. Tsai is executive vice chairman — is careful to make.

For China, the big danger is that it will become even more intolerant of criticism and different opinions.

A Chinese blogger wrote this week that a renovation project at a top Beijing middle school was causing widespread health issues, giving students bloody noses several times a day. The reaction was strong, and strongly against him. Many students told him there was nothing wrong with their school and even if there was, it was none of his business. “He should have shut his mouth just like N.B.A.’s Morey,” wrote one commenter.

Mr. Yang, the singer-songwriter, said “all hell broke loose” after his family and members of his band learned that he supported the Hong Kong protests. His younger brother told him he was sick in his mind. Former classmates castigated him online.

“The Hong Kong protests have definitely made them a lot more patriotic,” he said.

Over the years, he had tried to show people around him the videos of the Tiananmen Square crackdown and other events. His family told him that he should look at the brighter side of the history. The party has since provided education, jobs and pensions, they said.

“I feel as alone as an island,” he said. “I’m surrounded by very familiar strangers.”

Li Yuan writes the New New World column for The Times, which focuses on the intersection of technology, business and politics in China and across Asia.