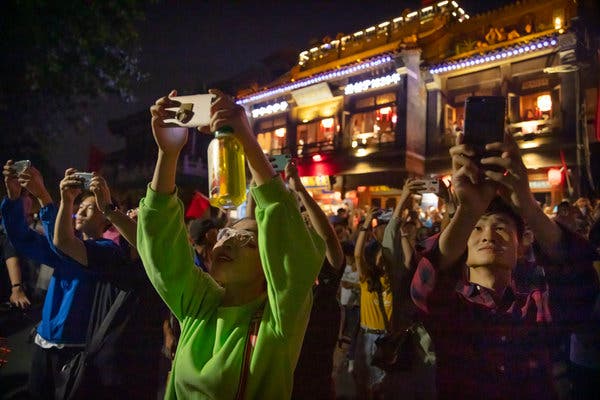 At the 70th anniversary celebration of the founding of the People’s Republic of China, in Tiananmen Square in Beijing, on Tuesday. Credit: Mark Schiefelbein/Associated Press

BEIJING — Attending China’s National Day celebrations over the years has been a bit like listening to different takes of a song, with the composer honing the themes and jettisoning the raw bits until the piece sounds just right.

That’s how I felt at Tuesday’s celebrations on Tiananmen Square, held to observe the 70th anniversary of the founding of the People’s Republic of China. I’ve attended two other ceremonies like this before — for the 35th anniversary in 1984 and the 50th in 1999 — and I knew the basic drill: There would be a big military parade followed by floats celebrating the government’s accomplishments.

But this show felt bigger and brassier than either of those, as if the composer had decided to use every instrument in the orchestra and cast subtlety aside. It was slick and sleek, but also overpowering and at times bombastic.

When I received my invitation, government officials told me that I was lucky to attend because it was such a great honor. I nodded politely but only really understood what they meant when I arrived at Tiananmen Square on Tuesday at 6 a.m. We media types were just a few hundred in a sea of loyal members of the Chinese Communist Party (C.C.P.), and for many of them it must have felt like one of the biggest events of their lives.

It would be easy to write these people off as extras. And 20 years ago, the last time I was at such an event, the people in attendance were mainly highly trained performers who held aloft placards that spelled out different messages, North Korea–style. But Tuesday’s crowd was different. It was made up of university professors, scientists, administrators, bureaucrats and people who had made some sort of contribution to the state. They weren’t props but excited participants who expected to remember this day.

I noticed that right away when I walked past a raised platform covered with artificial grass that surrounded a big television screen. People were crouching down next to the platform and neatly arranging their letter of invitation, parade-picture ID and program, almost all in the same fashion, like sacraments on a church altar. Then they would snap a picture, aiming their cameras so that China’s national symbol, the Gate of Heavenly Peace, appeared in the background. These were photos designed to be boasted about on social media: “Guess where I was today?” “Yes, at Tiananmen Square.” “Yes, at the ceremony.” And here is proof.

If these were their sacraments and this ceremony was their ritual, what then was their belief?

That would probably be the message broadcast on the giant screens that surrounded us. Before the parade began, those screens showed archival footage of the past 70 years presenting a story about how China had been poor and beaten down by outside powers until the Communist Party saved the country.

The Mao era wasn’t portrayed as foreign journalists and academics often depict it — a series of violent campaigns against imagined enemies of the state and the worst famine in recorded history — but as a period of pioneering glory, when China secured its borders for the first time in a century, built a heavy industrial base and set the stage for its economic takeoff.

Raised on this ideology, the attendees seemed visibly moved when soldiers carrying the national flag goose-stepped from the Monument to the People’s Heroes at the center of the square down to the enormous flagpole. I was unnerved by the background barrage of artillery and the amplified sound of the boots striking the pavement — it felt like an invasion of giants — but many people around me stood solemnly. This wasn’t stage-managed: Some looked bored, others gazed around, kids played. But many more looked earnest, just like Americans do when they stand up, hand on heart, for the national anthem at a sports event.

And I don’t think it was just for show that people jumped out of their seats at one of the early high points of the ceremony: when President Xi Jinping appeared standing in an open-top limousine driving out of the Gate of Heavenly Peace. The moment was pure theater, with Mr. Xi in a dark traditional suit appearing, framed by the vermilion walls of the imperial Forbidden City, as he set off to inspect the troops.

People also oohed and aahed at another signature moment that owed much to Peking Opera. When Mr. Xi passed the soldiers, their heads swiveled as if on sockets, their eyes bulging as they followed the nation’s most important person. It was a show of the armed forces’ unswerving allegiance to the C.C.P.’s leader, and the audience needed no encouragement to cheer.

Realizing that some of these emotions are genuine is important because we can’t understand China if we think the party only rules through the authoritarian methods that reporters understandably focus on. On my social media feed, which includes disgruntled intellectuals but also working-class practitioners of folk religion, it’s clear that many buy into the national story created by the C.C.P.

Inventing traditions is nothing new, nor unique to China. But here these constructs can sometimes feel uneasy because many of them are imported — from soldiers’ dress uniforms that seem decades out of date (gold braids, enormous epaulets, rows of medals) to soundtrack-like music worthy of John Williams (fanfares, kettle drums, plenty of brass).

I might be nostalgic, but the mood 35 years ago felt a bit different. I was a student then, and a group of us was bussed down to Tiananmen Square for the ceremony. We then milled around for most of the day. There was also an orchestrated event, but security was minimal and you could still stand right next to the performers as they marched or danced past. Some students even jumped into the parade and held up a banner greeting the paramount leader Deng Xiaoping.

China today is more serious about being a superpower. When the spontaneous enthusiasm flagged on Tuesday, cheerleaders made sure the flags kept waving. And security was so tight that it bordered on paranoia: Neighborhood parks around town implemented airport-style security to even enter. But that, too, was part of the spectacle, the message and the vision — of a focused and disciplined state, led by the Chinese Communist Party, that can put on a spectacle few countries can match.