Source: The New Republic (9/20/19)
“What About China?” Is a Bad Response to the Climate Crisis
Unlike Washington, Beijing has at least gestured at a national plan to fight global warming.
By DANIEL K. GARDNER 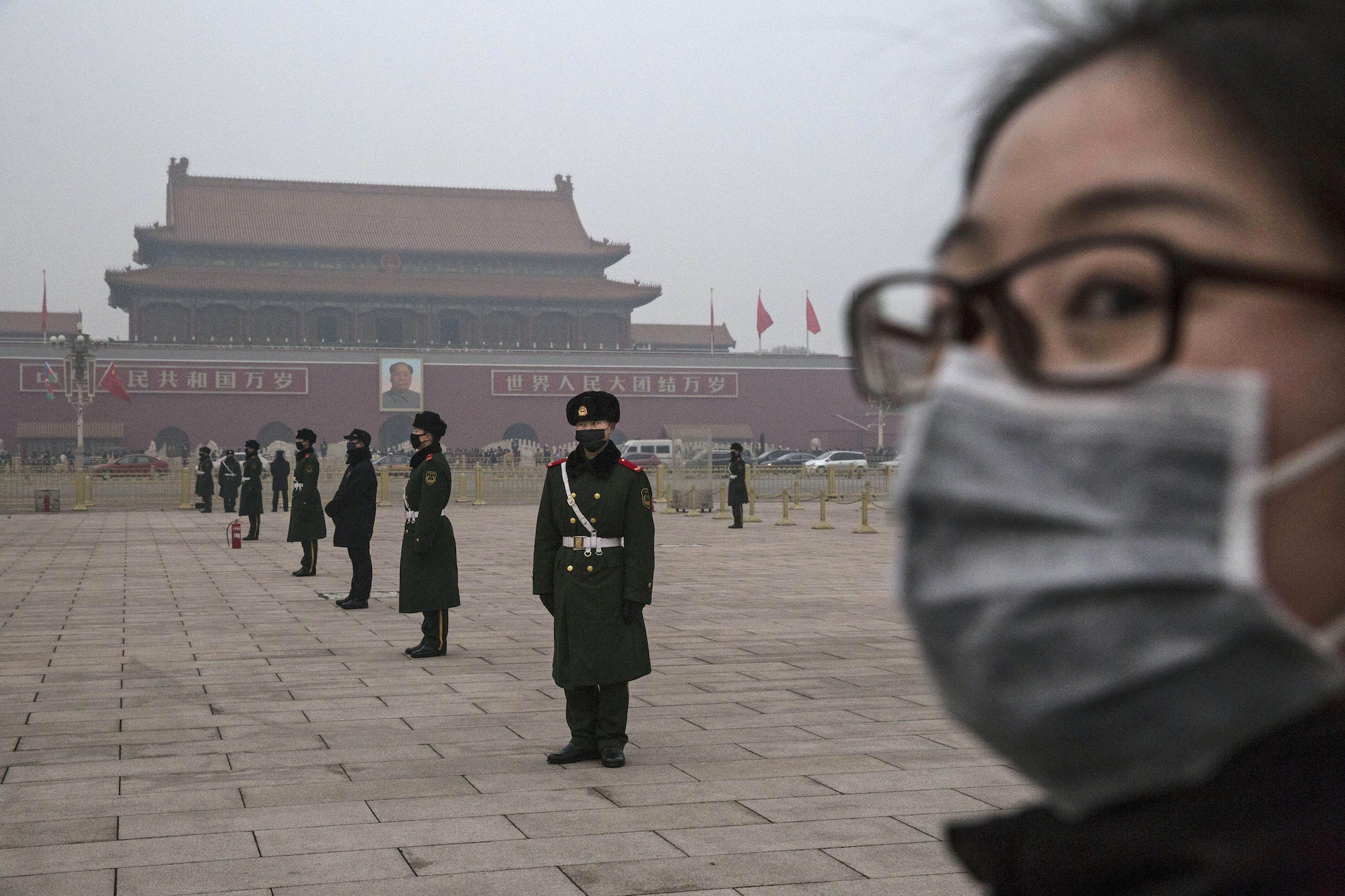 Whenever the subject of climate policy comes up in the United States, someone in the room, sooner or later, is sure to point out that China today emits more carbon dioxide than the U.S. What is China doing to tackle the climate crisis, they ask.

Together, China and the U.S. are responsible for a walloping 43 percent of the world’s total annual carbon emissions. If the world is to keep the planet from warming more than two degrees over pre-industrial levels, neither country can stay on the sidelines. But there’s a profound difference, so far, in how the two countries have approached the issue. In the U.S., public concern has driven government engagement with the climate. Prodded by an increasingly agitated and vocal public, Democratic politicians, including 2020 presidential hopefuls, are increasingly discussing a potential Green New Deal, and other plans to deal with the crisis. But what will come of any of this is anybody’s guess, and any meaningful, concerted action by Washington will likely have to wait until the current president leaves office. While individual climate-aware states and cities are helping to compensate, the national government remains in a holding pattern.

In China, it’s the other way around: Beijing, rather than the people outside of it, is taking the lead on environmental and climate reform. Since coming to power in 2013, President Xi has been calling on his countrymen to “build an ecological civilization.” Time to abandon the long-standing “pollute first, clean-up later” development model, he proclaims. And in the name of realizing this new ecological civilization, the Chinese government has pledged more than $1 trillion dollars in air, water, and soil cleanup plans, shuttered coal mines throughout the country, capped coal consumption, established a nationwide carbon trading system, poured hundreds of billions of dollars—more than any other country in the world by far—in renewable energy, and promoted the manufacture and sale of electric-vehicles. In short, building an ecological civilization is a party-sponsored, top-down movement—a campaign whose energy and momentum come from the country’s leaders. The Chinese response, whether despite, or more likely, even because of its environmental woes, has made American inaction all the more conspicuous.

Party leaders in Beijing are motivated by a combination of national interest and political self-interest. Air and water pollution have spiraled out of control since 2000: Beijing and Shanghai’s smog problems are notorious. Recent scientific research has made people aware of the dire health effects of breathing toxic air and drinking polluted water. Some of those people have taken to the streets to express opposition to plans to build paraxylene chemical factories, coal-fired power plants, waste-incineration plants, pipelines carrying toxic wastewater, and industrial parks.

Others have even fled the country. Surveys report that more than 60 percent of Chinese with a net worth of $1.5 million have either left the country or plan to leave, with survey subjects citing education and the environment as the top two reasons. And, of course, pollution takes a toll on GDP, a figure the party keeps close watch on. Reasonable estimates of the precise cost range, depending on the metric used, from 3.5 to 15 percent or so of the GDP. The country can ill afford this sort of hit when the annual GDP growth has slowed from 10 percent to under 6.5 percent in the past few years. Finally, there is cost to China’s international reputation. China wants to be viewed as fully modern, as a global leader; cities shrouded in a soupy smog, rivers littered with trash and dead fish, and lakes filled with emerald-green algae are not the images Chinese leaders want to convey to the world.

China still consumes as much coal as the rest of the world combined and emits more carbon than any other country. But its present resolve to change environmental course seems quite real. And however reprehensible the world may find Beijing’s politics these days—be it the mass incarceration of Uighurs, human rights abuses, or the suppression of free speech—the success of their ecocivilization campaign is in everyone’s interest. We should be cheering Beijing on environmentally, especially as Washington remains inactive, even hostile to environmental action. And especially since the barriers to China’s success are formidable.

Perhaps the overriding challenge facing Beijing involves striking the right balance between environmental protection and economic development. The Communist Party (CPC) has long had a bargain with the Chinese people: If the people agree to support one-party rule by the CPC, the Party, in turn, will ensure their economic prosperity. Economic prosperity has been the pillar of the Party’s legitimacy. And so, when the economy slows, as it has, the Party is expected to bolster it; when unemployment rises, the Party is pressed to create jobs. In 2016, as the economy was sputtering, the most efficient way to prop it up and to create jobs was to stimulate heavy industry—and, in fact, to reopen many of the steel mills and cement factories that had been ordered shut earlier in the year. It provided a salve for the economy but, as Greenpeace and other organizations in China reported, it also led to an upsurge in air pollution—undermining the progress Beijing had been making in fighting smog in north China. Such compromises may only grow more frequent, given that the Chinese economy in coming years is expected to grow far more slowly than it has for the past three decades.

Another obstacle—ironically, of Beijing’s own doing—is its “new urbanization plan,” which aims to move 250 million rural dwellers into cities between 2015 and 2025, and an additional 50 million between 2025 and 2030. Within the span of 15 years, the rough equivalent of the entire population of the U.S. will be added to China’s urban ranks, in an attempt to strengthen the country’s slowing economy. Cities, the plan argues, offer better educational and job opportunities, resulting in higher salaries and greater disposable income for the migrants. These new urbanites will then spur domestic consumption.

Economically, the urbanization plan appears reasonable enough. But its potential environmental consequences are deeply worrisome. China today has to feed 20 percent of the world’s population with only 7 percent of its arable land. Urban expansion threatens to gobble up the country’s scarce arable land. Already, in the past two decades, large swaths of fertile agricultural land in periurban areas have been lost to the sprawl of cities. If China is to remain “food secure”, it’s essential that the remaining arable land be protected.

Even supposing the arable land is successfully preserved, the likely consequences of this rushed and massive march into cities include a steep increase in demand for new housing, large household appliances, and air conditioning and heating systems; the construction and expansion of city transportation networks and roadways; a rise in bus, subway, and automobile use; a higher concentration of sewage, wastewater discharge, and solid waste; and greater draw on the country’s severely limited water supplies (city dwellers in China use more than twice as much water per capita as the rural population). The images that come to mind—sprawl, cars, congestion, contaminated and scarce water, and polluted air—need not be inevitable outcomes of Beijing’s urbanization policy, but sidestepping them will not be easy.

Beijing also expects that this new urbanization will spawn a larger, more vibrant Chinese middle class. But the past decade or two is an indication that a growing middle class in China means far higher levels of consumption—with its attendant waste and pollution.

China today has already become the world’s largest auto market, luxury goods market, e-commerce market, and mobile phone market. Some 90 percent of Chinese families own their own homes. And Chinese spend more on travel abroad annually than any other people. McKinsey and others estimate that by 2022, 75 percent of China’s urban households will be middle and upper-class; and by 2030, 75 percent of the entire country will be middle-class. Can China’s environment, indeed the global environment, sustain the consumption habits of one billion middle class Chinese?

In calling for a new ecological civilization, China has set itself an ambitious agenda. It will not be readily realized. But China, at least, is in the climate game and moving forward. Success will depend on how effectively Beijing reconciles competing goals: economic prosperity, urban growth, and the expansion of the middle class on the one hand and the realization of an ecological civilization on the other. It’s past time for the U.S. to step up. Waiting until 2020 is irresponsible enough, but continuing the inaction until 2024 would be inexcusable. Right now, the world’s two largest emitters stand in unsettling mirror image to one another. One, taking advantage of an authoritarian system, has proclaimed a plan that its logistical constraints and quiet political vulnerabilities may derail. The other, a democracy, seems incapable of listening to what its people increasingly claim to want—and what its economic resources and scientific know-how would position it especially well to deliver.

Daniel K. Gardner is a professor at Smith College, a visiting research collaborator at the Princeton Environmental Institute, and the author, most recently, of Environmental Pollution in China: What Everyone Needs to Know.