For over 400 years, the Ming-era novel Jin Ping Mei – known in English as The Golden Lotus – has been celebrated by some readers as a literary masterpiece, while others condemn it as a salacious influence. Chronicling the life of a decadent merchant named Ximen Qing in the Song dynasty, the book’s notoriety comes from its graphic descriptions of sex, covering everything from adultery to sado-masochism. As Ximen rises up the social hierarchy, his lust for power and sex becomes increasingly depraved. Over the course of the story, he takes six wives and numerous concubines and servants, before eventually dying during the passionate raptures of sex from an overdose of aphrodisiacs.

For the novel’s frank treatment of sex, some of its critics have considered the novel nothing more than pornography. Since the Qing dynasty, Jin Ping Mei has been repeatedly banned and bowdlerized, with even its first English translator taking care to put the dirtiest parts into Latin. Despite its reputation, it’s unfair to dismiss the book as pointless porn. At over 3,000 pages, it’s a colossal portrait of everyday life in its Song-era setting, recording even the most mundane details of its hundreds of characters. (By one count, in fact, the sex scenes barely make up 3 percent of the novel.) What’s more, the moral of Jin Ping Mei is a criticism of Ximen Qing’s behavior, with some defenders reading it as an allegory for the excesses of the Ming elites of the day.

Regardless, it’s probably due to the book’s sexual themes that its author never claimed public credit for his work. Even though Jin Ping Mei is the most infamous novel in Chinese literature, nobody actually knows who wrote it. The author is only known as Lanling Xiaoxiao Sheng, a pseudonym translated as “The Scoffing Scholar of Lanling”. Lanling is a township in Shandong province, and some academic sleuths have taken the pseudonym as a clue to the author’s identity. With this in mind, using evidence from the text – including its vocabulary and literary references – scholars have come up with a number of candidates for the authorship of Jin Ping Mei.

Traditionally, the scoffing scholar has been presumed to be an aristocrat or famous writer from the late Ming dynasty. Legend has it that the scholar’s novel, with its portrayals of corruption and vice, was meant to be a form of revenge against an enemy government official. While there’s no clear consensus about when Jin Ping Mei was written, the usual estimates are during the reign of the Jiajing Emperor (1521-1567) or the reign of the Wanli Emperor (1572-1620). At any rate, a reference to the book’s unfinished manuscript can be found from 1595, and the earliest recorded complete edition was printed in 1618.

One of the most commonly named suspects is Li Kaixian (1502-1568), an official and playwright from Shandong. Aside from his birthplace, another connection between Li and Jin Ping Mei is the novel’s extensive quoting from his play Baojianji, written in the 1530s. A later (and more eccentric) culprit is the influential painter Xu Wei (1521-1593). Xu – who attempted suicide nine times and even killed one of his wives – also wrote poetry, prose and plays. The sinologist Arthur Waley saw similarities between Xu’s poetry and the novel’s poems, but never looked too deep into this theory. 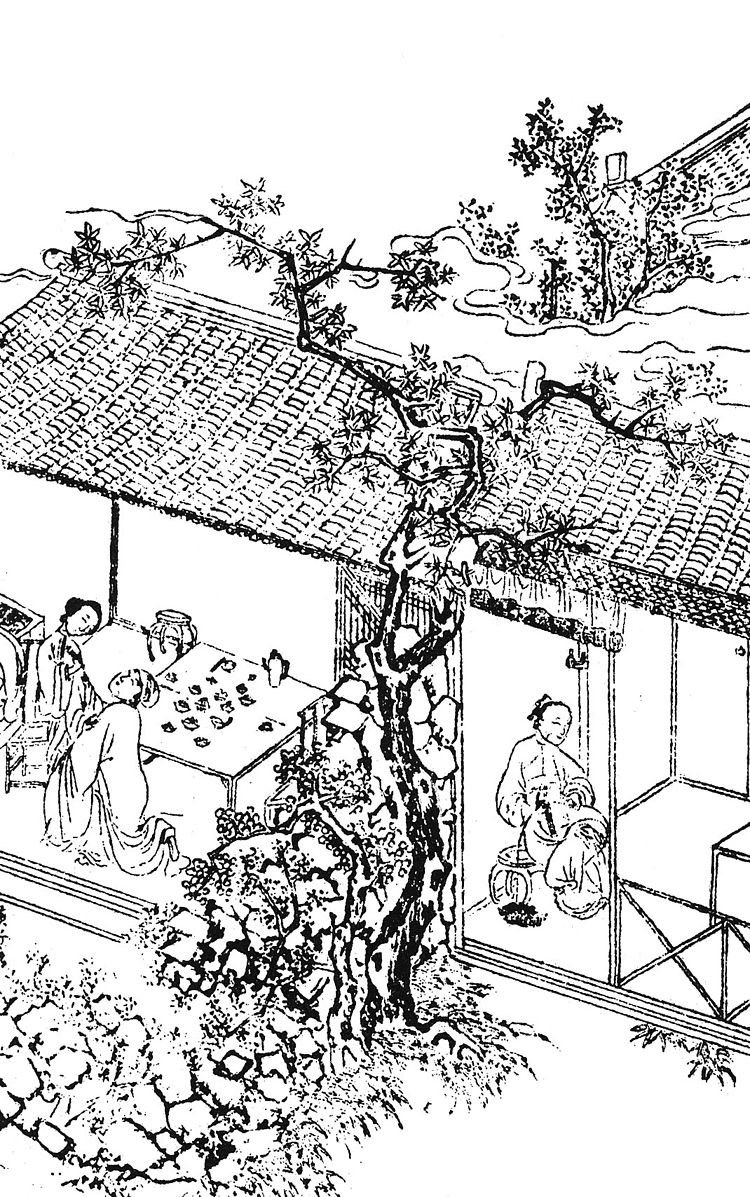 Illustration from the 1617 edition of Jin Ping Mei (Wikicommons)

The first person to ever translate the entirety of Jin Ping Mei into English, University of Chicago professor David Tod Roy, also has a compelling theory of his own. In a 1986 article entitled The Case for T’ang Hsien-Tsu’s Authorship of the Jin Ping Mei’, Roy singled out legendary playwright Tang Xianzu (1550-1616) as the likely author of the novel. Although Tang was from Linchuan, in Jiangxi province, Roy believed “The Scoffing Scholar of Lanling” was an allusion to Xunzi, an ancient philosopher Tang admired. Studying references in the novel, Roy found that Tang quoted in his work from some of the same poems and texts mentioned in Jin Ping Mei.

Granted, some of these quoted texts were popular during the Ming dynasty, but another strong point in Roy’s theory is the connection between Tang and many of the people known to have read Jin Ping Mei before it was published. Roy lists seventeen names connected to the novel’s manuscript, all of whom either counted Tang as a friend, or were familiar with him. From December 1594 until March 1595, Tang had stayed in Beijing. Around the same time and place, Tang’s friend Dong Qichang is known to have received the earliest mentioned copy of Jin Ping Mei, which at that time was unfinished. Considering that Tang died in 1616, two years before the first printing of the complete Jin Ping Mei, it’s possible he only wanted the book published posthumously.

In more recent years, professor Xu Yongming of Zhejiang University has advanced the case for a more obscure figure still. In his 2011 paper ‘A New Candidate for Authorship of the Jin Ping Mei: Bai Yue 白悦 (1499-1551)’, Xu suggests that writer and official Bai Yue might have been Jin Ping Mei’s author. Bai was born in Wujin, Jiangsu, an area during the Liang Dynasty that once had a town named Lanling. While scholars have traditionally assumed that the Lanling in Lanling Xiaoxiao Sheng refers to the township in Shandong, Xu proposes that the correct location was Jiangsu’s Lanling. Even though the novel is set in a fictional town in Shandong, and uses words from the Shandong dialect, Xu attributes this to the fact that Bai’s father once held a position in the province, making it likely that a young Bai lived with him for a time, picking up local vocabulary.

Another important clue might be Bai’s relationship with the politician Xu Jie (1512-1578). The Ming writer Shen Defu once reported that in 1606 he discovered a man named Liu Chengxi had a complete edition of Jin Ping Mei, and that – for reasons not elaborated – Liu’s copy was imagined to have come from Xu Jie. Xu Jie wrote an obituary for Bai Yue, indicating that the men must have been close. If Xu Jie really did possess a finished manuscript before Liu Chengxi, Xu Yongming argues, then the book must have been written during the Jiajing period, too early for Tang Xianzu to be the author.

Given that researchers have only the author’s pseudonym and Jin Ping Mei itself to work with, the scholarship to come out of the search for Lanling Xiaoxiao Sheng has been impressive. We will probably never be able to put a face to the author’s false name, but all of the research has not been in vain. As Xu Yongming notes in his article on the subject, “even if the search for the true author of Jin Ping Mei is ultimately fruitless, the investigation is sure to uncover new knowledge about late-Ming literature, history, and of course the novel itself.”  ∎