A riot police officer in the Mong Kok area of Hong Kong on Friday. Credit: Lam Yik Fei for The New York Times

BEIJING — China’s leader, Xi Jinping, warned a gathering of senior Communist Party officials in January that the country faced a raft of urgent economic and political risks, and told them to be on guard especially for “indolence, incompetence and becoming divorced from the public.”

Now, after months of political tumult in Hong Kong, the warning seems prescient. Only it is Mr. Xi himself and his government facing criticism that they are mishandling China’s biggest political crisis in years, one that he did not mention in his catalog of looming risks at the start of the year.

And although few in Beijing would dare blame Mr. Xi openly for the government’s handling of the turmoil, there is quiet grumbling that his imperious style and authoritarian concentration of power contributed to the government’s misreading of the scope of discontent in Hong Kong, which is only growing.

On Friday night, the protests and clashes with the police continued in Hong Kong, even after the region’s embattled chief executive, Carrie Lam, made a major concession days earlier by withdrawing a bill that would have allowed the extradition of criminal suspects to the mainland, legislation which first incited the protests three months ago.

The Communist Party’s leadership — and very likely Mr. Xi himself — has been surprised by or oblivious to the depth of the animosity, which has driven hundreds of thousands into the streets of Hong Kong for the past three months. While it was the proposed extradition bill that sparked the protests, they are now sustained by broader grievances against the Chinese government and its efforts to impose greater control over the semiautonomous territory.

Beijing has been slow to adapt to events, allowing Ms. Lam to suspend the bill in June, for example, but refusing at the time to let her withdraw it completely. It was a partial concession that reflected the party’s hard-line instincts under Mr. Xi and fueled even larger protests.

As public anger in Hong Kong has climbed, the Chinese government’s response grew bombastic and now seems at times erratic. 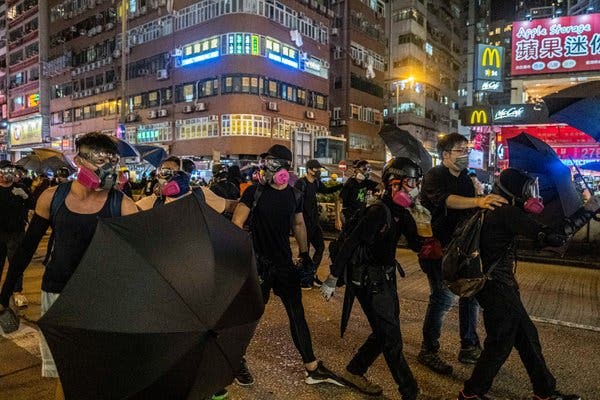 In July, at a meeting that has not been publicly disclosed, Mr. Xi met with other senior officials to discuss the protests. The range of options discussed is unclear, but the leaders agreed that the central government should not intervene forcefully, at least for now, several people familiar with the issue said in interviews in Hong Kong and Beijing.

At that meeting, the officials concluded that the Hong Kong authorities and the local police could eventually restore order on their own, the officials said, speaking on condition of anonymity to discuss internal deliberations.

There are hints of divisions in the Chinese leadership and stirrings of discontent about Mr. Xi’s policies.

Jean-Pierre Cabestan, a political science professor at Hong Kong Baptist University and an expert on Chinese politics, said it appeared that there was debate during the annual informal leaders’ retreat in Beidaihe, a seaside resort not far from Beijing.

Some party leaders called for concessions, while others urged action to bring Hong Kong more directly under the mainland’s control, he said. Mr. Cabestan said he believed that “the Chinese leadership is divided on Hong Kong and how to solve the crisis.”

Wu Qiang, a political analyst in Beijing, said Mr. Xi’s government had in effect adopted a strategy to procrastinate in the absence of any better ideas for resolving the crisis. “It is not willing to intervene directly or to propose a solution,” he said. “The idea is to wait things out until there is a change.”

The upshot is that instead of defusing or containing the crisis, Mr. Xi’s government has helped to widen the political chasm between the central government and many of the seven million residents in a city that is an important hub of international trade and finance, critics say.

Another sign of the disarray within the government was the reaction to Ms. Lam’s withdrawal of the bill. On Tuesday, officials in Beijing declared there could be no concessions to the protesters’ demands. A day later, when Ms. Lam pulled the bill back, she claimed to have Beijing’s blessing to do so. The same officials were silent. 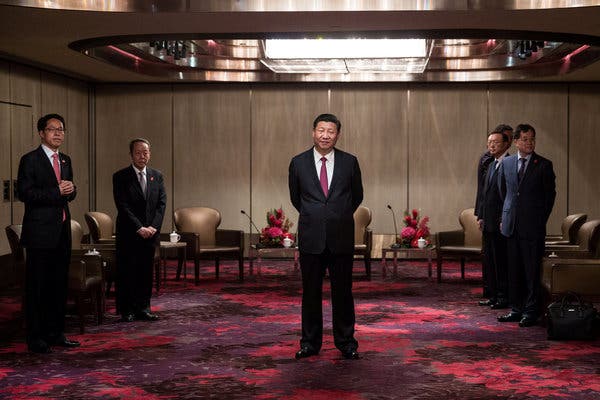 Xi Jinping during a visit to Hong Kong in 2017, as the city commemorated the 20th anniversary of its handover to China from Britain. Credit: Pool photo by Dale De La Rey

On Friday, China’s premier, Li Keqiang, said during a news conference with Chancellor Angela Merkel of Germany, who was visiting China, that the government supported Hong Kong in “halting the violence and disorder in accordance with the law.”

Mr. Xi, who is 66 and in his seventh year of his now unlimited tenure as the country’s paramount leader, has cast himself as an essential commander for a challenging time. He has been lionized in state media like no other Chinese leader since Mao.

This has made political solutions to the Hong Kong situation harder to find, because even senior officials are reluctant to make the case for compromise or concessions for fear of contradicting or angering Mr. Xi, according to numerous officials and analysts in Hong Kong and Beijing.

The tumult in Hong Kong could pose a risk to Mr. Xi, especially if it exacerbates discontent and discord within the Chinese leadership over other issues.

“I think the danger is not that his standing will collapse, but that there is a whole series of slowly unfolding trends that will gradually corrode his position,” said Richard McGregor, a senior fellow at the Lowy Institute in Sydney and author of “Xi Jinping: The Backlash.”

“Hong Kong is one, as the protests look set to carry on despite the concessions,” Mr. McGregor said. “The trade war is adding to the pain,” he added, referring to the current standoff with the United States.

Mr. Xi returned on Tuesday to the same venue as his speech in January — the Communist Party’s Central Party School — and reprised the warnings he raised in January without suggesting they were in fact worsening. 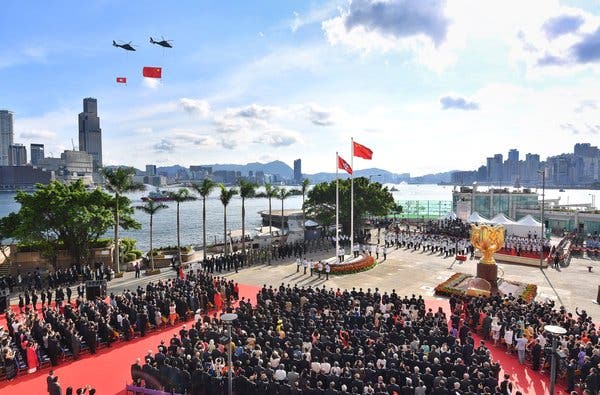 A 2017 ceremony in Hong Kong marking the anniversary of the handover. Mr. Xi has not visited the city since. Credit: Hong Kong’s Information Services Department

“Faced with the grim conditions and tasks of struggle looming down on us, we must be tough-boned, daring to go on the attack and daring to battle for victory,” he said.

While he warned of “a whole range” of internal and external threats — economic, military and environmental — he mentioned Hong Kong only once, and then only in passing.

“By painting a dark picture of hostile foreign forces or even unrelenting internal challenges the Communist Party faces in retaining power, it helps justify his continuing strong hand,” said Christopher K. Johnson, a senior fellow at the Center for Strategic and International Studies in Washington.

Some analysts see a parallel between Mr. Xi’s handling of Hong Kong and the trade war with the United States, which, like the economy more broadly, seems to be the greatest worry for his government at the moment.

In Hong Kong, Mr. Xi’s government unwaveringly supported the extradition bill. And it stuck by that position, refusing to allow Mrs. Lam to withdraw it formally, even as the protesters’ demands grew broader. Her pledge to withdraw it now has been dismissed as too little, too late.

In the trade talks, China also balked at accepting President Trump’s initial demands for concessions. When the two sides came close to an agreement in the spring, outlined in an 150-page document, Mr. Xi appeared to balk, scuttling the process.

Now Mr. Xi faces an even bigger trade war, with much higher tariffs and greater tensions. The government appears to be hewing to a strategy of waiting out Mr. Trump, possibly through his 2020 re-election campaign, even as the dispute has become a drag on the economy.

It remains unclear how Mr. Xi’s government conveyed its approval for Mrs. Lam’s decision — or whether it did. Mrs. Lam’s sudden shift evolved in a matter of days after another weekend of clashes between protesters and the police, several officials said. 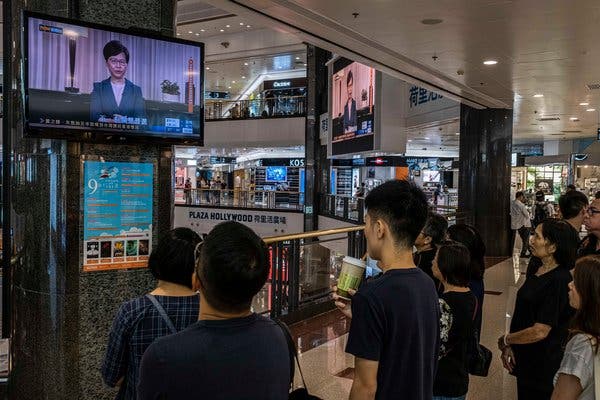 Hong Kong’s embattled chief executive, Carrie Lam, withdrew the bill that sparked the protests and said she had Beijing’s blessing to do so. Credit: Lam Yik Fei for The New York Times

Mrs. Lam said the decision to withdraw the extradition was hers, but she also asserted that she had Beijing’s full support for doing so, suggesting more coordination than either side has publicly acknowledged.

The silence from officials and in state media about Mrs. Lam’s concession suggested that if Mr. Xi’s government did approve of the sudden shift, it wanted to stifle public discussion of it in the mainland.

Mrs. Lam herself described the tightrope she must walk during recent remarks to a group of business leaders that was subsequently leaked and published by Reuters.

She also offered a candid assessment of Beijing’s views, even if one she did not intend to make public. She said Beijing had no plan to send in the People’s Liberation Army to restore order because “they’re just quite scared now.”

Hong Kong’s unique status, with its own laws and freedoms, has long created a political dilemma for China’s leaders, especially for Mr. Xi, who has made China’s rising economic and political might a central pillar of his public appeals.

China’s recovery of sovereignty over the former British colony is a matter of national pride that reversed a century and a half of colonial humiliation. But the mainland maintains what amounts to an international border with Hong Kong. 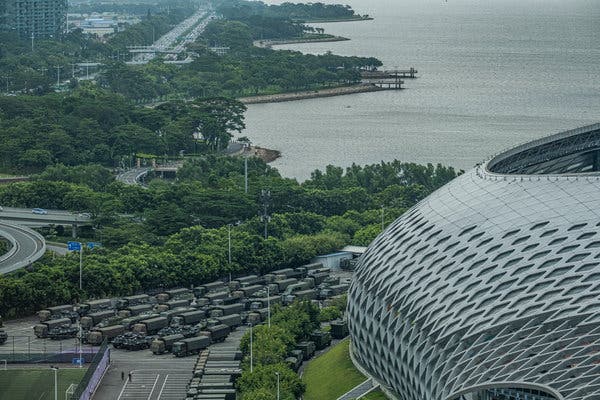 The government’s deepest fear now appears to be that the demands for greater political accountability and even universal suffrage heard on the streets in Hong Kong could spread like a contagion through the mainland. So far, there have been few signs of that.

As the crisis has grown, the government has dispatched thousands of troops from the People’s Armed Police to Shenzhen, the mainland city adjacent to Hong Kong, but the exercise was hastily organized and used an outdated plan drawn up after the protests in 2014, according to one official in Hong Kong.

Beijing also stepped up its propaganda, launching an information — and disinformation — campaign against the protesters and opposition leaders in Hong Kong.

Mr. Xi continues to barely mention Hong Kong. He has said nothing about the protests, even in his passing reference on Tuesday. He has not visited since 2017, when he marked the 20th anniversary of the handover from Britain.

After the traditional August holiday break, Mr. Xi’s public calendar of events has since betrayed no hint of political upheaval or threats to his standing. The media’s portrayal of him, already verging on hagiography, became even more fawning. State television and the party’s newspapers now refer to him as “The People’s Leader,” an honorific once bestowed only on Mao.

“The People’s Leader loves the people,” The People’s Daily wrote after Mr. Xi toured Gansu, a province in western China.

Mr. Xi’s calculation might be simply to remain patient, as he has been in the case of President Trump’s erratic shifts in the trade war. In his remarks on Tuesday, Mr. Xi also gave a possible hint of the government’s pragmatism.

“On matters of principle, not an inch will be yielded,” he said, “but on matters of tactics there can be flexibility.”