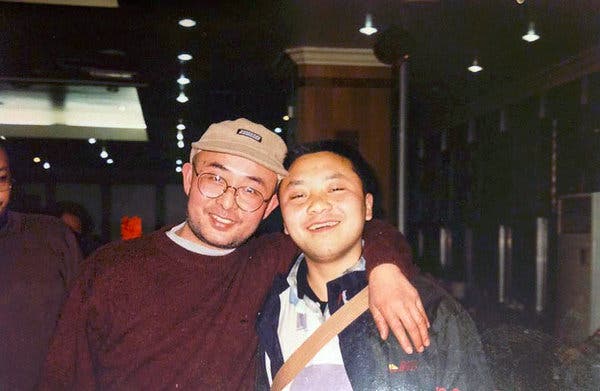 An undated photograph of Yang Wei, right, with the exiled author Liao Yiwu. Mr. Liao has said that Canada would be “aiding and abetting the trampling of human rights” by deporting Mr. Yang. Credit: via Liao Yiwu

BEIJING — Canada has deported a veteran Chinese dissident, Yang Wei, on the grounds that he is a danger to the public.

Despite written testimony stating that Mr. Yang, 49, had mental health problems and faced certain prison time if sent back to China, a court issued a final ruling on Monday that Mr. Yang should be put on a plane departing Toronto on Wednesday afternoon, and arriving in Beijing on Thursday.

In making its ruling, the court relied on a document, reviewed by The New York Times, that mainly evaluated whether Mr. Yang would receive adequate care in China and brushed off concerns about his work as a dissident, saying there was no proof he would face incarceration if he returned.

Adam Wawrzkiewicz, a lawyer who was involved in an 11th-hour attempt to prevent Mr. Yang’s deportation, said that the government had justified the deportation on the grounds that Mr. Yang had been deemed a threat to public safety. Under Canadian law, that can override concerns that the forcible return of a refugee or asylum seeker could lead to his or her persecution. Mr. Yang had been arrested repeatedly, including for possession of a knife, aggravated assault and various other offenses. He regularly threatened people with violence, including assaulting a bus driver who asked him to produce a transfer ticket and a worker in a mobile phone store who refused him a refund. In another case, he stabbed a bus driver 13 times.

His lawyers and supporters did not deny this, but said his behavior had been the result of his mental health problems. Numerous psychiatric reports presented to the court attested to this, although some said that when he took psychotropic drugs he was fairly lucid.

The ruling, and the apparent decision by the Canadian government not to give Mr. Yang asylum, come as the government faces general elections amid claims by the opposition that it is soft on violent migrants. It also faces a tricky legal situation with an executive of the Chinese tech giant Huawei whom the United States wants extradited.

Mr. Yang’s status as a dissident is hardly in doubt. A native of the southwestern province of Sichuan, he served three years in a labor camp for putting up posters in support of the 1989 Tiananmen democracy protests. He later helped found the Sichuan branch of the China Democracy Party, which was crushed shortly after it was formed in 1998.

Mr. Yang evaded arrest by using a fake identity card to join a package tour from China to Thailand, where he defected. He lived in Thailand for a few years, and the office of the United Nations High Commissioner for Refugees then resettled him in Canada, where he obtained residency.

His improbable escape was recounted by the exiled author Liao Yiwu in a recent book, “Bullets and Opium.” Mr. Liao recently posted an essay on Facebook opposing Mr. Yang’s deportation, saying Canada would be “aiding and abetting the trampling of human rights.”

Mr. Yang’s human rights track record was vouched for by Charles Burton, an associate professor of political studies at Brock University in Toronto who, while working as a diplomat, had firsthand knowledge of Mr. Yang’s activities. Based on his experience as a political officer, Professor Burton wrote that Mr. Yang faced a certain return to prison, “brutality and solitary confinement.”

Sharon Hom, executive director of the group Human Rights in China, said that Canada was obliged under the international principle of non-refoulement not to send refugees back to a place where they were likely to face persecution or abuse.

“I have serious concerns that the Canadian government considered non-refoulement,” she said in a telephone interview. “Otherwise how could they do this?”

The Canadian government case did, in fact, consider these issues but dismissed them as insignificant. It rejected Professor Burton’s opinion as “the opinion of an academic” and said Mr. Yang probably could get good psychiatric care.

In any case, the government argued that any concerns were outweighed by Mr. Yang’s lengthy record of legal trouble.

Mr. Wawrzkiewicz, the lawyer, noted that there had been a deportation order for his client since 2014.

“This case has been very trying. It strikes me as a human tragedy,” he said, adding that Mr. Yang suffered from mental problems and needed hospitalization.

Scott Bardsley, a spokesman for Canada’s minister of public safety, said the ministry was unable to comment on specific “removals” out of concern for privacy.

He said that Canada had a robust assessment process to ensure that no one was removed at risk of persecution. Once a removal order was issued, he added, protected refugees could only be removed if they had been deemed dangerous to the public and raised security concerns. Concerns about their risk of being persecuted were weighed against security concerns such as whether they had engaged in espionage or terrorism, committed human rights violations, or had been convicted of serious criminal offenses.

Hurting Mr. Yang’s case is that he told the court in 2008 that the Chinese government would not care if he were sent back to China.

A friend, the Toronto-based writer Sheng Xue, said she visited Mr. Yang last week and asked him why he had said that. She said he told her he planned to flee to Thailand again, even though the Chinese border is no longer so permeable and Chinese identity cards are now far harder to forge.

“I was shocked at his answer,” Ms. Sheng said by telephone. “He has no idea what he’s saying; he needs psychiatric help.”

Adding to her concern, Ms. Sheng said, is that the court recently applied for Mr. Yang to obtain a travel permit. In her experience, she said, the Chinese Consulate in Toronto rarely issues travel documents to dissidents, but Mr. Yang got one immediately.

“They know that with a travel document he can be sent home,” she said. “They’ll be waiting for him.”