Hong Kong activists, Joshua Wong and Agnes Chow spoke to the news media after being arrested by the police and released on bail. Credit: Lam Yik Fei for The New York Times

HONG KONG — The police in Hong Kong on Friday arrested prominent activists and blocked plans for a march on Saturday, a sensitive political anniversary, as the authorities intensified their crackdown on an opposition movement that has shaken the semiautonomous Chinese city for months.

Joshua Wong and Agnes Chow, student leaders of the pro-democracy demonstrations in Hong Kong five years ago that presaged the current protests, were arrested on Friday morning, their political organization said. They were later released on bail. Andy Chan, who led the now-banned Hong Kong National Party, was taken into custody Thursday night at the Hong Kong airport, he said on Facebook.

The arrests were the latest in a dramatic week of events in Hong Kong, where tensions were running high after three months of protests touched off by widespread anger over legislation, since suspended, that would have allowed criminal suspects to be extradited to mainland China for trial.

[City on edge: Here are photos from Hong Kong’s summer of protest]

In addition to the arrests, Hong Kong’s chief executive, Carrie Lam, said the government was considering whether there were other measures the city could take to establish order; China sent in fresh troops to the territory; and the authorities denied permission for what was widely expected to be a well-attended demonstration.

The march on Saturday was scheduled to coincide with the fifth anniversary of a decision by the Chinese legislature to impose strict limits on elections in Hong Kong, a move that touched off what came to be known as the Umbrella Movement.

More than 900 arrests have been carried out since early June, but the detentions on Thursday and Friday stood out. The arrest of prominent activists during sensitive periods is a common tactic by the authorities in mainland China, but such an approach is highly unusual in Hong Kong, which has its own legal system and far greater protections for civil rights.

“This past week, we have seen scare tactics straight out of Beijing’s playbook: pro-democracy protest organizers attacked by thugs, prominent activists arrested after being snatched from their homes and streets, and a major rally planned for Saturday banned,” Man-kei Tam, director of Amnesty International Hong Kong, said in a written statement.

Rick Hui, a district councilor, was also arrested Friday on suspicion of interference with police duties during a July 14 protest. Althea Suen, a former head of the University of Hong Kong student union, planned to go to police headquarters after officers went to detain her for damaging property and illegally entering the legislature, but did not find her at home, a message on her Facebook accountsaid Friday.

The police denied the series of arrests was planned to coincide with a major protest. “As soon as we have enough evidence, we would make arrests,” said John Tse, chief superintendent of the Police Public Relations Branch. “There is no relationship between the timing of our arrests and public activities.”

The marches have been arguably the most effective way for residents of Hong Kong to draw attention to their anger — one rally reportedly attracted nearly two million people, about a quarter of the population. But plans to hold a large rally on Saturday were blocked by the authorities.

The authorities rejected an appeal on Friday to hold the rally, after the police initially turned down an application for protesters to march to the Chinese government’s representative office in Hong Kong to mark the anniversary of the decision on election limits.

The Civil Human Rights Front, which has organized several large, peaceful marches attended by hundreds of thousands of people, expressed dismay at the ruling but said it would abandon the march.

Bonnie Leung, a prominent member of the group, called the ban “a total violation of the basic human rights of Hong Kong people.”

The movement will not be die down because of the decision of the appeal board,” she said. “We will carry on. We will continue to apply for marches and Hong Kong people, I’m sure, will keep coming out to the streets.”

On Friday, people said they were still planning to demonstrate Saturday, regardless of the police ruling. The authorities also warned people not to attend any unauthorized demonstrations, even under the guise of other activities. 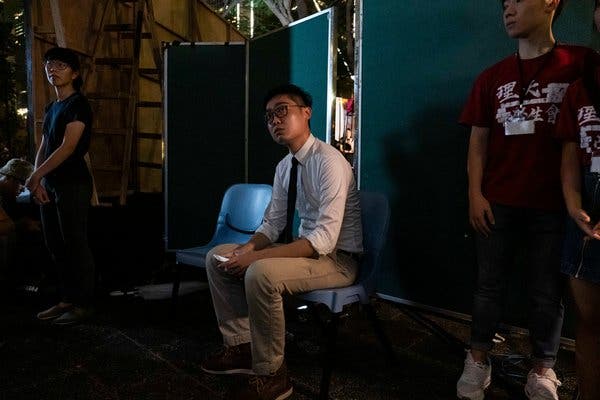 “We should not tolerate excuses to break the law, so law enforcement will take action,” said Patrick Kwok, assistant commissioner of the police.

Jimmy Sham, another Civil Human Rights Front official, and Max Chung, who had applied for another protest in July, were attacked in separate episodes on Thursday. Mr. Sham was uninjured, but a friend who protected him was hit on his arms by a person with a bat. Mr. Chung was hit on his arms, back and neck by men wielding pipes and umbrellas.

Mr. Wong, 22, was arrested at about 7:30 a.m. on the street near a subway station on the south side of Hong Kong Island, his political organization, Demosisto, said on Twitter. Ms. Chow was also arrested, and like Mr. Wong sent to police headquarters in Wan Chai, the group said.

The police said that Mr. Wong and Ms. Chow were arrested on unauthorized assembly charges related to a June 21 protest, when thousands of people surrounded the police headquarters. They were both granted bail Friday afternoon.

Ms. Chow said she believed the arrests were timed to discourage turnout on Saturday. “Beijing is demonstrating a very tough stance on this issue and they are trying to deter more people from coming out,” she said.

Mr. Wong became a widely recognized face of the 2014 Umbrella Movement. As a skinny, bespectacled teenager, he could often be seen on the streets, exhorting huge crowds through a megaphone.

He has been sentenced twice to short prison terms for convictions related to the 2014 protests, and he most recently served two months this year after being convicted on charges related to the clearance of a protest site in Mong Kok. He was released in June, just as the protests over the extradition legislation began.

Mr. Wong remains a prominent figure in Hong Kong politics, but his profile and influence in the current protest movement are much lower than it was in 2014.

Ms. Chow was a spokeswoman for Scholarism, a prominent student activist group, for part of the 2014 protests.

Mr. Chan led a small, pro-independence political party that became a focus of attention last year when the Hong Kong government banned it under a colonial-era public security ordinance. The rare move raised concerns that it would threaten free expression and association in Hong Kong.

He was arrested on suspicion of rioting and assaulting a police officer during a July 13 demonstration.

Unlike the Umbrella Movement, the current protest effort has embraced no identifiable leaders, in part because many high-profile figures, like Mr. Wong, ended up in prison.

The arrests came after other developments that reflected frustration from China and the local government in Hong Kong with the enduring protest movement.

Mrs. Lam, the chief executive, said Tuesday that the government was looking into “all laws in Hong Kong — if they can provide a legal means to stop violence and chaos,” when asked whether she was considering use of the sweeping Emergency Regulations Ordinance.

Beijing described the move as a regular rotation of its forces, but in light of warnings from mainland officials that the military could be used to quell unrest in Hong Kong, it raised questions about whether China was positioning its troops for a crackdown.

A picture caption with an earlier version of this article referred incorrectly to a protest attended by Joshua Wong. It took place in June, not July.