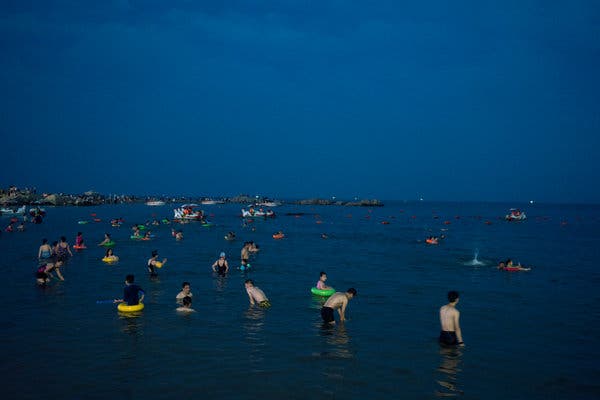 Enjoying the waters at the beach in Beidaihe, China, in August. Credit: Giulia Marchi for The New York Times

BEIDAIHE, China — Most summers, the founder of Communist China, Mao Zedong, made big and fateful decisions at a funky stretch of beach a few hundred miles east of the nation’s sweltering capital. He swam in weather fair or foul. He sat cross-legged in the sand, dressed only in black trunks, his portly belly exposed for all to see.

His successors have not been such fearless swimmers, nor such show-offs.

But they still like to come each August to Beidaihe, a mix of shabby coastal resort with high-end villas behind tall fences.

In keeping with the hierarchical character of Chinese socialism, the top officials never rub shoulders with the public. Three distinct categories of visitors exist side by side, separated by earpiece-wearing security forces — and walls.

At the top of the tier are President Xi Jinping and his colleagues, hidden in compounds in a spot where the seawater is said to be cleaner than the muddy colored ripples at the public beach.

In the next level come party cadres who are assigned government villas, sanitariums and fenced-off patches of beach. They can be seen in the evening strolling in small groups on the fir-lined promenade along the shore in look-alike short haircuts, and pressed pants.

On the lowest rung come members of the public, who stay at inexpensive hotels and guesthouses, and during the weekends have barely an inch to move on the sand heaving with families. 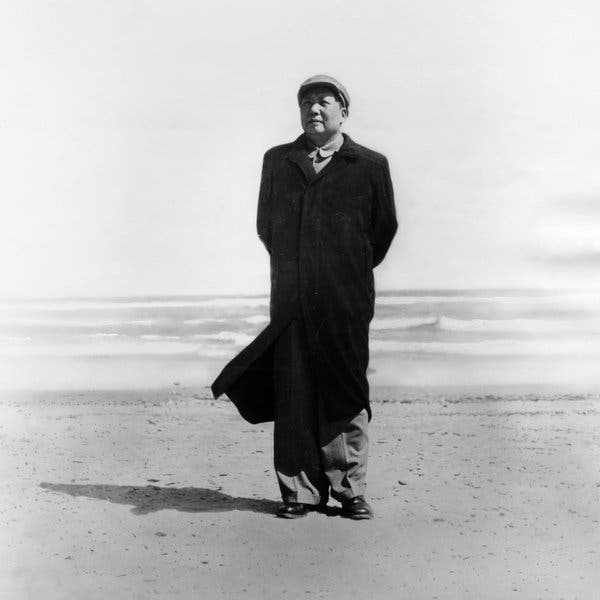 Mao Zedong in Beidaihe in 1954. The weather that day was not amenable to swimming trunks. Credit: Universal Images Group, via Getty Images

When bodyguards and black limousines are spotted, it means the leadership has arrived in town, and this month, there have been plenty of sightings of both. At any moment, the main street can be suddenly closed to traffic, with uniformed police officers in white gloves standing every few meters as cars with darkened windows whiz by.

“The big guy and his wife have been here for three days,” a veteran lifeguard, Liu Wenshan, 65, confided earlier this month, referring to Mr. Xi.

Ankle-deep in water, he was relaying information that was supposed to be top secret; whether he really knew wasn’t clear. 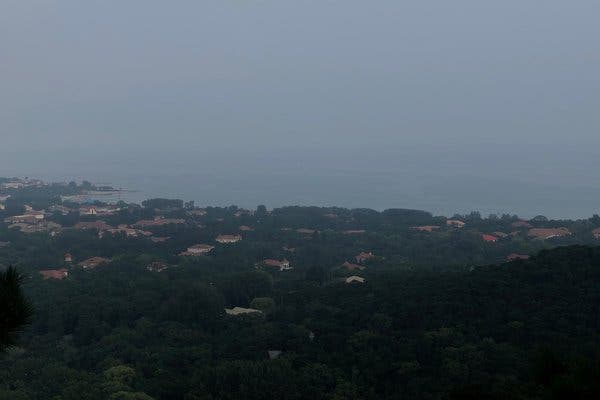 The hierarchical character of Chinese socialism is easy to see at the beach. Party cadres are assigned government villas, seen here, while the general public stays in inexpensive hotels. Credit: Giulia Marchi for The New York Times

The reputed presence of Mr. Xi, who this holiday season may face some tough decisions on the future of Hong Kong, was immaterial to the crowds, who would never catch a glimpse of him anyway.

At the main beach, the crowd is not quite the most fashionable set. Chinese millennials spurn the place as fusty, and less than pristine. They prefer the Maldives or Thailand or even, in some cases, the Hamptons.

“How can one put this with finesse?” said Geremie Barmé, who writes about Chinese culture and who often visited Beidaihe in the post-Mao era. “The Chinese communists don’t really do ‘beach culture.’ They model their habits on the Soviet leaders, and the Black Sea resorts and sanitariums of the Soviet heyday. The result is rather perfunctory, dismal and, in particular, in the age of post-poverty socialism, incredibly kitschy.” 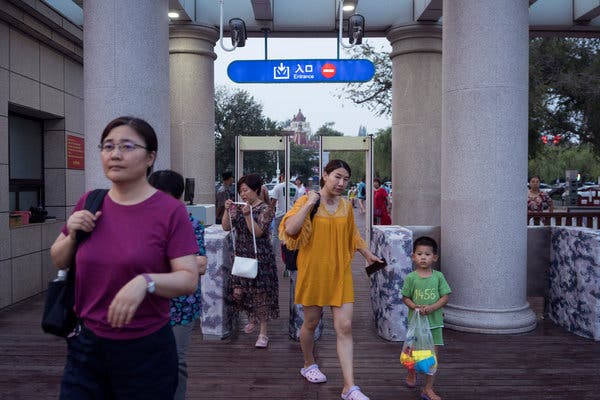 Passing through metal detectors to get access to the public beaches in Beidaihe. Credit: Giulia Marchi for The New York Times

There’s something to what Mr. Barmé says about the kitsch in Beidaihe. A mélange of architecture — Tudor gables, Hapsburg-style domes, a mini-Arc de Triomphe — line the main streets, the result of a makeover by town leaders about a decade ago intended to appeal to foreign visitors, mostly Russians.

Now the pastel paints on the buildings are peeling. The main tenants are Pizza Hut, McDonald’s and cavernous family-style restaurants selling live fish squirming in water tanks, waiting to be cooked.

On the sand, the beach culture could not be more different from, say, the French Riviera, or Italy’s Portofino, not to mention Australia’s surfing beaches where the more sun blazing on your skin, the better. 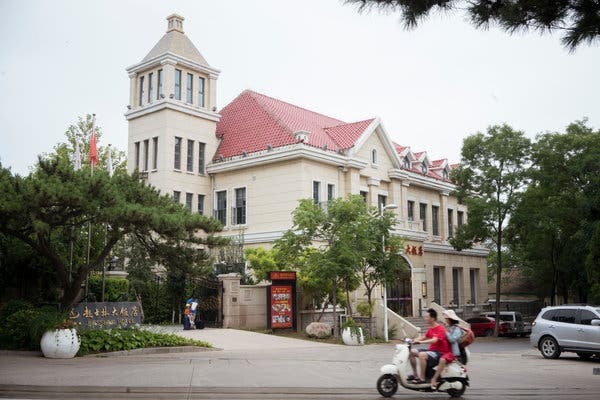 The Kiessling Hotel and Restaurant in Beidaihe, whose cityscape is a mélange of architectural styles. Credit: Giulia Marchi for The New York Times

Here, the sun is the enemy. Body armor is requisite for many.

Perched on a steel-framed watch tower dug into the sand, a lifeguard peered at the holiday makers bobbing around in the water, a walkie-talkie and megaphone at hand.

She wore a mauve face mask that covered her from chin to hairline, ear to ear. Her eyes hid behind reflective sunglasses. Her arms were swathed in elasticized gloves from wrist to shoulder. She resembled a bank robber out for a day on the sand.

In the West, it was noted, many women sunbathe so they look bronzed. 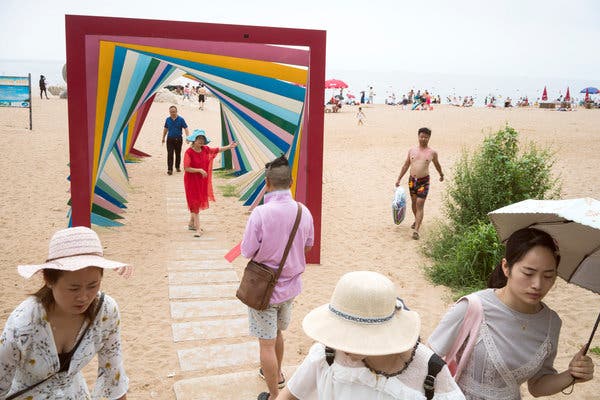 The beach in August. Credit: Giulia Marchi for The New York Times

“We don’t like that,” she responded. Having her feet and hands exposed to the sun was bad enough, she said.

Swimming is not popular in China. Too many of the 1.4 billion people live inland to make ocean swimming a natural pastime. The number of swimming pools outside the major coastal cities remains low, the National Sports Bureau says.

Brightly colored inflatable rubber rings that rent for $5 a day serve as an insurance against drowning. 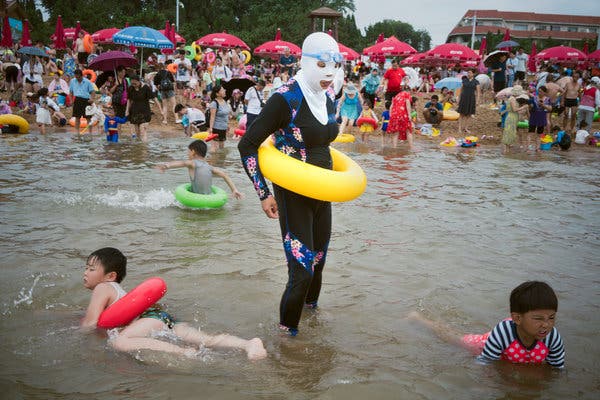 One beachgoer protecting herself from the sun. On the weekends, there is barely an inch to move on the sand. Credit: Giulia Marchi for The New York Times

Then there is the question of the water quality in the Bohai Sea, a large basin that swirls into Beidaihe.

“The water quality is bad,” said Prof. Wang Yamin, of Shandong University Marine College. Runoffs from chemical fertilizer plants have spoiled the sea in the last 30 or so years as China’s economy grew, he said.

For those who came from the hinterland, though, the water seemed not so terrible.

After a five-hour high-speed train ride, Wang Hong, 40, arrived from Shanxi in central China, inspired by nostalgic memories of a visit 20 years ago. 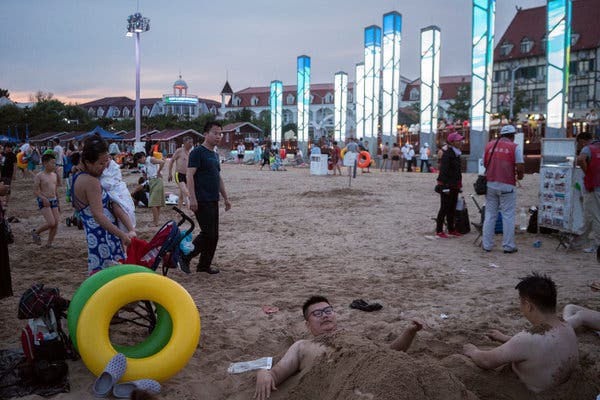 On a Saturday, enjoying the seaside at dusk. Credit: Giulia Marchi for The New York Times

His son, Wang Rui, 4, had never seen the ocean. Rui paddled in the shallows, and built sand castles. He meticulously packed handfuls of sand into a blue plastic bucket, tipping out the contents into perfect shapes, smiling all the while.

While Mr. Wang’s memories are from two decades ago, momentous events from even further back in China’s postwar history played out here at the beach.

In the late 1950s at Beidaihe, Mao dictated the plan for the Great Leap Forward that was meant to industrialize China overnight but ruined the country’s economy and led to widespread famine.

In 1971, Lin Biao, Mao’s top general, fled from a house above the beach — now surrounded by a high wall — and boarded a plane at the local airport to flee the country. Under circumstances never fully resolved, the plane crashed in the Gobi Desert in Mongolia, killing him and everyone onboard.

On the eve of his trip to the United States in 2000, China’s then-leader, Jiang Zemin, welcomed Mike Wallace, the CBS “60 Minutes” correspondent, to his compound at Beidaihe. Each dressed in a suit and tie, they sparred about American politics, spies and human rights. It was a candid conversation, unlikely to be repeated with any Western journalist under the current leadership — even at the beach.