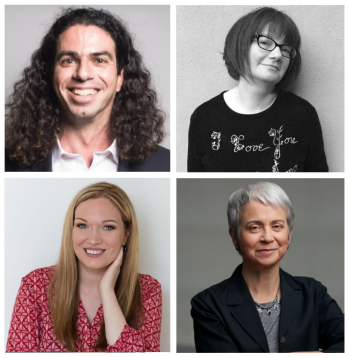 The four 2020 mentorships are offered by ALTA in partnership with AmazonCrossing, the Hong Kong Poetry Festival Foundation, the Institut Ramon Llull, and The Russian Federation Institute for Literary Translation.

Kareem James Abu-Zeid is a translator of poets and novelists from across the Arab world. His work has earned him a National Endowment for the Arts grant (2018), PEN Center USA’s Translation Prize (2017), Poetry Magazine’s translation prize (2014), the Northern California Book Award in Poetry (2015), and residencies from the Banff Centre and the Lannan Foundation, among other honors. He has a PhD in Comparative Literature from UC Berkeley, and has been a Fulbright Research Fellow in Germany, and a CASA Fellow in Egypt. The online hub for his work is www.kareemjamesabuzeid.com.

Mara Faye Lethem has translated novels from the Catalan by Marta Orriols, Jaume Cabré, Albert Sánchez Piñol, Marc Pastor, Toni Sala, Eduard Márquez, and Alicia Kopf, among others. Her work has appeared in Granta, The Paris Review and McSweeney’s, and been recognized with two English PEN Awards and two International IMPAC Dublin Literary Award nominations. She writes the New Catalan Fiction catalogue each year for the Institut Ramon Llull, and wrote the application that earned Barcelona designation as a UNESCO City of Literature. She lives between Brooklyn and Barcelona, and is currently working on a novel by Max Besora.

Jennifer Feeley is the translator of Not Written Words: Selected Poetry of Xi Xi (Zephyr Press and MCCM Creations, 2016), for which she won the 2017 Lucien Stryk Asian Translation Prize and which received a 2017 Hong Kong Publishing Biennial Award in Literature and Fiction. She is the translator of the first two books in the White Fox series by Chen Jiatong (Chicken House Books), and her translation of the selected works of Shi Tiesheng is forthcoming from Polymorph Editions. She was awarded a 2019 National Endowment for the Arts Literature Translation Fellowship to translate Xi Xi’s novel Mourning a Breast.

Marian Schwartz is a prize-winning translator from Russian whose most recent publications are Leonid Yuzefovich’s Horsemen of the Sands (Archipelago) and Olga Slavnikova’s The Man Who Couldn’t Die: The Tale of an Authentic Human Being (Columbia University Press).  She is currently translating the four volumes of Aleksandr Solzhenitsyn’s March 1917: The Red Wheel, Node III (University of Notre Dame Press), the second volume of which will be published in November 2019. In 2014 she received the Read Russia Prize for Contemporary Russian Literature and in 2018 the Linda Gaboriau Award for Translation from the Banff Centre for Arts and Creativity.

For more information, please see our website for details, as well as introductions to former mentees and their accomplishments.