Source: NYT (8/9/19)
Hong Kong Protesters Descend on Airport, With Plans to Stay for Days
By Katherine Li and Mike Ives 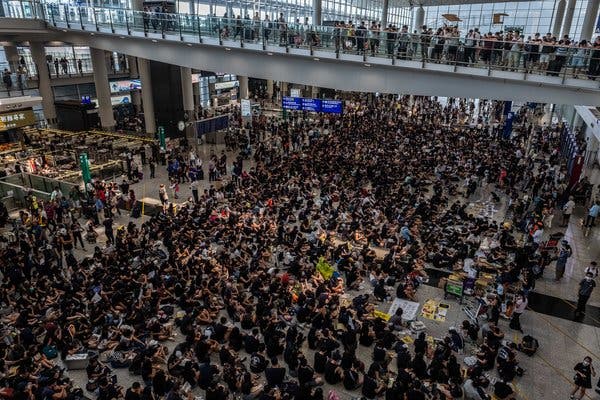 HONG KONG — Thousands of black-clad antigovernment protesters demonstrated at Hong Kong’s international airport on Friday, taking aim at both a global transit hub and the city’s closely guarded reputation for order and efficiency.

The protest in the airport’s arrivals hall, which is planned to last through Sunday, comes as Hong Kong reels from its worst political crisis since Britain handed the former colony back to China in 1997, and less than a week after protests and a general strike caused chaos in the city and led to 148 arrests.

In recent days, mainland Chinese officials have issued stern warnings to protesters about the risks of continuing their broad campaign for political reforms. The movement began in opposition to a bill that would have allowed extraditions to the mainland — where the courts are controlled by the ruling Communist Party — but has since expanded to include a number of other demands for greater democracy.

[What’s going on in Hong Kong? Here’s how the protests have evolved.]

The protest Friday began in the early afternoon, as demonstrators in black T-shirts and face masks nearly filled the airport’s cavernous arrivals hall, carrying pamphlets about their demands and chanting “Hong Kongers, keep going,” a rallying cry for the two-month-old protest movement.

The protesters also chanted “Revive Hong Kong; revolution of our times,” a slogan that the central Chinese government has said it views as a challenge to its sovereignty.

Protesters were careful to leave a path clear for travelers, some of whom recorded the demonstration on their phones or helped themselves to pamphlets. 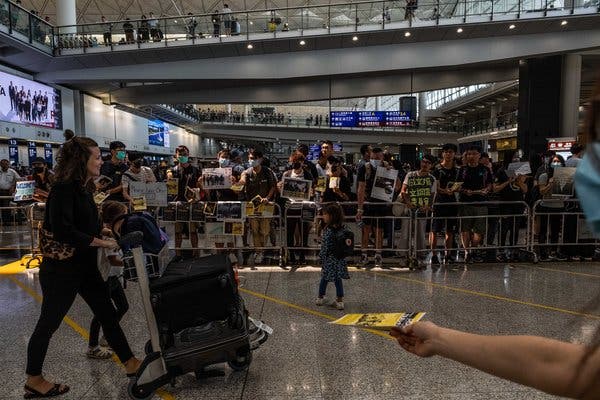 Demonstrators handed out pamphlets about the protests. One arriving traveler said his first order of business would be to change out of the black T-shirt he happened to be wearing. Credit: Lam Yik Fei for The New York Times

“You’ve arrived in a broken, torn-apart city, not the one you have once pictured,” one of the pamphlets read. “Yet for this Hong Kong, we fight. We shall never surrender.”

Sam Yang, 45, a Taiwanese businessman, waded through the crowd after arriving on a flight from the mainland Chinese city of Chengdu. He said that his first order of business would be changing out of the black T-shirt that he happened to be wearing.

“Obviously I’ve never run into any protests here before,” Mr. Yang said. “I don’t know how this conflict will end, either. Good luck to Hong Kong.”

Many of the street protests in recent weeks have ended with the Hong Kong police firing tear gas and rubber bullets in clashes with demonstrators. A hard-core contingent of young protesters has increasingly embraced violent tactics, arguing that the government has ignored more peaceful displays.

Protesters said they did not expect the police to use tear gas against them at the airport. Before the demonstration, several protesters, including employees of Hong Kong’s flagship carrier, Cathay Pacific Airways, stressed that it was meant to be an entirely nonviolent way of maintaining the movement’s momentum.

Miki Ip, a real-estate agent who attended the demonstration, said she came partly to refute unproven claims by the Chinese government that the recent civil disobedience has been led by foreign forces who wanted to undermine Beijing’s authority.

“China has told us so many lies, and we lack a government that really works in our interests,” Ms. Ip, 38, said in the arrivals hall. “The living conditions facing youngsters nowadays are harsh, and they feel a lack of ownership over their hometown, both economically and politically.” 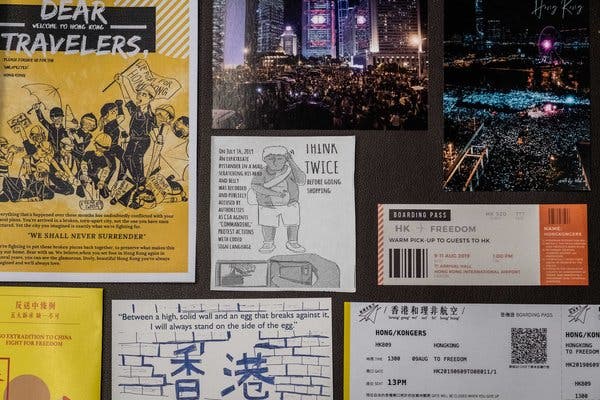 Protesters at the airport handed out leaflets promoting their causes. Credit: Lam Yik Fei for The New York Times

As of early evening, the police presence in the hall was light, and it was unclear how many of the protesters planned to spend the night.

The airport handled nearly 75 million passengers last year, making it the world’s eighth busiest for passengers, according to Airports Council International. It was also the world’s busiest aviation terminal for cargo.

The government has already suspended the contentious extradition bill that set off the unrest in early June, but protesters are demanding a complete withdrawal of it, along with an independent inquiry into what they call police misconduct and the resignation of the territory’s deeply unpopular chief executive, Carrie Lam.

The stakes are high this weekend partly because the protesters have not applied for permission to hold the airport demonstration, as they have for other protests in recent weeks. That technically makes it an illegal assembly.

Hong Kong’s Airport Authority said on Thursday that it was aware of plans for a “public assembly” the next day. It also said, without elaborating, that it “understands that there is no application so far for these activities” and “has contingency measures to ensure smooth airport operations.”

Later on Thursday, the authority posted a notice on its website saying that the airport would operate normally on Friday, although it advised passengers to check their flight status before traveling there and to allow “sufficient time” for the journey.

The Hong Kong police said in a separate statement that while they could not comment on operational details in handling the protests, they planned to “monitor the latest developments, then make appropriate arrangement and deployment plans.” 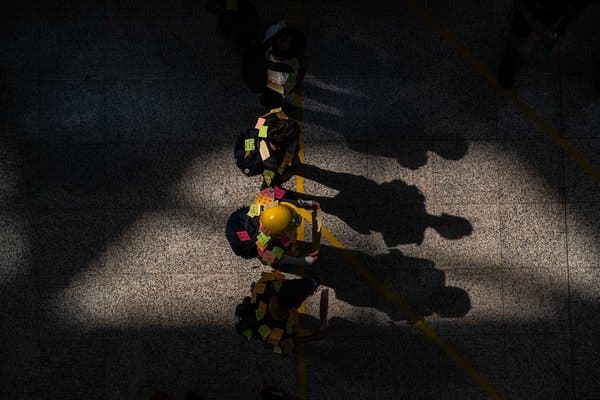 Unlike many of the recent protests, the one at the airport has not been authorized by the authorities. Credit: Lam Yik Fei for The New York Times

Several other antigovernment demonstrations are planned for this weekend around Hong Kong. They include a family-friendly rally in the central business district that the police approved in advance, and three planned marches elsewhere for which permit applications were rejected.

On Wednesday, the United States joined several other countries — including Australia, Britain, Ireland, Japan and Singapore — in issuing a warning to its citizens about traveling to Hong Kong. It advised them to “exercise increased caution” because of recent “confrontational” protests.

The local government scrambled on Thursday to reassure visitors that Hong Kong was still safe, saying in a statement that while some may have been inconvenienced by the recent protests, the city remained “a welcoming city for tourists and travelers from around the world.”

The Hong Kong police have in recent weeks dispersed protesters by spraying tear gas in numerous parts of the city, including residential areas and two major shopping districts. But the government’s statement said that “illegal confrontations” had not been widespread and had been “confined to a limited area near the procession routes,” though it acknowledged that some visitors may have been inconvenienced.

Mrs. Lam appeared at a news briefing on Friday evening, flanked by her finance secretary and leaders of the local business community. They appeared to be responding to an earlier call from the Chinese government to stand behind her and oppose violence in the semiautonomous territory.

In her remarks, Mrs. Lam called for all sectors of Hong Kong society to overcome their differences, emphasizing the economic harm she said the protests had inflicted on the economy. But she declined to offer new concessions to the protest movement.

“I don’t think we should just make concessions in order to silence the violent protesters,” she said.

Alison Lee, 29, one of the protesters at the airport, said Mrs. Lam’s remarks had left her cold.

“I think that Carrie Lam is just repeating what she said before,” Ms. Lee said. “She has provided no solutions and no plans to solve the current problems. This is not going to just go away because she wants it to.”