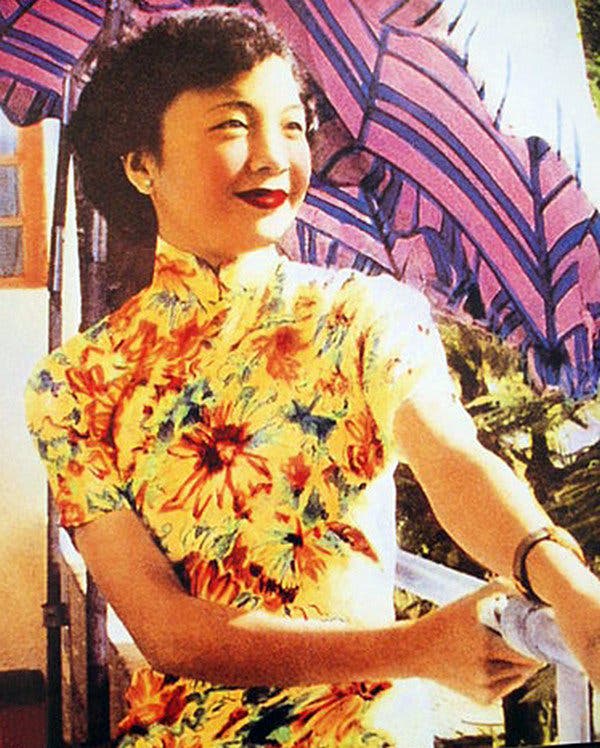 Yao Li in an undated photo. She began singing in the 1930s and became one of the “seven great singing stars of Shanghai,” performing and recording in wartime. Credit: Pictures from History and Granger, New York

Yao Li, a celebrated singer in Shanghai in the midst of war in the 1930s and ’40s, whose music remained popular after she moved to Hong Kong when China turned communist, died on July 19. She was 96.

The death was reported by the newspapers Ming Pao in Hong Kong and The Malay Mail in Kuala Lumpur. No other details were given.

Ms. Yao was called “the silver voice” in Shanghai, her music influenced by jazz and Chinese folk. She was not famous well beyond Asia, but at least two of her songs made an impact in the United States. An English-language version of one of her hits, “Rose, Rose, I Love You” (1940), was recorded by the American singer Frankie Laine in 1951 and rose to No. 3 on the Billboard Hot 100 chart.

And last year, “Ren Sheng Jiu Shi Xi” (or “Life Is Just a Play”), which she released in Hong Kong in 1959, was used on the soundtrack of Jon M. Chu’s romantic comedy “Crazy Rich Asians” (2018), a movie about a New Yorker who travels to Singapore to meet her boyfriend’s wealthy family.

With her soft, high voice, Ms. Yao was long referred to as one of the seven great singing stars of Shanghai, along with her idol, Zhou Xuan, who was known as “the golden voice.” The music of Shanghai bore not only the rhythms of jazz, but also global sounds like Cuban rumba and the Hawaiian steel guitar.

Ms. Yao thrived in that milieu, working at times with her brother, Yao Min, a leading songwriter with whom she also sang duets.

They created a modern Chinese popular music that moved elegantly between swing, the blues, Hollywood standards and Chinese folk,” Andrew F. Jones, who teaches modern Chinese literature and media culture at the University of California, Berkeley, wrote in an email, “while incorporating traces of many other styles and sounds from the multinational soundscape of colonial-era Shanghai.”

She continued to record after the outbreak of the Second Sino-Japanese War in 1937 and during Japan’s occupation of Chinese cities through 1945. One number, “Congratulations” (1946), sung by Ms. Yao and her brother, became a familiar song to celebrate the Chinese New Year. But it was also a commentary on the defeat of Japan in World War II, Professor Jones said.

The song’s rather melancholy tone,” he wrote, “reflects both the exhaustion and misery wrought by eight years of Japanese occupation” and the distress that ensued over the social unrest and civil war that engulfed China in the wake of the Allied victory.

Ms. Yao (whose name was sometimes spelled Yao Lee) was born on Sept. 3, 1922, and raised in Shanghai. As a girl in the early 1930s she listened to Zhou on the radio but was too poor to buy her records. Ms. Yao herself began singing on the radio at 13 — at least once on a program with Zhou — and signed her first contract, with Pathé Records, a part of EMI, three years later. She became a popular nightclub attraction.

“Big movie stars like Li Lihua would come every Sunday to watch me perform and request specific songs,” she recalled in an interview in 2013 with The Glass, a cultural magazine.

She married Huang Baoluo in the late 1940s but did not stay in Shanghai much longer. The Communist Party took power in 1949 and, fearing that she might have to endure re-education by the new regime, she fled to Hong Kong with her husband the next year.

“I was so scared and very sad,” she told The Glass. “I thought my life, and career, were finished.”

They were not. The musical world of Shanghai was largely recreated in Hong Kong, which was then a British colony. EMI opened offices there and invited her and other Pathé artists to record. She also started working in the film industry, providing vocals that were lip-synced by the actress Chung Ching in a series of pictures, including “Songs of the Peach Blossom River” (1956).

By then Ms. Yao had begun to emulate the pop and country singer Patti Page by deepening her voice. She continued to sing into the mid-1960s. After her brother’s death, in 1967, she took an executive job at EMI.

Information about her survivors was not available.

Ms. Yao stopped making records, she said, because of the encroachment of modern studio technology.

Today, she said, “the singer needs only to sing to prerecorded music, and she can do as many takes as she wishes,” she lamented in an interview with the newspaper The Straits Times in Singapore in 1992.

“For me,” she added, “I could never do without a live band. Pretaped music kills all the spontaneity and feelings in me.”