Source: NYT (7/25/19)
What Is the Chinese Military Doing in Hong Kong?
By Austin Ramzy 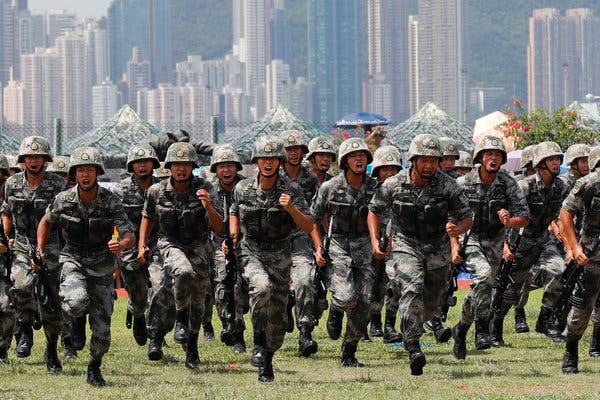 HONG KONG — When Hong Kong, a former British colony, returned to Chinese control in 1997, one of the biggest worries was how the Chinese military would behave.

Images of the People’s Liberation Army killing civilians on the streets of Beijing eight years earlier were still fresh in the minds of Hong Kong residents, who had marched in huge numbers to support the pro-democracy Tiananmen protests, and who had begun marking the anniversary of the 1989 crackdown with a yearly vigil.

As troop trucks and armored personnel carriers rolled into Hong Kong after its handover from Britain, residents wondered what the soldiers would do next. But in the 22 years since then, the People’s Liberation Army has had a very limited role in the city.

This summer, however, after weeks of antigovernment demonstrations and some incidents of violence, questions about the military have been revived. Chinese officials and state media have reacted with increasing vitriol to the protesters, particularly after some painted slogans on the central government’s liaison office in Hong Kong on Sunday night and splashed ink on the national crest.

On Wednesday, a spokesman for China’s Ministry of National Defense warned that the “behavior of some radical protesters challenges the central government’s authority,” something that “absolutely cannot be tolerated,” hinting that China was prepared to use military force if necessary. 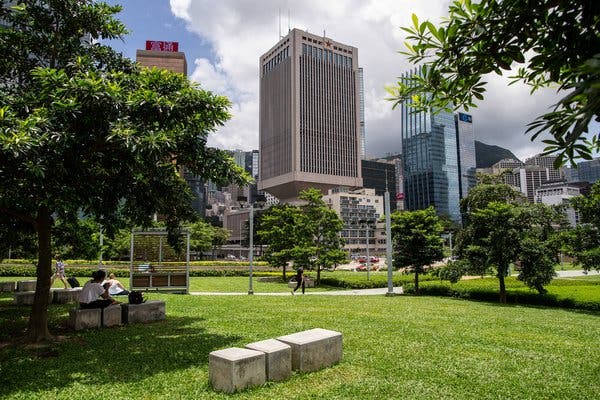 The headquarters of the army’s Hong Kong garrison, near the main offices of the local government, has loomed over many of the recent protests. Credit: Chan Long Hei/EPA, via Shutterstock

Here is a look at the People’s Liberation Army garrison in Hong Kong, what it does and whether it might be called to the streets:

How many Chinese soldiers are in Hong Kong?

The exact number of troops stationed in the territory is not formally announced, but estimates range between 6,000 and 10,000. Many soldiers spend time in Shenzhen, the mainland Chinese city across the border, where it is cheaper to house them and easier to carry out exercises. So only part of the garrison is in Hong Kong at any given time.

The People’s Liberation Army manages 19 sites in Hong Kong, including 12 barracks. The most prominent sites are a helicopter regiment at Shek Kong Air Base, a naval base with a handful of smaller warships at Stonecutters Island and the headquarters of the Hong Kong garrison along Victoria Harbor on Hong Kong Island.

The headquarters, in a building that was once the British military command center, is across a street from the Hong Kong legislature and the main local government offices. So the protests that have roiled the city for weeks often take place a short distance from army headquarters.

The protesters generally ignore it, and the soldiers appear to ignore the protesters. But during mass pro-democracy protests in Hong Kong five years ago, people on higher floors of the building could sometimes be seen monitoring protesters on the streets below.

What is the garrison’s role?

The “one country, two systems” model, under which Hong Kong exists as a semiautonomous part of China, lets the city operate its own local institutions. But foreign relations and national defense fall under the responsibility of the central government in Beijing.

So the Hong Kong police and courts are responsible for law and order, while soldiers stationed in the city “shall not interfere in local affairs,” according to the garrison law for Hong Kong and the Basic Law, the local constitution. But the local government may ask Beijing for assistance from the garrison “in the maintenance of public order and in disaster relief.”

The military has never been called in to help with public order, but last year, hundreds of soldiers did help clear trees after a typhoon hit the city. The garrison often has days when it invites the public to see weaponry and watch drills, but it is rare to see a soldier in Hong Kong outside the military facilities.

Still, the military did publicize soldiers’ participation in drills in Hong Kong last month, as the protest movement was growing. Photos carried by the official military newspaper showed soldiers on board a navy vessel backed by the Hong Kong skyline.

What are the chances that the military will step in?

When Senior Col. Wu Qian, the Chinese Ministry of Defense spokesman, warned Wednesday about the possibility of military involvement, he pointed out that the law would permit such action. But thus far, there is no indication that the Hong Kong government wants troops to step in. Twice in the last month, the local authorities have denied reports of plans to use the Chinese military for security purposes in Hong Kong.

The law states that any such action must be initiated by the Hong Kong government, although another provision of the Basic Law allows the standing committee of the National People’s Congress to declare a state of emergency in Hong Kong if turmoil “endangers national unity or security.”

In practice, any such decision would be made by China’s leader, Xi Jinping, with the likely involvement of the Politburo Standing Committee, the highest level of political power in China, said Willy Lam, adjunct professor at the Center for China Studies at the Chinese University of Hong Kong.

Such a decision does not appear to be imminent, and at this point, the discussion of military force is probably a tactic to put pressure on the protesters to back down, Mr. Lam said. One key obstacle to using soldiers is that it would deeply stain the Chinese leadership’s reputation, he said.

China would lose a lot of face,” said Mr. Lam. “Sending in troops would mean that 22 years after the resumption of sovereignty, Beijing has dismally failed to win hearts and minds in Hong Kong and needs to rely on brute force.”