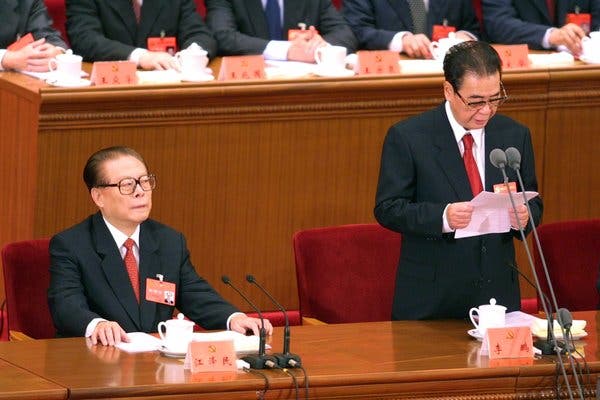 Li Peng, then chairman of the National People’s Congress, right, in 2002. At left is Jiang Zemin, then the general secretary of the Communist Party. Credit: Eugene Hoshiko/Associated Press

Li Peng, the former Chinese premier derided as the stone-faced “butcher of Beijing” for his role in the bloody crackdown on the Tiananmen Square democracy movement in 1989, died on Monday in the Chinese capital. He was 90.

Mr. Li’s death was announced on Tuesday by Xinhua, the state-run news agency. Xinhua’s report gave no specific cause of death, saying only that medical treatment had failed.

Born to Communist revolutionaries in the early years of the Chinese civil war and educated as a hydroelectric engineer in the Soviet Union, Mr. Li rose to the top ranks of the Communist Party, serving as a bridge between the old guard of revolutionaries and the more technocratic leaders who succeeded them.

He served 10 years as prime minister and then five years, until his retirement in 2003, as chief of the National People’s Congress, the country’s party-dominated, rubber-stamp Parliament.

Mr. Li was never widely loved by the Chinese public and was a wooden presence on television, but he wielded great power late in his career as a top-ranking member of the secretive Politburo Standing Committee, the country’s leading center of power. That he survived at such a rarefied level suggested that he was more politically adroit than his stodgy public image indicated.

Mr. Li is most widely remembered as the forbidding official in a Mao suit who appeared on television in May 1989 to announce the imposition of martial law in urban Beijing and to denounce leaders of the giant pro-democracy protests that had occupied Tiananmen Square in the heart of the city. They were enemies of the Communist Party, he declared, who imperiled “the fate and future of the People’s Republic of China, built by many revolutionary martyrs with their blood.”

Historians have debated how much personal responsibility Mr. Li bore for the army’s assault on students and workers beginning late on June 3, 1989, when tanks and troops with automatic rifles opened fire, killing hundreds if not more as they plowed toward Tiananmen Square. The troops took the square early on June 4.

Scholars have also debated Mr. Li’s role in the removal and permanent house arrest that spring of his more liberal rival, Zhao Ziyang, the Communist Party general secretary, who was nominally of a higher rank. Mr. Zhao had advocated negotiating with the students and opposed using the army against them. Mr. Zhao died in 2005.

Ever since 1989, critics had called for Mr. Li to face trial or a public reckoning for his role in the bloodshed. But 30 years after the Tiananmen crackdown, the Communist Party shows no sign of disavowing the decision to use armed force.

Mr. Li would later protest — accurately, in the view of most experts — that the momentous decision to send in troops in 1989 could have been made only by Deng Xiaoping, the elderly behind-the-scenes leader and military chairman who had set China on its post-Mao path of increasing economic freedom while keeping a tight grip on political power.

“True, he got the support of Deng Xiaoping for the armed suppression, but Li Peng was one of the most active of the suppressors,” said Sidney Rittenberg, who was the first American to join the Chinese Communist Party and who met Mr. Li.

Mr. Li presented his own version of events leading up the crackdown in a diarylike account that was circulated among the party’s elite and acquired by a Hong Kong publisher in 2010. In it, Mr. Li defended his conduct, describing himself as a responsible and sober-minded servant of the party and presenting Deng as the dominating force who had made a knowing decision to use armed force against the protesters.

Mr. Li recalled how he and other officials had monitored troops as they advanced toward Tiananmen Square on the night of June 3 and the early hours of June 4.

“At about half past 5 in the morning, the remaining 2,000 students and core elements behind the turmoil left through the southeast corner of the square,” he wrote. “Nobody died during the evacuation of Tiananmen Square. Thus, the cancer of the illegal occupation of Tiananmen Square was fully removed. I notified the Xinhua News Agency to report this to the country and the whole world.”

Mr. Li was known among the top leaders of the 1980s and ’90s as a conservative on economic issues, urging caution in the dismantling of state industries and the introduction of free markets.

Like many Chinese Communist leaders of his era, he revealed little of himself, usually reading from turgid official scripts in public. If there is a single colorful quotation to his name, it has not been found.

When Mr. Li was selected to a second term as prime minister in 1993, Xinhua sought to lighten his image, to wide derision. “People familiar with him say Li is kind, amiable, easy of approach and good at making friends,” the news agency reported.

His wife, Zhu Lin, was quoted as saying, “Li Peng never behaves like a domineering husband, and he always helps me do housework when he is free.” The article did not mention the luxury quarters and household servants they enjoyed in Beijing’s inner sanctum.

She and Mr. Li had two sons and a daughter. Zhu Lin became a successful businesswoman, and two of the children have run state power monopolies. Another son joined the military and later — if reports in overseas Chinese media outlets are to be believed — lived abroad.

Since Mr. Li’s retirement, members of his family, like relatives of several other elite leaders, have been dogged by accusations of corruption, described as having used their connections to amass wealth. But none have been charged with crimes.

Leftist ideology mattered less to Mr. Li than ensuring stability at almost any price and safeguarding Communist Party rule. Building his early career in the state-run power industry, he was one of the first of the so-called technocrats to rise in politics — a generation of college-educated officials, many trained in engineering, who began to take office in the 1980s and ’90s. He was known to be concerned in particular with hydroelectric power and dams.

One of Mr. Li’s signal legacies may be the Three Gorges Dam on the Yangtze River, which he promoted as premier. The project caused wide concern in China and abroad about potential environmental consequences — like earthquakes and landslides — and the human cost of relocating the more than 1.3 million people displaced by the rising waters behind the dam that inundated dozens of towns and cities.

“Without Li Peng’s advocacy, the Three Gorges Dam might never have been built,” said Li Cheng, an expert on Chinese leadership at the Brookings Institution in Washington.

Li Peng was born on Oct. 20, 1928, in Shanghai to Communist parents. His father, Li Shuoxun, was executed by Chiang Kai-shek’s Nationalists in 1931 after he was captured on the southern island of Hainan, where he had been helping to organize Communist forces. Li Shuoxun became an early martyr of the revolution.

The rising Communist leader Zhou Enlai and his wife, Deng Yingchao, met young Li Peng and took him under their wing, as they did dozens of others. The boy was sent to study in the Communist redoubt of Yan’an, in central China.

In 1948, the party sent him to study at the Moscow Power Institute, where he became a leader of Chinese students in the Soviet Union. He remained in that country through the Communist victory in 1949 and Zhou’s appointment as prime minister of the new People’s Republic.

Mr. Li did not return to China until 1955, when he started his career managing hydroelectric plants. In 1966, as the tumultuous Cultural Revolution began, he was transferred to Beijing, where he served as a manager and party secretary of the Municipal Power Supply Bureau.

Despite his higher education and close ties to the Soviet Union, which by then was China’s archenemy, Mr. Li seems to have survived the decade of Mao’s Cultural Revolution without being persecuted or sent to the countryside to be re-educated, as many intellectuals were.

Many attribute his good fortune in those years to the patronage of Zhou, whose wife had helped look after the young Mr. Li when he was growing up in Yan’an. In his official memoir, Mr. Li refers to her as “Mama Deng.”

His rise after Mao’s death in 1976 was rapid. Mr. Li became national minister of power industries in 1981, was appointed to the Central Committee of the Communist Party in 1982 and then in 1985 joined the Politburo, a council of high officials. His increasingly trusted status was affirmed that year when, with enmities between the Chinese and the Soviets easing, he represented China at the funeral of the Soviet leader Konstantin U. Chernenko. Mr. Li was the first senior Chinese official to meet the new Soviet leader, Mikhail S. Gorbachev.

In 1987, Zhao Ziyang was appointed general secretary of the Communist Party, the country’s most powerful official position. Mr. Li was appointed acting prime minister and named to the five-man standing committee of the Politburo, setting the stage for the clash of wills and beliefs that would result in Mr. Zhao’s downfall amid the upheaval in the spring of 1989.

With his unwavering prosecution of the crackdown that had been sought by Deng and other elders, Mr. Li might well have assumed that he would be given the top job of party general secretary. But Deng, who had shrewdly pulled strings in secret, apparently concluded that Mr. Li was too unpopular at home and abroad to help the country recover from Tiananmen Square. He also may have suspected that Mr. Li would be too slow to unleash the economy.

Instead, Deng arranged for Jiang Zemin, the Shanghai party chief, who had managed to disperse student demonstrators with little violence, to take the job as general secretary. But even if slighted, Mr. Li remained prime minister and the second-most-powerful official in the Communist Party, a conservative balancing figure within a leadership eager to project unity.

“Li Peng was the fall guy for Tiananmen, and that’s why he didn’t get the general secretary job,” Rod MacFarquhar, an expert on Chinese politics at Harvard, had said of Mr. Li. (Mr. MacFarquhar died in February.)

Bao Tong, who was a senior aide to Mr. Zhao, the party’s general secretary in 1989, said that Mr. Li would be remembered for two controversial deeds: helping extinguish the pro-democracy protests and vigorously supporting construction of the Three Gorges Dam. But Mr. Bao, who was ousted in 1989, said Mr. Li’s role in the Tiananmen crackdown was as a loyal adjunct to Deng.

“He was a soldier for Deng Xiaoping, a pawn in a chess game,” Mr. Bao said by telephone on Tuesday from his home in Beijing. “Some people believe that June 4 was the outcome of him misleading Deng Xiaoping, and he led Deng Xiaoping into making mistakes. But I think that’s overestimating Li Peng. He was following Deng Xiaoping.”

To this day, publicly challenging the official account of what became known as the June 4 Massacre of 1989 is a political taboo in China and can lead to detention. But many liberal-minded Chinese hope for an eventual honest reckoning and an official reversal of the verdict — so vigorously promoted by Mr. Li — that the student demonstrators were actually tools of China’s enemies.

If that happens, Mr. Li is not likely to fare well in Chinese history books.

But the official tribute to Mr. Li — at a time when fervent protests against Beijing’s rule are underway in Hong Kong, the semiautonomous Chinese territory — indicated that China’s official position on 1989 remained unchanged.

“Comrade Li Peng took a firm position and together with the majority of comrades in the Politburo adopted resolute measures to halt the turmoil and quell the counterrevolutionary rebellion,” Xinhua said.

It said his actions had “played an important role in a great struggle concerning the fate of the party and the country.