Source: The Guardian (7/16/19)
Hong Kong showed China is a threat to democracy. Now Europe must defend Taiwan
By Anders Fogh Rasmussen
Beijing is bullying another democratic neighbour. The EU must stop ignoring authoritarianism for the sake of stability and cash 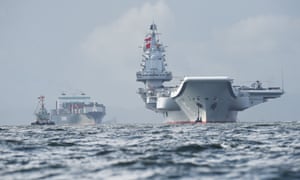 Hong Kong’s administration has backed down over the controversial extradition bill, but the canary in the coalmine of China’s tacit acceptance of democracy is already dead.

Under China’s “one country, two systems” model, Hong Kong was given the guarantee that the freedoms of its citizens would be preserved and respected. Meanwhile, for a long time in the west, the consensus was that, as its economy grew, China would start to look more like Hong Kong. Regrettably, in recent years the opposite has happened and Hong Kong looks more like China by the year. Perhaps we were naive to believe that this erosion of Hong Kong’s democracy was not inevitable. Beijing makes no secret of its view that democracy and Chinese civilisation are incompatible. The protesters in the streets of Hong Kong would beg to differ, and I hope they succeed through peaceful means.

For democracy activists in Hong Kong and beyond, there is a shining city on the hill: Taiwan. It is the one clear example of a Chinese liberal democratic project that has thrived in recent years. It should come as no surprise that it has faced intense pressure from Beijing.

In the South China Sea, China is strengthening its military presence. Its violations of Taiwanese air and sea space have escalated to dangerous levels. Beijing’s hostility towards Taipei has intensified since 2016, when Taiwan elected a president who defends Taipei’s sovereignty. It has stepped up its aerial missions violating Taiwanese airspace, sailing warships near or in Taiwanese waters, with the most recent example in June when China’s aircraft carrier passed through the Taiwan Strait. Taipei is also seriously concerned about Chinese interference in Taiwan’s presidential election next January.

To date, Europe has been erratic in its dealings with China. Several states have been eager to jump into bed with Beijing and auction off our democratic values for the promise of a boost in investment. They have turned a blind eye to Beijing’s human rights abuses at home and bellicosity in its neighbourhood. Meanwhile, other states see China’s continued authoritarian drift but shrink in the face of its global bullying.

The European Union regularly argues that its foreign policy is based on values, not just short-term interests. If this is the case, we should stand up for these values and defend the largest Chinese democracy from authoritarian pressure. The United States is leading by example, including the recent decision to sell military equipment worth more than $2bn to Taipei. 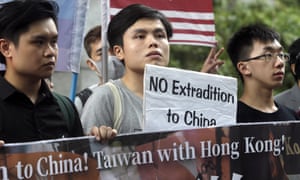 In Europe, however, China bullies capitals into accepting its warped viewpoint that Taiwan is just a rebel province. It forces us to deny Taiwan’s access to international forums and feigns outrage if any European politicians meet democratically elected representatives of the Taiwanese people – a country with a population almost equal to that of Australia.

The new EU leadership should change this approach, and make a stand for democratic self-determination. It should start by meeting Taiwan’s leaders, and moving forward with an investment partnership; and it should no longer be silent when China takes an aggressive posture. Until we do, the EU’s claims to be basing foreign policy on values is a statement that rings hollow.

Our defence of democracy abroad matters for our security at home. Europe’s current debates around China relate to potential security threats – from questions about Huawei and its role in building 5G, through to Chinese one-way investment in Europe’s strategic crown jewels. We want China to offer opportunity and be a partner, but its nationalistic shift gives us cause to worry about its real motives, underpinned by a totally different set of values.

This is why Europe’s stand for our values matters. It is not some abstract discussion about what happens halfway around the world, but the maintenance of a rules-based global order which has kept relative peace, spread prosperity and built free societies.

The people of Hong Kong want more democracy. They will have to win it for themselves. But Europe cannot continue turning the other cheek for the sake of stability and Chinese cash, while people seek the rights that we insist on for ourselves. Yes, China is rich and powerful, but it will only rewrite the world’s rulebook if we allow it to – starting by dismantling democracy on its own doorstep.

We should stand up for Taiwan’s self-determination and treat it as a fully-fledged member of the alliance of democracies. In a globally interdependent world, failure to defend our values in east Asia and beyond will eventually lead to the erosion of those same values at home.