Source: NYT (7/5/19)
For Hong Kong Celebrities, Supporting Protests Comes With a Cost
By Daniel Victor, Amy Qin and Tiffany May 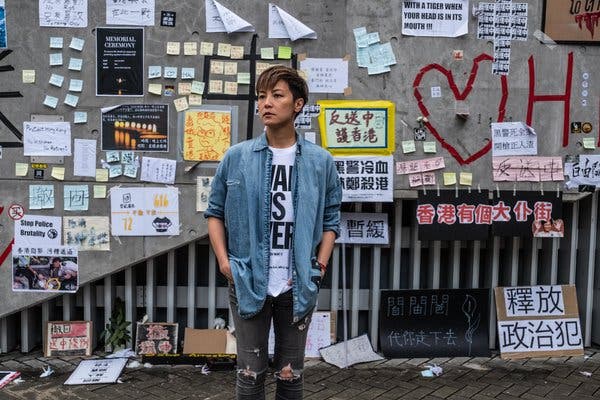 The singer Denise Ho outside the Legislative Council building in Hong Kong last month. She has been blacklisted in China since throwing her celebrity behind Hong Kong’s pro-democracy movement five years ago.CreditLam Yik Fei for The New York Times

HONG KONG — As Hong Kong’s protests evolve into a struggle against the grip of authoritarian China, one of the city’s biggest pop stars has emerged as an icon of defiance. She has spoken at rallies, handed out voter registration forms at marches and stood on the front lines with demonstrators, urging the riot police not to charge.

Denise Ho, a Cantopop singer, is just one of many high-profile figures in the decentralized protest movement, but among Hong Kong’s celebrities, she is a rare breed. Ms. Ho threw her stardom behind the city’s pro-democracy movement five years ago and has since been paying the price — being barred in the lucrative mainland Chinese market.

Ms. Ho defended the recent protests after Monday’s destructive turn when a core group of younger protesters stormed the city’s legislative offices. That day, Ms. Ho left a peaceful march to join a crowd outside the complex that was cheering on the students, and was still there after midnight when hundreds of riot police officers moved in to disperse them, with some firing tear gas. In 2014, Ms. Ho’s career had been taking off in China, and she had played more than 100 concerts there. Then she took part in a protest movement in Hong Kong that called for freer elections in the semiautonomous territory.

The Chinese government barred her from performing and scrubbed her music from the playlists of streaming websites. The blacklisting cut around $120,000 from her annual income, her manager said. 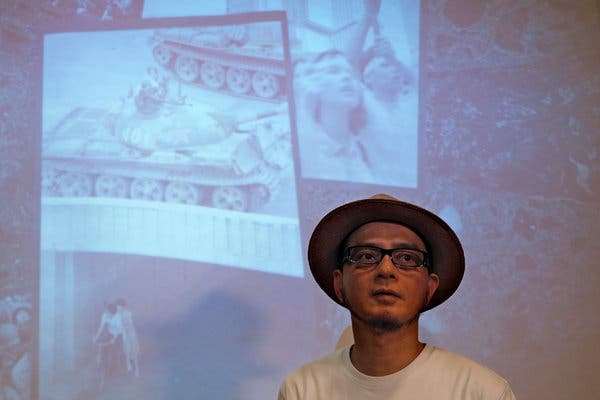 The Cantopop singer Anthony Wong Yiu-ming is one of the few established artists who spoke out against the extradition bill.CreditKin Cheung/Associated Press

The ban only emboldened Ms. Ho, reminding her of the need to protect the freedom of speech and other civil liberties that set Hong Kong apart from the rest of China.

“For me, it is always about the people, for the people to be empowered and for them to believe that we can control our destiny,” she said in a recent interview.

But for other celebrities, whose careers have come to depend on the mainland Chinese market, Ms. Ho’s punishment served as the latest warning from the governing Communist Party that it has a low tolerance for political dissent. Most stars stay out of politics. Others have chosen to support Beijing, and have been rewarded.

“Most of these people have stayed silent,” said Ms. Ho, who has livestreamed her appearances at demonstrations, including one in which she appeared to be shoved by a police officer. “It gets really frustrating and of course lonely for the people, especially for the younger people.”

[Here’s what to know about Hong Kong’s evolving protest movement.]

From her privileged perch, Ms. Ho has given voice to Hong Kongers’ grievances across the world, speaking at the Oslo Freedom Forum, writing op-ed pieces and giving interviews. She is scheduled to speak to the United Nations Human Rights Council in Geneva on Monday.

Yet few among Hong Kong’s performers have made public appearances at the huge protests of recent weeks against a bill that would allow extraditions to China. 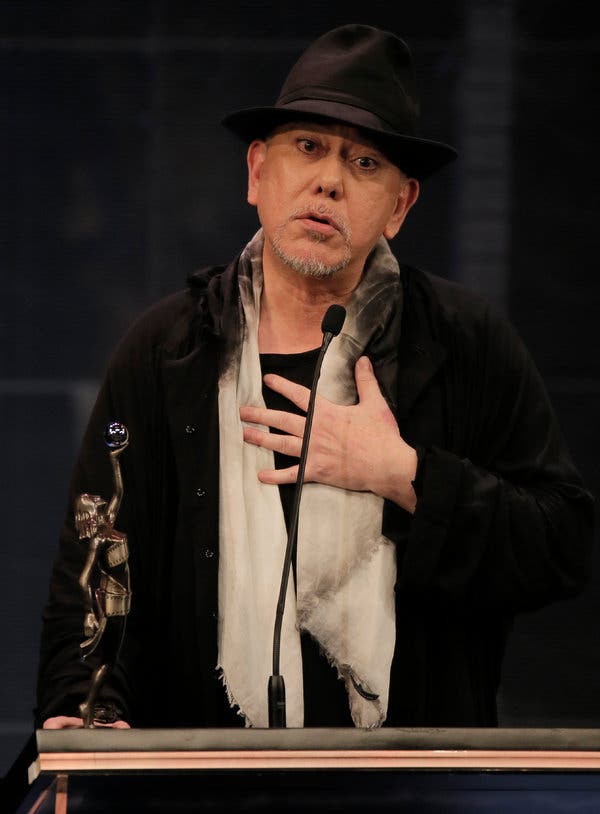 It is a stark contrast to 1989, when Hong Kong was still a British colony in the midst of a golden era of entertainment and there was little in the way of a mainland Chinese market. That year, a star-studded list of Hong Kong entertainers turned out for a concert to support the pro-democracy student protesters in Beijing’s Tiananmen Square. Jackie Chan performed, and the actors Andy Lau and Chow Yun-Fat called in to express their support.

In recent years, as nationalist sentiment in the mainland has grown and the economy has rapidly expanded, the authorities, companies and fans have frequently shunned performers who take stances that are seen to be critical of Beijing.

Aside from Ms. Ho, others blacklisted after the 2014 protests, known as the Umbrella Movement, reportedly also included Mr. Chow and Tony Leung Chiu-wai. Some stars found themselves shut out by fans and companies in the mainland. Job opportunities suddenly evaporated.

However, other than Ms. Ho, only a handful of individual entertainers, including the actor Anthony Wong Chau-sang and the Cantopop singer Anthony Wong Yiu-ming, have spoken out.

Some entertainers who only hinted at their support for the demonstrations have come under pressure to clarify their positions. 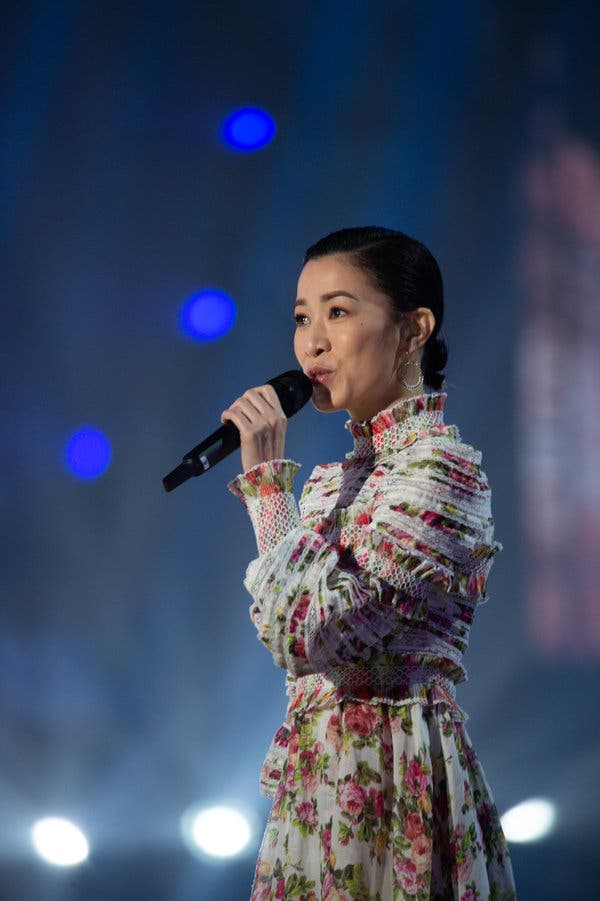 Miriam Yeung Chin-wah, a Hong Kong actress and singer, posted an image of the term “R.I.P.” on her Instagram, which many fans saw as a tribute to a protester who fell to his death last month. Ms. Yeung later deleted the post without explanation, prompting a wave of criticism from fans who accused her of bowing to mainland pressure.

Charmaine Sheh, a Hong Kong actress popular in mainland China, was subjected to a barrage of online attacks after she “liked” a post showing the anti-extradition protests on Instagram, which is blocked in China.

Ms. Sheh apologized soon after. “I was shocked when I later realized what was in the post,” she wrote on a Chinese social media site. “I, Sheh Sze-man, love the country and love Hong Kong!”

A few stars such as the actor Tony Leung Ka-fai and the singer Kenny Chung have publicly supported the police, whom protesters condemned for using excessive force when dispersing crowds.

“It’s a bit dangerous for us to come out today as public figures,” Mr. Chung said at a pro-police rally on Sunday. “But we are not speaking about politics — we are talking about justice.”

Others have pleaded ignorance.

Jackie Chan, the Hong Kong-born actor of “Rush Hour” fame, was in Taiwan to promote a new album last month, days after hundreds of thousands of people held a protest in Hong Kong to oppose the bill. When reporters asked about his views on the demonstrations, Mr. Chan said he had only just learned about them. 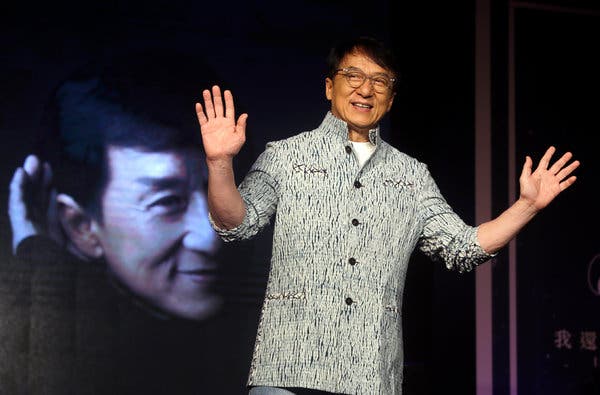 Jackie Chan, who was in Taiwan to promote a new album last month, said of the Hong Kong protests, “I don’t know anything about it.” Credit: Chiang Ying-Ying/Associated Press

“I don’t know anything about it,” he said.

Anthony Wong Yiu-ming, 57, the Cantopop singer, is one of the few established artists who spoke out against the extradition bill along with Ms. Ho. He came out as gay in 2012 and said the experience encouraged him to break the industrywide silence about politics.

“I am a civilian first,” Mr. Wong said in a telephone interview, “then a musician and also a social activist.”

But speaking in support of the Umbrella Movement, which Beijing criticized as a national security threat, came at a high cost. Mr. Wong said he had lost more than half of his annual income that came from China, as well as partnerships with international brands.

“I’ve been singing for 30 years and I can afford to pay this price,” he said. “A lot of people would then become too scared to speak up or express themselves. This is the most chilling part of it.”

Ms. Ho said that choosing to speak out had been liberating. “I am feeling quite free,” she said.

On Friday night, the singer spoke to a rally of several thousand protesters and urged them to persevere despite the arrest of several demonstrators.